Nikon has expanded its 1 system line with a new flagship model, the Nikon 1 V3. The Nikon 1 V3 follows the Nikon 1 V2 announced in 2012, and arrives with a revised design and a number of significant improvements on the inside.

The model debuts a new 18.4MP sensor – the highest pixel count so far for a 1-system model – and is also the first to employ Nikon’s Expeed 4A processing engine. Together they allow the camera to shoot at sensitivities between ISO 160-12,800 (equivalent). The camera is also the first in the range to include built-in Wi-Fi.

Many other improvements concern the camera’s video functionality. The Nikon 1 V3 can shoot full HD video at up to 60fps, and can even capture a full-resolution still image during recording. Slow- and fast-motion modes are also on hand, with the latter playing back footage at four times the captured speed.

With regards to its focusing system, the camera offers a hybrid AF system which combines 171 contrast-detect AF points with 105 phase-detect AF points. Autofocus is also maintained during burst shooting, which can be set to up to 20fps.

Around the back, Nikon has equipped the new model with a 3in display. Not only can this be pulled away from the body and angled to suit the shooting conditions, but it’s also sensitive to touch.

There’s no viewfinder on the body itself, although a new DF-N1000 electronic viewfinder with a 2,4million-dot resolution can be fitted inside the camera’s hotshoe. This hotshoe can also accept other accessories such as flashguns, although a small, pop-up flash has also been integrated into the V3’s body. 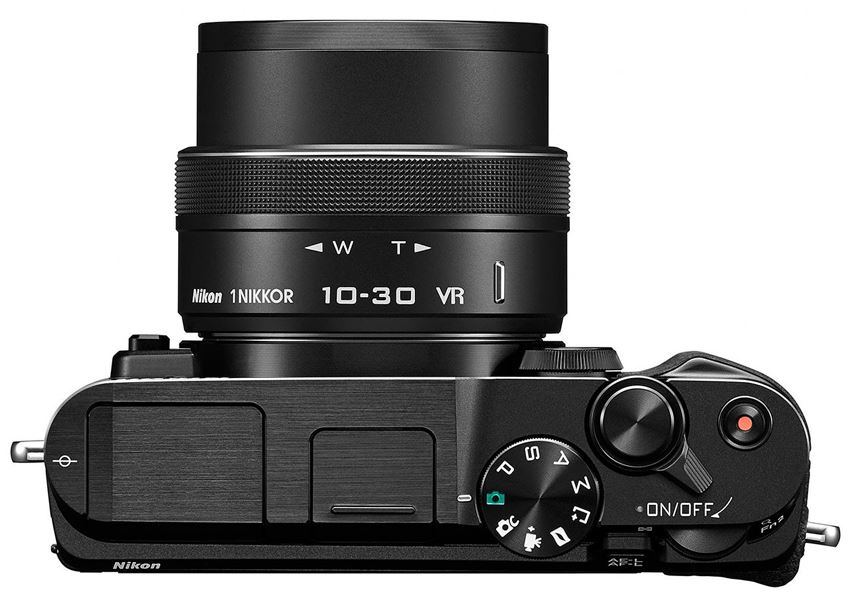 Another change from previous models is that all images and videos are now stored on microSDHC/SDXC memory cards rather than the standard SD alternatives, something which has helped to keep the camera’s size down.

Nikon has also announced a pair of new optics alongside the new model, with one of these being the 1 V3’s official kit lens. The 1 Nikkor VR 10-30mm f/3.5-5.6 PD-Zoom is said to offer a better optical performance than the current 10-30mm f/3.5-5.6 VR kit lens, and boasts a completely revised construction which brings its size closer to that of a pancake lens. It also incorporates a Power Drive zoom dial, which moves the lens electronically rather than mechanically. The other new lens is the 1 Nikkor VR 70-300mm f/4.5-5.6 which offers a focal range equivalent to 189-810mm in 35mm terms.

Nikon announce the J1 and V1