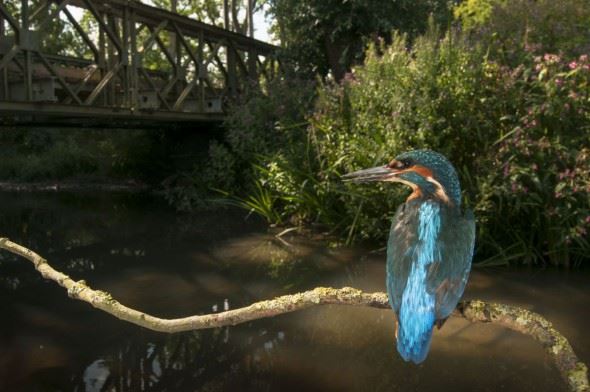 As they’re among the UK’s most iconic birds, kingfishers are always a hit with photographers. Wildlife shooters can often be found travelling many miles to get a shot of these little blue and orange beauties!

Even though I’d had kingfishers essentially on my doorstep for many years, I had always been a touch disappointed in my efforts, with my shots never quite reaching the level of what I was truly after. So last year I pulled on my photographic thinking cap and set to work, deciding I was going to capture a unique and different kingfisher image.

In order to create something different, you need a plan. Not only to get the shot in the moment, but also in the early stages, to help you focus and develop your photographic vision.

With kingfishers being such a well-documented subject, finding inspiration isn't hard. There are so many fabulous shots out there, which in turn creates a problem,. How do you get something different?

We’ll come back to that later. Firstly, we need to know our subject, because before you can even start creating images, you have to actually find the birds!

Kingfishers are territorial creatures, found along most river courses in the UK. They tend to favour slower moving sections of rivers with overhanging branches, as these provide good fishing. They also require steep mud or sand banks in order to nest.

Kingfishers are protected by law – you need to be careful in the summer months not to disturb them by a nest (to photograph near one you require a licence). However, away from a breeding spot or during the winter months, feeding spots provide ample photographic opportunities.

Being thoroughly familiar with the landscape of my chosen location, I knew roughly where to look, and after a few days scouting out the river course, I pinpointed a couple of spots to get to work with.

Shoot one was all about getting some images in the bag.

Heading down to one of the spots where I’d been seeing the kingfishers regularly, I set about bagging some easier shots.

In order to get the setup exactly how I wanted it, I pulled on my waders and set up my own perch in the water. With any luck, the kingfishers would choose to perch on it, giving me the chance to grab a couple of nice shots. When setting up a stick, you’ll want it to be roughly three feet above the water, over a slow moving section of river. Try and position it in a way that means any background clutter is far away, minimising distractions.

With my stick in place, I set up my shooting position eight or so feet away, pulling a bag hide over myself to conceal my position. The hide would act as a way to disrupt the outline of the human form, reducing the apparent threat. 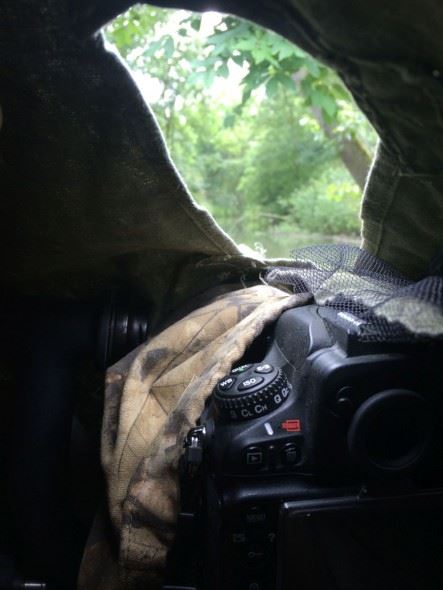 The view from inside my bag hide

With that done, it was time to wait… and wait… and wait, until eventually a kingfisher flew downstream to inspect my newly positioned perch!

Over the next couple of days, I managed a number of simple shots and was reasonably happy with my starting point for the images: simple and clean, but in all honesty, nothing to write home about! 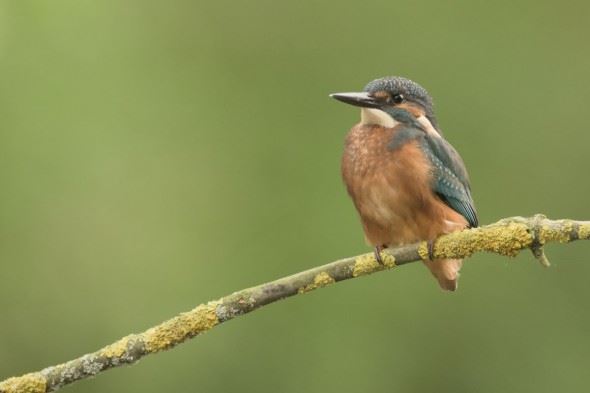 By chance I was walking back after a day’s shoot, when I spotted a kingfisher sitting under a small metal bridge over the river. Made up of cross metal rods and bars, the bridge offered a totally different look to the “natural” perch I had been working on over the last few days.

Setting up close to the bridge I had a wonderful view straight under, and with the light coming from behind in the early morning, I hoped it would be perfect for some silhouetted, urban-style kingfisher images.

The first morning passed with nothing really worth noting, but on the second day sitting by the bridge, I finally had the chance to make some images. The kingfisher perched below the bridge, feeding, for more than an hour. Each time he settled on one of the small rods, giving me a perfect view.

Underexposing heavily, I rendered him completely as a silhouette, hoping to convey the presence of a kingfisher without the normal attributed colours that are a dead giveaway of these stunning birds. I wanted to try and show the more subtle nature of their behaviour, how they are often found deep in shadow, quietly waiting in order to score a meal. 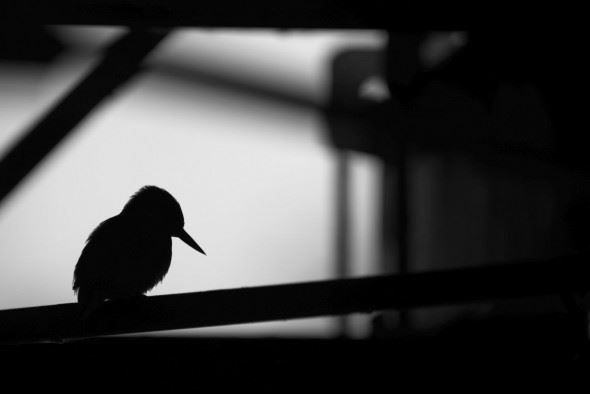 Under the bridge for an urban image, backlit for a simple and different composition

Spurred on by the project’s development, I started to think further about how I could build upon my portfolio for another unique angle.

After having worked with my longer lenses for the first few weeks, I wanted to try and get far closer to the action for a more intimate wide-angle view of the kingfishers in their environment.

Still wanting to work with the bridge, I positioned a new stick in place, framing up so that the bridge would be in the background. This would give that sense of the urban interaction I’d gotten in Stage Two, while still showing the natural river. Using my hand to roughly gauge the distance, I worked out that that camera with a lens set to 24mm would need to be five inches from the birds and stick in order to get the shot I was after.

Due to the length of time I knew it would take for the shot to come together, I decided to work with a remote camera in conjunction with an infrared sensor to get the image. This would allow me to leave the setup in the river for weeks at a time, ready and waiting for the kingfisher to settle in the perfect position.

To do this, I needed to firstly work with Aperture Priority mode (as the conditions would be changing) in conjunction with off-camera flash to get the perfect and consistent exposure.

Dialling in a -2EV underexposure on Aperture Priority, I knew that the whole scene (most importantly the background) would be underexposed, reducing the likelihood of any blown-out highlights in the sky. Of course, once I’d done so, my subjects in the foreground would be awfully dark. This was where the flash came in…

I used two flashguns manually powered to 1/16sec and 1/32sec, the first primary light firing through a small softbox and the second as a small fill. Through this setup I created a simple, natural-looking lighting arrangement for the stick. A few test exposures later and the image was looking good. 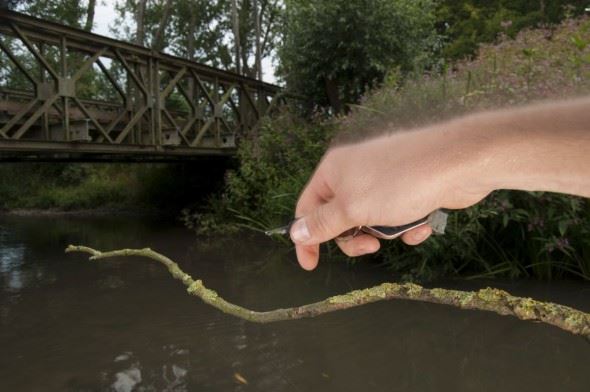 Testing the exposure to get the settings right

Next on the list was the motion sensor. As I would be leaving the setup, I needed it to trigger when the birds were in position, so I rigged up a passive infrared sensor on top of the camera’s waterproof housing, pointing down towards the stick. Using some gaffer tape and pieces of flexi plastic, I fashioned a cone to narrow the beam so that it would only trigger the camera when the birds were exactly where I wanted them.

With everything working, it was time to waterproof the lot, using a mix of freezer bags, cable ties and elastic bands, as well as a specifically designed and drilled-out pelican box for the camera to be housed within.

Everything sorted and weatherproofed, I packed up my bag, placed my hand in front for a final test image, and then walked away, hoping that on my return the card would be full of awesome wide-angle kingfisher images!

You may or may not have noticed that in England it rains. A lot. In many ways I’d forgotten this (with it being the summer) and had concluded that my weatherproofing would keep my camera safe from the elements. How wrong I was!

After three days of continuous rain (which coincided with when I happened to be away), water levels rise. I had left my camera standing in a foot and a half of water, and I came back to find it swamped in over five feet. The swollen river had risen quickly as the catchment had emptied, and as I stood on the bridge, I could dimly make out my camera, in the water, just about being held in place by a dogged final clamp.

The pelican housing was fully underwater, and even though it was built to withstand the elements, being held under the river was far too much for it. When I opened the latches, water spilled out, my camera swamped by the dirty river water.

It certainly wasn't the best start to the week. 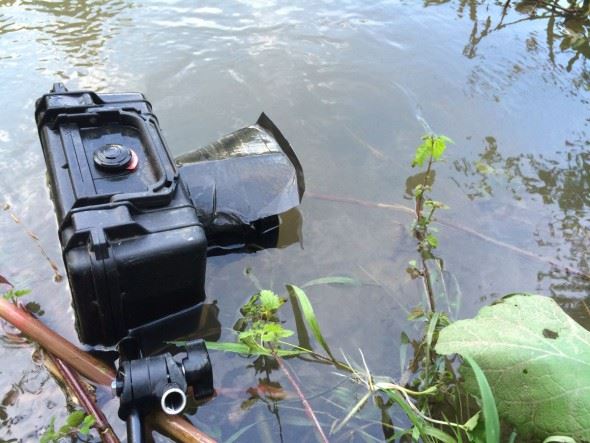 A DSLR, two flashes and sensor down, the image really had to be special now to be worth it all. Still, being determined, I pulled out another one of my cameras, two more flashes and ordered another trigger to rig the whole thing back together. Staying in the local area whilst everything was in position this time, I monitored the weather closely hoping not to lose another setup to the water! 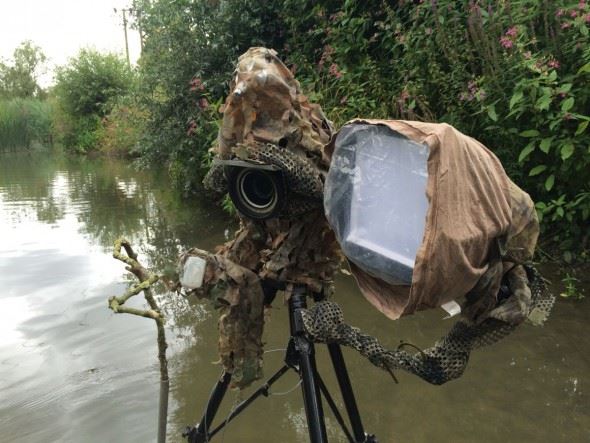 Setup Mark II – using a far sturdier tripod, a little higher out of the water

After two weeks in the river, it was time to check up on things, bringing along fresh new batteries to keep everything working. Wading into the river, I placed my hand in front of the sensor to test my trap. Nothing.

Now, most times when working with a camera trap, when nothing happens it means something has gone wrong. The sensor has been triggered by something unexpected, the camera has been kept awake, or there’s been a simple malfunction. This time however, elation!

Looking through the images on the back of my camera, I found I had hundreds of shots of the kingfisher sat on the stick, perfectly where I wanted him. As I scrolled onwards, I saw I had caught two kingfishers on the stick, and then I nearly fell over in the river as I saw I’d finally bagged the shot. The male, passing a fish to his mate, framed up on the stick with the exposure just as I had envisaged. It doesn't get much better than that! 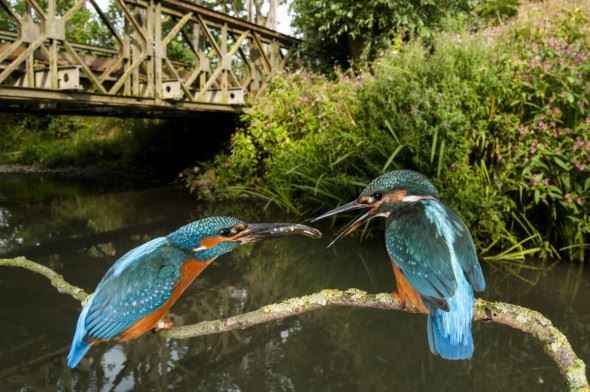 The final image. There are some shots you just can't predict – the two adults and a food pass, simply perfect!

After a few months of work, many long hours, and a stack of broken camera gear, it had finally all come together. The final image, different and unique, exactly what I was aiming for.

The icing on the cake was still to come. One year later, the image I caught became the opening double for BBC Wildlife Magazine! Truly an awesome feeling, as now thousands of people have been able to enjoy a close-up view of these small stunning birds of the British countryside! 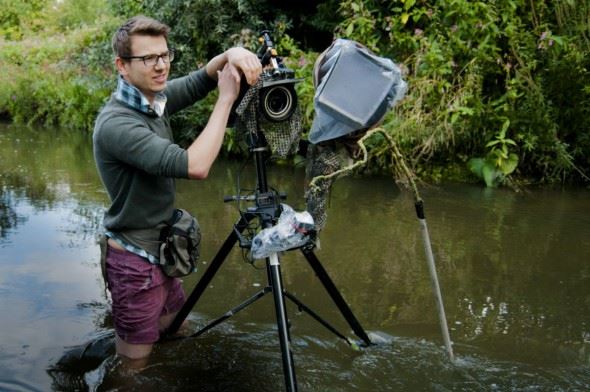 A shot of me preparing for the second attempt. Persistence pays off!