10 Scenes from a Photographic Tour of Chernobyl: Part 1 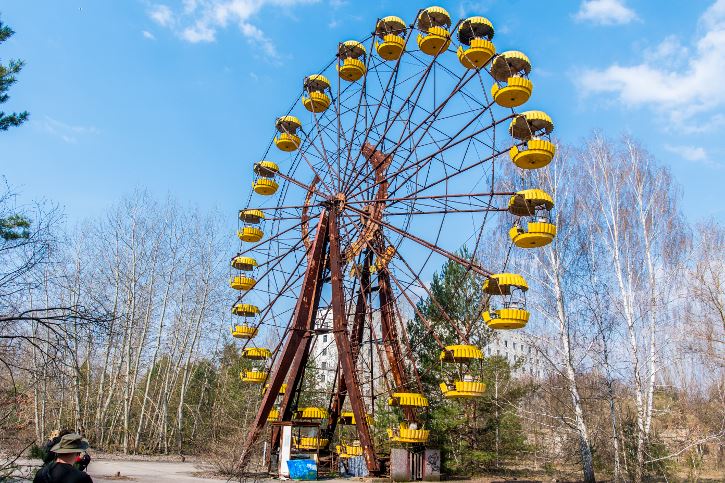 All images by Rich Broome.

Welcome to the second most radiated place on Earth. As both a region and a city (well, technically two cities: Chernobyl and Pripyat), Chernobyl is second only to the more recent 2011 Fukushima nuclear disaster in terms of decimated earth.

The entire trip started off as an observation between two friends. Every year, without fail, a torrent of photographers fly to Iceland and take photographs and quite frankly, I was bored of seeing it. To me it was unoriginal, uninspired and a bit overdone. It’s an expensive holiday and most people come back with the same plethora of images that have been repeated time and time again.

“I want to see someone do something different,” I was telling my friend and before long he had stumbled across a tour of Chernobyl via Facebook, which grabbed my attention. I genuinely had no idea you could visit Chernobyl without some sort of clearance, the type you only get if you work on TV.

So I talked it over briefly with my friend Chris and decided to share it with a photography group on Facebook, saying: “You lot all bang on about going to Iceland for a photographic holiday, why not do something truly different?!” Initially, my response wasn't taken seriously, but two days later someone commented: “So, are you serious about doing this?” and the rest, as they say, is history.

Everything fell into place almost instantly. We organised to have a private tour – for reasons I mentioned in my last article for Wex that photographers, by and large, can be a pain to travel with. It’s not fair on us if we have to accommodate non-photographers and vice versa. So, the best thing to do is to simply cut out the general public and have a group of dedicated photographers. Not only that, but the trip also had the potential to be a great opportunity to network and learn from others.

We set a budget for the whole trip, which included three days in Kiev, coming to £501 for flights, hotels, the tour itself and airport connections (we overshot by £1). Food and drink is so cheap in Ukraine, we didn’t factor it in. Kiev is beautiful. It’s worth going just to see the city, which is steeped in history and everyone is very friendly.

For the morning tour we are picked up in a pretty luxurious minibus – I was expecting something you might have rumbled around in if you were on the road with a band, but this was pretty smart looking. Within two hours we’re driving down a very long, straight and eerie road that leads to the checkpoint of the exclusion zone. This is the entrance to the thirty-mile radioactive perimeter that (by 1979) more than 50,000 people called home. Let that sink in for a minute… That is 20,000 more people than the modern-day population of Dover, which is one half of the busiest shipping lane in the world.

The road is lined either side in deep, dense forest. But, unlike any other type of forest you may have driven through, most of these trees are only partially covered in bark. From the base of each trunk to about halfway there is bark, but after that is bare wood.

We reach the first checkpoint, naturally, photos are strictly forbidden. Maybe it’s the brain playing tricks, but something feels very different. The ground rules are provided again as a reminder – do not touch anything, do not put anything on the ground that you wish to pick back up, do not roll up your sleeves – as the ominous beeps from the Geiger counters chirp slowly away.

The first stop is a small village called Zalissya, not far inside the exclusion zone, littered with dilapidated houses and a hall that blends almost seamlessly into the untamed forest. It’s immediately clear that the prior residents were by no means wealthy people.

Back to the bus and the next few stops present us with above-ground water pipes, light industry that still operates the “Welcome to Chernobyl” sign and a hand-sculpted memorial by the locals of the inspiringly brave first-responder fire fighters. These men unwittingly tackled the fire that spewed high-level radiation (which they had never been trained to deal with) but without whom reactor four would have released more than the small percentage of radiation that it did. That’s right – of the core that nearly brought Europe to its knees, only 10% leaked. And there were four reactors.

Next stop: Duga-1. This monstrous radar station was a Cold War secret and has only been open to the public since 2015. It’s a photographer’s dream in terms of compositions though; everything is uniform, the sun glistening through the beams and wires as you walk across the white, soft sand that surrounds it. From there you traverse through the lengthy computer rooms and corridors that were designed to monitor signals of ballistic missiles being launched, though never fully operational before the meltdown. 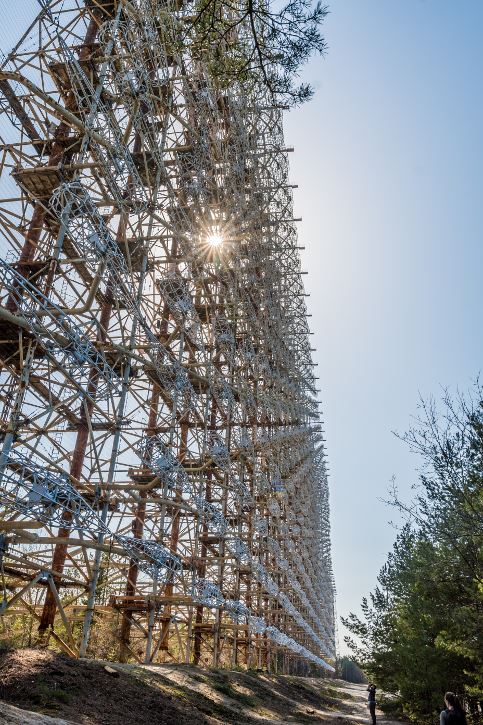 However, this is nothing in comparison to our following viewing point: the power plant. We pull up on the main road to the plant, just by the large meandering river that helps cool the reactors. Our Geiger counters beep more intensively, warning us that the air has a greater level of ionised particles as we look upon the ominous, looming sarcophagus that engulfs the fourth reactor. We were all shocked to learn that Chernobyl still ran the remaining three reactors at full tilt. They were operational right up until late 2000.

Now they’re being slowly decommissioned, which means the whole site is still very active with people. Perhaps the greatest surprise is how terrifyingly close together reactors three and four are. Scouring the landscape around us we see other cooling towers that are in mid-construction as there had been plans to build even more reactors during the seventies and eighties. These now stand incomplete, abandoned. We bundle back into the bus and drive towards the plant, looking on in awe, then past the fire station from where those brave men on site gave their lives trying to extinguish a nuclear fire. Next, we turn into the power plant’s train station.

A train station you ask? Yes, that’s right. This tour included an overnight stay in either Chernobyl or an outside city called Slavutych that was built exclusively for workers from the plant, which is where they were taking us. There’s one track in and out of the plant. As you can imagine, no one is allowed to leave Chernobyl without being scanned for radiation. It’s a rather strange experience – you stand in these scanners that measure you from top to bottom, from under your boots to your hair, your palms and your back.

We all pass through both scanners before boarding what can only really be described as an oversized underground carriage, alongside all these workers. I want to turn to everyone and ask questions but of course, a commuters’ train is a commuters’ train anywhere in the world; everyone tries to zone out with music.

It’s one of my two regrets from our trip that I didn’t photograph this part of the journey, and no one else did either.

Slavutych is an experience. It’s a concrete city that feels unfinished, very spacious despite it being very empty. We check into the hotel, freshen up and eat dinner, which is where I shall end this chapter...