Fujifilm’s X-T10 shares many commonalities with the existing X-T1 but there are many changes too. We dig deep to find out main differences between the Fuji X-T10 and the X-T1. 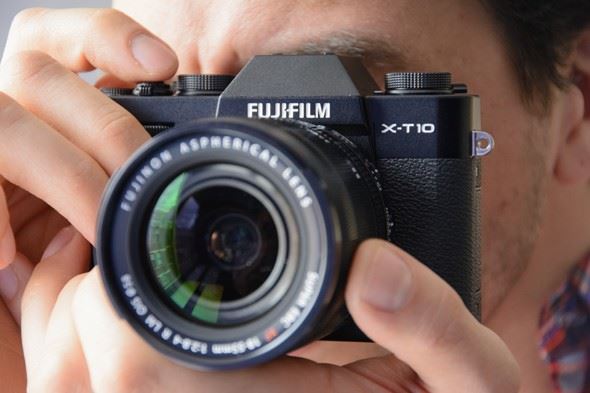 While the X-T1 comes with a detachable flash, the X-T10 has one integrated into the body itself. This is released by flicking a lever to the side of the drive-mode dial. 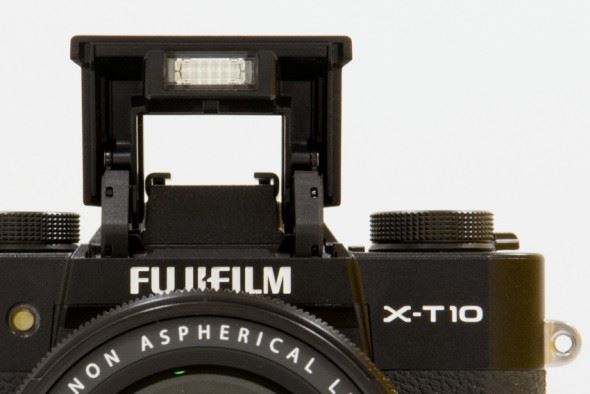 One of the more significant differences between the two models, albeit one which cannot be as easily appreciated as other changes, is that the X-T10 lacks the X-T1’s weather-sealed body.

The X-T10 sports an updated AF system, one that’s said to be faster that those in previous models and with a wider variety of options for tracking moving subjects. Furthermore, it also has the ability to detect eyes as part of its Face Detection system. All of this will, however, be made available for X-T1 users in a forthcoming firmware update. 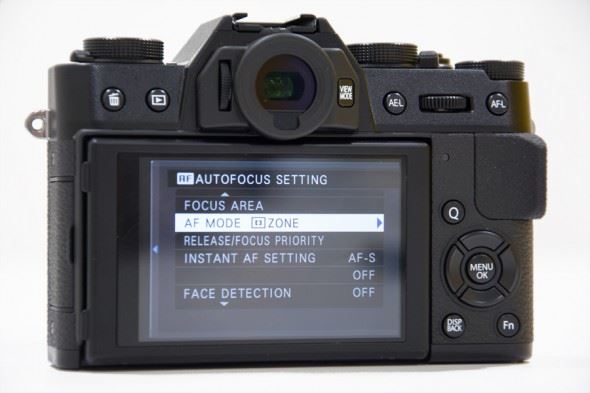 While the X-T1 bore an ISO dial above a drive-mode collar on its top plate, the X-T10 replaces these with a drive-mode dial. Control over ISO, therefore, happen via the Menu and Q. menu (and a function button of the user’s choosing if this is set up).

The X-T1’s metering-mode dial, which appeared beneath the shutter-speed dial on the X-T1, does not feature on the X-T10. It is, however, possible to change the metering mode on the new camera in a number of ways, either through the Menu, Q. Menu or by assigning it to a Function button. 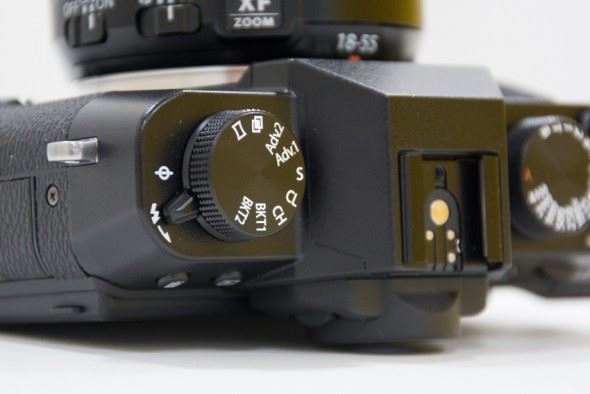 The X-T1 has one Adv and one Bkt option on its drive-mode dial, and to the X-T10, Fujifilm has added another of each.

Fujifilm’s electronic shutter, which was brought to the X-T1 via the aforementioned firmware update, is available on the X-T10 as standard. This joins the mechanical dial and allows users to capture images at a maximum shutter speed of 1/32,000sec. 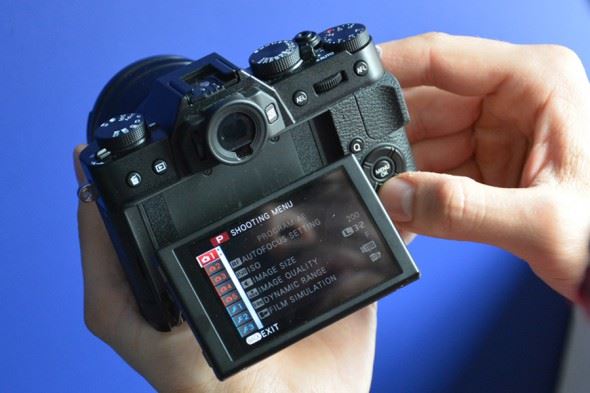 The locking button inside the X-T1’s shutter-speed dial does not feature on the X-T10, meaning the dial itself turns freely.

The design of the X-T10’s thumb rest has been revised from that on the X-T1, positioned closer to the edge and with a more defined shape.

The X-T10 follows the X-T1 in having a grip on its front plate, but it’s design is slightly different and not quite as substantial. 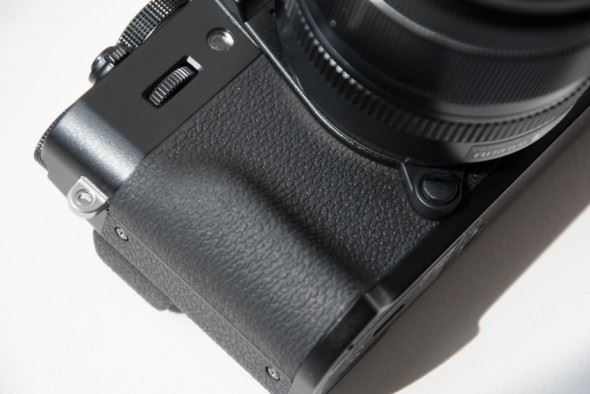 One of the more visible changes between the two models is that the X-T10 lacks the X-T1’s flash-sync socket on its front plate.

Fujifilm has not carried over the X-T1’s front-plate Function button for the new model and it has moved the Fn button on the X-T1’s top plate to the rear plate of the X-T10.

The X-T10’s flatter viewfinder chamber has forced the View Mode and diopter controls from its sides to the back. These now sit either side of the eyepiece. 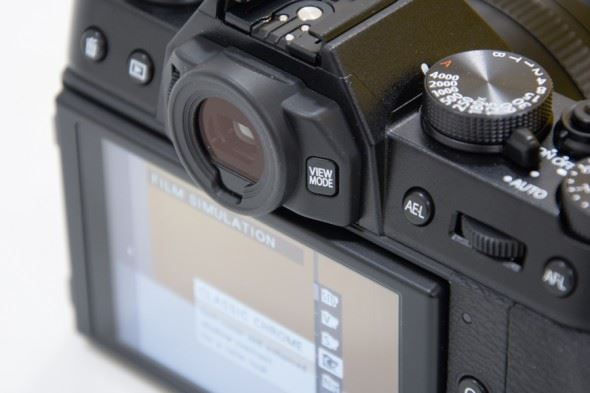 The X-T1 dropped the previously seen ISO option from its Quick menu and replaced it with Face Detection. As the X-T10 lacks a dedicated ISO dial, this has now reappeared here, with Face Detection no longer selectable via the Q. menu.

The X-T10’s shutter speed dial sits on top of a lever which switches the camera’s exposure mode between whatever you have it set to and Auto. So, if you have your lens set to ‘A’ and the shutter-speed dial set to anything other than the ‘A’ option (ie shutter-priority mode), you can quickly change from this to Auto with a flick of the switch. 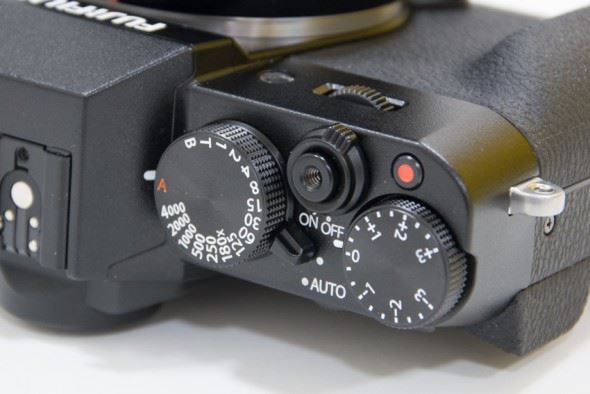 While the X-T1 only gained its Classic Chrome Film Simulation mode with its firmware upgrade, the X-T10 features it straight out of the box. 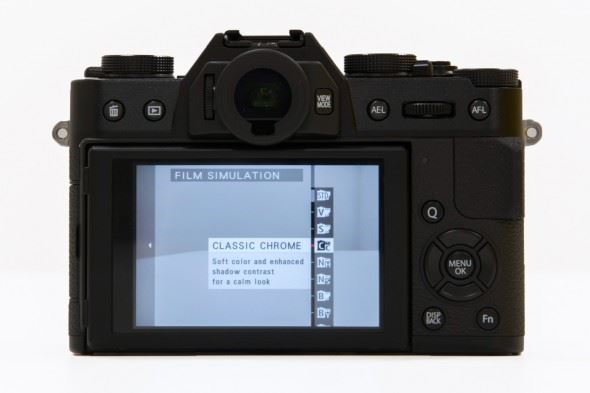 The X-T10’s Auto mode is equipped with a 58-pattern Scene Recognition system, which is said to choose the aperture, shutter speed and ISO suitable for the situation with which it’s presented.

The X-T10 can capture up to 8 JPEGs at 8fps, next to the X-T1’s 47 JPEGs at the same rate (depending on the memory card and the settings chosen). At 3fps, both cameras can capture JPEGs up to the capacity of the card in use.

Although both cameras accept SDHC and SDXC cards, the X-T10 has its SDHC/SDXC card slot in the camera’s battery compartment, which is accessed via a door at the camera’s base rather than through a separate side door as on the X-T1. This means the card slot cannot be accessed while the camera is mounted on a tripod.

While the X-T1 supports both UHS-1 and UHS-II types of SDHC and SDXC memory cards, the X-T10 only supports UHS-I types.

The status light which appeared in the X-T1’s thumb rest has now moved further towards the LCD on the X-T10.

As we would expect from a smaller camera, the X-T10 is also lighter by almost 60g, weighing 381g with a battery and memory card vs the X-T1’s 440g. 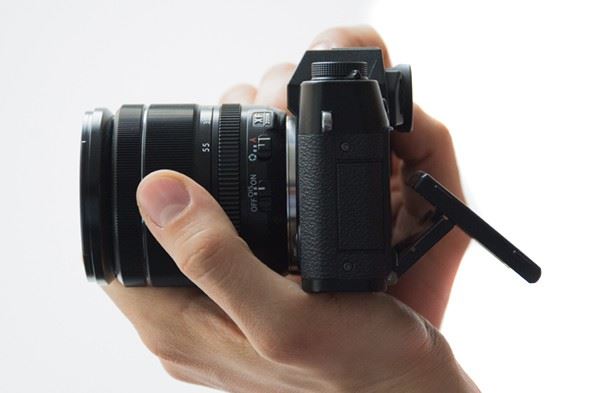