If you’ve read any of my reviews or lighting guides, you’ll know that I often use images taken by my photographer friend Chris Reeve. I’ve known Chris a long time and I hire his studio from time to time. Over the years I’ve watched his commercial photographic business grow from strength to strength. He’s a very talented photographer; always modest about his work and achievements - a refreshing change compared to some photographers I meet!

Chris has been in business nearly 20 years as a commercial photographer and shoots a wide range of catalogue, advertising and PR photography. His main love is architectural photography and he started his business with a handful of clients and built the business slowly but surely to where it is today. A few years ago he was joined by Clare Banks, his photographic partner who brought her own clients into the business and between them they now have a very extensive client base.

Chris and Clare have a studio in Coggeshall in Essex, kitted out mostly with Bowens lighting, as he does quite a lot of work for their brochures. He shoots in the studio a few times a week, but a lot of his work is on location. He often gets up very early when we are still asleep to capture a perfect sunrise over a building somewhere. In fact it was a location job that got Chris and I together a few weeks ago. I’ve been meaning to feature Chris in my "A Day in the Life of..." series, but we’ve always been too busy to get together, or Chris hasn’t had the right sort of job. So I was very pleased when Chris phoned me, asking me if I would like to go out with him to photograph a famous footballer.

Let me explain, Chris doesn’t shoot footballers for the fun of it, he shoots them for the Mitre sportswear company, Chris has been shooting the Mitre catalogue for the last couple of years. They sponsor various players and ask Chris to shoot them on location for the catalogue. Chris also spends a lot of time in the studio shooting footballs and all the other things that Mitre make and sell.

Chris told me that he was going to Fulham’s training ground to shoot Mark Schwarzer, their Australian goal keeper outside on the pitch using a Bowens Explorer Pack. "Right up my street" I thought, so we arranged to meet up for the day. The day started early at Chris’ studio, to pick up the Explorer pack and a few other bits and pieces, mainly accessories for the pack.

If you’re not sure what the Bowens Explorer is, let me explain. It’s basically a bigger version of the Bowens Travel Pak battery that uses Quad or as we used, smaller Mini heads, that plug into the Explorer battery pack. When we met at the studio, Chris collected one Explorer pack with a spare battery, two Mini heads, two head extension leads and some reflectors, Wide Angles, a Snoot and a pair of High Performance. Chris also checked his camera bag for the tenth time to make sure he had his favourite lenses, his 50mm 1.4, 85mm 1.4 and his 17-35mm 2.8 and his 180mm 2.8 and of course his Nikon D3 body.

We travelled down to Motspur Park in South London and arrived mid morning in time to meet Nikki from Mitre who had arranged the shoot. She was very nice and told us about Mark Schwarzer ‘the goalie’ and chatted to Chris about the type of shots she wanted. Chris had used the Explorer pack before to shoot for Mitre so he had pretty good idea about how he was going to shoot Mark. 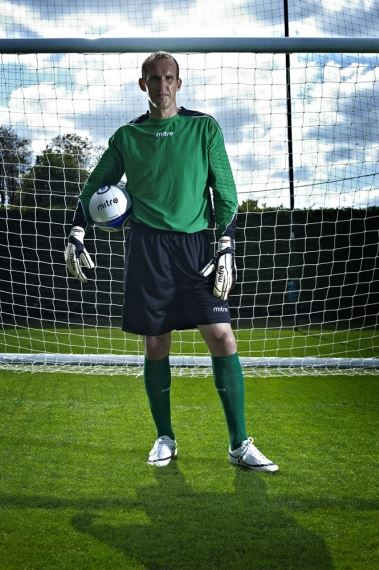 While we waited for Mark to finish his training session, Chris and I set up the Explorer pack and Mini heads in front of a goal post on one of the training pitches. Using the Explorer is very simple; the heads plug into multi sockets on the side of the pack. The sockets are numbered A & B and the power can be distributed between them. Like the Bowens Travel Pak, the Explorer doesn’t have a modelling lamp system, so while Chris armed himself with his Nikon D3 I took some meter readings, adjusting the power for each head to f.8. We then shot a series of test shots of me pretending to be Mark Schwarzer holding a football in front of the goal, not easy as I’m only 5ft 6", and Mark is well over 6ft! However the test shots that we took with the Explorer looked good despite the sun coming in and out behind wispy white clouds, changing the light from diffused bright to blinding sunshine!

When Mark finished his training session he came out to meet us on the pitc. What a nice guy! Mark was chatty and happy to help Chris get the shots he wanted and offered some suggestions of his own; he couldn’t have been more helpful.

Chris started with some straightforward shots of Mark in front of the goal holding a Mitre football. To begin with, Chris shot from low down pointing the camera upwards with the sun behind Mark to accentuate his stature, the angle worked really well and the shots looked superb. The Explorer heads were positioned in front and behind Mark, giving a rim light effect. To get this effect, the Mini head behind Mark was fitted with a Wide Angle reflector and Chris used a Snoot in front of Mark, pointing downwards. The power Chris used gave an exposure of f.8 at 100 ISO, shooting at 200th of a second. As Chris explained, shooting outside can be a nightmare because the light can change so quickly. Using the Explorer, or Travel Pak gives the photographer complete control over exposure. 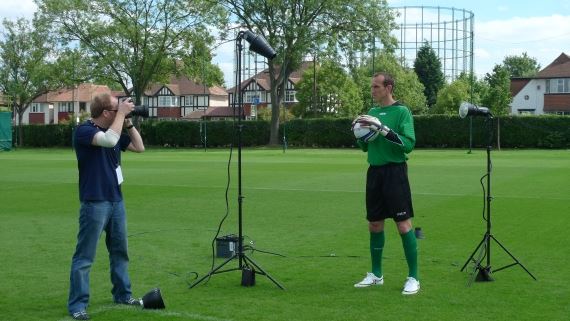 Chris then stood up in front of Mark to take these shots. As you can see from the images, Chris controlled the lighting to give a nice brooding effect, just what Mitre wanted. We used a similar lighting set up for these shots, also taken with Wide Angle reflectors and Chris’ 50mm lens.

Mark had suggested some action shots of him kicking and throwing the ball, both great ideas. So we repositioned the lights to shoot Mark taking a goal kick first. To do this we put one Mini head behind the goal and the other in front of him about 45 degrees to Mark’s left. Chris decided that lying down on the ground gave him the best angle for the shot, and I walked halfway down the pitch to try to catch the ball after Mark had kicked it. Well, let’s just say that it took a few goes to get everything right! The first few kicks that Mark took flew straight over my head and I found myself standing about a mile away to catch the next few! Chris meanwhile had worked out when to press the shutter, so a few ‘kicks’ later Chris got the shots he wanted.

To get Mark throwing the ball, we just moved the Mini head behind Mark into the corner of the goal and left the other Mini head where it was. Once again I walked halfway down the pitch to catch the ball while Chris knelt down to take the shot. This fantastic shot was taken with Chris’ 17-35mm.

To finish off the shoot, Nikki from Mitre wanted some shots of Mark wearing some new gloves and trainers. After a quick chat, Chris and Nikki decided to shoot Mark sitting on the pitch in front of the goal. We adjusted the lights a little, still one Mini head behind and the other in front of Mark, but this time using a combination of Wide Angles reflector and Bowens High Performance reflectors that give an even light over a much larger area. Chris used his 180mm to shoot this series.

Mitre wanted to keep the same type of style and look to all the images, and this could only be achieved using the Explorer, without it, it would have been very difficult to match the lighting because the daylight was so inconsistent that day . As I said before the sun was very strong, but there were also big clouds blowing over making the light change dramatically every few minutes.

It had taken us about three hours to get everything done, and when Nikki was satisfied that Chris had taken every possible shot she needed, she was happy to let Mark go. Mark was a great subject; he was very motivated and really contributed something to the shoot. I helped Chris pack away everything into his little Mini, (well it is an estate) and I made my way home. We got together a few days later to look at all the images Chris had taken and both he and Mitre were very pleased with them. I hope the you like the small selection here that Chris chose to illustrate this article.

I get asked a lot of questions about shooting outside with flash, how it’s done and how to get the best results. So for those of you with Bowens Travel Paks I hope that these great images of Mark Schwarzer inspire you to take your kit outside and see what you can do. Why not send me a low res image of your best shots and I’ll feature them on the web site?

Chris Reeve has a great web site featuring his award winning photography, why not give a look.

My thanks to Chris Reeve and Nikki from Mitre and of course Mark Schwarzer himself for his time and patience.

Read Steve's 'A Day in the Life of...' piece on Nik Keevil, Book Cover Photographer.