A little about Comet ISON

Comet ISON’s imminent arrival has created much excitement in the astronomical community. Tammy Plotner, President Emeritus of Warren Rupp Observatory, looks at why this is.

Discovered on the 21st September 2012, by Artyom-Kislovodsk and Vitaly Nevsky using the International Scientific Optical Network’s (ISON) 0.4 meter reflector, Comet 2012 S1 ISON has probably been one of the most widely discussed Oort Cloud visitors for a long time, posing many questions. Will it be as bright as expected? Will it break up? With questions and controversy abound, the sheer joy of having a comet to observe should eclipse all the talk. So why waste an opportunity when you could be out there checking it out, learning a little more about this Oort Cloud wanderer?

There is, it should be said, reason for this heated discussion. Since it was discovered outside Jupiter’s orbit just a little over a year ago, ISON has displayed a lot of activity for a comet so distant from the Sun, leading researchers to believe this “Sungrazer” may put on a brilliant display as it becomes intensely heated during its solar pass. This, and the potential of being visible in the daytime, lead some in the media to dub ISON “Comet of the Century”. Others in the scientific community, meanwhile, frustrated by the hyped-up media coverage indicative of 24hr rolling TV news coverage, believe ISON may in fact break up before reaching perihelion, proving to be a damp squib and damaging amateur astronomy by giving false or mis-represented expectations. 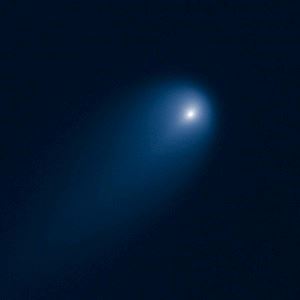 On June 13 2013, astronomers used the NASA Spitzer Space Telescope’s on-board Infrared Array Camera to examine what might be carbon dioxide emissions coming from ISON. Along with dust, carbon dioxide is a main ingredient in the comet’s 186,400-mile tail. The presence of carbon dioxide in comets is well known, and Comet ISON is producing it in copious amounts, giving credence to the astronomers who say it will turn out to be less spectacular than initially touted.

Whether or not Comet ISON will survive its trip around the Sun, or even brighten as expected, is not something we can accurately predict. The truth is we don’t know a whole lot about ISON’s exact size, density and composition, the very things that could determine its fate. Researchers involved in the study, funded by NASA’s Lunar Science Institute, have done comparisons with previous Sun-grazing comet behaviour and still remain enthusiastic about ISON’s possibilities. Astronomers are reasonably convinced the comet is large enough to escape disintegration, and newer findings put a positive spin on the comet’s fate.

What makes them so confident? In this case, it’s the movement of the comet itself. A comet spinning towards the Sun on approach would be subject to increased tidal forces, thus increasing its potential to disintegrate (despite its density). Fortunately for ISON, it appears to have a retrograde spin, or no spin at all, which helps to cancel out some of the tidal forces closest to the Sun. Thanks to current constraints on ISON’s nucleus properties, researchers have found that unless some violent jetting activity causes rotational spin-up, the comet will likely survive its solar confrontation.

Early-morning observers have been getting some first looks at Comet ISON. To date, it has breezed past Mars and is continuing towards the centre of our solar system. On November 18, it will pass within a half a degree of Spica (RA 13 24 59.4 – Dec -10 48 47) and be located just slightly under five degrees south/southwest of planets Mercury and Saturn. Finally, ISON will become naked-eye object by November 23. It won’t be long until November 28, when ISON makes its blazing pass just 730,000 miles above the Sun’s surface. Will it survive? Will it stay intact and put on a show for the eager crowd on Earth? We don’t know for sure, but we’ll all be keeping our eyes on ISON!

The Wex guide to astronomy