A Photographer’s Guide to Glasgow

Find some of the best photographic locations in Glasgow. John Farnan picks his favourite spots

As a long term photographer taking groups around Glasgow I have photographed and encouraged people to photograph these locations.

Although Glasgow is a large city most of the best locations are within walking distance of the city centre – with some of them being in very close proximity to each other.

No visit to Glasgow would be complete without a visit here, even if it’s just to get the classic shot of Wellington on his horse with a traffic cone on his head. 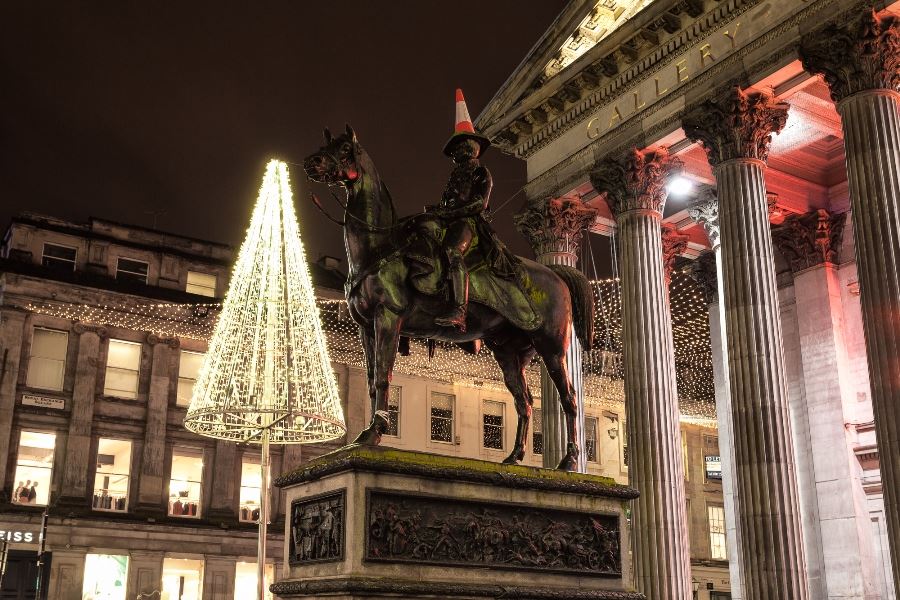 A visit at any time of the year is good – however, for some extra wow-factor, go at Christmas when the lights add some magic to the scene.

One of the more unusual bridges to cross the River Clyde. Originally built to help with the regeneration of the area, it has become a firm favourite of locals looking to get across the Clyde by foot or bike. This is the view looking south. 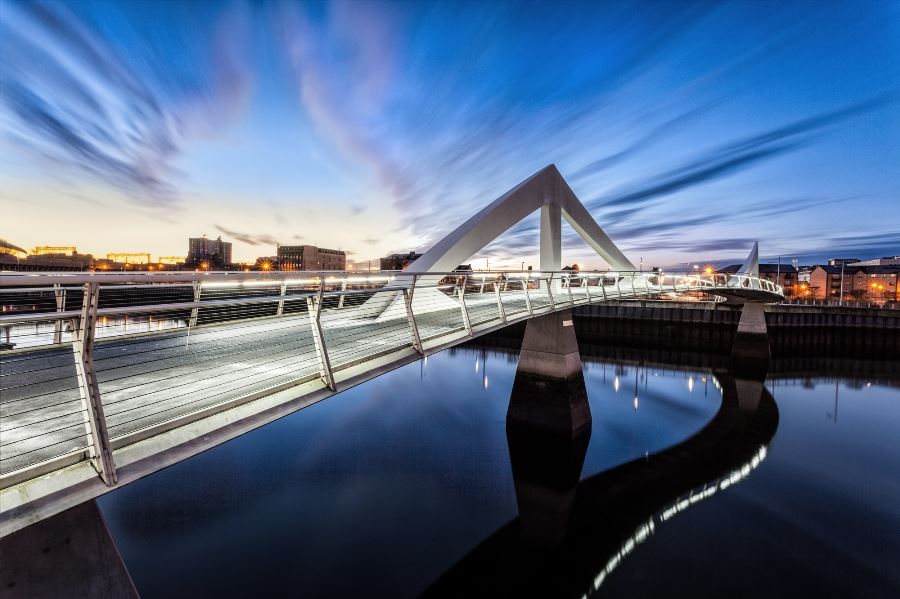 The best time to visit is sunrise with a slack tide, for that perfect mirror effect.

3. The Clyde Arc (The Squinty Bridge)

This one attracts tourists from across the globe and locals alike, all trying to get the best angle on the bridge.

One of my favourite shooting locations is from the north side looking across to the south side – taking in the apartments, which add to the scene. 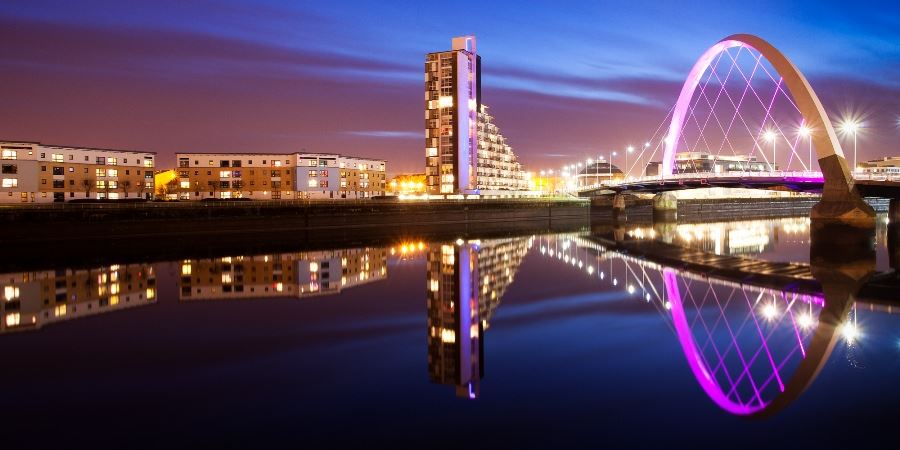 A bit of an oddity. On first glance this looks like any other memorial arch; in reality it’s anything but. This was originally a window frame, part of a building on Ingram Street a mile or so from its present location. It has moved a few times in its history and has only been at its present site since 1991.

This is a location you can visit at any time of the day, though I reckon it works best just after a rainfall, when the reflections will help your compositions. 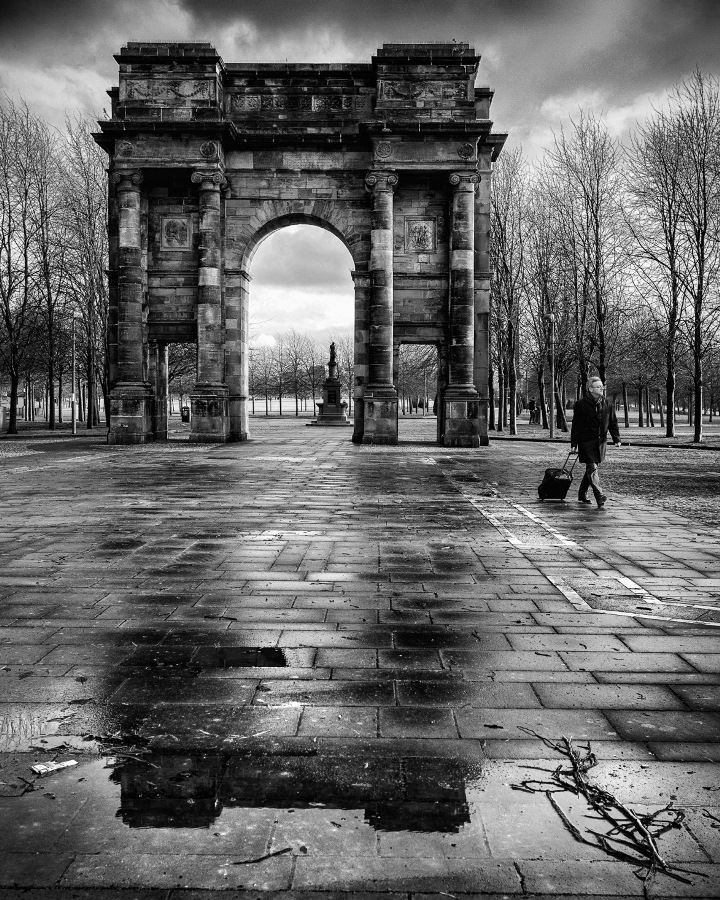 Located on Argyle Street, one of the city’s busiest streets, this bridge always has something underneath it. Part of Glasgow Central Station, it’s in continual use both above and below.

Back in the 1990s, the area under the bridge was so polluted they had to install massive blowers to ensure people could breathe reasonably fresh air while working and passing through. These days, traffic control alongside the blowers makes it perfectly good to walk under.

The best time to visit is probably in the early evening, when there is still a bit of light but not enough for a short exposure. Take along a tripod for some traffic trails. 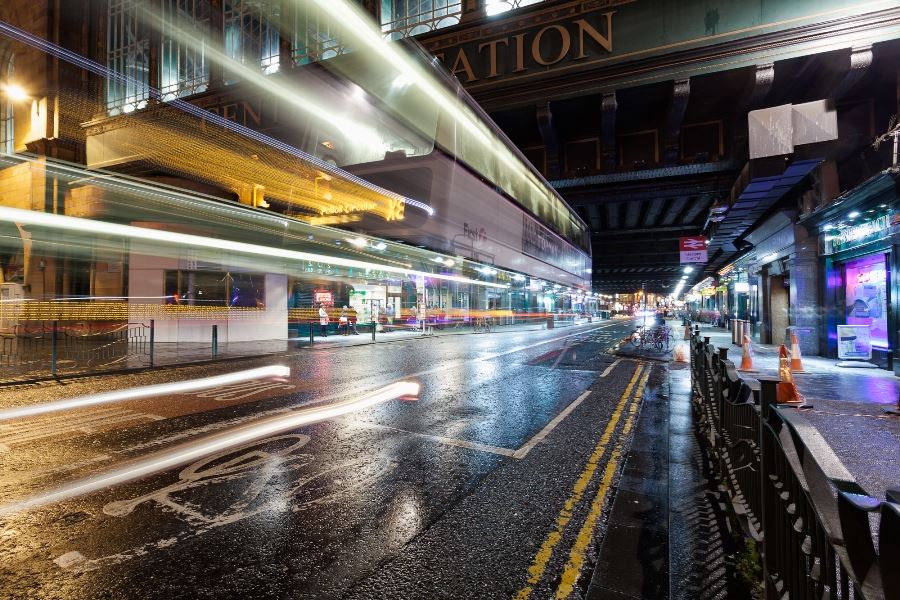 Part of the Clyde’s legacy of shipbuilding and commerce, the Tradeston Crane is one the few Titan Cranes still located along the river bank. No longer in use, it’s now more of an icon of the glory days of the River Clyde.

It’s best to photograph from the south side of the river, just outside the STV building. Be prepared to use a wide-angle lens as it’s pretty large.

Best times to visit are on the slack tide and in the golden and blue hours at sunrise / sunset. 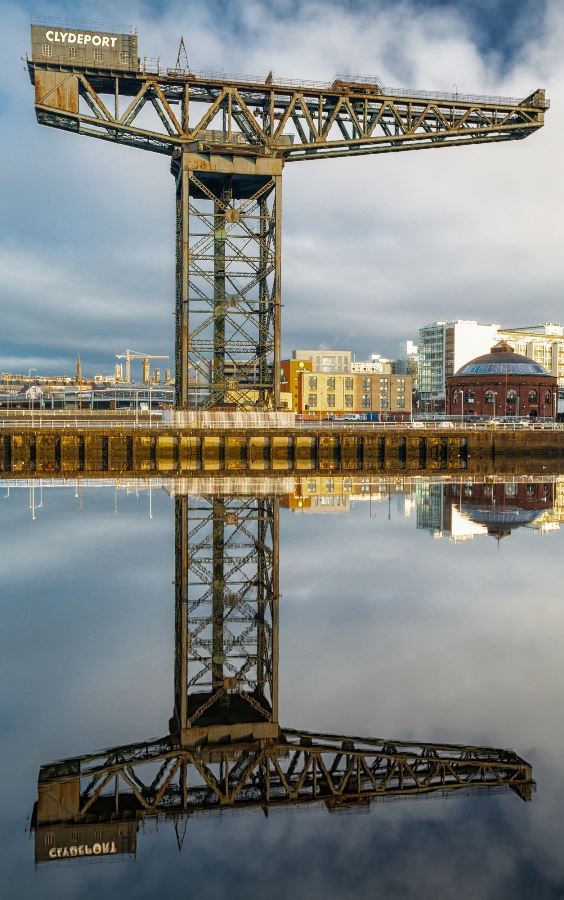 Whilst visiting the Tradeston Crane you can’t help notice the Armadillo, located just to the west along the River Clyde.

Very similar in appearance to the Sydney Opera House, it hosts regular concerts throughout the year.

Best visited when lit up at night (usually when there is a concert on) but it does work in the daytime as well. It sits right next to the SSE Hydro which is also very photogenic. 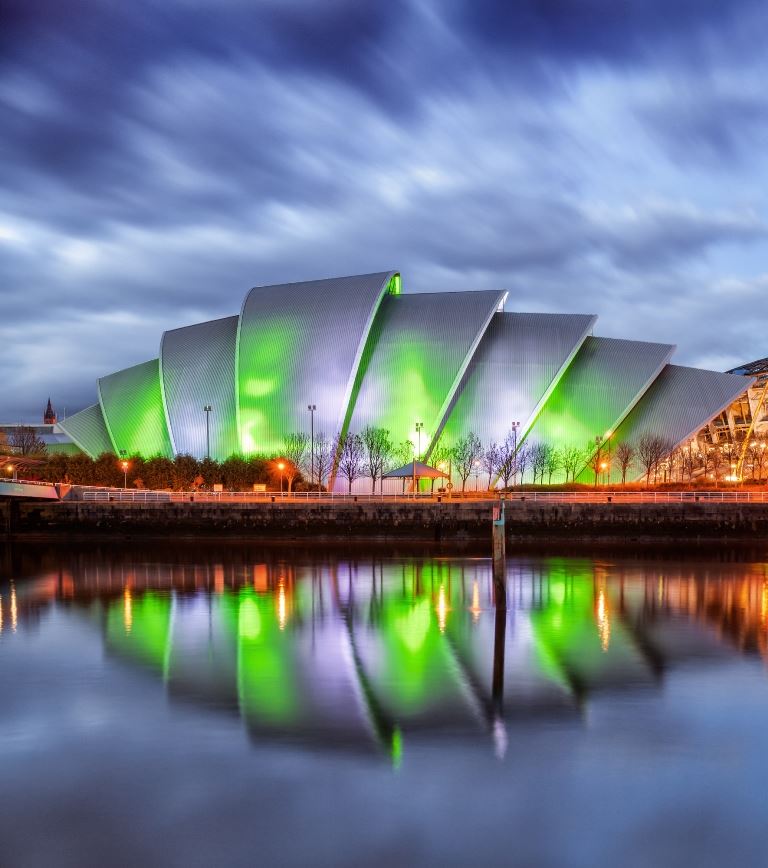 Located in Glasgow’s west end at Partick, this stunning piece of architecture holds the city’s collection of transport memorabilia including a massive collection of old cars, trams, motorcycles and even a steam train.

I would recommend visiting in the winter months at dawn, but this location works well throughout the day, offering a few different angles to shoot from.

The image here is of the front entrance but most people concentrate their images on the back entrance which looks onto the Tall Ship. 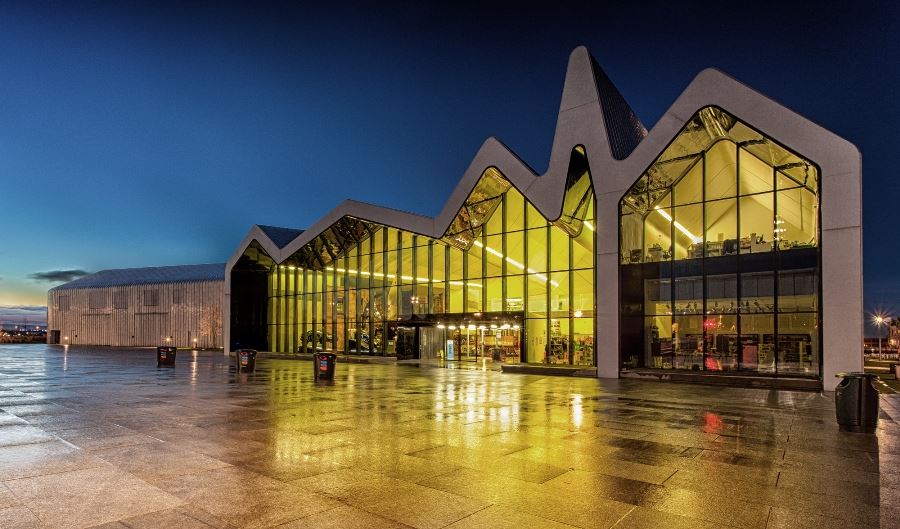 During the day it blends in a bit with its surroundings, but at night and in the early morning it’s lit up and stands out well against the backdrop of St. Enoch Square. 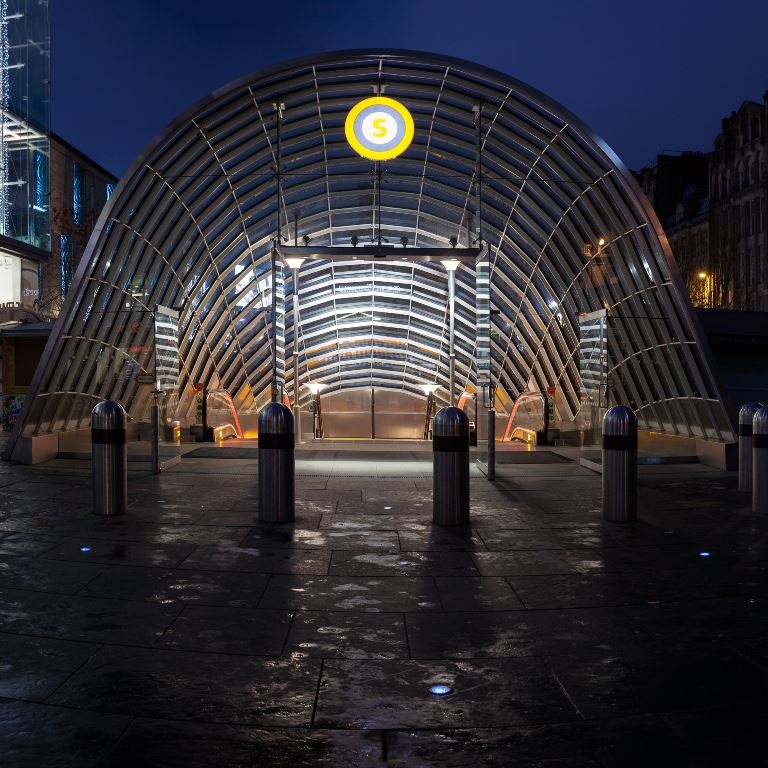 Situated in the west end alongside the river Kelvin, this gem of Victorian Architecture is a must-visit for everyone.

The most photographed elevation is technically the back door but it’s the best place to shoot it from. This is another where you’re going to need a wide angle lens to get the building in all its glory. To shoot the whole façade you will have to do a panorama merge unless you have an ultra-wide lens.
In years gone standing further back would’ve got you the shot, however more recently a massive planter has been added, which leaves you needing to stitch images together.

The image I chose is from the right-hand side. You can shoot this one at any time of the day, but it’s another where the Glasgow rain helps with reflections 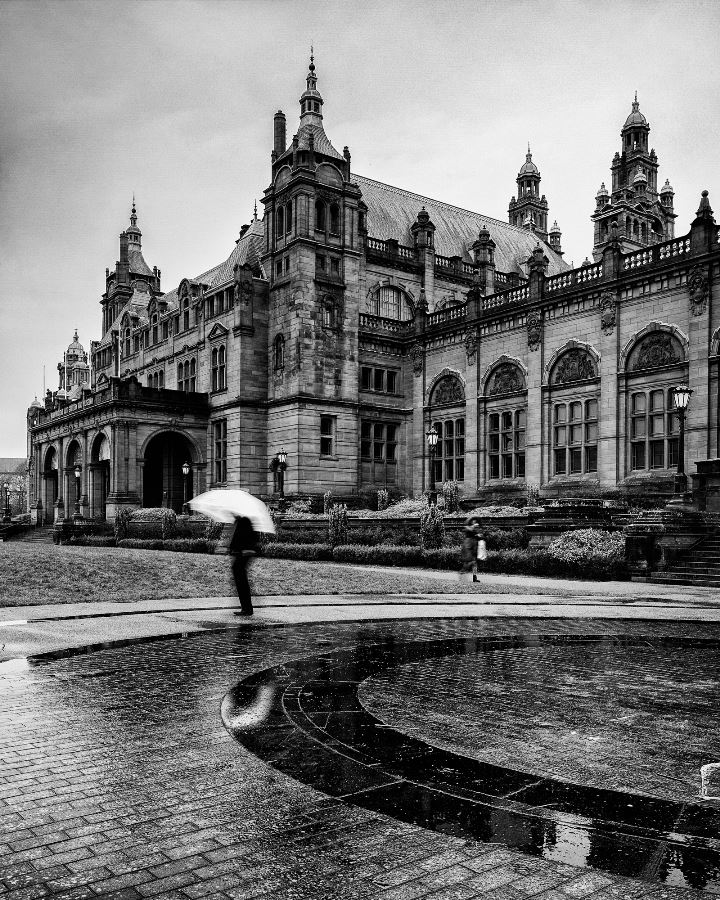 Situated on the outskirts of the city centre, this imposing building was built in the 1100s and has outlasted everything around it. It has a stunning copper roof, though its once-beautiful white sandstone has been blackened by the industrial revolution and years of grime that followed. It’s well worth a visit to admire its sheer magnificence.

Any time of day is a good time to visit for photography, but it does get busy during opening hours so it’s best to get there early in the morning before the crowds arrive 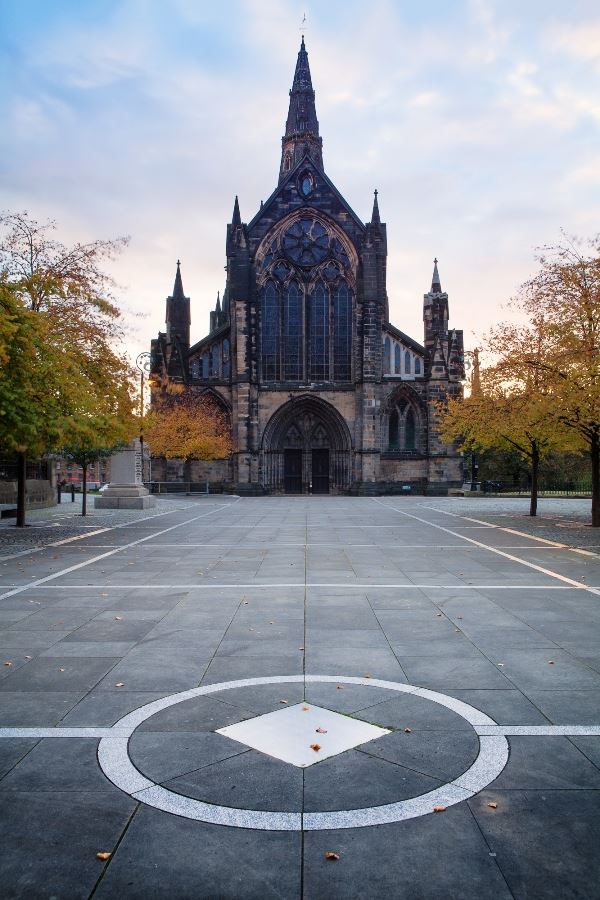 John Farnan runs photographic workshops in Glasgow and the Scottish Highlands. Find out more at imagetuition.com.