Episode one of An Indian Adventure. Watch the entire series HERE.

Welcome to the second Wex Photo Video travel photography mini-series. Following the success of last year’s A Balkan Road Trip, we decided to head out on another exciting adventure. But, while the first instalment showed what was possible with time constraints and a limited budget, the goal for this second instalment was much simpler – ignite a desire for wanderlust by inspiring you to explore the world with your camera. So, we hopped onto a plane headed for Asia and landed in the incredible country of India. 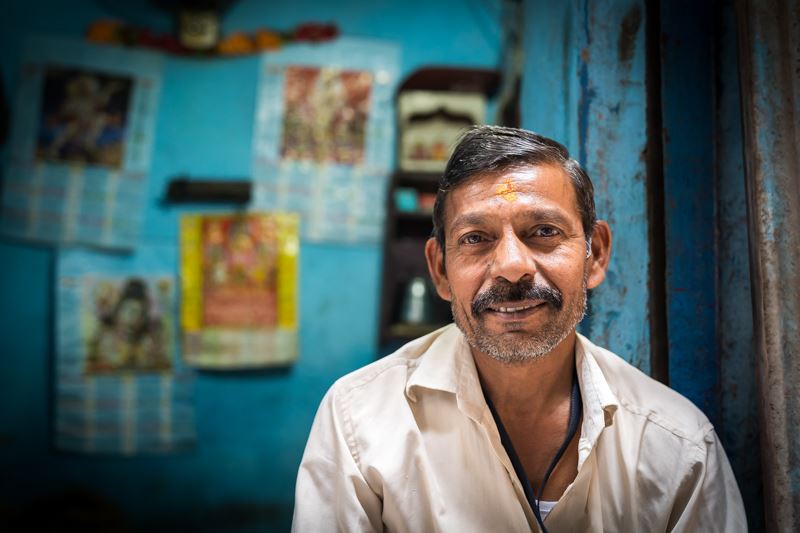 A friendly encounter on the streets of Old Delhi.

India has enticed travellers and photographers with its diverse and vibrant culture for generations. It’s full of amazing sights and wonderful people, and presents an intoxicating blend of chaos and calm, perfect for photography. Our week-long journey began in the hustle and bustle of Delhi, India’s capital city, before we travelled to the city of Agra, home of the iconic Taj Mahal. Our final destination was the ancient holy city of Varanasi, which sits on the Ganges River.

Once again, Wex Photo Video’s technical editor Kriss Hampton filmed my journey and was on-hand to capture my approach to photography, my kit choices and the challenges I faced along the way. I’ll be releasing three blogs to accompany the series’ three episodes, offering more insight into the journey’s highlights and some exclusive behind-the-scenes shots.

In a follow up blog I’ll also give you my thoughts on the kit I used – this trip was my first venture into the world of mirrorless cameras, specifically, the Sony A7 Mark III.

India is blessed with a varied geography and climate. Our trip coincided with unseasonably high temperatures that reached a stifling 40°C. In these conditions, the best option is to ignore any jet lag, and get up nice and early. Not only will you benefit from nice lighting, early mornings provide a great respite from the heat.

After booking our onward journeys at New Delhi train station, we were free to start taking photographs and chose to explore the nearby maze of narrow alleyways that make up the Paharganj district. 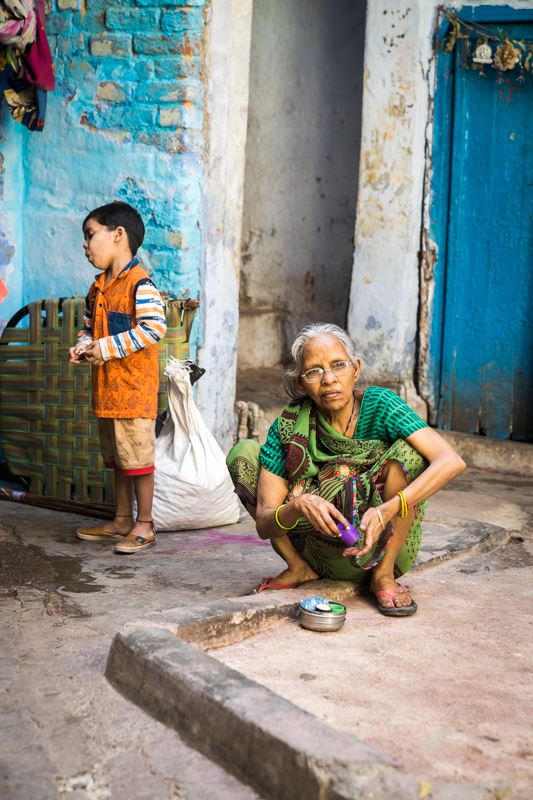 Head out early and you'll often benefit from great lighting.

In the afternoon, we set off for Connaught Palace in one of the city’s iconic auto rickshaws. The bumpy ride was accompanied with an endless cacophony of horns and the acrid smell of diesel fumes. India’s roads might be chaotic and crazy, but the experience is not to be missed. 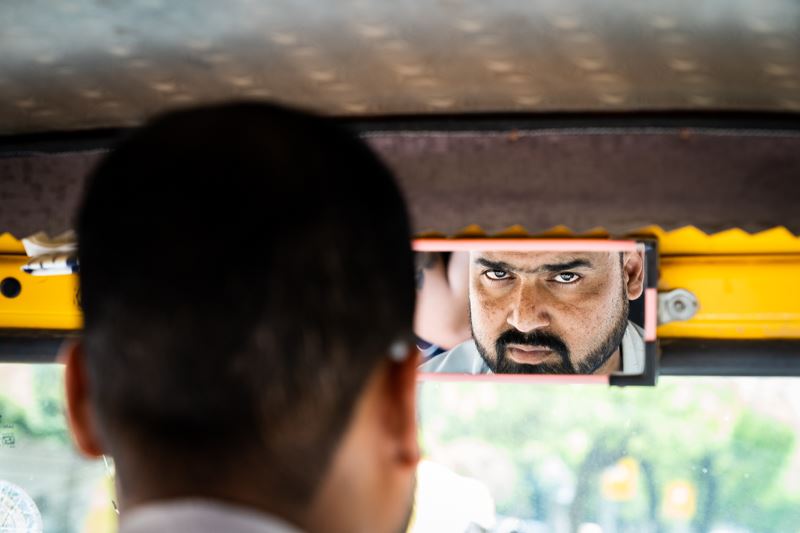 Connaught Palace (known locally as CP) is a popular commercial and business area as well as the spot where we were meeting up with talented local photographer, Sundeep Bali. Connecting with local photographers, either through mutual friends or via social media, is a great way to get an insider’s view of a destination. Sundeep took us to a stepwell called Agrasen ki Baoli, a type of reservoir used to hold seasonal rain water. While no longer in use, it’s a fascinating structure and a popular place for locals to hang out, shaded from the harsh sun. 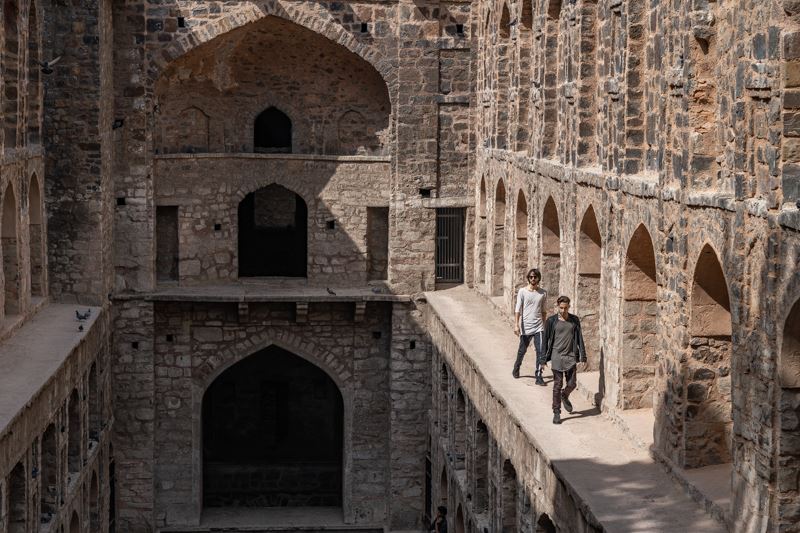 We then visited the Nizamuddin area where we walked through a market on our way to a Sufi dargah (mausoleum). Unfortunately, we couldn’t film or photograph around most of the dargah, but it was fascinating to witness the rituals of the heaving crowds as they left their offerings. Sundeep then led us to another Baoli where kids were jumping into the water to cool off. These are the sorts of hidden spots where a local’s knowledge is invaluable. 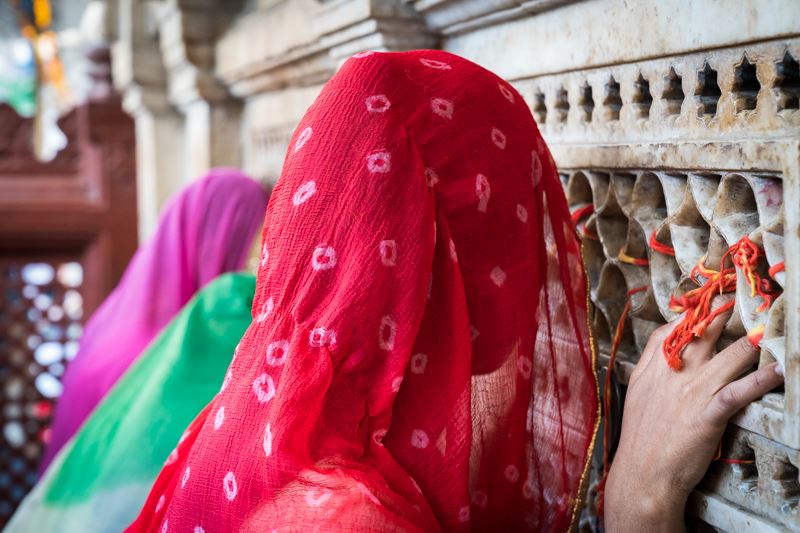 Women are not allowed inside the dargah and so peer through holes in the wall.

We ended the day at Humayun’s Tomb to catch the last of the sun’s rays hitting the gorgeous architecture. I wanted to set up my tripod and filters, and photograph into blue hour as the building lit up. Unfortunately, tripods are banned at the tomb, as they are in most sites in India. 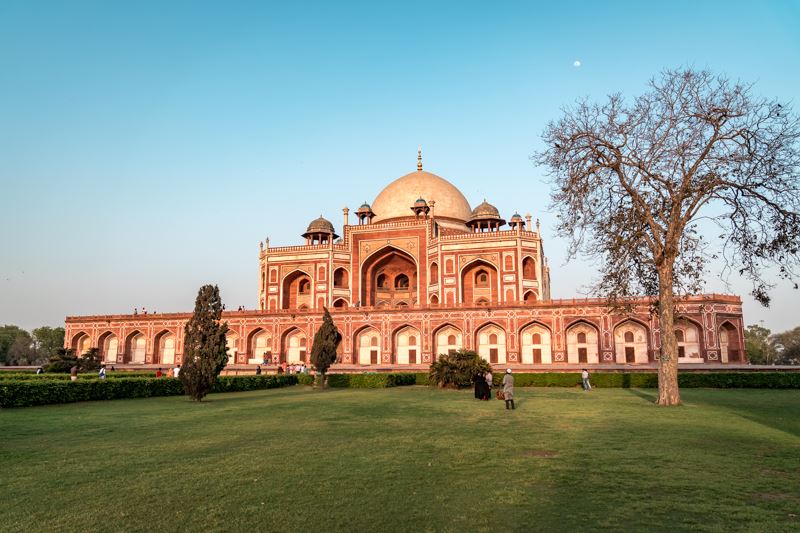 Humayun’s Tomb in the evening light. The impressive structure was completed in 1572.

Our second day meant another early start as we headed into Old Delhi to the fantastic Jama Masjid mosque. The pleasant post-sunrise temperature and wonderful light made this a great place to pass the time until we met up with Kursheed, a former street kid who is now trained as a guide by a company called Street Connections. 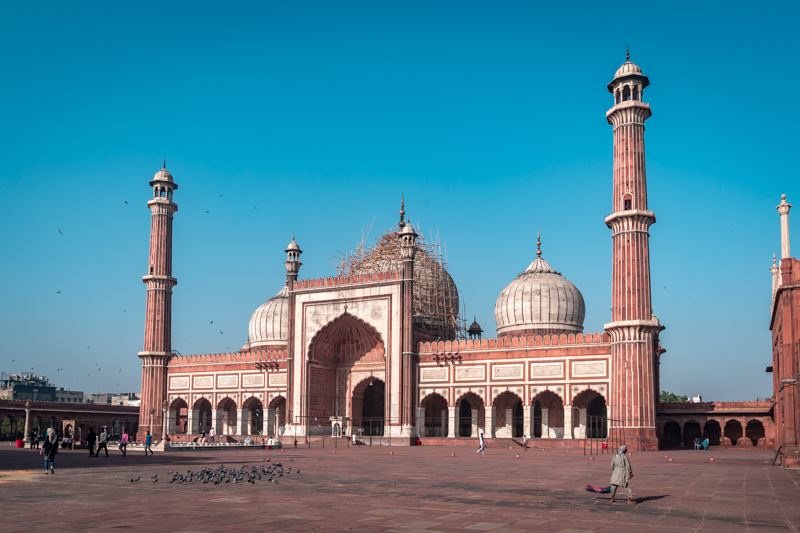 Jama Masjid of Delhi is one of India’s largest mosques and was completed in 1656.

Kursheed led us on a private walking tour through the labyrinth of narrow alleys where we saw hidden temples, havelis (houses with inner courtyards) and rooftop viewpoints of the city. Walking tours are a great way to explore a city as you get to interact with the people you meet. These encounters often provide opportunities to capture images as many people are keen to have their picture taken. Our walking tour was also helping to support an excellent cause through Street Connections’ affiliation with the Salaam Baalak Trust [SBT]. 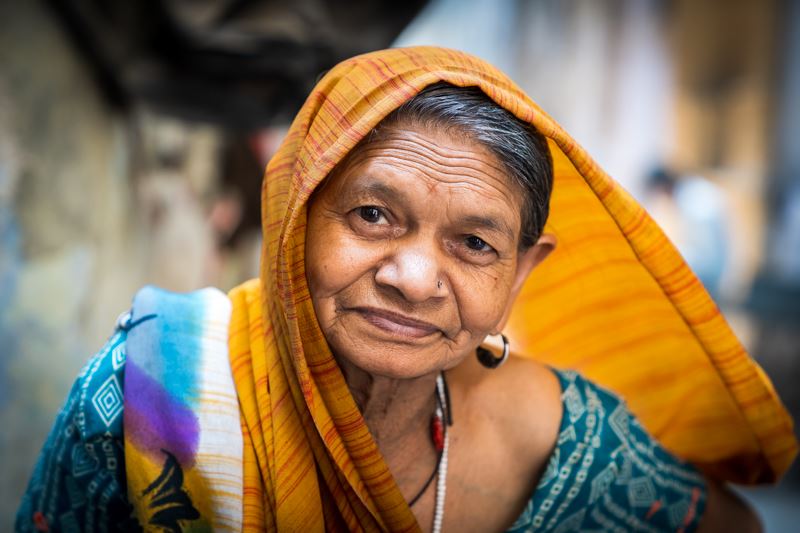 Saraswati, aged 77, in front of her home in Old Delhi. 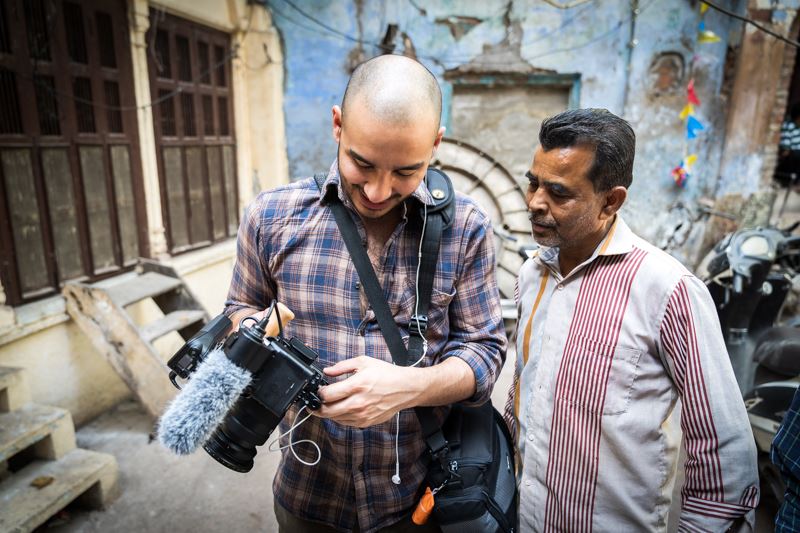 Kriss shows a friendly local some footage, on the streets of Old Delhi.

The SBT is one of India’s leading charities and works tirelessly to help the street children of Delhi. It has been estimated that there are 50,000 street children in Delhi, mostly runaways from poverty, abuse or lack of parental care. The charity was started almost 30 years ago and now operates six shelter homes (four for boys and two for girls) over 15 contact points around Delhi and a mobile school. These facilities support over 6,000 children each year, in a variety of ways, from giving the children a home and education to taking care of their mental and physical health. 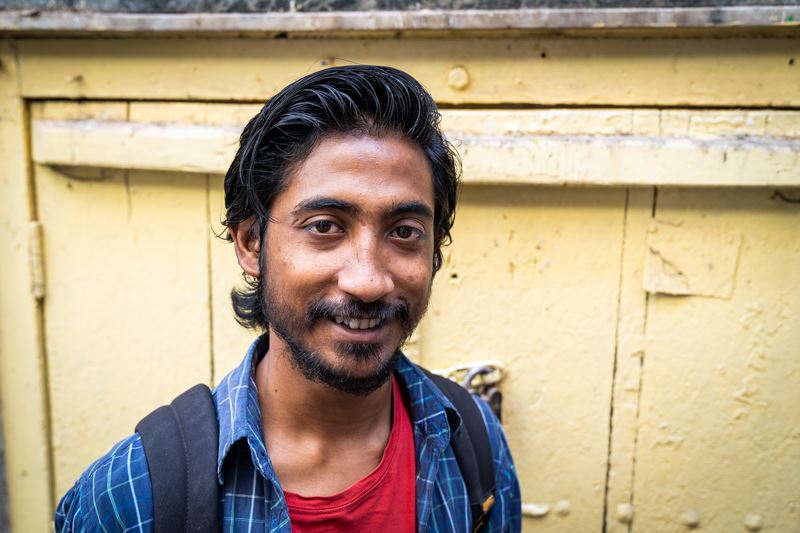 Kursheed, our guide from Street Connections.

The SBT also places a large emphasis on the arts, with children going on to become professional photographers, choreographers, actors, dancers, puppeteers and fashion designers. We were lucky enough to visit Kursheed’s former SBT shelter home after our tour, so we could chat with him in more detail. In the afternoon we once again met up with Sundeep as he was keen to show us Delhi’s most famous site, the impressive Qutb Minar complex, home to the world’s tallest brick minaret. 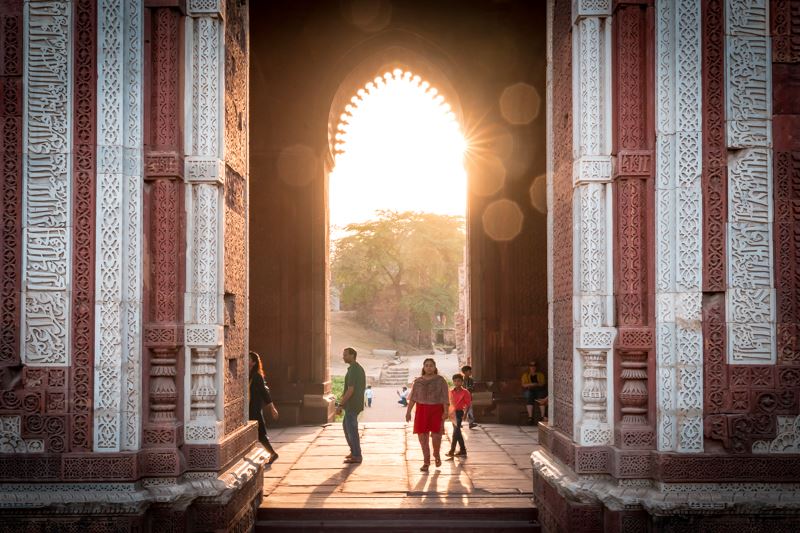 The setting sun through the arch of the Alai Darwaza gateway (built in 1311) at the Qutb Minar complex.

Our last stop in Delhi was the India Gate war memorial. It seemed all of Delhi had the same plan that evening as it was packed with people out for a walk. It was also our first and only chance to get the tripod out, a challenge with such crowds! 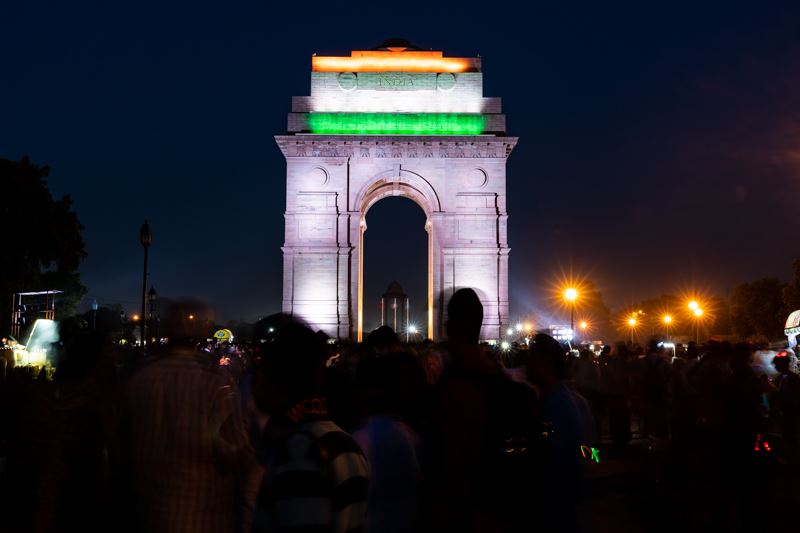 A busy India Gate, illuminated with the colours of the Indian flag.

In the next episode we visit Agra (home of the Taj Mahal) and I discuss the kit I use to capture my images. You can watch the entire series here.