By quite literally turning his back on a popular photo subject, Andy Farrer became Landscape Photographer of the Year 2015. He tells us the story 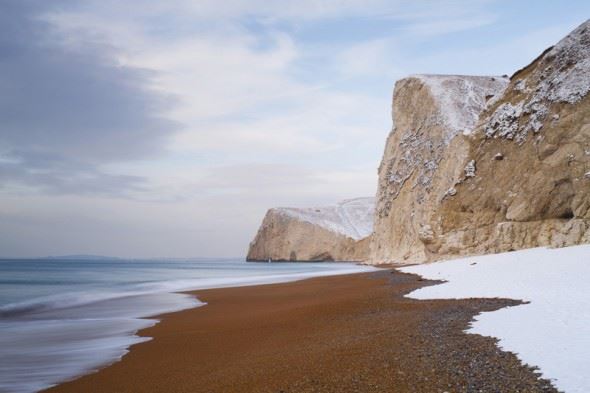 It’s the one everyone wants to win, but of course only one person can. Last year it was the turn of Andy Farrer to be crowned Take a View’s Landscape Photographer of the Year, with his beautiful, painterly image of the Dorset coast. We caught up with Andy to get the story behind the shot…

On being named Landscape Photographer of the Year 2015

“I was absolutely blown away. It’s enormous. It’s hard to put into words. I was incredibly emotional about it, because this is a very tricky career at the best of times, and any sort of leg up is very well received.”

“I’ve entered the competition six or seven times, and it was only last year that I first got on even the shortlist. Every year it’s an emotional roller coaster, you put your best work out there, and later it ends up with everyone on Twitter and Facebook going on about the shortlist while you’re there desperately checking your spam folder!”

“I’ve got a collection in Lightroom of all my entries from previous years, and every year I look at it and think, ‘Jesus Christ, no wonder you didn’t get shortlisted! What were you thinking?! Look at that, it’s terrible!’ But each year you do see the progress.”

“I’m based down in Swanage, so I’m right near Old Harry, Durdle Door, and have Corfe Castle literally five miles away. I’m in a very lucky little spot.”

“When I took this shot, Durdle Door was literally stood right behind me. It’s nice having something so iconic and so photogenic close to hand, but at the same time it gets photographed so much that it means you can’t just rock up and take an average picture. You’ve really got to let Mother Nature do its thing, wait for exceptional conditions, and make it your own.”

“It’s important I think to look behind you and around you for opportunities. It’s easy to get caught up in the main attraction, and the support acts are sometimes better I think.”

On the day of the shoot

“I’d seen the forecast for the day. I’ve tried photographing snow at Durdle I think four times previously, and when you step out over the brow of the hill to go down you just see this line where there’s no snow at all because of the strong wind coming off the sea. For it to settle on the beach is pretty unusual.”

“I started by shooting all the usual vantage points but with the added element of snow, and then went down onto the beach and just looked behind me. I saw the water had just started eating away at the snow, and I really liked the patterns. I thought to myself: ‘Quick, I’ve got to get this before it’s all gone’ – it had started to warm up and the snow was melting quite quickly as well as being eaten away by the water. It was literally a matter of quickly looking at the lines, doing a few compositions, then quickly changing lenses and sticking the filter on.”

“I tried a few different compositions as the waves came in. I tend to shoot a sequence, and there’s normally one where the waves come in just right. It depends where you start the exposure and when you stop it – you can move the shutter speed a third of a second one way or the other until you get the look right.”

“This one was done with a Zeiss 50mm f/1.4 lens. It’s an old lens but it’s beautiful. I bought it second-hand off of Antony Spencer after he’d pretty much ruined it, and I had it serviced. It looks like it’s been played football with, it’s so battered, but optically it’s absolutely fantastic. Beautiful little lens.”

“The filter I used was a Lee 1.2, as well as a polariser on the front. My camera was a Canon EOS 5D Mark III – my very, very battle-scarred 5D Mark III. The trouble is, I’m down on the coast three or four times a week, and with the best will in the world I don’t go rinsing my tripod out, I don’t get a damp cloth on my camera and wash the salt off. I tend to just clean the filters and the lenses and make sure they’re optically okay. So my gear takes a bit of abuse really!”

Andy’s image is featured in Landscape Photographer of the Year: Collection 9, available now from AA Publishing

Andy Farrer is a Dorset-based landscape photographer and winner of Take a View Landscape Photographer of the Year 2015. You can see more of his shots at andyfarrer.co.uk.

A Weekend with the Canon 5DS and 5DS R