Wildlife photographer Tom Mason explains how he captured this striking image of a flock of knot. 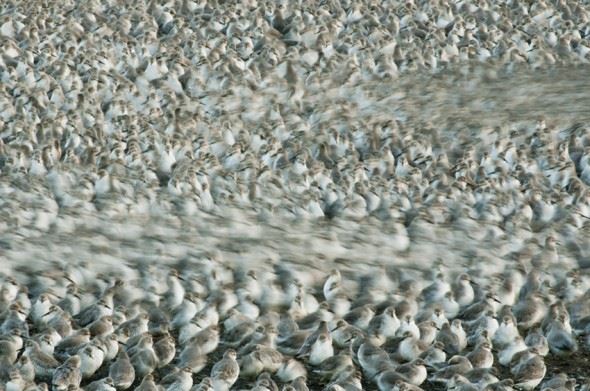 Some images take a moment. Some take days, others take weeks. But this one: years.

Having been interested in photographing waders along the Norfolk coast for a long time, I had always been attracted to the idea of working with the high-tide roost at RSPB Snettisham nature reserve.

For the benefit of those who don’t know about the roost, it’s an amazing natural phenomenon that sees birds flock to the area for the low-lying coastal mudflats that usually lie exposed – a perfect ground for feeding on small creatures. When the tide rises the birds are forced further inland, although they usually remain far out on the mudflats. Sometimes, however, the tide is so high that it covers the entire area, and it’s on these rare occasions that the birds are forced to flock together and take flight, before settling on the nearby inland pools. This is the rare occurrence I was after.

Having known about the event for a number of years, this wasn’t my first attempt. In fact, it was my fourth. I had always been plagued with bad luck on previous visits. Annoying winds, high tides that just weren’t high enough – every year I was thwarted at the last moment. On this occasion, however, the photography gods smiled down on me.

Having started out the night before, my colleagues and I were staying just a little way down the coast (due to the 5am start, I didn’t want to have to drive up from my home in Hertfordshire). After waking up at 4:45am and having breakfast, we took a short drive down the coast to the reserve. After parking we still had a two-mile walk to the hides, aiming to be there before the sun made its first appearance.

Standing on the beach, we set up between two of the hides as we were still unsure where the birds would come down to roost. The sound of the knot accompanied a great wave of the birds filling the sky, a dance of wings to the soundtrack of a beautiful chorus of song. As we watched, the birds streamed over our heads, landing in front of the hide to our right-hand side, roughly 50 metres down the beach.

Slinging tripods over our shoulders we jogged the final stretch, and as we opened the door of the hide we were treated to an incredible sight: around 40,000 knot, right in front of us, milling around in wonderful waves of bobbing heads, constantly reacting to the addition of more and more birds.

We started shooting but were limited by the light levels. With the sun just barely over the horizon, we were restricted to high ISOs in order to capture the details of the birds with fast shutter speeds. Luckily, Nikon’s full-frame cameras cope well to produce these kinds of images – but this wasn’t what I was after.

Instead, I grabbed my DX-format Nikon D300 body and dialled down the sensitivity. This allowed me to lengthen my exposures and capture the patterns and movements of the birds as they swirled and shuffled along the shore. Using my tripod and Wimberley head locked tight, as well as a remote release and my camera’s mirror lock-up mode, I manually focused and dropped my aperture to f/11. This increased depth of field and gave me a slower shutter speed, which allowed me to capture the movement of the birds as they roosted out of the tide’s path.

Getting the final image took a little longer than I expected. After I’d tweaked my exposure to exactly how I wanted it – balancing out the length of the shutter speed to capture the movement whilst not allowing all of the birds to fall into blur – I still had to shoot numerous frames. Some had far too much blur, others not enough. In Goldilocks-like fashion, eventually one was just right.

As with most of my images, post-processing was very minimal; I ran it through Lightroom, slightly tweaking the tonal curve, and then cropped in slightly to get the shot just how I wanted it. I sent this and a few other images I edited over to my news agency and, luckily enough, they were picked up by a number of publications. Most notably, one of the images featured in a spread for the Daily Telegraph a day later, making the whole trip more than worthwhile.

The whole experience was fantastic; an amazing natural phenomenon resulting in some great shots and an image in a national paper. To top it all off, I had lifted the curse that had plagued me for three years and shown that being persistent always pays off in the end!

Tom Mason is an up-and-coming wildlife and nature photographer from Hertfordshire. He has worked on a number of projects both in the UK and abroad and is passionate about the natural world. For more information on Tom, check out his website or follow him on Twitter.