Exploring The Isle of Harris

The Isle of Harris is a place of great wonder for me. When you’re there you feel cut off from the world and very far away from the bustle of day-to-day life.

The Isle of Harris can be found in the far northwest of Scotland in an area known as the Outer Hebrides. It’s not an island itself, as it is connected to the Isle of Lewis, which can be found further in the north.

I first fell in love with Harris back in March 2016 after being hired to go over there for work. It’s definitely not a quick journey to get to! From where I live, in Ayr, it takes more than six hours just to get to the ferry terminal on the Isle of Skye, and then there’s still the 90-minute boat ride to Tarbert before I’m on Harris. 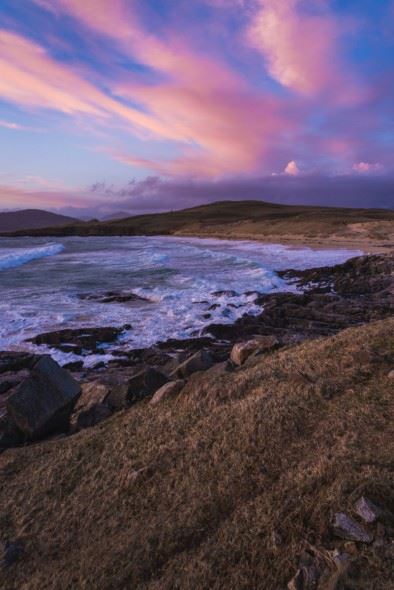 All images by Kirk Norbury

One of the first things you notice about Harris is that it’s very rocky and there aren’t many trees. As you drive through the winding roads you start to realise what a rugged landscape Harris really is, and as you get away from the villages you quickly start to get a sense of the extent of its isolation. But don’t let this deter you! The more of the Isle you explore, the more you’ll appreciate its beauty, and hopefully grow to understand why I feel there’s not much that compares to this incredible landscape. 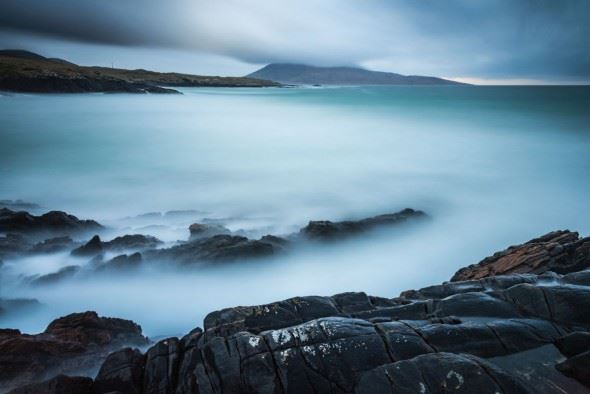 I love photographing along coastlines. There’s just something about the water crashing onto rocks, the ebb and flow of the tide and the setting sun in the distance.

I thought I’d seen some great coastlines on my travels but didn’t realise what Harris had to offer. See the Isle on a sunny day and you might think you had a made a wrong turn at some point and ended up on a Caribbean island – the beaches around Harris have a beautiful pale yellow sand and the water is a lovely turquoise blue. After seeing this for the first time I knew I was somewhere special.

You could make a photo stop every few minutes while travelling along the west coast of Harris. There are so many beaches and all of them have their own characters, each offering something different. 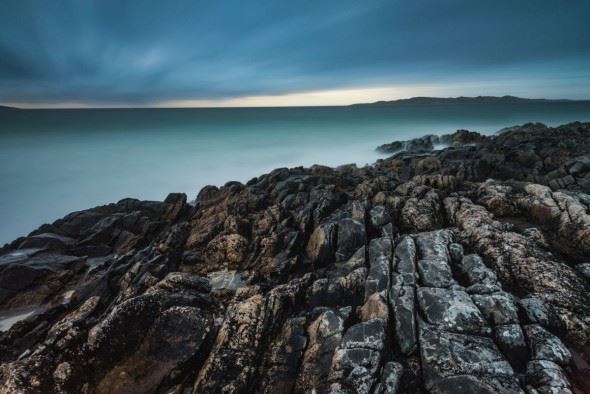 The beaches of Luskentyre, Seilebost, Huisinis and Borve are the first that come to mind. I could spend days just photographing these beaches and I’d always walk away with an image to be proud of. The sand on Harris is pristine, to the point where you feel bad for walking on it!

For the most part it will only be you at any given beach, so when you see these incredibly detailed patterns in the sand you’ll find yourself wanting to leave them the way you found them, even though just a few hours later the tide will wipe the slate clean and create new patterns. 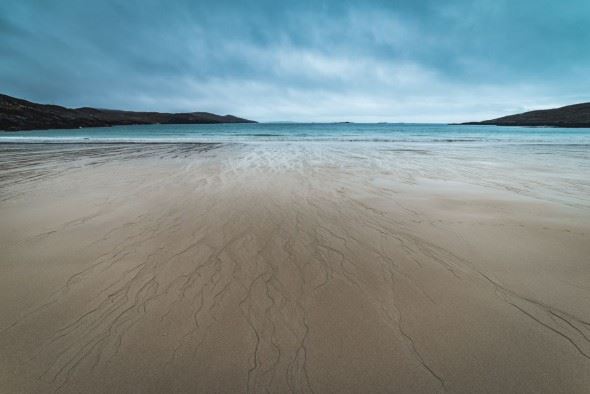 At locations like this I tend to go for a walk first along the beach or coastline to see what possibilities there are. It’s amazing how much you can miss if you stay in the one location for too long, so remember that the beaches of Harris all offer something different. For instance, Luskentyre offers great views towards the north of Harris and its incredible mountain range, while the beach at Huisinis looks south towards the island of Taransay, with some amazing patterns in its sand that I’ve never anywhere else. 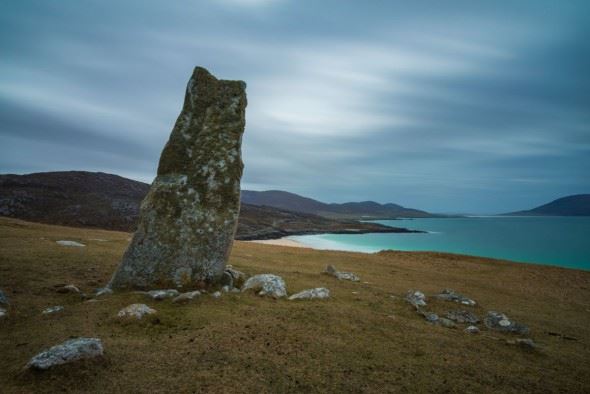 The Outer Hebrides are known for their standing stones that can be found all over Lewis and Harris, the most famous of them being the Callanish standing stones found on Lewis. Harris still has its own amazing standing stone found near the Traigh Iar beach, standing proudly on top of the hill. Looking out to sea you will find the Macleods standing stone, which also goes by the name Clach Mhic Leoid. This is probably my favourite standing stone on Lewis and Harris – it stands alone, 2.5 metres high, and looks out towards the island of Taransay in the distance. This is a location you could photograph at all times and in all weathers, but when it really shines is during the evening, just as the sun is setting. 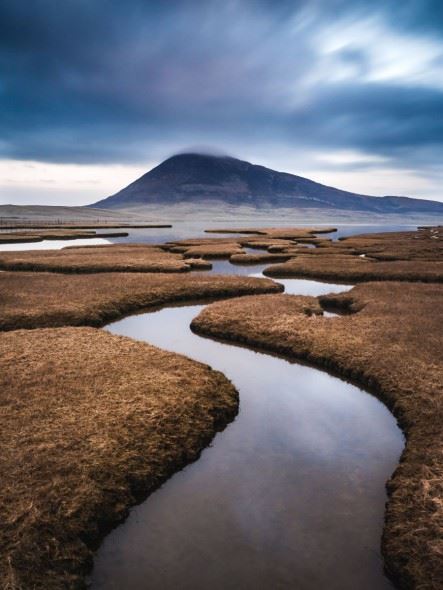 Heading south, you will see more stunning beaches and quaint little villages, and near the village of Northton you will find a small area of marshland. Now at first it doesn’t look like much but once you get down there, you will quickly see all these great leading lines created by the small estuaries. With Toe Head hill in the background, it ticks all the boxes for me for creating a very nice image. When I first visited Harris this was the first location I went to – I had already planned my shots and had a good idea what the weather was going to be like during the sunrise. 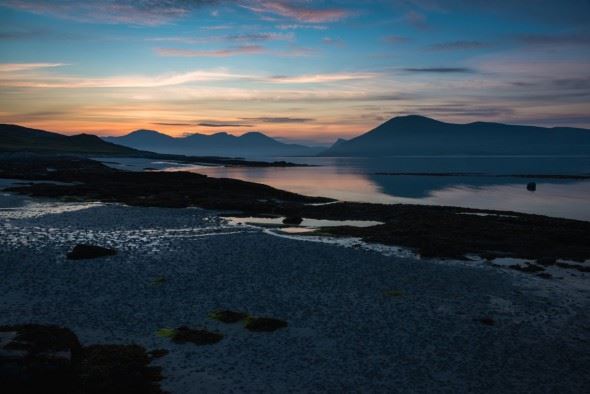 The island of Taransay is another incredible place that I’ve been lucky enough to visit. Getting there isn’t easy, as you need to know someone that will take you on the boat ride across.

The island was made famous back in 2000 when the BBC filmed their Castaway series, for which they followed 36 men, women and children who were tasked with surviving and building a community on this remote island.

I’ve gotten quite a few images from Taransay that I’m proud of, especially those taken in the late summer sun along the beach at Paible looking towards the mountains in the North. You instantly get that feeling of remoteness there; you’re cut off from the world and all you can hear are the sounds of birds and the occasional seal splashing around in the water.

One thing that I will never forget is hearing the local farmer as he was herding his sheep shouting across the hills in Gaelic.. 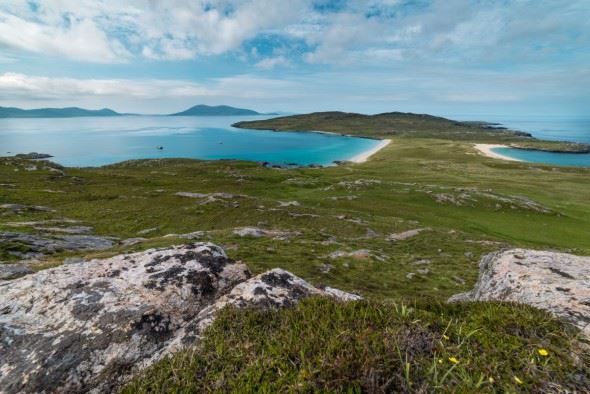 Even though I’ve been to Harris a couple of times now I still feel that I’ve hardly scratched the surface of what this place has to offer. I still need to explore the mountains found in the north and the winding roads of the east coast. The Isle of Harris is a place of wonder and full of mystery, and it’ll draw you in to the point where you won’t want to leave!

Packing the Essentials: A guide to holiday photography

Photographer’s Guide to the Lake District