In the Studio with the Light Revolution 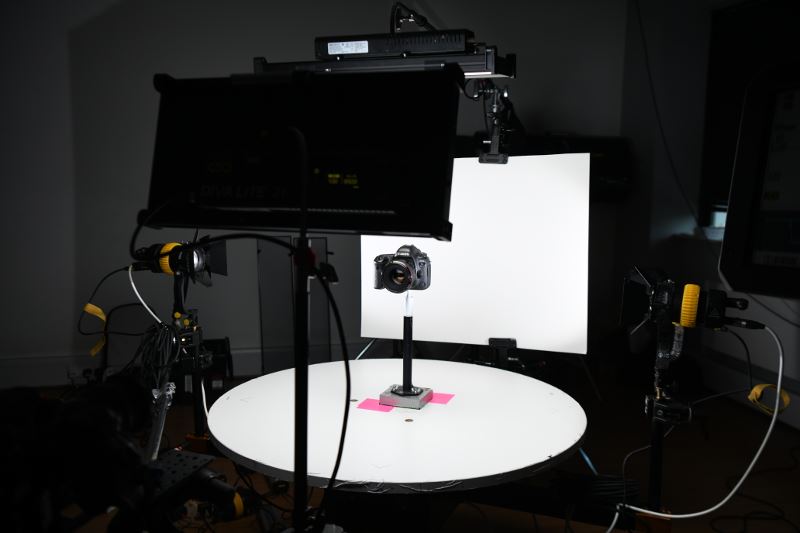 We love seeing real innovation in image-making, and the Light Revolution is one of the most exciting examples we’ve seen in quite some time.

The Light Revolution is an amazingly unique lighting solution for studio shooting – a motorised turntable that allows camera, lights and background to literally rotate around a subject. With a few presses of a button, you can produce 360-degree imagery with perfect lighting at every angle. Full revolutions can be completed in seconds, allowing you to create circular patterns of light, shoot rapidly from multiple angles, and more.

“Effectively, it’s painting with light,” says the Light Revolution’s inventor, Patrick Llewelyn-Davies. Patrick is an experienced professional photographer with a passion for innovating and pushing the limits of what studio lighting can do – the idea for Light Revolution actually came to him when he was light painting, when he was finding it difficult to reliably produce specific effects more than once.

Wex Photo Video is proud to be the exclusive UK distributor of Light Revolution through our Rental service. So, when Patrick invited us down to a studio to sit in on a shoot he was planning with professional photographer Jon Cole, we couldn’t have been more excited! 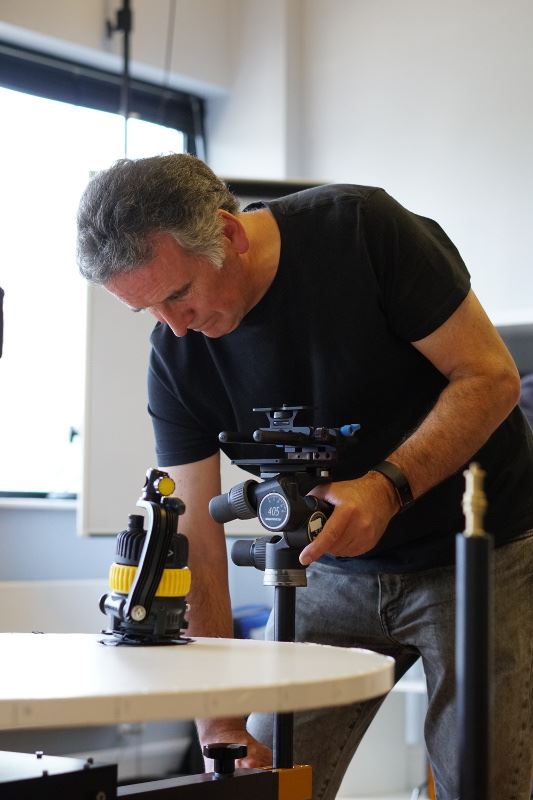 Patrick putting the rig together

On a slightly wet Monday morning, we arrive at the studio in West London to find Patrick and John already busy setting up. The Light Revolution is being rigged and is almost ready in the middle of the room. So, what are we shooting?

Well, it turns out we’re in for a pleasingly meta day in the studio, as what we’re putting in front of the camera is… a camera. Or two cameras, to be more precise. The brief is to get 360-degree rotating video shots of first a Canon EOS 5D Mark IV, and then the full-frame mirrorless Canon EOS R, for a Wex Part-Ex short advert. We’re filming on a Canon C200 cinema camera, and lighting the set with Dedo lamps and an overhead LED, all of which attach easily to the Light Revolution. A few extra Magic Arms are also put in place to ensure everything is steady and well-braced, while a rectangular white card is mounted opposite the camera to serve as our background. We also have an Atomos Sumo 19 monitor connected to the C200 for playback. 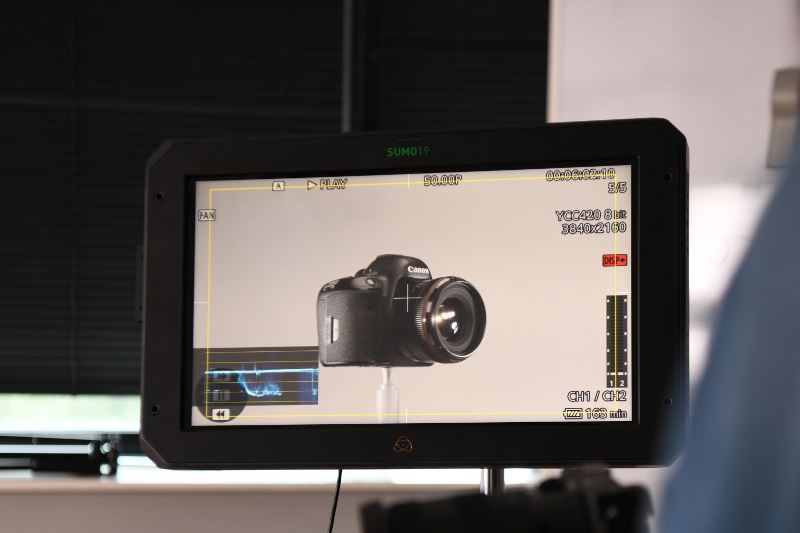 We’ll have a lot of shooting flexibility with the Light Revolution. The gearbox that powers its rotation is not only powerful, but accurate to a pin-point – “It’s got 1.5million positions per rotation, so it’s very precise,” Patrick explains. 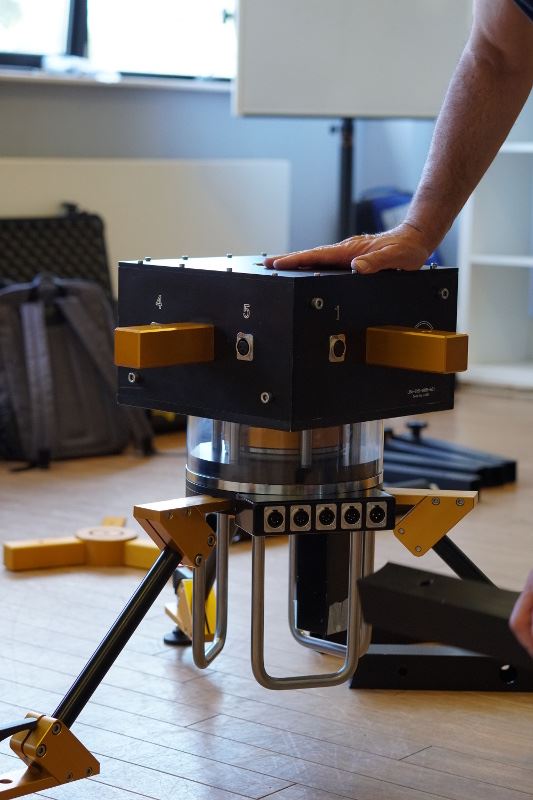 The central gearbox that makes the table turn

There are multiple ways you can take control of the Light Revolution to take advantage of this. One of them is the frankly awesome-looking bespoke control panel that Patrick has designed – a chunky, brass-topped unit that looks straight out of a sci-fi movie. For today though, Patrick will be controlling the Light Revolution with his laptop for complete digital precision.

Indeed, precision was at the forefront of Patrick’s mind when the idea of the Light Revolution first occurred – he actually first envisioned it as a tool for photogrammetry (the science of using photographs to make measurements), following a conversation with a photogrammetry specialist at Brighton University. Indeed, by swapping out our Dedo lights for some different lights and devices, one could easily convert our setup for photogrammetry. The whole system is very versatile. There are lots of interesting titbits about the Light Revolution that Patrick lets us in on as the shoot progresses – for example, on the original design, the camera was placed at the top!

The central hub weighs an impressive 33kg – so there’s no danger of any part of the ensemble losing balance or tipping over. Once everything is secure, it’s time to close the blinds, turn on our lights and start getting our shots. 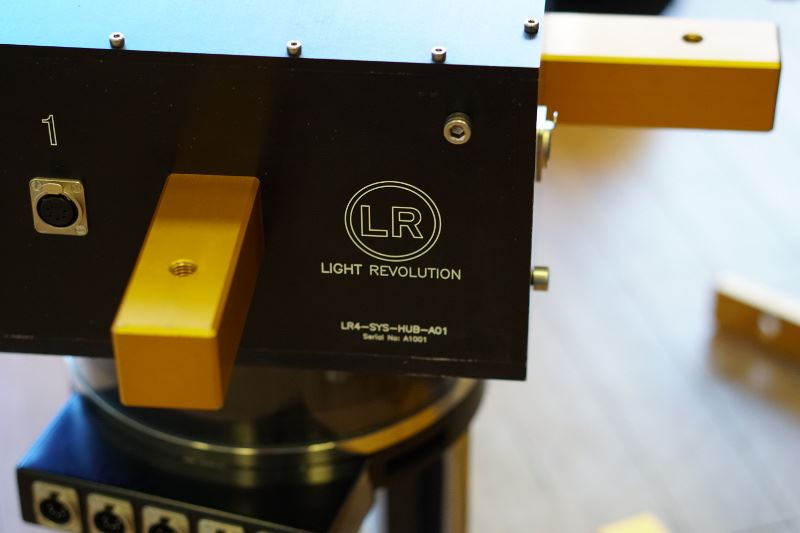 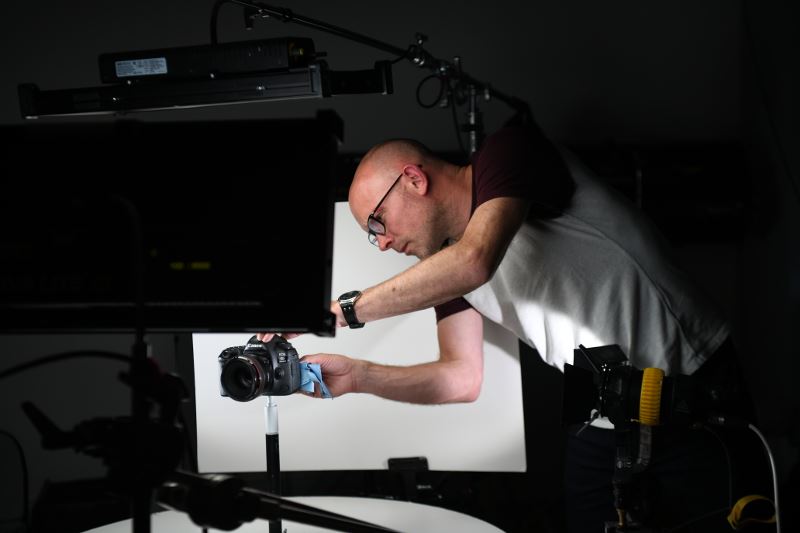 Jon gives our subject a quick clean – it’s ready for its close-up!

With everything in place, we fire up the Light Revolution. There’s no shortage of Back to the Future-inspired jokes about “activating the flux capacitor” as the machine whirls in to life. In reality though, this machine proves infinitely more reliable than Doc Brown’s temperamental DeLorean – even with the multiple magic arms and lights attached, the Light Revolution’s motors don’t have a problem.

We’re able to experiment with different rates of acceleration and top speeds, not to mention rotation directions, all of which is accomplished by a few keystrokes on Patrick’s laptop. Being able to start and stop the rotation in the exact same position is also hugely useful, meaning we know exactly how our final deceleration is going to look and can place the subjects accordingly. We play with a few different frame rates, playing back our results on the monitor to see what looks best. We’re shooting RAW files for maximum post-production flexibility – though this does mean Jon has to do a fair amount of card swapping!

“It’s all about experimenting,” Patrick says, and as we’re watching the process, it’s easy to see what he means. 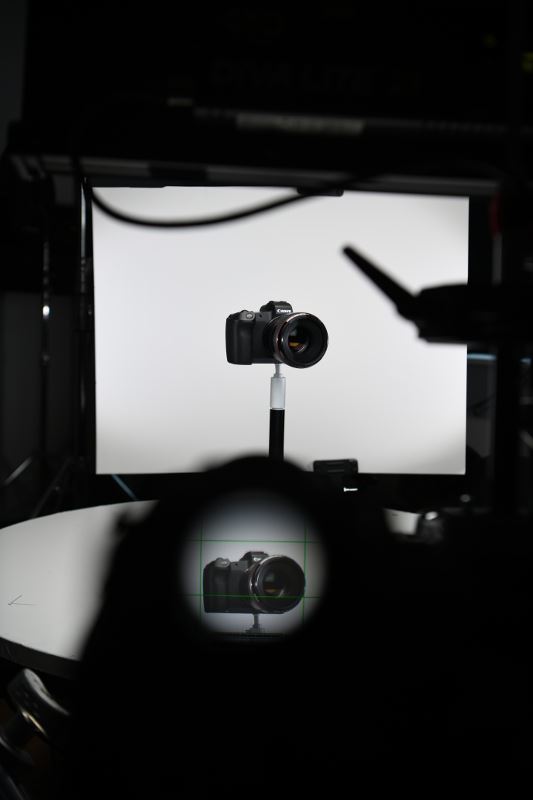 Framing up the subject

In this case, we’re taking our time and playing to see what works. However, one can easily imagine a studio or product photographer getting their process set in stone and then rattling off 360-degree shots of multiple subjects with amazing efficiency.

We shoot multiple revolutions of the EOS 5D Mark IV, then swap it over for the EOS R. For the latter camera we ideally want the rotation to smoothly decelerate and come to a stop just as the camera’s name badge hits the centre of frame – those precise controls make this easy to achieve.

Watching the results unfold on the Atomos monitor is an absolute treat – seeing the way the light plays off the contours of the EOS R quite simply never gets old.

You don’t have to take our word for it though – take a look at the shots below in the final video:

It was great to see the Light Revolution in action – thanks to Patrick and Jon for letting us sit in on the shoot!

If you want to try it out for yourself, head to our Light Revolution Rental page where you can get in touch with us to chat further.

Under the Surface | Underwater Photography with Lexi Laine

Should I calibrate my monitor? Why colour consistency matters and how to achieve it