I wasn’t born in 1959.  I wasn’t even so much as a twinkle in my Ma and Pa’s eyes in 1959. In fact, my Ma and Pa weren’t even of the age where they had started getting twinkles, neither of them even having hit their teens by 1959. What I’m getting at is that when the Olympus E-P1 camera was launched, its PEN heritage meant little to me and was probably equally insignificant to any photographer who has grown up in a world of SLR cameras.

As such, the arrival of the Olympus E-P1 was met with a certain level of apathy on my part; just another camera in an age where new cameras seem to be announced every week. Panasonic followed suit with their Micro Four Thirds camera, the GF1, Olympus have launched the second version of their digital PEN, the E-P2, Samsung have recently announced their take on the mirror-less camera body with the NX10, and it can only be a matter of time before other manufacturers jump on the bandwagon and offer their own models in this expanding category.

Which begs the question; why? Digital photography was ticking along quite nicely with just SLRs and compacts, and for those wanting something in between, so-called “bridge cameras” (like SLRs but without interchangeable lenses) seemed to do the job. So is this new format plugging a gap or driving a wedge?

SLR stands for Single Lens Reflex. SLR cameras are thus named because they have a single lens and a reflex mirror which moves out of the way when the image is exposed. As this new breed of mirror-less cameras is, well, mirror-less, there is no reflex and the SLR moniker simply does not fit. TLAs (Three Letter Acronyms) have always been popular in the marketing world and there have already been suggestions for this new format. Single Lens Direct-view, or SLD was one such suggestion, while Olympus and Panasonic went with Digital Interchangeable Lens, or DIL cameras to describe their offerings. 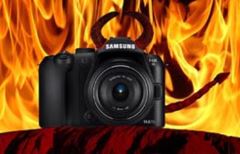 My particular favourite offers a rather brilliant four letter acronym; Electronic Viewfinder Interchangeable Lens, or EVIL cameras. Aside from the obvious difficulties of marketing an EVIL camera, the Olympus E-P1 doesn’t have an electronic viewfinder, so straight away this term is far from all encompassing.

The idea seems to be that for compact camera users who may want the benefit of an interchangeable lens system but don’t want to invest in a full SLR system, an SLD offers a suitable alternative. So what are the benefits of an SLD over and above a creative compact? Well, the obvious one has already been mentioned; interchangeable lenses. Taking Panasonic as an example, there are dedicated Micro Four Thirds lenses in focal lengths from 7mm up to 200mm, or to standardise these focal lengths in 35mm film terms, this provides a range from extra-wide-angle 14mm up to 400mm telephoto. Even a super-zoom compact like Panasonic’s TZ7 (which is towards the upper limit of what can truly be called “compact”) doesn’t offer this range of focal lengths in an all-in-one solution.

The sensor in these SLD cameras is also significantly larger than that found in most compact cameras so the image quality will be improved. Speaking of size, how do these SLD cameras compare with compacts? Well, to make it a fair comparison you really need to look at compacts that offer similar controls and performance such as the Canon PowerShot G11. Comparing the Panasonic GF1 to the Canon G11 shows that there is really very little in it. The Panasonic GF1 body is marginally longer than the G11, but not by a lot, and actually not quite as tall.

However, a camera body is not a lot of good on its own. To take pictures, a lens is required. The Canon PowerShot is equipped with a 28-140mm lens, and the Panasonic GF1 is available in a kit with a 14-45mm lens. Although not a direct comparison in terms of focal lengths, it’s the most appropriate body plus lens kit available for comparison and shows how the size issue suddenly changes with the addition of a lens - the GF1 suddenly isn’t so compact.

This difference between SLD cameras and compact becomes even more obvious if you look at a slightly sleeker compact creative and compare it with the Olympus E-P1. The Canon PowerShot S90 has many of the functions of the G11 and therefore of an SLD camera, but in a much neater body. The Olympus E-P1 is lacking one feature that all compacts and most SLD cameras have – a built in flash. A separate, equally retro looking flash is available, but this of course adds yet more bulk to the equipment you have to carry. 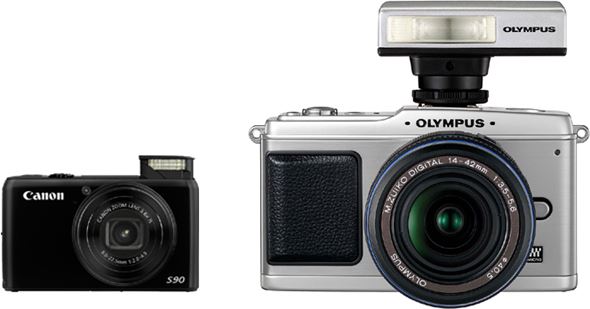 Compared to compact cameras, owning an SLD is going to require more kit to be carried and is certainly not a “pocketable” option. However, their performance and image quality is generally much better than most compact cameras, even if that quality does come and at a premium in terms of retail price. What’s more, because it forms the basis of an entire system, an SLD will allow you to choose the lens that best suits your needs and chop and change as required. But this brings them into close competition with the current mass of digital SLR cameras, and how do they match up to the reigning champ?

There’s very little difference in cost between an SLR and an SLD set-up, so why choose an SLD over and above an SLR? Size and operation has to be the main consideration. In terms of operation, SLDs handle much like a compact; composition is primarily carried out via the rear LCD screen (although some models have electronic viewfinders) and unless your hands are particularly small it’s even possible to use an SLD one-handed. This is due to the smaller size of SLDs. Because they don’t have a mirror, there’s no need for the mirror housing and pentaprism which gives an SLR its distinctive top “hump”.

To match the smaller design of the SLD cameras, their dedicated lenses tend to be more compact too, so the whole kit is noticeably neater in comparison with an SLR. Granted, you may also need to carry an external flashgun or optional viewfinder, but you can take these as and when you need to. 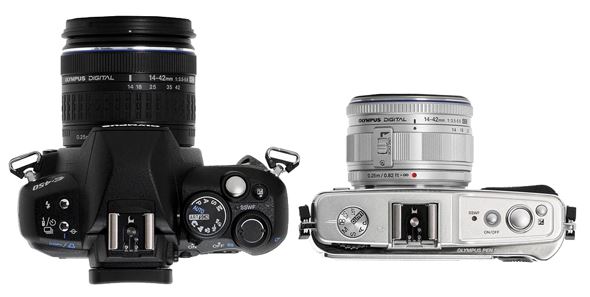 Where the SLDs lose ground against the SLRs is in terms of performance. Most of the creative options you will find on an SLR are present on an SLD, but the speed and efficiency with which SLDs perform is simply not on a par with SLR cameras. Because the SLDs are effectively permanently in live-view mode, the autofocus and frame rate is a good deal slower than SLRs due to the use of a contrast-detect rather than phase-detect autofocus system.

Photographers used to a traditional reflex viewfinder may also find using the screen to frame shots awkward and unintuitive. The electronic viewfinders on some SLDs may be of superb resolution, but somehow they simply don’t compare with the real thing, particularly when following fast moving action. Without a doubt, then, SLDs are not for your average sports or wildlife photographer – they simply lack the pace.

A gap in the market?

It can certainly be argued that SLD cameras sit in the gap between compact camera and SLR. In general they offer better performance than a compact and are not as big as an SLR. That said, it could therefore also be argued that an SLD does not perform as well as an SLR and is bulkier than a compact. That’s always going to be the problem of a compromise; what you gain in one way you lose in another. But if you stop to think about it for a moment, the world is full of compromises that sell very well.

Back in the days of film, SLR cameras themselves were a compromise. They are smaller and more portable than medium format cameras, but do not offer such good image quality. SLRs were faster and easier to use than rangefinder cameras, but larger and noisier. However, there can be no argument about the success of SLR cameras.

The car market is another good example. Just think of how many different types of car there are, from compact, economical cars like a Mini, to all out fuel gobbling race-track rockets like a Ferrari, to large, lumbering off-roaders like a Landrover. And of course, think of all the cars in between: every single one of them will be a compromise of some kind, and every single one can be seen being used on the roads today.

Going back to cameras, in today’s digital world there is absolutely no reason why photographers should have to be limited to a choice of 2 types of cameras – SLR or compact. Why shouldn’t there be another option? And in a few years when SLD cameras are everywhere and accepted and used alongside compacts and SLRs, if another type of camera is invented, then good for us! More choice can not be a bad thing.

For now then, SLDs should not have to justify their reason for being. They exist now and for many people they will be the camera of choice, despite, or perhaps because of the compromises they make.

I’ll finish with a final automotive analogy. Many years ago, a neighbour of mine used to custom-build motor-trikes (3-wheeled motorbikes). My physics tutor at the time was a keen motorcyclist and I mentioned my neighbour to him one day in conversation. He said that he could never see the point of trikes, because they had many of the disadvantages of a bike, such as exposure to weather, plus many of the downsides of owning a car, like being stuck in traffic. I argued that I thought the trikes offered some of the positives of bikes, like having the wind in your face on a hot day, along with some of the benefits of a car, like better stability and passenger comfort. Later I spoke to my neighbour about the conversation. His response was quite simple: “I just like trikes”.