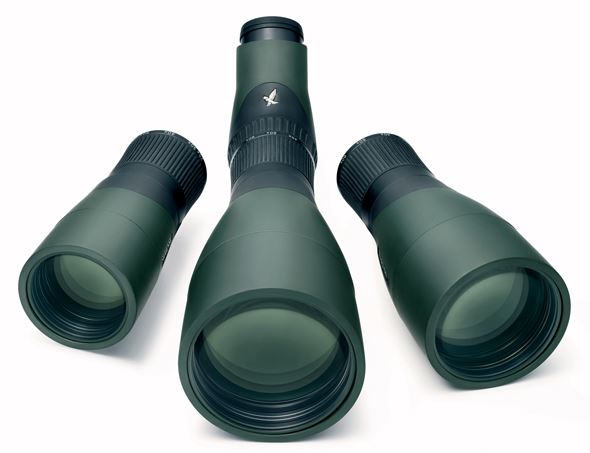 I have been using Swarovski equipment for over fourteen years now. During this time I have had the privilege to test and use various models and year after year something comes along that is better than the last. That goes without saying, as a new product should always be an improvement on the current one. But with Swarovski Optiks it’s always hard to believe that an improvement is even possible. There are always rumours that the new optics are going to be brighter or lighter and I always hear people say “but how could they be even brighter”? Sure enough, when the new product arrives it is lighter and it is brighter and amazingly it is even better than the one before!

This is most certainly the case with the new Swarovski Optik ATX/STX modular system. When I first heard about this new range of telescopes I spent a lot of time wondering what it would be like. How can a scope be improved and how could it possibly change the whole concept of a telescope? Well, this system does. The new ATX/STX range allows flexibility never before possible because you can change the objective lenses. Of course, on an old scope it was possible to change eyepiece (magnification) but not the objective. So the ATX/STX effectively comes in five parts. You have a straight ocular (STX), the angle ocular (ATX), and three different objective lenses: a 65, 85 and 95. 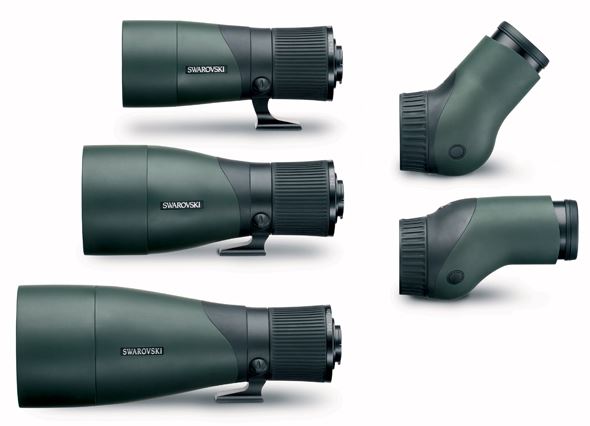 Okay, realistically, I am sure there are not many people out there who can afford to buy all five pieces. But you could if you wanted to and then you really would have options for every possible birding scenario. However, most people would only buy one objective lens and one ocular lens, but even there you have five different possibilities. The objective lenses fit onto the ocular the same way you would fit a camera using a bannet fitting. This allows you to switch objective lenses at any time and means you can break the scope down in size. The combination of an STX with a 65 lens breaks down and fits comfortably into a binocular case, which makes it ideal for travelling!

It also has a built in eyepiece with 25-60x on the 65 and 85, and 30-70x on the 95. This means there are now two rings to turn on the main body of the scope. One is for zooming the magnification and the other for focusing - and for me this has really revolutionised the way I use a scope. It just works so perfectly that I wonder why it was not invented before. Now I can view through the scope and either focus or zoom with the same hand at the same time, and I don't need to take my eye away from the scope at any point. The ocular is also very wide and allows for an unbelievably wide field of view.

I was given a really unique opportunity to try all of them out in the field - and not just any field, but Icelandic fields! In the last week of May I headed to this beautiful island with two of my friends and colleagues from The Wildfowl & Wetlands Trust. Travelling with us were all of the components for Swarovski’s new modular system, and the aim of the trip was to make a short film about digiscoping using the modular system and new camera adapters. 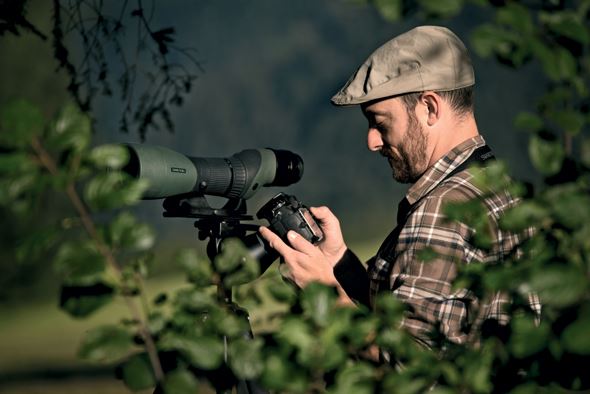 We rented an RV for the week and decided to try and circumnavigate the whole of Iceland. Having the RV was a great advantage because we could stop anywhere, anytime, to sleep and eat. In Iceland, you can stay anywhere for one night with your RV, but must move the following day. We always tried to find a better sleeping spot each night, preferring the quiet isolation of 'the middle of nowhere.' We camped in some of the most stunning areas we had ever seen. I don’t think any of us will ever forget waking up below the largest glacier in Europe, or eating dinner with a dozen harlequin ducks floating past the window! Having the RV also meant that when we came across an interesting geographical area, or an area populated with birds that we wanted to capture on film, we could stop for as long as we needed. It also became a perfect mobile editing room for Ed, where he could begin to piece together over nine hours of footage to make a fifteen minute film!

It's fair to say that we were not blessed with good weather during our stay. Most days were either raining, or very dull and cloudy. During our time in northern Iceland we also had a fair amount of snow, including snow drifts that were three times higher than the RV, but the dull weather did at least add a rather dramatic aspect to the film and a perfect opportunity to really test the scopes. In fact, all three preformed incredibly well even in misty conditions, but of course the bigger the objective lens, the more light you let through. So the 95mm objective was the real powerhouse when it came to light transmission, although the 65 was also outstanding in dull conditions and would be my first choice for travelling.

Despite the weather, we had an incredible week and probably got to see far more of the country than the average visitor. We often went several days without seeing another person to talk to, other than each other. Even when we stopped for fuel, the petrol stations were unmanned. Towns that appeared to be a reasonable size on the map turned out to be just a few houses - but that's the Iceland we wanted to experience, the real wilds of the north. Other than birds calling or the wind blowing, you could hardly hear a sound at night. I say 'night' in the loosest context, as we had twenty-four hours of daylight. The few people we did meet were all very friendly and extremely helpful.

Unlike the weather, the wildlife did not let us down and we saw so many great things. The most striking aspect was how well we saw them; birds in Iceland seem to have no fear of humans and gave us magnificent views. The brightness and amount of detail these scopes offer really did blow us away. At one point we were watching a female Red-necked Phalarope in breeding plumage on a very misty morning. We were fairly close but with the zoom on full 70x it was still a wide angle and unbelievably bright. Seeing birds like this also offered us the chance to get some great photographs and video.

Both the STX and ATX can be used with two new camera adapters: the TLS APO adapter for DSLR-type cameras and the DCB II Swing adapter for smaller compact cameras. Both fit onto a very small sleeve that you leave permanently on the ocular. The DCB II also has a neat function where you can flip it up and out the way while you locate a bird, then click it back down and lock it into position. This allows you to very quickly find, and then photograph birds with ease.

The other adapter, the TLS APO, was great for our SLR cameras, and allowed us to get high-resolution photographs and some quite stunning video. Something that's really great is that you can attach it to your DSLR and hand-hold the whole thing for photographing birds in flight. This worked superbly well in one south-western part of Iceland where there were lots of hunting Great Skuas. I hand held my SLR on an ATX85 with the TLS APO and got some great shots of these great birds bombing past. 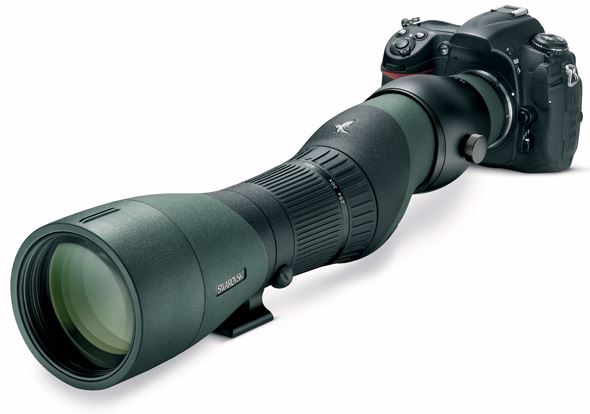 It was a real treat to see some of the birds we only see in the UK as migrants or winter visitors, nesting in their breeding grounds. One fond memory involves a pair of Purple Sandpipers doing a one-winged courtship salute on the tundra in broad daylight, even though it was actually almost one o'clock in the morning. I felt invisible as the sandpipers carried on around me as if I wasn't even there. Luckily, I had my SLR on an ATX85 at this very time and was able to fire off a whole series of photographs very quickly.

Each scope had its own unique advantage during our stay in Iceland. The 65mm was the best if we were going for a long walk or climbing mountains, while the 95mm was the perfect choice for seawatching and for viewing birds during the twilight hours. It was the 85mm, however, that was the real winner for me - a truly outstanding all-round scope.

Iceland was the perfect location to try out these scopes and having them with us definitely enhanced this beautiful country. Both Joe and I had so much fun digiscoping birds; it was great to have the time to experiment with different settings and equipment. Joe had not been digiscoping for very long, however, the modular system is so easy and quick to use that he was taking better photographs and video than me by the week’s end; ease of use is one of the great things about Swarovski’s equipment.

We hope that everyone who sees the film will enjoy it and go away thinking how easy it is to get great shots of wildlife with the right equipment. I hear a lot of people say that digiscoping is not easy, but it really is - and it's even easier with the modular system. The results speak for themselves, as I hope you can see in our film.

How to photograph wildlife in the landscape

Guide to choosing binoculars for birdwatching