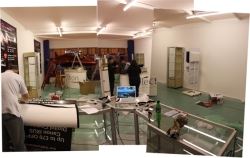 The first of what will hopefully become an annual event, The Gadget Show Live occupied Hall 1 of the Birmingham NEC from 17th – 19th April.  Anybody who’s ever been involved in the set up of a show like this will know how much hard work goes in to getting the stands and displays set up, but how, somewhat miraculously, it all seems to come together at the 11th hour.  The Wex Photographic stand was no different.  Missing boxes, crumpled banners, and a collection of extension leads that, although having been neatly wound and packaged in a cardboard box, had managed to entwine themselves into some kind of serpentine mating ball.  These things were sent to try us.

By the time the WEX and Canon teams abandoned the NEC with our stand more or less complete at 9pm, it didn’t look like the rest of the hall would have a chance of being ready in time and that the public would be wading through boxes and packaging. We needn’t have worried though.  Overnight the NEC’s magic show pixies must have been in waving their wands and tidying up in a fantasia fashion, because when we arrived back at 8am on Friday morning, the hall had been transformed. 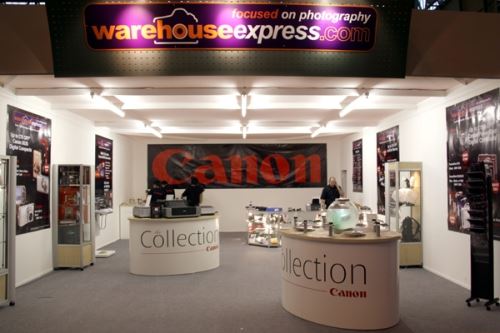 Almost from the moment the Gadget Show Live opened its doors for the first time ever at 10:00 on Friday morning, we were HEAVING!  Lots and lots of people visited our stand each day, taking great interest in the gadgets and gizmos we had on display, many of them making purchasing their own little piece of photographic wizardry!

Amongst the more popular displays in our area were the Selphy printers, compact cameras and in particularly, the new Canon Powershot D10 camera.  The Canon guys had chosen to demonstrate its tough and waterproof build by suspending one in a fish-tank for the duration of the show.  As we were closing up at the end of day one, a young fellow exhibitor from a different stand suggested we put actual fish in there with it.  I advised her that we had, but that the fish were unable to survive in the water as they were allergic to the rubber on the Canon’s grip and had died.  As such, I explained that we only put the fish in at the last minute in the morning and would scoop them out as they died and pass them to the food hall for use in their ridiculously overprice sandwiches. Watching the horrified look spread across her face I quickly retracted my story and instead told her that fishes’ fins are not designed for operating cameras and their heavy flippered-ness would most likely break the D10 which is why we left them out.  Seemingly happy with this explanation, she went on her way.

Gullibility was seemingly rife on our stand.  On Saturday evening after Angela, our event organiser, commented how lucky we were to have a Red Arrow jet directly opposite us, we explained the great lengths they’d gone to to get it there.  We described how the only way they could get in to the NEC was to fly it there, and that the NEC had opened the partitions between halls 1 to 20, creating one long, large, corridor like hall.  We told her how the NEC’s roof was retractable, much like the new Wembley Stadium, and that with the partitions removed and the roof retracted, the NEC was basically one long runway on which the Red Arrow could be landed before being parked in its exact show place.  Eventually straight faces crumbled and the gag was revealed, but not before much embarrassment had been caused!

The RAF chaps were very friendly gents, even giving our very own Dean Youngs the opportunity to play Top Gun in their jet!  Slightly less friendly but far more amusing to the rest of us is when a couple of the Canon Lads were tied together by the RAF gents and challenged to separate themselves without untying anything. They managed it eventually, with a little help from their friends, but not before finding themselves in some rather (ahem) compromising positions.  You can’t help but wonder where the RAF learns these bondage techniques.  From the navy, perhaps…

One of things that was nice about this particular show was the opportunity to meet a whole bunch of people we would normally not get the chance to see.  Likewise, many of the people visiting the show and the Wex stand got to see and play with products they may never had had the chance to view previously.  Another display getting a lot of attention was the camcorder stand, where two of Canon’s latest offerings in the camcorder market were tethered to a large HD television screen. 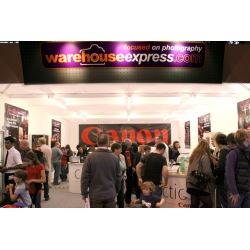 Despite the thronging crowds on the Wex Photographic stand, I managed to find a few minutes each day to slip off in to the show and see what was on offer.  The answer?  Lots and lots of toys.  From reclining chairs that could give you a full body massage to chairs you could plug into your games console for the full racing car experience, from a test track on which you could try out the latest personal transport devices to a test track you could race a Dyson around, from flat screen TVs to car mounted TVs, from race simulators to race bikes and from headphones to head cases, there was just so much to take in. 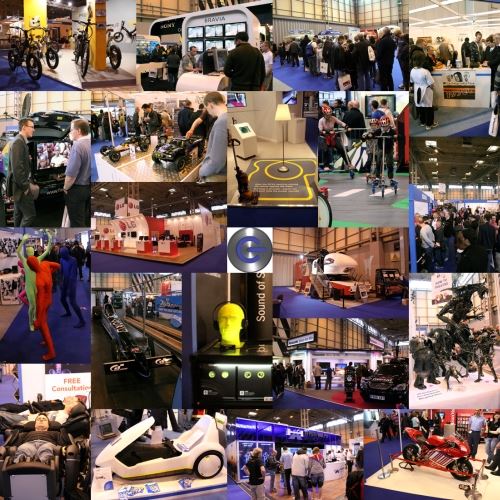 We can’t all be as lucky as Jason Bradbury from the Gadget Show itself, who could be caught testing all kinds of fun things after the public left the show for the day.  It became clear that far from simply being a presenter on the show, he is a confirmed gadgeholic himself.  He also made the wheeled gadgets he was flying about on look remarkably simple to pilot.  Luckily I never got the chance to try them myself, or I may well have been writing this from hospital.

If the show seemed to go up overnight, it seemed to come down in a matter of minutes.  Once the public had left the show on Sunday evening, all the exhibitors set about dismantling their respective stands as quickly as was humanly possible.  It was a fantastic show, but hard work and very tiring, and after three packed days at the show and the dismantling of the Wex Photographic stand, it was nice to be in the van on the way home.

The good news is that the show is due to return in 2010 and I’ve no doubt it will have grown even bigger by then.  The bad news is that if I end up going again next year, either as an exhibitor or as a visitor, I may well bankrupt myself in the process.