The Hottest Place on Earth | Landscape Photography in Death Valley

Landscape photographer and YouTuber Thomas Heaton travels to California’s Death Valley, but not everything goes to plan…

A large part of photography is down to luck or at least, that’s what people would have us believe: ‘Nice shot! You were so lucky.’ I’ve started to believe that you make your own luck. And, strangely enough, the more I do, the luckier I seem to get. There’s no denying it, the conditions I experienced during my short time in Death Valley were incredibly unusual; it’s one of the hottest and driest places on Earth. So, as per usual, I took the great British weather with me…

I arrived at Death Valley National Park in the early hours of the morning. It was still dark and the rain was falling. But it wasn’t the flash flood you might associate with an arid climate; it was wet and relentless, much like an autumnal day in Scotland. 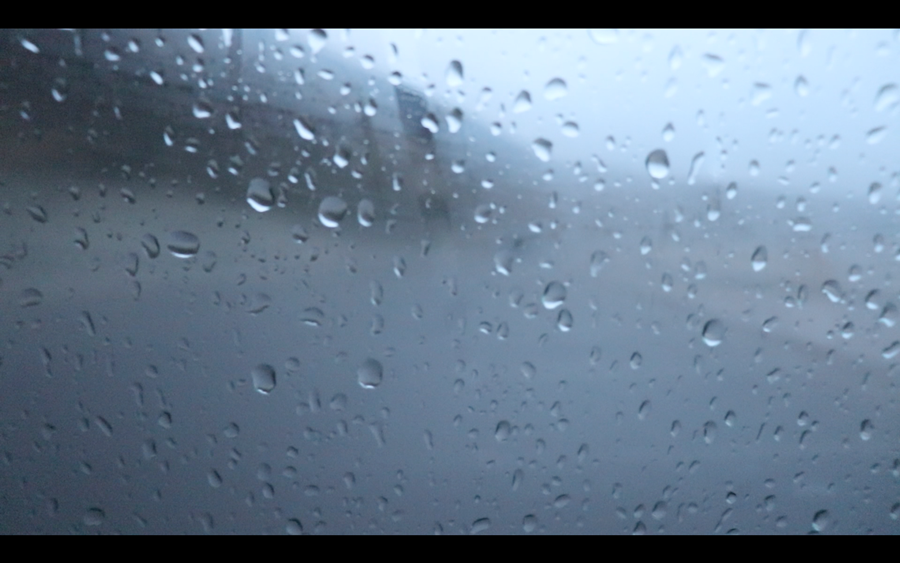 All photography by Thomas Heaton.

Maybe you think me unlucky? No way! Rain in a desert landscape offers an opportunity far greater than any epic sunrise; it offers the chance to capture something different. This was my chance to photograph a familiar landscape in very unfamiliar conditions.

I sat in the car and waited for dawn to break. I expected to look out across endless salt flats and see the towering mountains that dominate the western edge of the valley. But as the ambient light increased, I struggled to see… anything. The rain had reduced the visibility so severely, I thought about calling it a day. Everything would get wet and there was quite literally nothing to shoot. But after a few minutes, it suddenly occurred to me – I might not be here again for a long time. So, I made myself a coffee, put on my waterproof and headed out in to the empty void with my camera.

I was so glad I did.

Yes, I was wet and cold, but I also had the place to myself. The environment was sparse – almost a whiteout – with the exception of these beautiful hexagonal salt formations on the ground. They almost looked like snow! These were the formations I had come to photograph, but I had never expected to shoot them in such unusual conditions. 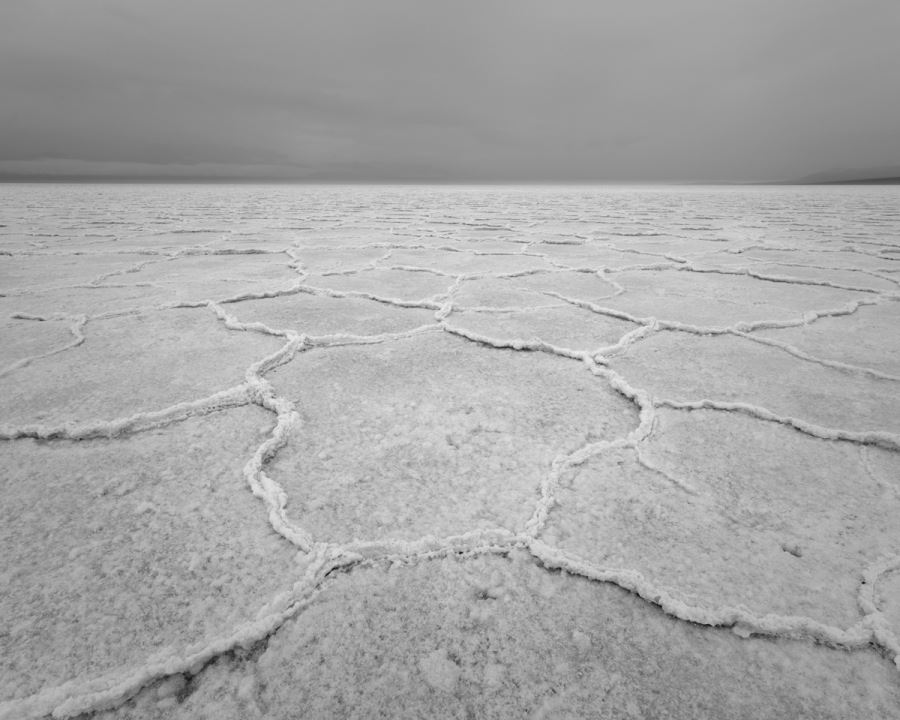 There was very little to consider with this image, other than finding an attractive and symmetrical shape to place in my foreground. The rest didn’t matter too much as there was nothing in the background to compose. I wanted to ensure the scene was sharp from front to back and because my wide angle lens was so close to the foreground, I used focus stacking to increase the of field. The image is simple and minimalist. I opted for black and white processing because it very much fits the mood of the day. It also enhances the emptiness of the photograph.

Don’t know how to focus stack? READ OUR TUTORIAL.

The rain cleared later in the day, so I revisited the same location. I hadn’t planned on photographing the salt flats twice, but I knew the vastly different weather would allow me to capture two very different versions of the same scene. 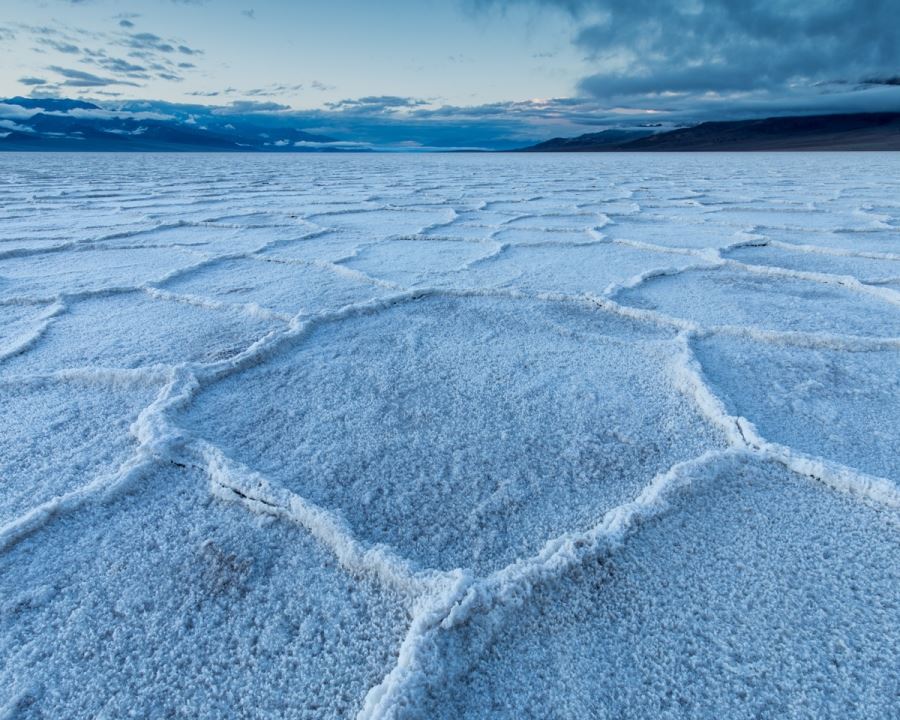 This image is almost a carbon copy of my early black and white version. The main difference is that I found a better salt formation to work with, and this time I had a background to include. I used the same focus stacking technique; I took three identical images, all focused at different distances – using a 2-stop graduated filter to hold back some of the brighter areas in the sky. The images were then stitched together during post. This image is a great example of why we should revisit locations time and time again. The difference in weather and light can dramatically change how a location looks and feels.

After a long day of exploration and photography I found myself a campsite, set up my tent and crawled in. I was damp and exhausted, but at least tomorrow would be a little more straight forward or so I thought. The next morning I awoke to a thick layer of fog hanging in the air. I couldn’t see more than 50ft ahead of me. This is odd. I thought to myself. Could it be? No, surely this can’t be a cloud inversion. Not in Death Valley – that’s unheard of. I assumed the fog was localised. I went for a drive, expecting to pass through patches of mist, but after a few miles it became apparent that this wasn’t just patchy fog. Game on!

The only way to shoot a cloud inversion is to get high above it. I drove to a well-known view point, Dante’s View, which sits 5000ft above the salt flats I was shooting the day before. When I arrived, it was still dark. I waited for my eyes to adjust and I couldn’t quite believe what I was seeing. 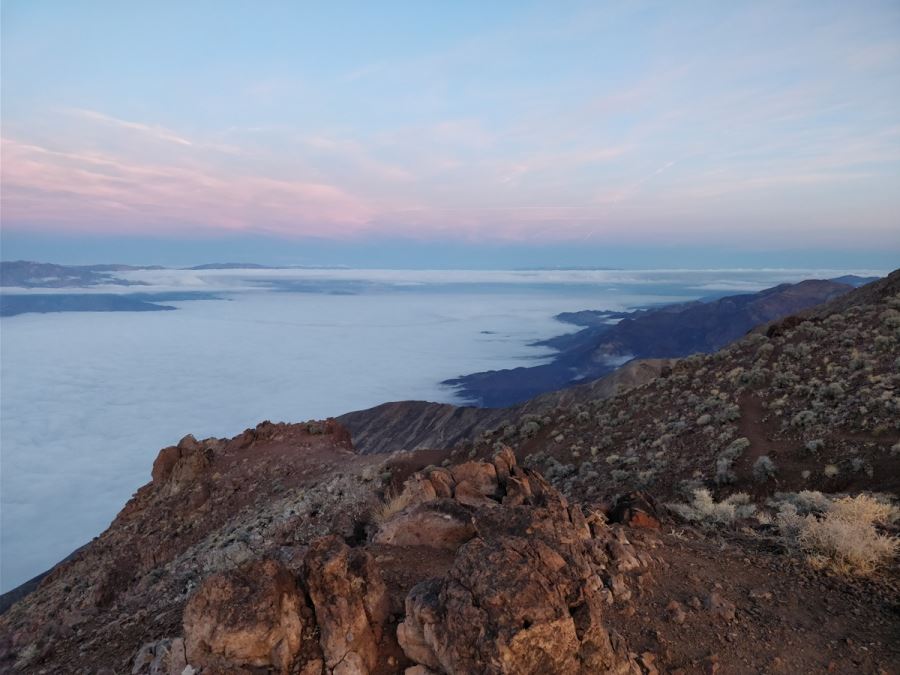 As far as the eye could see, the valley was filled with thick cloud, lingering far below. It was ebbing and flowing like an ocean. I grabbed my camera and ran as fast as I could up a nearby trail, hoping it would lead to a clear vantage point. I now had an unobstructed view over all of Death Valley. The sky behind me was starting to catch fire as the early morning sun began to rise, casting a beautiful pink glow onto the valley’s snow-capped mountains. I fumbled with my camera and wrestled my tripod in to position for the shot of a lifetime.

I wasn’t sure how best to capture the scene in front of me. My instincts were screaming at me to go super wide and squeeze everything in, but I wanted more than just a simple view. I assessed the scene and decided that a panorama would be a good option. The mountain range to the west was perfectly straight and uniformed; the snow on the summits complimented the white clouds beneath and the subtle pink glow on the mountains complimented the subtle colours in the sky.

I had wonderful layers, beautiful cloud detail and conditions almost unheard of. A panorama was the right choice; it worked aesthetically and would give me an enormous RAW file to work with, meaning I could make large prints. I levelled my tripod, focused my lens and very carefully worked my way from left to right. I couldn’t mess this up – not now with this stunning scene before me!

I went back to my campsite and wasted no time importing my files and stitching the images together. It was a nervous wait, but I had nailed it. I breathed a sigh of relief, knowing I had captured a truly rare event. Luck was certainly on my side on this trip.

Thomas Heaton is a landscape and travel photographer, filmmaker and YouTuber. He started taking photography seriously at the age of 16 and hasn't looked back since. Find out more about Thomas' adventures via his website.

11 Reasons Why Photography Is the Best Hobby Ever!