The story behind the photo with Richard Peters

Last week we announced our support for the British Heart Foundation's (BHF) Red for Heart photography competition. The BHF is asking entrants to snap a photo that incorporates the colour red, so to give you a little inspiration, a range of photographers will be sharing a photo they've taken that features the colour red on the WEX blog over the coming weeks - starting today with this fantastic image by wildlife photographer Richard Peters... 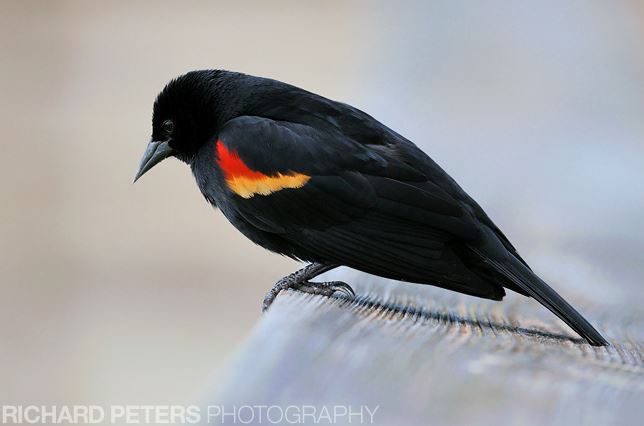 The photo was taken in the beautiful sunshine state of Florida, in the Spring. Unlike the female, which is a different colour completely, the male Redwing Blackbirds have this lovely subtle splash of colour on the shoulder of their wing and I had wanted to get an image that showed this off, especially as when they fly that flutter of red and yellow in the black looks spectacular. So, I had my camera set for flight shots, which were not coming to hand very easily. However, this male landed just behind me on part of the broad-walk I was standing on, so I quickly spun round and fired off a couple of shots before he took to the skies again.

What kit was used to create this image?

What effect do you think using the colour red has had on this image?

I like the way the splash of colour brightens an otherwise quite subdued image. It's placement within the black shape of the Blackbird helps break up what would otherwise be quite an undefined area of the bird itself. But here, the colour emphasises the shoulder, which not only draws your eye towards the birds head and that all important eye contact, but also allows you to clearly follow the shape of the wing as it leads back down towards the tail.

For me, it's simple, clean and a good less-is-more type of shot. The shallow depth of field allows your attention to be held on the bird and despite the perch being man-made, the small slither of in focus texture in the wood gives just enough detail to ground the bird amongst all the lovely bokeh of the out of focus surroundings. I also like the empty space for the bird to look in to. I don't think the image would work as well if the 'perch' or anything else broke the area between the bird's line of sight and the edge of the frame.

The photo also breaks the rules a little as the main subject is pretty much slap bang in the centre of the frame. However, the left hand side of the image is clean and simple with just the bird's gaze as the main feature, which then leads to that lovely hint of colour before following on to the strong shape of the bird which cuts through the frame at a diagonal, leading us down through the photo and feather detail of the birds body and those lovely wood grain textures.

What (if anything) would you go back and change if you could take this photo again?

I know there was a little more colour tucked in under those feathers so it would have been nice if just a tad more of it was on show. And of course, I never did get that flight shot I was after...

To find out more about the Red for Heart photography competition visit bhf.org.uk/redphotos

Richard Peters is a professional photographer based in London, whose main interest is in wildlife and nature photography. Richard was recently on the judging panel for the I AM NIKON photography competition and has his own blog at http://www.richardpeters.co.uk/blog/