Tom Mason in Peru – Part 2: Into the Amazon Rainforest

In the second of a three-part series on his Peruvian adventures, Tom Mason ventures into the Amazon Rainforest. 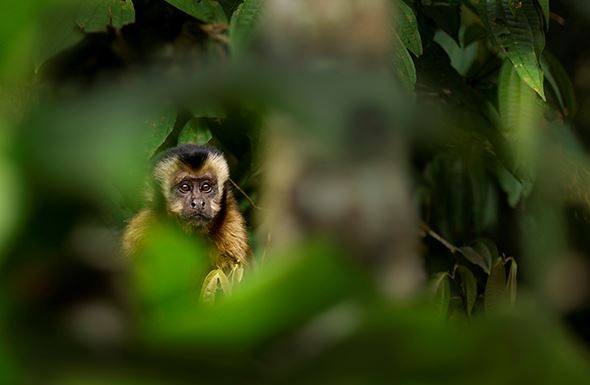 My next adventure started with a nine- hour drive into the cloud forest. As car journeys go, I’d say that traveling from Cusco down into the rainforest has it all: amazing scenery, wildlife and culture, as well as a constant feeling of imminent death. The road is both a blessing and something of a nightmare; if you don’t like heights then I wouldn’t recommend it. Passing over the Andes, the road runs around high mountain passes where steep drops of 1000ft are common. The road itself is essentially just a well-used wide dirt track, with no markings or barriers. After making certain I bagged a window seat before we left, there were times when I wished I hadn’t. Now and again I would see the wheels of the van tentatively hanging on to the edge of the road, as we slowly edged passed oncoming vehicles – a couple of inches to the left and the seatbelt would provide little in the way of help. 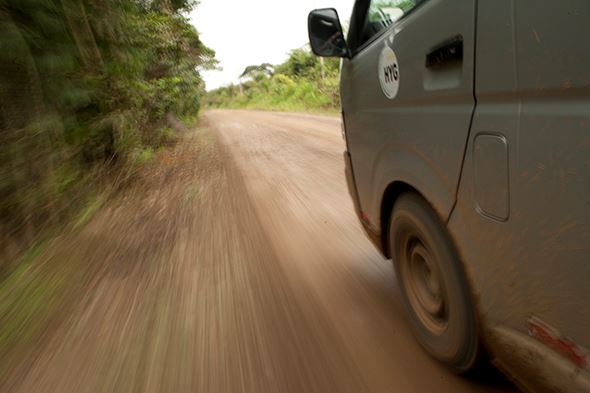 Speeding along the dirt track road didn’t always give the safest of feelings! (Tom Mason)

After a while, however, the worry of road gave way to the sheer enjoyment of the impressive scenery, with the lack of barriers giving an uninterrupted view of the surrounding peaks. Stopping periodically to take some images, we also had a chance to visit a number of the small towns found along the route. To me, the people of these remote communities were the real Peru. The native dress was not for show like in Cusco, but the true clothing they wore daily. The colours and hats symbolize the origin of a person, with each one representing a different town in the locality. Walking around it was amazing to see the hustle and bustle of the market in this remote village, with people buying whole sacks of food before making the long journey back to their homes. After an hour, our guide signalled for us to get back into the van, as we still had a long way to go before we reached our destination. After a few more hours in the van we crested over the highest peak on our journey, before beginning our descent into the forest below.

The scenery had now completely changed. Gone were the expansive views of the mountain landscapes, now replaced by the dense rainforest which stretched for miles on the slopes of these lower peaks. One of my first observations was the temperature; on leaving for Peru I had expected the heat and humidity to be very high, however standing on the road, looking into the rainforest, it was quite the opposite. After talking to our guide I discovered that the reason for the chill in the air was due to a phenomenon called friajes. Friajes are caused when cold air from the Southern Ocean is blown up through Patagonia and over the Amazon basin. This results in the whole area temporarily shutting down, diminishing the amount of activity in the rainforest. The high numbers of insects and birds usually seen in a day drastically reduce as they try and find shelter and warmth, away from the cold air. 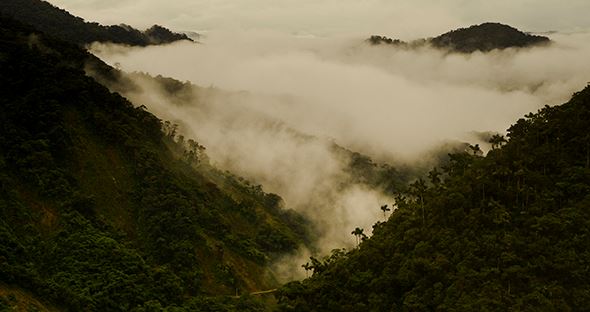 The view down into the Cloud Forest below, one of the most impressive I have ever witnessed (Tom Mason)

Many people visiting the Amazon would no doubt be annoyed by this unfortunate weather, but to me it added a new dimension to the trip. It showed the two sides of the rainforest and an insight into the region’s climate, one that few are lucky enough to witness. Quizzing my guide further about the regularity of these meteorological phenomena, I was informed that Peru usually experiences three or four of these in a year, each lasting between three days and two weeks. I started to worry about how this might affect our trip, although my guide quickly assured me that, at this time of the year, they generally only lasted for a few days at most. Worry over!

After another couple of hours making our way down through the cloud forest, we arrived at our accommodation for the the next two nights, the Cock of the Rock lodge. The hotel is famed for its location close to the Peruvian Cock of the Rock lek, and as soon as we managed to get out of the van we were told to get ready to visit the hide. Making our way back up the the road, we could hear the incredible sound of these fascinating birds preparing at the lekking site.

Peru’s national bird, these bright red, pigeon-sized wonders are found in large numbers in the morning and evening at locations called leks. At these areas in the forest, the males display and fight in order to attract the attention of the surrounding females. Some of the leks have been in the same location for more than 15 years, with the birds coming to display every morning and evening. Standing in the hide and watching this was a wonderful experience. Their sounds filled the air as the males fluttered and displayed in order to capture female attention. After an hour or so, the winner was decided and he triumphantly disappeared off into the rainforest with his female in tow, leaving the less fortunate males to head back into the jungle, defeated and alone. 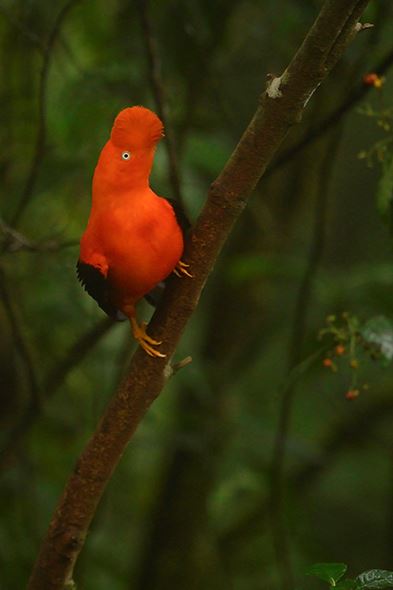 Peruvian Cock of the Rock stands proud at the lek, before displaying to the surrounding females (Tom Mason)

After watching the lek we started to walk back to the lodge. It was now just after six o’clock and already it was pitch black. Due to its proximity to the the equator, Peru has very defined daylight hours, with the sun rising at six in the morning and and setting at six in the evening, with very little in the way of variation. With no electricity in the forest other than a generator that was put on for two hours a day, candles and torches were the only light sources available. Strapping my head torch on I walked back to my room, getting changed before heading down for dinner.

I had been told about the impressive moths and insects of the jungle, although I didn’t imagine my first encounter would go the way it did. As I walked out of my room I wandered down the path listening to the sounds of the jungle, tree frogs in the surround and the buzz of insect life. Suddenly, and out of nowhere, a huge flash of wings smashed into my face, legs and wings flailing around in the half light, like a scene from a sci-fi movie. I was struck repeatedly on the face and a moment of panic ensued. Finally, I realised the assailant was nothing more than a gigantic moth attracted to my head torch like a homing beacon. The attacks ceased as soon as I turned off my light; on inspection of the terror, I discovered it was a beauty, easily 20cm in diameter with purple streaks on its wings. It had already proved to be a long day, so after dinner I retired for an early night, ready for another early morning.

I awoke at five o’clock the next morning. Pulling on my kit and throwing my bag on my back, we headed back to the lek for another morning’s shoot. After a few hours we made our way back for breakfast, what turned out to be another unforgettable experience. Not only was the food fabulous, but we were joined by some unexpected visitors – a group of brown capuchin monkeys! Dropping in from the trees, they ran along the roofs of the lodge before raiding the fruit left out for breakfast. Everyone dived for their cameras, before firing off frame after frame to capture our encounter with these charismatic creatures. Hours passed and still we were shooting before finally, bored of raiding, the monkeys ventured back into the forest and out of view. My first ever encounter with wild monkeys and something I doubt I will ever forget. 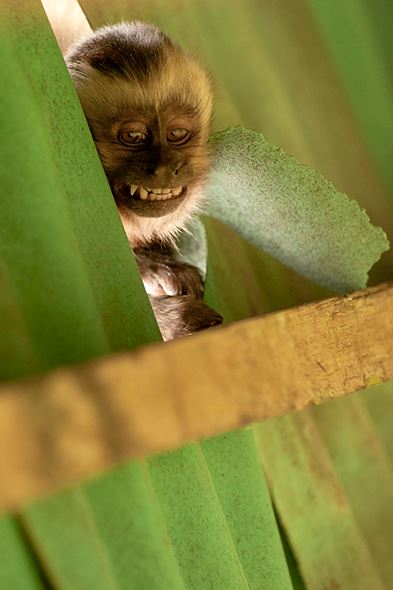 The rest of the day seemed to pass quickly. We took numerous walks into the forest, finding new species at every turn. The landscape was one of mystery and intrigue, with the vines and trees obstructing the view, meaning we could only catch glimpses of passing species. After a long day we stood silently on the road in the evening gloom, waiting for a nightjar. An hour or so later, and with no luck, we made our way back to the lodge. Turning in for the night, we prepared for the next long drive down into the Amazon basin below.

Another epic leg of our journey completed and another amazing insight into Peru, from the terrifying drive into the rainforest to our amusing breakfast-time companions. The rainforest was already revealing its secrets, but as we ventured ever lower into the Amazon Basin it was clear that some of the best-kept ones were still waiting to be discovered…

Next time, Tom concludes his trip with a night walk in the jungle. Don’t miss it!

Tom Mason went to Lima with the Crees foundation.

Tom Mason in Peru: Part 1 – Into the Andes

How to photograph wildlife in the landscape