An interview with photographer Sue Flood

Sue Flood is a photographer and wildlife filmmaker who specialises in capturing polar and marine environments. Before she became a full-time photographer, Sue worked with the BBC for 11 years in their Natural History Unit where she was an Associate Producer on the award-winning series 'The Blue Planet', and also more recently on 'Planet Earth'.

She is now a professional photographer whose clients include the BBC, Discovery Channel and Animal Planet. Sue has just launched her first book Cold Places, a spectacular collection of images from her time spent in the world's polar regions and we have one signed copy to give away, just leave a comment to enter! (more details below).

We sat down with Sue this week to find out more about her photography in some of the coldest places on Earth...

My father was a keen photographer and I bought my first camera when I was at school. I got really serious about photography when I was at the BBC working in the Natural History Unit, that’s when I got a chance to take some photos and start getting some decent results.

When was your first trip to the polar regions and how did that opportunity arise?

My first trip was to the Arctic in the late 1990’s and that came about because I was working on the BBC series The Blue Planet. I travelled there with producer Martha Holmes and cameraman Doug Allan and it just blew my mind, it was fantastic. 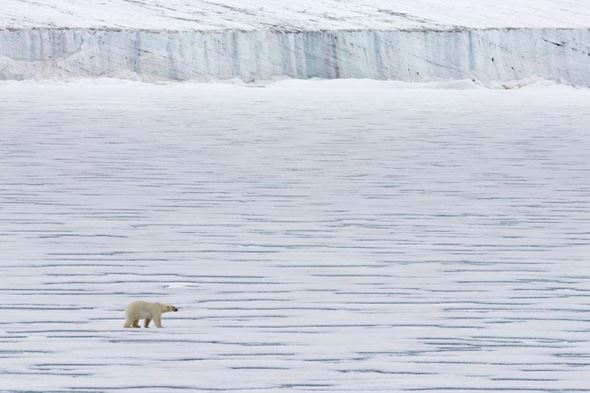 What is it about photography in the Arctic & Antarctic that keeps you going back again and again?

The places themselves are so stark, beautiful and just so remote. The wildlife is fantastic too, whether it’s the world largest land-predator in the Arctic (the Polar Bear) or being surrounded by adorable Emperor Penguin chicks in the Antarctic.

Do you have a favourite image from your book Cold Places and why?

I really love the photo of the two Emperor Penguins with the chick and I’m very fond of my black and white, almost abstract image of the Ross Ice Shelf.

Another one of my favourites is the one of the Polar Bear hunting - I like that shot because it really shows the Polar Bear at home in its environment.

Do you think photography is important in promoting environmental awareness?

Definitely. There’s no doubt that you can grab people’s attention with a picture. A striking image can draw people in, whether it’s a really graphic one or a really beautiful image. It’s certainly something that drives me because I want to get people interested in the natural world, whether it’s through still images or moving images. That’s what I loved doing with The Blue Planet and Planet Earth, and that’s what I love doing now as a photographer.

You must have countless stories from your travels to the Arctic & Antarctic – any one in particular that jumps out? 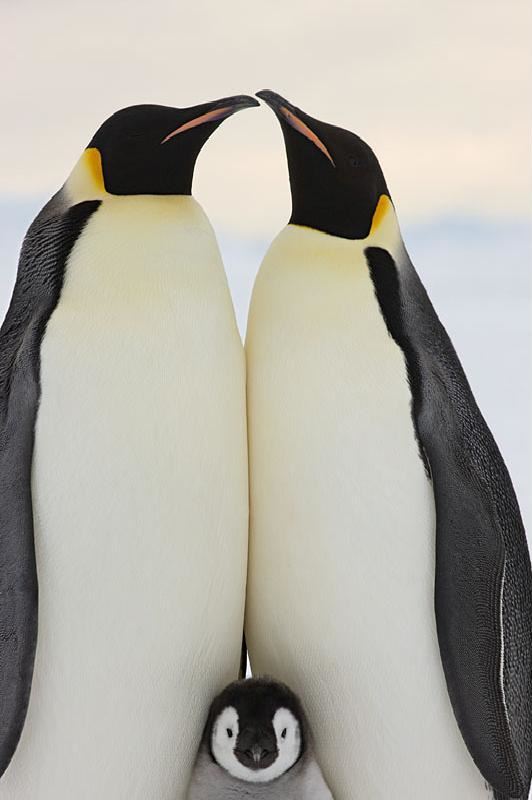 Emperor Penguin parents with their chick

A very special moment is connected to one of my favourite photos and that’s the large one of the two penguins and the little penguin chick. I waited a long time for that photo! There was one parent standing with the little chick, then the other parent came over and stood there and fed the chick. I knew exactly the shot I wanted so I just waited, and waited, and waited and all of a sudden they moved around just for a couple of seconds and that was it – it was so lovely.

Do you often have a particular shot in mind, as you did for this image, or is a lot of your photography spontaneous?

A lot of it is spontaneous. The Emperor Penguin image was an unusual one because I knew exactly what I wanted to get, but it’s still going to be the luck of the draw. A lot of times when I was working with the BBC, we would have a sequence in mind but there might be something that turned up on the spur of the moment.

One of the shots in my book is of a duck with an urchin in its beak. The duck was diving down to get these urchins and I watched this again and again, but I was trying to get the one particular shot that really encapsulated the duck’s behavior, it can take a long time… and it was about -25 degrees that day!

What are the coldest temperatures that you’ve worked in?

The coldest I’ve been in was -40 degrees and that was very cold! That was for a BBC series called 'Extreme Environments'.  I was actually camping under canvas that night, and when I woke up the next morning there was a sheet of ice down the front of my sleeping bag from where my breath had frozen in the night, that wasn’t very nice.

Practically, what challenges do you face shooting in such harsh environments?

I have to say, my camera gear has been amazing in the cold. I shoot with a Canon 1Ds Mk III and a 1Ds Mk II and I’ve found them to be very good in the cold indeed. Sometimes I’ll have to travel out by Inuit Skidoo over the sea ice and things tend to get knocked around, but I’ve never had a problem with kit being damaged – both cameras have stood up really well to some harsh treatment. 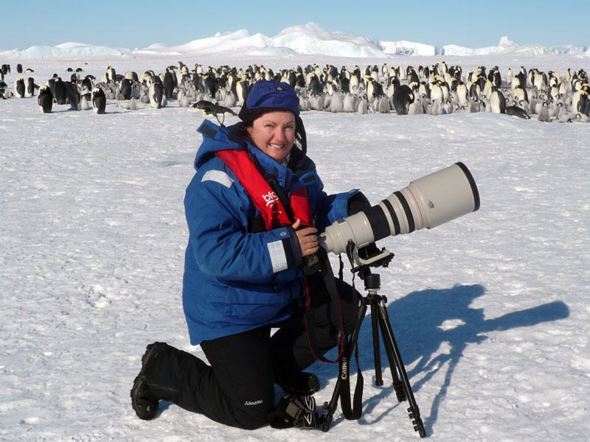 What else do you always have in your camera bag on a trip to the polar regions?

In terms of other equipment, if it’s very cold I usually have a little foam pad with me for when I’ll be lying on the ice for a long period of time. I used one when I shot the book cover image (below) of the penguins walking towards me. I lay on my stomach for quite a long time to get that shot. 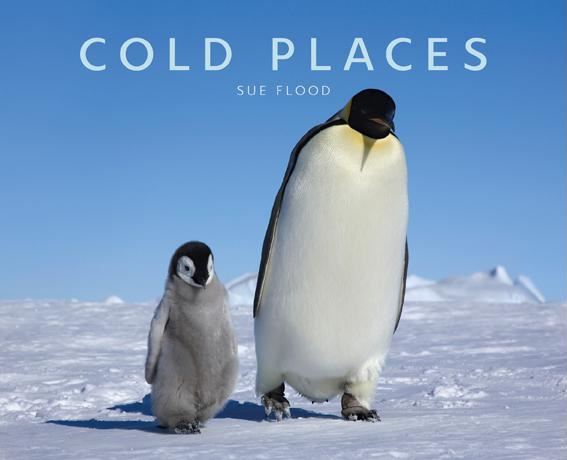 How do you take care of your equipment in such cold climates?

What I tend it do if it’s very, very cold is I wrap my gear in a towel or a bag and let it warm up a bit before I bring them indoors. Then I let them acclimatize slowly, otherwise they can get covered in condensation. If it’s really, really cold I’ll also keep spare batteries inside my jacket.

How long do you typically spend away on an expedition?

Depends on the shoot – for the BBC the longest trip I did was a couple of months and when I go on the Russian Icebreaker ships that can be for three months at a time. It can be quite testing, but fantastic for photography.

How did you get the opportunity to travel on a Russian Icebreaker ship? Was that during your time at the BBC?

It was actually after I left the BBC,  I got involved with a company called Quark Expeditions who run fantastic trips to the Arctic and Antarctic. I first worked with them when I was asked to go as a photography lecturer on a trip to the North Pole and I’ve done a few trips with them since, which has been really nice.

When did you make the jump into full-time photography? Was there anything in particular that sparked your decision?

I decided to leave the BBC in 2005 to go freelance because I was doing more and more photography on location and in my spare time, and I was starting to enjoy that more than being a BBC producer. I did enjoy being a BBC Producer, but being out in the field, seeing the wildlife and taking photos I just thought “this is what I want to make a go of”. People thought I was a bit mad to leave the BBC but it was a really great decision and I didn’t look back. 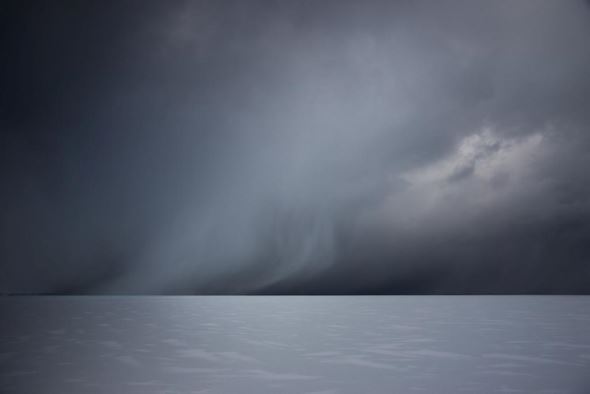 One of Sue's favourite images of the Ross Ice Shelf

Do you have any advice for those keen on pursuing a career in photography?

Make sure you want to do it more than anything else because it’s tough and it’s demanding – physically, mentally, and on relationships with friends and family if you’re away as much as I am.

It is harder and harder to make a living as a photographer but it depends on what you want to do - you don’t have to make a career out of it to be a really good photographer. You can be someone who enjoys doing it as a hobby who still has success and I know very, very talented amateur photographers who, frankly, have taken better pictures than many of us so-called professionals! But it is a fantastic job and if you really want to do it, stick at it.

When you’re not in the North or South Pole, what other subjects are you passionate about shooting?

I do really enjoy photographing wildlife, but I also like photographing landscapes and people. There’s always something wherever you are, you can’t just switch off from seeing photos– whether that’s in a café in London or in the North Pole.

What’s next for you? I saw that you’ve recently been to South America, was that for a photography project?

I’ve just been on a really great trip to Costa Rica to photograph Toucans and I really loved doing that. In the Autumn I’m off to Borneo, Thailand and Vietnam so that will be a rare chance to warm up!

Sue Flood's first solo exhibition Cold Places - From Pole to Pole is open at the Getty Images Gallery in London until the 9th of April. To find out more about Sue's work or to purchase her book, visit SueFlood.com.

We have a signed copy of Cold Places to give away! Leave a comment on this post to enter the draw, good luck!

1.1 Competition open to UK residents only.

1.2 Competition closes at 10am Monday 4th April, any comments submitted after that time will not be included in the draw.

1.3 The winner will be notified by email.

1.4 No correspondance will be entered into with any of the entrants.

1.5 Wex Photographic employees are not eligible to enter