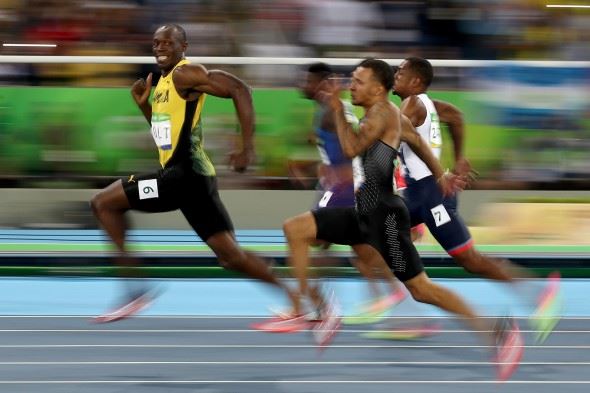 Major sporting occasions provide a wealth of opportunity for capturing special photographic moments, but every now-and-then a photographer captures something uniquely special. The image of Usain Bolt grinning at the competition over his shoulder above, by Cameron Spencer, is one such special image. Up to 600 photographers were capturing pictures during this particular 100 metre race, 11 of which were officially working for Getty, so Cameron could afford to take a risk and aim for something a bit different.

Jon Devo caught up with the Getty Images photographer in Rio to find out the story behind what is arguably the most iconic sporting image captured in 2016 so far. Read on for some insight into the settings, kit and technique he used to capture it.

On his equipment and settings

I used my handheld camera to capture this shot, the Canon 1D-X Mark II, with 72-200mm lens at 135mm focal length. I had to drop my shutter speed to about 1/40th of a second to capture this precise moment. My feet were steady on the ground when I took the photo, but I continued to move my lens, following Bolt’s movement with my upper body, panning the camera in perfect unison with the subject.

It’s not a simple technique to master but lends to a truly unique image. Using this approach takes a lot of practice and experience to come out with a great photo that captures the action. Shooting a pan with a slow shutter makes a static image more dynamic and creates a sense of speed. It’s a creative but technical way to shoot which can be hit or miss, especially the slower the shutter.

On the image’s popularity

There are many reasons a particular image might resonate with the audience. I’ve been shooting Bolt for many years and its easy to see what an entertainer he is. The stadium is his stage and he loves to perform for the crowd, a real showman who never disappoints. This image is a great testament to his personality, his confidence and his elite athletic abilities. We’ve seen his famous pose many times, but the cheeky grin he shot as his opponents made this image stand out from the rest. It was a moment captured in time that can’t be repeated, its truly something special. The reaction has been pretty incredible and I think the social media audience felt just as exhilarated as I did. Bolt has this contagious energy which the audience can really resonate with through that one moment captured in a still image.

I don’t think I would have done a single thing differently to be honest. I was anticipating Bolt passing his competitors at the 70-meter mark, so I positioned myself infield, focusing my lens on the subject. It was a big risk, choosing to pan the camera at a low shutter speed, however I’m quite please with the results.

Cameron Spencer is an award-winning Getty Images photographer, based in Sydney, Australia. He has been a staff photographer with Getty Images for 12 years, in which time he has covered several major sporting occasions including the Olympics and the FIFA World Cup.

Photographing motorsports with the Fujifilm X-T2