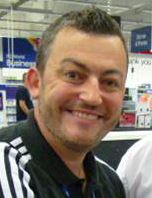 We caught up with Mark Baber, Assistant Product Manager for Lumix G, Panasonic UK, to talk about the new Lumix GX7. Among other things, he explains why Panasonic used an LCD rather than an OLED viewfinder for the camera, and also reveals why it produces the best image quality of
any Lumix G-series camera to date.

MG: Who is the new camera aimed at?

MB: We think this will appeal to DSLR users as a second camera, similar to the GX1. I imagine this will particularly interest those into street photography, as well as wildlife and those wanting to shoot video. From a design point of view, it’s the kind of cool, retro-style fashion accessory that some people would like to show off. We think it should appeal to those who don’t believe that the iA (Intelligent Auto) mode is the sole use of the camera, those who prefer to get creative with the PASM exposure modes.

MG: The camera features a new sensor and processor. Could you tell us about those please?

MB: Yes, the Venus Engine 8 improves colour reproduction by 10% over the previous Venus Engine 7. It’s also faster yet more eco-friendly, so there’s a reduction in power consumption. Working with the new sensor, it’s able to reduce noise by 25% over the GX1, and also gives an extra stop in low light, now at an extended setting of ISO 25,600.

MG: The sensor still contains 16MP as on previous G-series models, but this is a new design, correct?

MB: Yes, this isn’t a sensor we’ve used before. We’re very proud to say that it’s made by Panasonic, and it’s not simply a regurgitation of one we’ve used in previous models. We use different areas of the sensor to reduce noise levels at high ISOs, but more importantly there's more detail in darker areas; we’ve been able to tweak it to produce the best picture quality we’ve seen yet from a Micro Four Thirds sensor.

MG: The camera follows on from the GX1 but you’ve named it the GX7. Does that reflect the extent of change between the two?

MB: Yes – because there’s such a leap in picture quality, performance and overall style, it deserves to have a high number. It’s to show that it’s a premium product with excellent picture quality.

MG: The GX7's viewfinder is one of its headline features. What made you incorporate a tiltable electronic viewfinder? Is this in response to customer feedback?

MB: Yes, customer feedback. If you look in the marketplace there are cameras with built-in viewfinders but not tiltable ones. Rather than have this as external accessory as we’ve seen in the past we’ve been able to incorporate it into the body and make it unique; there’s no other camera on the market that can have its integrated viewfinder tilted to 90 degrees. We chose LCD over OLED because we were able to produce quite a fast refresh rate, and the result is comparable to an optical viewfinder. It’s unobtrusive and brings even greater flexibility when shooting. 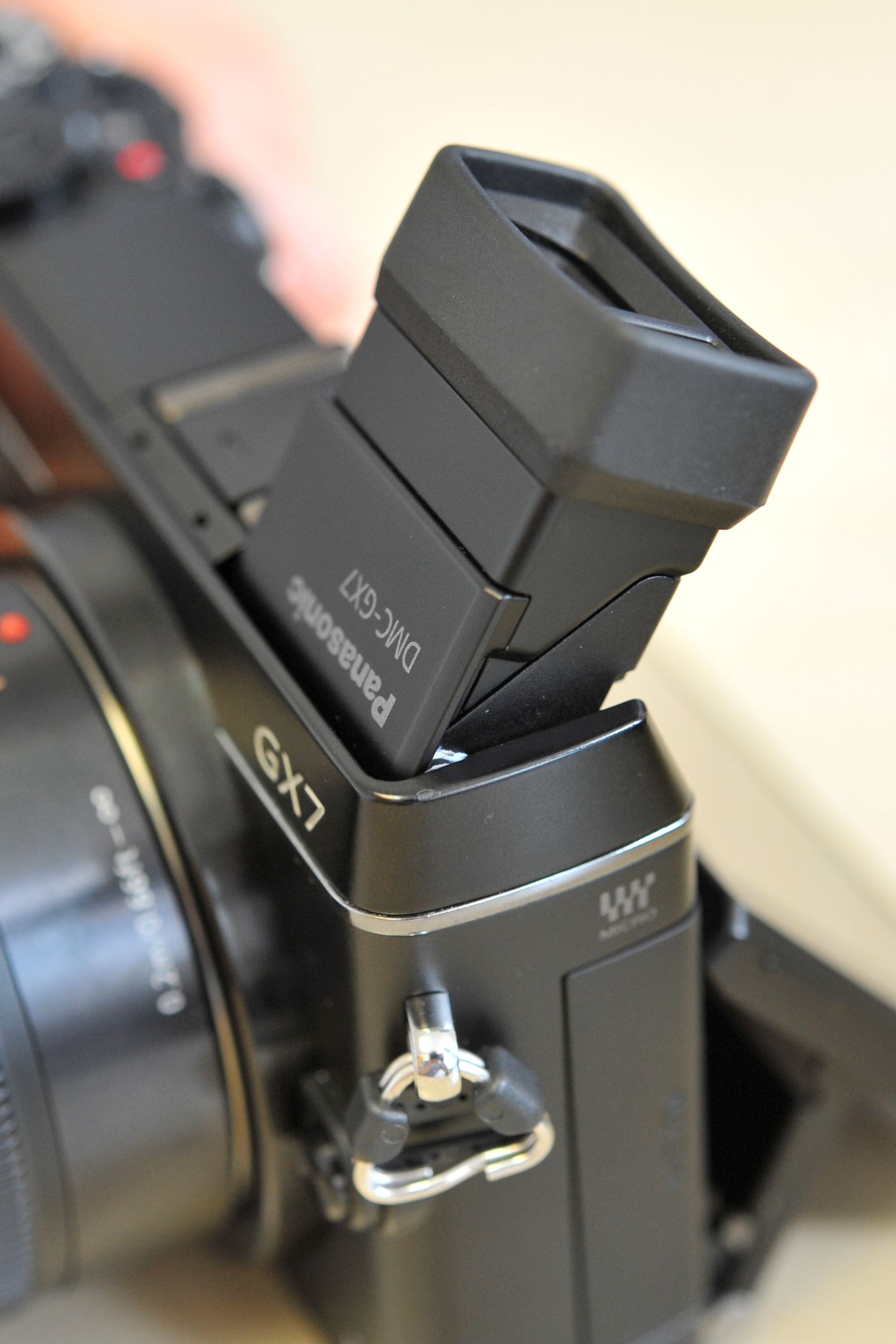 MB: Yes, it’s 2.76m-dot resolution viewfinder. It’s very sharp and bright, and I’ve not seen it produce any glare, rainbowing or anything else like that.

MG: And the screen – is that the same one as that on the Lumix GF6?

MB: Yes, it’s an In Cell touch LCD with 1,04million dots — very much what you find on a smartphone. You can pinch to zoom into images and swipe to move across, and you also have a 100% field of view. It's also linked to the AF system which means you can focus anywhere across the whole of the LCD simply by pressing the screen. MG: Another change from previous models concerns the image stabilisation system, which is now on the sensor (previously, Panasonic has incorporated OIS technologies into the lenses compatible with the G-series models) . What made you change that?

MB: Again, this is a result of feedback. It’s not something we’ve done before, but it makes it more flexible in that Leica and other legacy lenses with adapters can benefit. The system will default to the lens if the lens has an OIS system, so the lens takes priority — but, if the lens doesn’t have image stabilisation, you can rest assured the camera will take care of it.

MG: In terms of the compensatory effect of the new IS system, is it roughly the same as a comparable system found in a lens (up to 3-4EV stops)?

MG: There have been some changes to the Creative Controls too, is that right?

MB: The Lumix GX7 has 22 Creative Control options. With the monochrome options, the Dynamic Monochrome option has stayed the same, although you can change the blue and green hues to make the image more dramatic. We’ve now got a Rough Monochrome option with increased grain, and also a Silky Monochrome mode which makes the image softer. You can adjust these with either the physical controls or through the touchscreen; so, for example, you can extend the grittiness of the Rough Monochrome mode by just swiping left-to-right on the screen. Or, you can make adjustments more accurate using the thumbwheel. 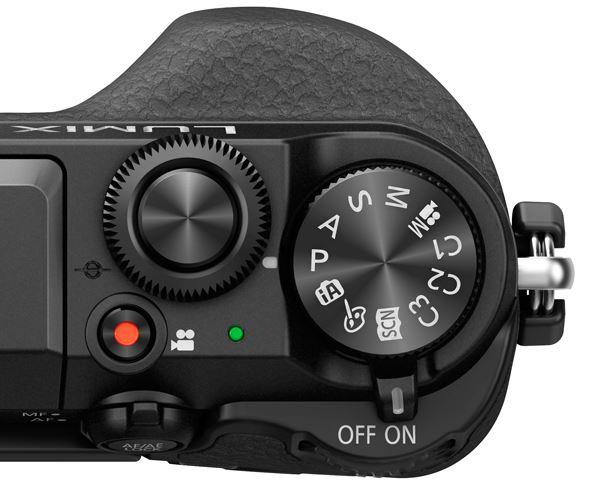 MG: Moving onto the body, in terms of its design it’s quite different from the GX1. Is this in response to feedback?

MB: Yes. It has a real premium feel, and on the silver version the brushed effect doesn’t look cheap in any way. Of course, the magnesium body has been very successful on the GH3, and it’s this kind of rugged body that suits a camera like the GX7. The way the mode dial moves, too — there’s that positive, solid click, and we've improved its sturdiness so it doesn't accidentally turn in your bag.

MG: Presumably the GX7’s Wi-fi and NFC functionality is similar to that on the GF6?

MB: Yes, you have the same ability. The Wi-fi area is found in the grip, although the chip has been repositioned from before for better contact. There’s very little, if any, lag between two devices, and it's used in conjunction with the same Image App as before, with full flexible control in both video and stills shooting. You’ve got the ability to push and pull focus through the app, together with control over the Creative Control, scene modes etc. There’s very little missing. 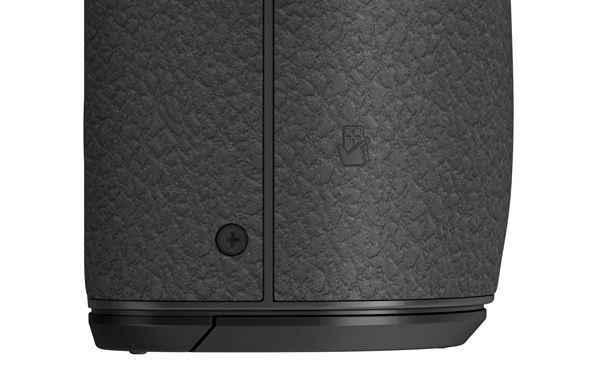 MG: Do you know what the Wi-fi system's usable range is?

MB: What we’ve found through events and roadshows is that you can generally get a good signal up to roughly 12m. In modern houses or outside it works fine, but in older houses it may be harder to get a Wi-fi connection anyway because of the thickness of the walls. It just works like a router at home because effectively it’s got a router built into the grip.

MG: One other change with the new model is the maximum shutter speed, now at 1/8000sec. Is that through a mechanical or electronic shutter?

MB: That's through a mechanical shutter, but there is an electronic shutter which allows completely silent shooting. When this is enabled the resolution drops and the ISO is limited, but it’s invaluable in those moments when you need it to be completely silent. Although it’s not a sports-photography camera, if you did use a higher-end lens with a long focal length and wide aperture at an event where you needed to be discreet - such as a golfing tournament - it’d be perfectly suited.

MG: And what about the camera’s video functionality?

MB: The sensor output is 50p at 28MBps, in AVCHD  - so really good high-quality video. There no headphone port but there’s a mini HDMI port together with remote and AV-out ports. There are also the Stop Motion and Time lapse options we've had on the Lumix G6.

MG: Can you tell us about the new kit lenses please?

MB: Sure. We have a brand new, metal-bodied Mark II version of the 20mm lens, with both Nano-coating and Multi-surface coating. So, more elements have been coated than on the Mark I version  to reduce flare and ghosting. We also have a new 14-42mm lens which will be the other kit option.

MB: Yes. If you think how many generations there are... there’s the standard kit lens, the Power Zoom X version and now this one. Although it’s not an X lens it’s still made in Yamagata to a high standard. It’s also an HD lens so it’s great to shoot video with. 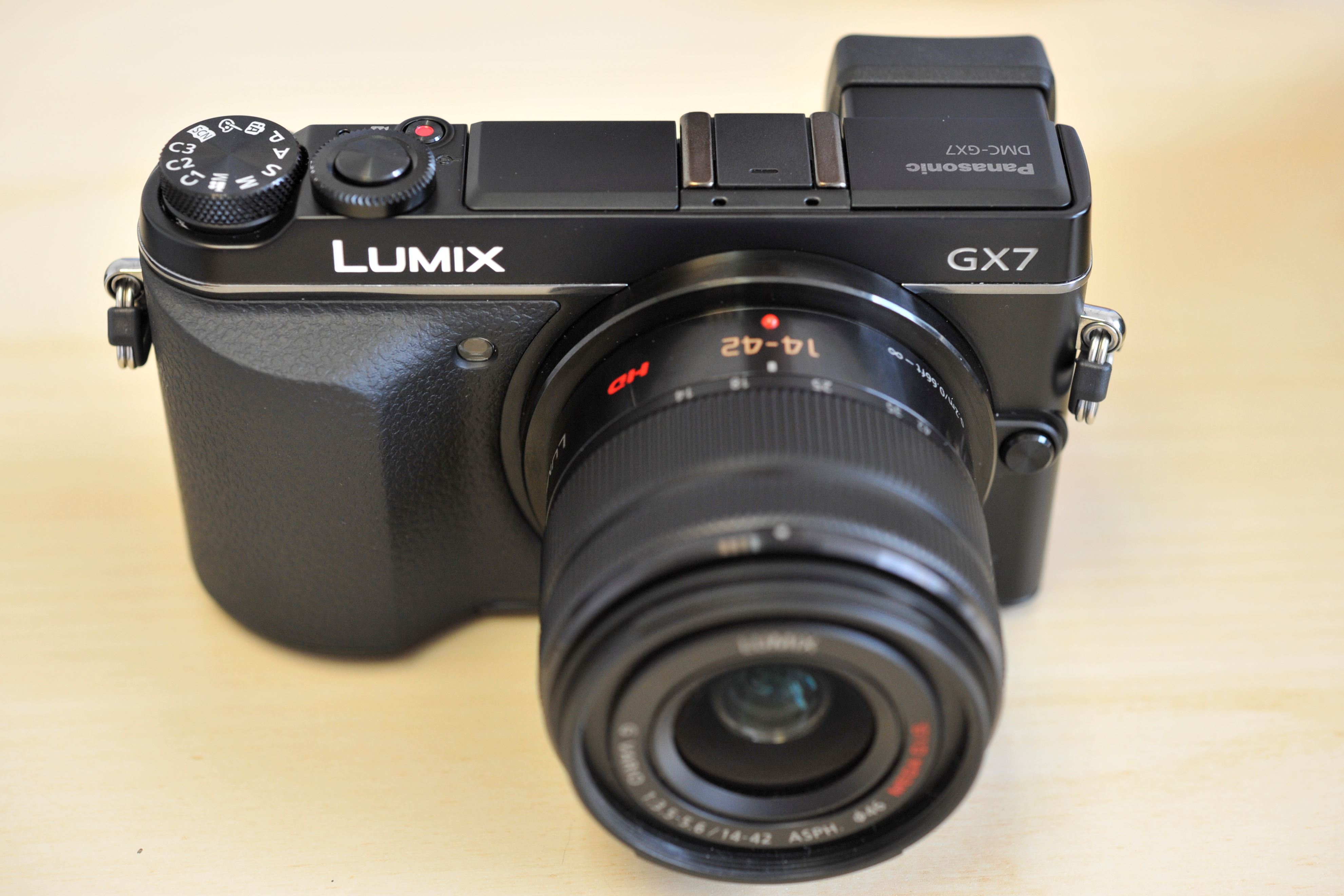 MB: No, there’s no rocker switch on the body.

MG: Is there anything else new about the GX7?

MB: Yes, there’s focus peaking at a magnification up to 10x. This shows a picture-in-picture view, and you have the ability to move the enlarged area around the frame with your finger. You can change the colours within the menu system too, so if you’re focusing on a yellow flower, for example, you can use a different colour to highlight the contrast. It’s something which is very in-demand, and I think it’ll be used a lot. There’s also a Clear Retouch feature, which is more than just a bit of fun. This lets you take elements out of photographs by rubbing them on the screen. The camera then matches that section to the surrounding area, before saving that version alongside the original image. So if you have a bit of a tree sticking in the frame of your landscape, you can get rid of it using this feature.

There are now nine customisable function buttons on the camera, and also a Highlight/Shadow option; this allows you to change the camera’s gamma curve, so you can increase and decrease the gradation of dark and light areas. You can change the curve with the physical controls, although if you’re confident with the camera you can also use your finger to physically drag the curve. There are four preset modes: Bright and Shows, Lower contrast, Standard and Higher contrast, and three customisable modes as well. This feature is thanks to the 25% better low-light performance of the new sensor in low light. 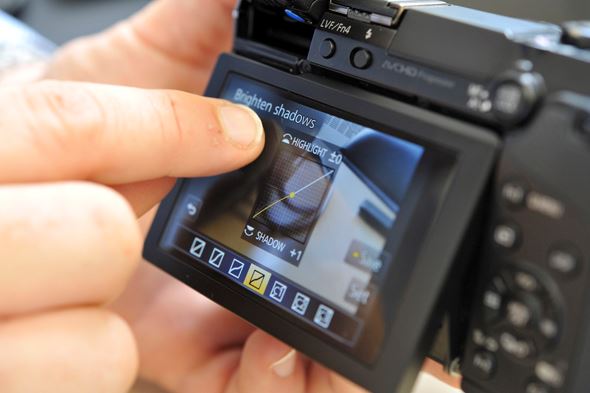