On Location with a Pro Filmmaker

By the Wex team and Photo Professional magazine 9 January 2016

As the world of professional filmmaking becomes more accessible to photographers, we talk to a pro on location with Elbow frontman Guy Garvey 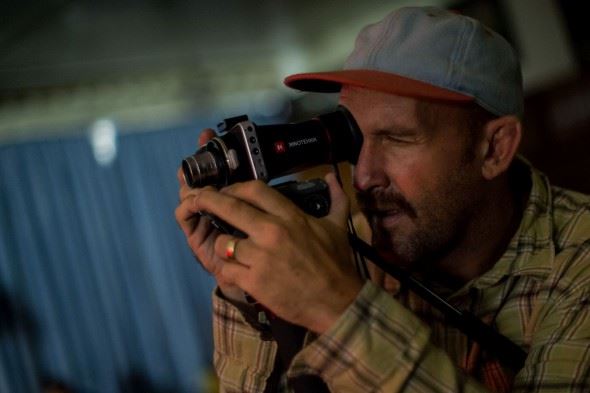 The world of filmmaking changed forever the day that DSLRs became HD enabled, letting photographers peer over the fence and check out a fresh discipline. Some looked and stayed put, while others saw an opportunity and decided to get involved.

Seven years on, the threshold for would-be filmmakers has dropped still further, with the CSC market exploding and serious cinema cameras from the likes of Blackmagic Design now available for well under £1000. More and more photographers are realising that filmmaking needs to be taken seriously.

These days, it’s not just a need to explore new opportunities that’s driving the move across to moving image. Many clients are now demanding both stills and moving footage, and photographers not in a position to oblige will lose out. As streaming becomes ever more a way of life, video will be increasingly important, and those who understand this fact will be ahead of the game.

We wanted to find out more from photographers who started out as photographers but moved successfully into film. With that in mind, we talked to Percy Dean.

With director Mark Thomas, Percy has recently been working with Elbow frontman Guy Garvey, on the video to accompany his new solo single, ‘Angela’s Eyes’. Percy came into the world of filmmaking after a 27-year career in photography and still works in both disciplines, but filming is becoming more dominant and he’s thoroughly enjoying its challenges.

The first film Percy ever shot was a video for the hit single ‘Andalucia’, by Doves.

“When I made that film, I have to confess that I didn’t really know much about such things as white-balance,” he recalls. “I was all over the place, but I got through it and the film turned out really well. I’ve always liked having movement in my films. I started out working with lots of different tripods and I used a dolly as well for a while. I’ve also worked with Ronin and MVI rigs. What I use a lot, however, is a Manfrotto Video monopod fitted with a fluid head. I can tuck it into a rucksack and then I’m ready to go.” 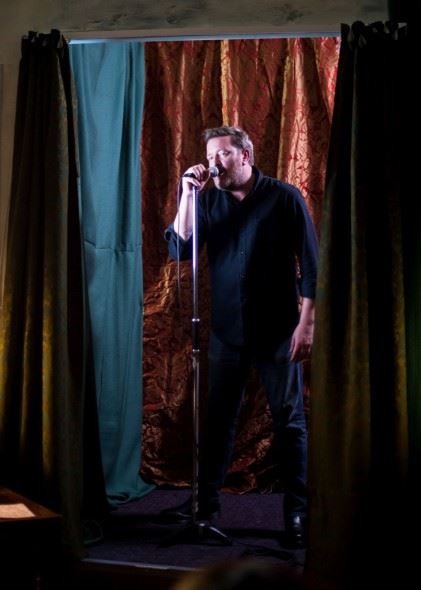 Percy’s ability to work in a flexible way was perfect for the Guy Garvey video, where the idea was to echo the gritty feel of a 1960s strip club. Many of these establishments had a ‘peep show’ feel as the audience watched the performers through a curtain, and the aim was to recreate this to act as a frame for the band.

The team found the perfect venue in Manchester’s Carlton Club, which has remained largely unchanged over the years and is still full of atmosphere. Set designer Joel Rock adapted the space so that it had the right 1960s strip club vibe, then a general invite was put out to friends to come and act as the audience for the filming. 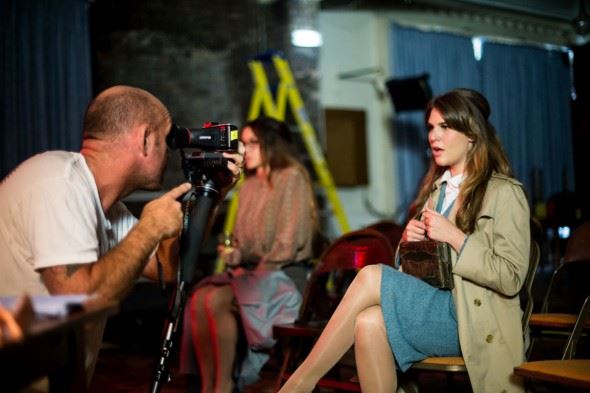 The Blackmagic Pocket Cinema Camera was the perfect tool for this kind of job, and three were used on the shoot. For a start, it’s a true Super 16 digital film camera. It’s also really compact, so it can be used in the studio or on location with ease. Other big plus points are the feature film-style 13 stops of dynamic range, high-quality lossless CinemaDNG Raw and Apple ProRes recording, while the whole package is unbelievably affordable, with a street price of around £700 body only.

“As a photographer, I like having freedom of movement,” says Percy. “I want to be self-contained and my gear needs to be as small as it can possibly be. The Pocket Cinema Camera has been fantastic because it’s just so portable. Although it’s the world’s smallest professional Super 16 digital film camera, the quality of output has not been reduced and it’s still capable of giving you fantastic results. 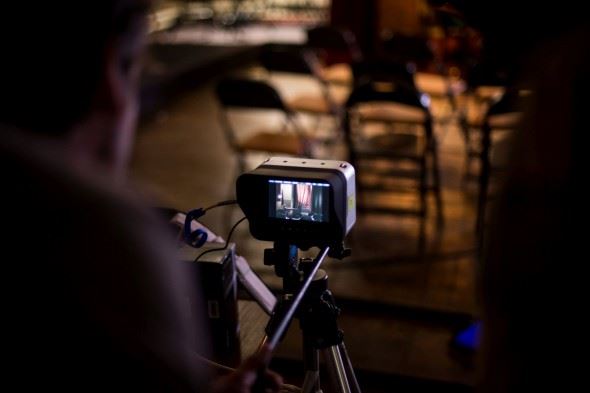 “When I’m working on things like ‘Angela’s Eyes’, it’s important to be able to work without any huge fuss. With the Pocket Cinema Camera there’s no massive set-up to worry about, and it opens a different style of shooting. I can follow what arises and really think about what’s coming through the lens. I don’t have to cart around great big tripods and matte boxes and have someone else carry all my bags for me. I want to be able to react to what I see.”

The fact that it was possible to work, via adapters, with different lenses opened all kinds of possibilities, and director Mark Thomas took full advantage by sourcing vintage optics from Bolex and Bell & Howell to give a delightfully period look. He also ordered up an exotic Krasnogorsk lens from Russia, which only just arrived in time.

“It featured the company’s M42 lens mount,” says Mark, “and there wasn’t a bespoke adapter available that would allow it to work with Micro Four Thirds. It took me five hours to file down parts of the lens so that it would fit. I couldn’t quite get the back focus to work in time for the shoot, but we did use it for some of the macro shots. 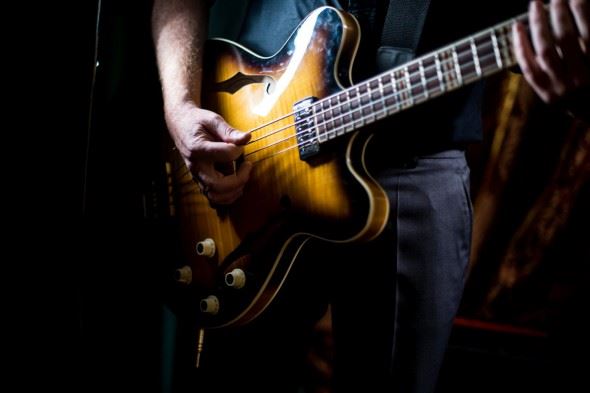 The aim for the Guy Garvey film was to get as live a feel as possible, and Percy worked not just with the Pocket Cinema Camera but with the larger Blackmagic Cinema Camera as well, which features a 2.5K sensor and the choice of professional PL, EF or Micro Four Thirds mounts. “I use the Blackmagic camera a lot,” Percy confirms. “I don’t own a huge amount of gear because it’s expensive. I hire what I need for individual jobs, but the Blackmagic kit is so affordable that it’s not an issue, and I own a lot of lenses as well.”

Lighting for the video needed to fit the feel, so it was subtle but effective. Overall lighting came from an ARRI M18 HMI fixture, which worked well, but there was still a need to throw light on to the band. However, they were in an area the size of a cupboard, behind the curtain, with no room to set up conventional lighting.”

I ended up breaking down a Kino Flo fluorescent light and using the individual tubes inside the box,” says Percy. “This worked really well, and the tubes themselves couldn’t be seen.”

“When you’re making films you learn to be adaptable with lights and use whatever’s at hand – a light bulb, a desktop lamp or whatever. When I started out, I wasn’t up to speed on film lighting and hadn’t realised how different to photographic lighting it can be. When you’re lighting for a still picture, you’re working with a flat plane that isn’t going to move. Once you go into film, everything is moving and you have to think about a much wider area.” 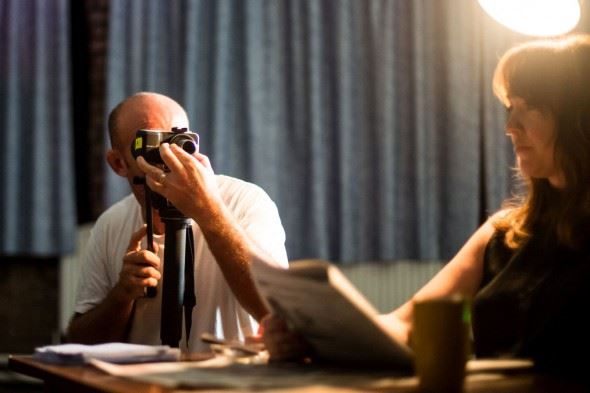 “With the Guy Garvey shoot it wasn’t so difficult, because we were looking to create brutal, club-type lighting, and that was relatively straightforward. On other shoots, where the aim is to mimic daylight and make it look believable, it gets a lot more challenging. “On my first job I worked with a 25K ARRI head that was on full power with no diffusion, and it just went everywhere. At that time I didn’t know about gels and the different ways to soften the light.”

“Now I’ll first try to make the set look good with the film lights switched off. Then I’ll introduce them subtly, diffuse them and flag off areas where I don’t want the light to go. You can’t work with sheets of translucent paper in this kind of situation, because it won’t have any effect. I’ve used unbleached muslin to take some power out of a light, and I might also tape over part of the head. “For me, as a photographer, it was a massive learning curve, and I’m still learning. There is no simple resource for everything you need to know. I’ve got friends in the industry for feedback, but really the only way you learn is through trial and error.”

The ‘Angela’s Eyes’ shoot was completed in a single day, albeit one that ran from 8am to 8pm, but Mark came away knowing he’d got what he came for.

“Just starting the edit, I could see it was all there,” he says. “That’s a good feeling. I know that once it’s fully edited, which takes around a week, we’ll have something that really works and gives Guy exactly what he was looking for.” 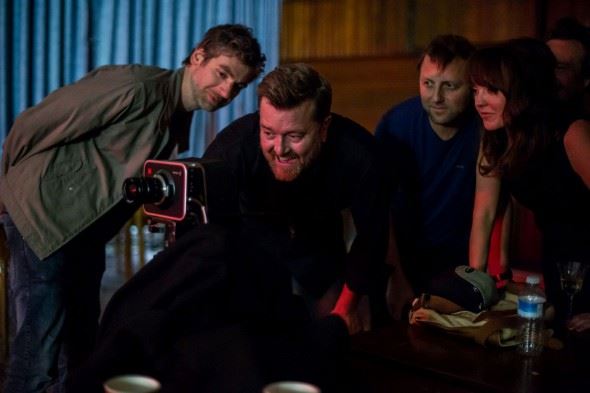 Lighting for all occasions

For the photographer looking to move into filmmaking it’s not necessary to invest in two totally separate lighting kits. Obviously continuous lighting is a prerequisite for film, but we’ve moved on a long way from the days when this would have meant looking at heavy-duty tungsten units that would rapidly heat the studio to boiling point.

With LED lighting now coming of age, and fluorescent tubes also in the mix, there are now plenty of alternatives, and many of the teething problems that beset the new technology – such as low light output and indifferent quality of light – have now been largely overcome.

The best LED light panels will have the capability to not only light a decent-sized film set, but they will also double as lights for the still photographer. They are light to carry, robust (unlike tungsten), cool running and capable of being adjusted to deliver light that’s colour balanced for the space that’s being worked in.

Any drawbacks? They’re still not going to be as powerful as an HMI, and the bigger film sets will remain a stronghold of tungsten in the future. They also don’t have the capability that flash has of being able to freeze movement. However, as a flexible light source that will cover many of the scenarios that photographer/filmmakers might face, they are certainly reaching the point where they are becoming an indispensable tool across the industry.

How to Start Shooting Serious Video