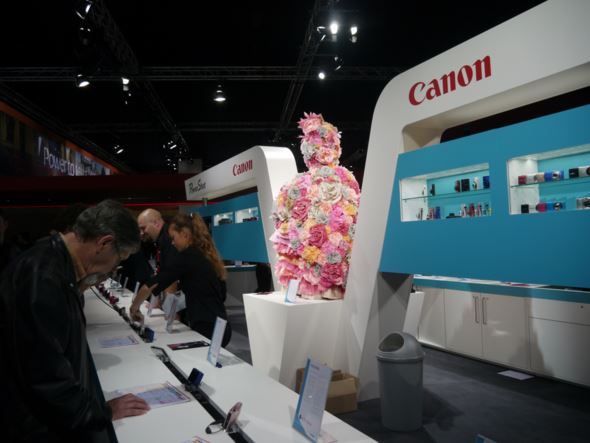 Canon was definitely near the top of my list of stands to visit on my first of two days at Photokina, Europe's biggest Photographic industry trade event. I headed over there this afternoon to spend some time with their new 'entry-level' full frame, the EOS 6D as well as their 3 new compacts, which I was really excited about checking out too: the G15, SX50 & S110. 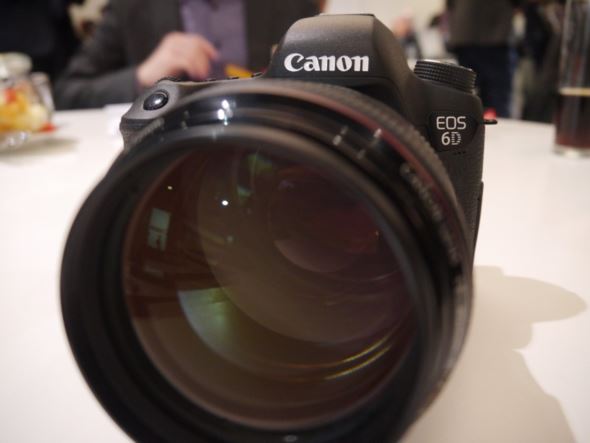 After writing about the launch of Canon latest DSLR on Monday, I was really keen to see the 6D in the flesh. I knew this was pegged to be fairly lightweight for a full-frame camera (approximately 770g with battery in), but it wasn't as physically small as I was expecting it to be, which I think those of you with larger hands will appreciate. It 'feels' like a full-frame DSLR in your hand, and the magnesium alloy front and rear covers add a reassuringly solid feel to it without it being too heavy, which is what will make this camera appealing to many photographers - whether you're shooting events, weddings or landscapes. 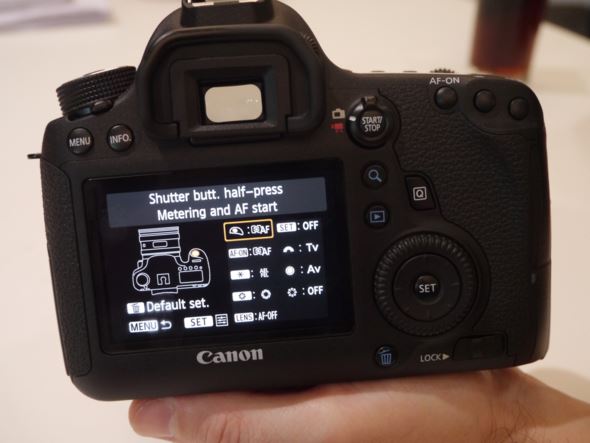 Setting up custom functions on the Canon 6D

Inevitably the 6D will be compared to the 5D MK II, although it's not a direct replacement of this model by any means. If you are a Canon shooter considering a jump into the rewarding world of full-frame shooting, you currently face a choice between these two models so it's only fair to look at them side by side and review where the 6D comes out on top...

One of the recurring criticisms of the 5D MK II was how the AF system could struggle in low light shooting situations. The 6D has an additional 2 AF points (bringing it to 11), but instead of fixating on the number of AF points, I think the key feature here is that the AF system is sensitive down to -3 EV - for the sake of comparison, the 1DX is sensitive down to -2 EV. So, although it may not boast the 61 AF point system of the 5D Mk III, it should operate extremely well in challenging AF situations.

The max expandable ISO of 102,400 is a specification you will see on both the 6D and 5D MK III, as well as the latest DIGIC 5+ image processor, making this 'entry-level' full-frame DSLR a pretty powerful tool. For the videographers among you, I'm told the 6D has almost virtually the same spec as the 5D MK III, with the main difference being the lack of headphone socket on their newer model. 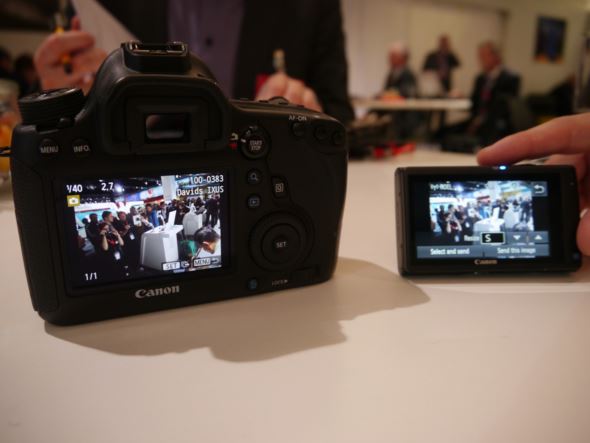 A demo of the Wi-Fi image transfer function from 6D to IXUS compact. Easy!

As mentioned in Monday's post, the 6D is Canon's first EOS model to feature built-in Wi-Fi and GPS connectivity. As the camera isn't expected to be in stock until December, the EOS Remote App (to be available for iOS and Android) will be available closer to the time and I wasn't able to see a full demo of how that will work.

The App will allow you to send images straight from the 6D to other cameras, DNLA devices, smart phones and tablets - I was able to see a demo of the 6D to camera transfer, which worked perfectly in a matter of seconds. Directly from the App you'll also be able to control a range of settings and functions, including: shutter speed, aperture, White Balance, ISO, as well as triggering the 6D remotely, as you'd expect. I'm really looking forward to seeing a full demo of this in person later on in the year. 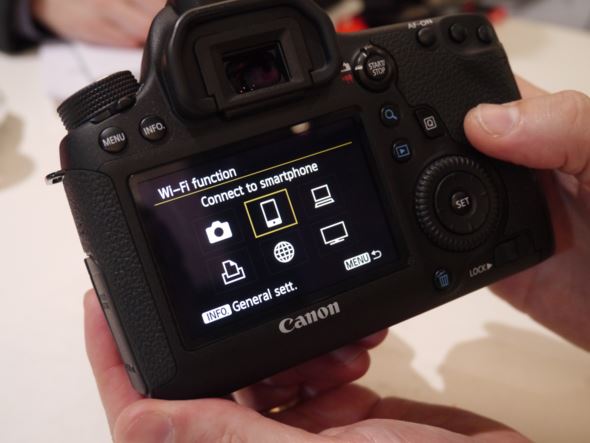 A peek at what the Wi-FI menu looks like

A trio of PowerShots

Luckily, I also had the opportunity to take a look at the new PowerShot G15, SX50 HS & S110 cameras that I wrote about briefly on Monday too. I know many of you will be interested to hear more about this really popular line of compact cameras, so I'll round up the key new features and significant improvements on previous models along with some more photos... 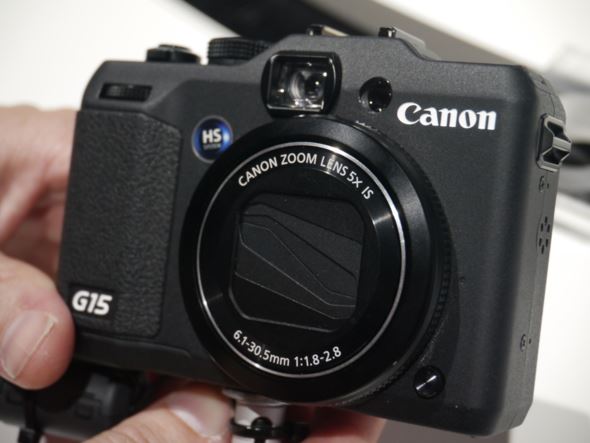 Physically, the G15 has slimmed down a bit when compared to its predecessor, the G12 and current G-series users can expect this latest model to be a more similar size to the G7 and G9 models they may already be familiar with. The ISO dial on the top of the camera has been removed to make way for the pop-up flash, with an ISO button now appearing on the rear of the body, making the rear button layout almost identical to the top-of-the-range G 1X. 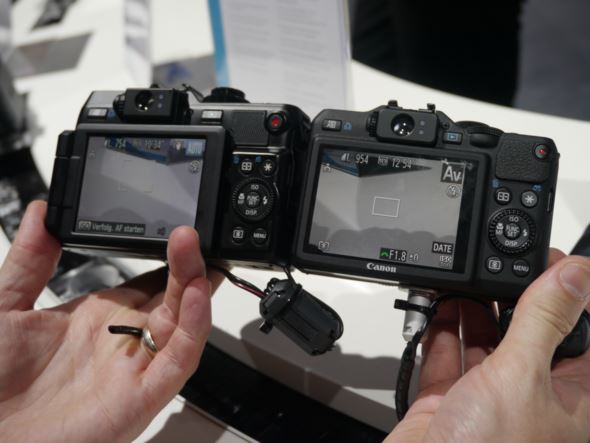 Comparing the size and layout: the G 1X is on the left, the new G15 on the right 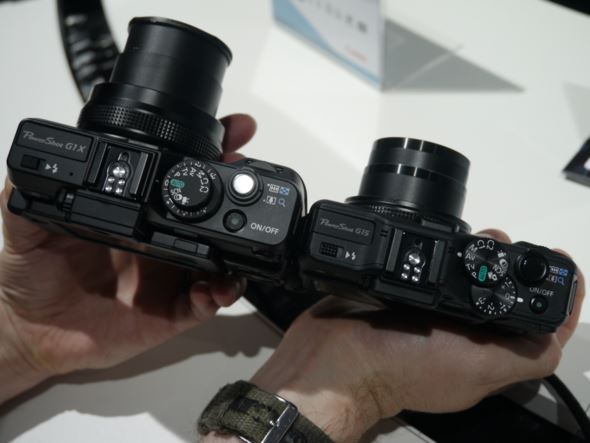 As you can see, the G15 is significantly slimmer than the G 1X

Impressively, the G15 is twice as fast as the G12 when it comes to focus speed and shutter lag, which I think many G-series users will be pretty pleased with, as I know there are a lot of you who love the manual control and image quality these compacts offer as a substitute - now the speed of this camera's operation will work to match what you may be used to with your DSLR. The faster and brighter 1.8-2.8 lens is superb too and another improvement serious photographers will look forward to shooting with. 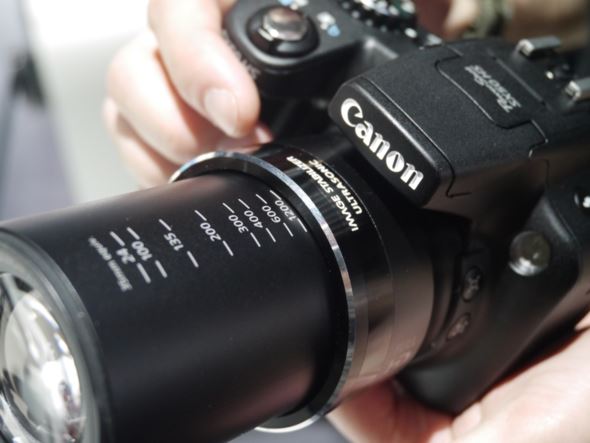 The main improvement on the SX40 in this new SX50 HS model is fairly plain to see but nonetheless, pretty astounding. The latest PowerShot lives up to its 'super-zoom' title with a whopping 50x optical zoom, up from 35x optical zoom on the model it replaces. I saw what the SX40 was capable of during a trip to Kenya earlier this year, and the image quality at maximum zoom was truly excellent for what you'd expect from a compact, so I'm really looking forward to seeing more sample images and real-world results from this promising new model too. 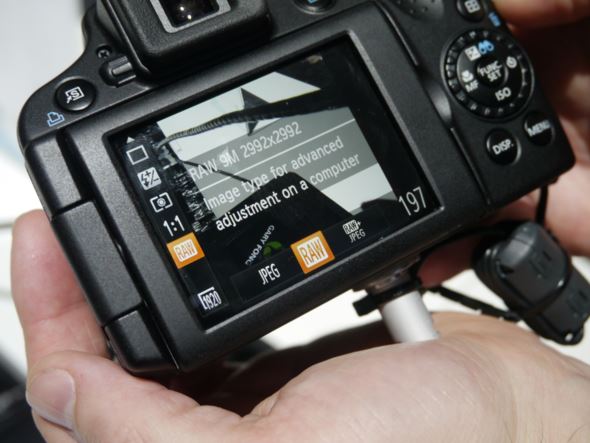 The 12.1 megapixel SX50 HS also sees the inclusion of RAW image shooting, which wasn't an option on earlier SX cameras in this range. It's something that customers have been loud and clear about wanting, so it's great to see Canon listening to that feedback and incorporating it into the latest model. 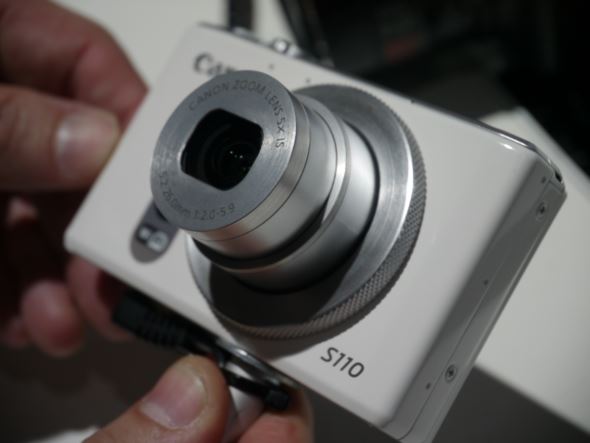 The Canon PowerShot S110, now in White as well as the traditional Black

Last up, I had a look at the new S110, which is the latest in another line of incredibly popular series of Canon compacts - the S-series, thus replacing the S100. The S110 has improved ISO sensitivity and is now capable of shooting up to 12,800 ISO. 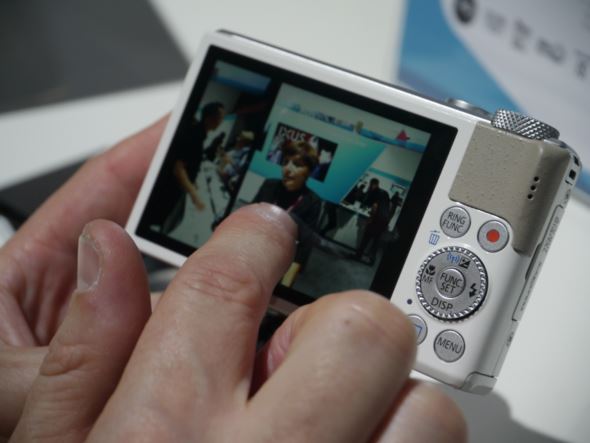 The new touchscreen on the S110

One of the main new features here is the inclusion of Canon's new touchscreen technology, which you can also find on the EOS M compact system camera and EOS 650D DSLR cameras. I had a chance to test this out again and was pleasantly surprised by how reactive and sensitive this technology actually is. I've always thought it would be most useful when it comes to reviewing your images, and playing with the S110 has certainly confirmed that for me - it really is super quick to swipe through the photos stored on a card and the pinch-to-zoom function also works as quickly as it should in order for it to be really useful. 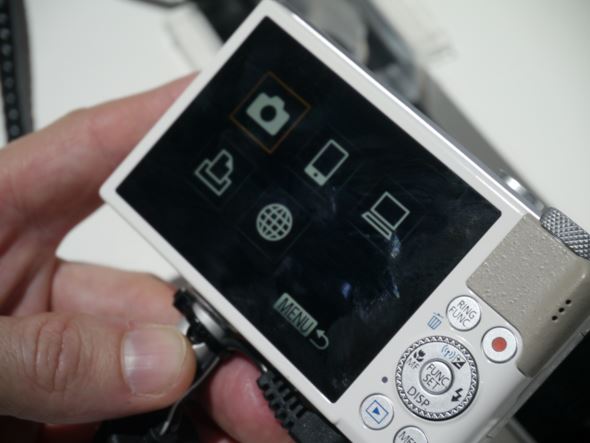 The S110 gets connected too

The second really key new technology included in the S110 model is built-in Wi-Fi & GPS, which I didn't get a demo of today but I would expect it to work fairly similarly to that in the 6D. As you can see from the images, the S110 now comes in White as well as the traditional Black.