The new Canon EOS 1D Mark IV is described by its maker as “a high-speed multimedia performance monster” and it’s clearly aiming for a battle with the Nikon D3s announced 6 days ago. The EOS 1D Mark IV boasts a new 16 megapixel CMOS sensor (APS-H, 1.3x crop) and dual DIGIC 4 processors which can keep up with the flurry of data that 121 JPEGs at 10 frames per second will deliver. 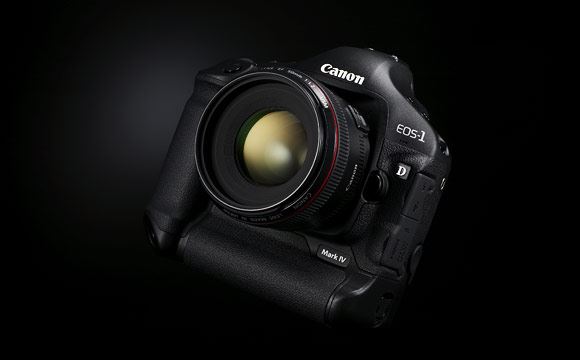 While the resolution jumps and the frame rate is held steady from the EOS 1D Mark III, one area in which the Mark IV displays phenomenal improvement is the ISO range on offer: ISO 100-12,800 as standard, with extended high ISO modes up to 102,400. The EOS 1D Mark III offered a standard 100-3200 ISO range with ISO 6400 boost.

The 1D Mark IV’s maximum ISO of 102,400 matches the Nikon D3s but the key difference is the pixel density challenge that Canon face to produce clean high-ISO images. The Nikon D3s has fewer megapixels and a greater sensor area (full-frame rather than APS-H), resulting in a pixel density of 1.4MP/cm2, whereas the 1D Mark IV has a 3.1MP/cm2 pixel density. Canon has approached the high ISO challenge by improving the sensor design rather than increasing detail-destroying noise reduction post-capture. The new 16 megapixel sensor features Canon’s latest technology to squeeze maximum performance from light reaching the sensor: Gapless microlenses and higher sensitivity photodiodes produce a stronger signal to noise ratio, the end-result is less noise in your images.

The 45-point AF system has been completely redesigned, in a bid to escape the Mark III’s AF gremlins, whilst setting a new benchmark for professional EOS digital SLRs. The AF sensor features 39 cross-type points which are enabled with f2.8 lenses (or faster), specific f4 lenses and f2.8 lens + teleconverter combinations. The EOS 1D Mark III only featured 19 cross-type points and like previous 1-series DSLRs only offered faster AF performance with f4 lenses using the centre point.

To enable the enhanced cross-type point performance with the 1D Mark IV simply attach any f1.2-f2.8 EF lens or the following options:

The Canon 1D Mark IV is capable of capturing full resolution 14-bit RAW images at 10 frames per second, enabled by the dual DIGIC 4 processors which have 6 times the processing power of DIGIC III found in the 1D Mark III. This processing power is also put to good use when the 1D Mark IV is combined with a new UDMA 6 compact flash memory card, such as the SanDisk Extreme Pro range, capturing 121 JPEGs or 28 RAW images at the full 10 FPS.

The 1D Mark IV retains all the features that make it perfect for professional photographers; including 76 rubber seals for reliable water resistance, the 100% viewfinder, tried & tested ergonomic controls, and the 1500 shot battery life with the LP-E4 (at 23°C). Auto Lighting Optimiser (ALO) has been added, a first for a professional EOS camera, which offers automatic contrast & brightness correction, enabling less post-production and a faster workflow. It’s getting competitive out there – the time from capture to publish is dropping all the time – and Canon hope this will give 1D Mark IV owners an edge.