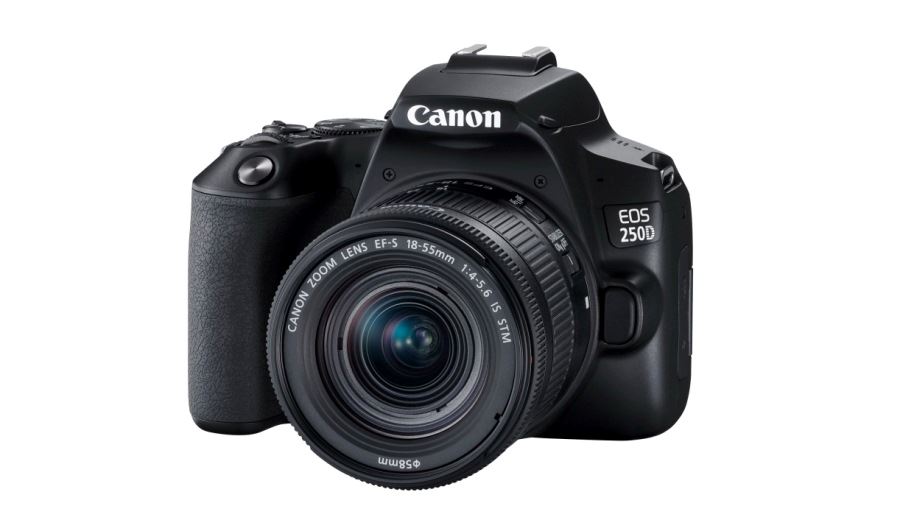 TL:DR: Don’t have time to read up on all the 250D’s specs? Click here for a quick summary.

We’ve been bombarded with a flurry of high-end and mid-range mirrorless cameras since the third quarter of 2018 – this included Canon’s very own full-frame mirrorless duo, the flagship EOS R and its smaller sibling the EOS RP. So, to hear that Canon has announced an entry-level DSLR is a somewhat surprising, but certainly welcome, change of pace.

The camera in question is the successor to 2017’s 200D (or Rebel SL2) and is dubbed the EOS 250D (or Rebel SL3). It continues the former’s claim (upon its release) to be the world’s lightest DSLR with a vari-angle screen. And indeed, with a battery and SD card, it weighs a meagre 449g (for some reason the white variant weighs 451g). In camera terms, that’s lighter than Canon’s entry-level 2000D, Nikon’s D5300 and a hair lighter than its predecessor. The Internet also tells us it’s almost twice the weight of a hamster…

The 250D boasts Canon’s celebrated Dual Pixel CMOS AF, for snappy focusing in live view. Depending on the lens you’re using, it features an AF area of approximately 100% vertical x 88% horizontal. With a maximum of 3,975 AF points, Eye Detection, Face Detection and Tracking AF, users should have no problem shooting a wide range of subjects. The camera is capable of shooting bursts of up to 5fps, and as you’d expect from a camera released in 2019, the 250D has both Wi-Fi and Bluetooth Low Energy.

Canon’s diddy DSLR is available in black, silver and white, and is exactly the same size as its predecessor: 122.4 x 92.6 x 69.8mm. It features a viewfinder with approximately 95% coverage (0.87x magnification), built-in flash and hotshoe, should you wish to further your flash photography endeavours or attach a microphone.

If you’re looking to purchase an entry-level DSLR, the 250D’s vari-angle screen might just be enough to sway your decision. The 3-inch, 1,040K rear-LCD screen provides 100% coverage and will certainly appeal to anyone who plans to capture video footage, take selfies or shoot stills from extreme angles.

Video is perhaps the most obvious update. The 250D is capable of shooting 4K UHD footage at 25fps, and also includes 4K time-lapse and 4K Frame Grab modes. It’s certainly nice to see an entry-level Canon DSLR that’s able to shoot 4K. Throw in that vari-angle screen, the ability to shoot full HD at 50fps and a microphone port (3.5mm), and you have a capable vlogging camera at the very least.

Who’s it for? The EOS 250D is suited to anyone looking for an interchangeable-lens camera on a budget. It’s also an ideal first camera and is an enticing prospect for compact users who want to steer clear of anything too bulky, but want to take full control of their settings.

Why should you care? The EOS 250D is proof that DSLRs don’t have to be big and bulky. Plus, an interchangeable-lens camera opens up a plethora of creative possibilities.

What do we think? If you’re looking for a budget DSLR, Canon’s EOS 250D boasts the latest DIGIC processor, the ability to shoot 4K footage and a featherweight body. What’s more, you’ve access to Canon’s rich catalogue of EF and EF-S lenses.