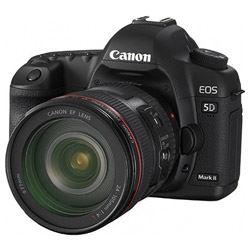 I have a theory: All digital SLRs are created by internet gossip reaching critical mass and *boom* suddenly a new camera materialises in a marketing department. Crazy theories aside, it’s more likely that Canon have been covertly labouring over the new EOS 5D Mark II for a while… lets have a look.

The headline improvement is a whopping jump in resolution from 12.8 to 21.1 megapixels. Although this upgrade will undoubtedly satisfy detail junkies, it’s also going to make some people shudder at the thought of having to upgrade their computer again, just to process the huge RAW files at a faster rate than 1 per week.

Canon has provided two sample images from the 5D Mark II at ISO 100. The images look clean whilst capturing a great tonal range:

The resolution of the Canon EOS 5D Mark II certainly doesn’t resign it exclusively to the studio – 3.9 frames per second, resistance to 10mm of rain for 3 minutes, and ISO expansion up to 25,600 are ideal for action and tough environments.

Just in case the Canon 5D Mark II doesn’t stack up as a talented camera in your books, then consider 1080p HD movie recording! The 5D Mark II allows you to record 12 minutes of high definition video at 30 frames per second (a staggering scary 38.6 Mbits/second). Yes, you will need a collection of very large UDMA compact flash cards.

If you happen to be perched on top of a mountain, miles away from home, you can review what’s passed your viewfinder with a large 3.0” LCD screen. The real gem is the resolution: 920,000 pixels. This high resolution screen debuted with the Canon EOS 50D and represents a significant step up from earlier LCD screens at 230k, found on models all the way up to the flagship EOS 1Ds Mark III.

Nestled within the magnesium alloy body is the technology that often remains un-noticed, working flawlessly so you can get on with the photography. The sensor is kept clean by a vibrating low-pass filter which shakes dust off. Milliseconds after you release the shutter the DiG!C IV chip processes the image according to all the selected parameters & picture styles. Should the desire for action strike then the large image buffer and fast writing speeds allow the Canon 5D Mark II to capture 13 successive RAW images or 78 JPEG images (300+ JPEGs using a UDMA card!).

Canon have billed the EOS 5D Mark II as ‘destined evolution’. Do you think this camera deserves such a bold statement?