A few weeks ago I attended Canon UK HQ for the launch of the EOS 60D and was one of the first people in the country to get a hands on play with canon's new camera. Today, Wex Photographic received stock of the new digital SLR from Canon - enough to fulfill our back-orders for the camera, stock up our warehouse and showroom, and let the sales staff in the Wex Photographic contact centre get their hands on a 60D for the first time.

These are the ladies and gents that you will speak to if you ever call or email Wex Photographic, so their opinion of Canon's latest SLR offering is well worth noting, and the ability to actually, hold and use the 60D dramatically improves their ability to offer advice on it. As such, before this particular unit was handed back to our Norwich showroom for use as a demo model, it was passed around the Wex Photographic offices to see what our people thought of it.

After everybody (well, the important people anyway) had been allowed to try out the Canon EOS 60D they were asked for their thoughts on it - both good and bad. At Wex Photographic we aim to be as objective as possible and the views you are about to read are genuine thoughts expressed by our staff. They're not right, and they're not wrong - they are just opinions, and the thing about opinions is that everybody has one and most of them are different.

"The tilting screen will be ideal for videographers who won't hold the camera at eye-level."

"It feels more solid than I expected it to."

"I don't tend to have a problem accidentally knocking the control dial, but I can imagine many people do and the dial lock will be a real advantage for them."

"The buttons feel a bit cheap and plasticy in comparison with the 50D."

"The in camera RAW processing means you don't have to choose between RAW and jpeg when shooting."

"It feels quite heavy, but I'm used to using a compact."

"There doesn't feel like quite enough camera for the money."

"I really like that grip. It makes it easy to hold in one hand."

"It's the first thing you notice when you pick it up. It still seems strange to see a fold out screen on an SLR. Some poeple will see it as just another thing to go wrong."

"I'm one of the few people who likes an SLR with full HD video!"

"It takes a great picture of my tree! Love it!"

As said, the Canon EOS 60D is now available for sale on the Wex Photographic website and in our Norwich showroom. Some have already been sent out to customers and I've no doubt will sell a whole load more over the coming weeks.

As always, we'll be interested to hear the thoughts and findings of photographers who have bought one and those who have had the opportunity to use one, so please don't be shy with your opinions! Instead, send us an email, tweet us or comment on this post. I'm sure I won't be the only one keen to see what you have to say. 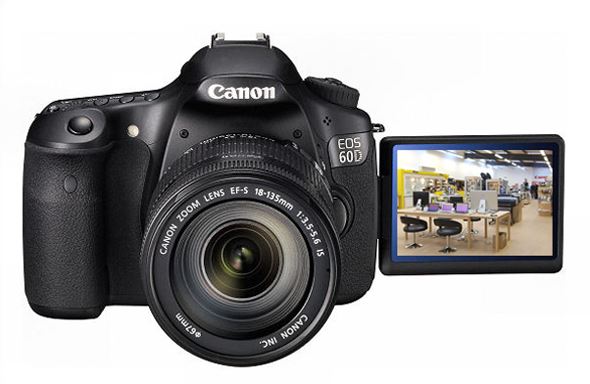