The brand-new Canon PowerShot G11 digital camera has just been announced, playing the lead role in a dramatic refresh of the IXUS and PowerShot line-up. The PowerShot G11 sticks firmly to its G-series roots; a truly formidable compact digital camera for the discerning photographer – pro or enthusiast. Take a look at the new G11’s specifications and a brief PowerShot G10 vs G11 comparison...

Many pre-launch rumours touted the Canon PowerShot G11 to have a CMOS sensor (like the SX1 IS) and the ability to record high definition video. Neither of these rumoured features has materialised, instead the G11 focuses on becoming an even better tool for photographers with the vari-angle screen and improved high ISO performance.

The vari-angle screen returns after skipping a couple of generations (last seen on the G6), which is welcome news for challenging low-angle & above-head compositions. The Canon PowerShot G11 retains an optical viewfinder, but it’ll be hard to resist being permanently glued to the vari-angle LCD screen thanks to the detailed 461k pixel resolution. The G11’s screen resolution is impressive when compared to the 230k pixel vari-angle screens found on digital SLRs such as the Nikon D5000 and Sony A380. 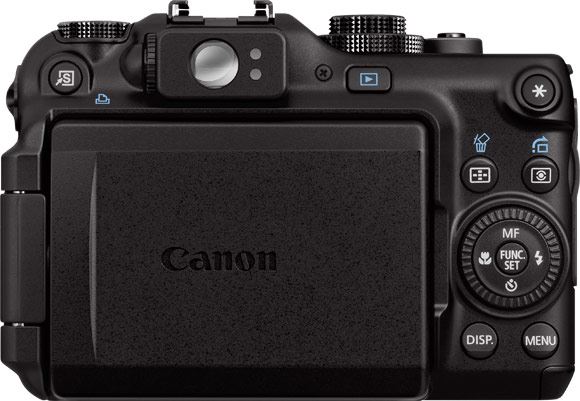 Canon dubs the high sensitivity 10 megapixel sensor and enhanced DIGIC 4 algorithm as a new ‘Dual Anti-Noise System’. While the system doesn’t have a snappy name, the accompanying claim of up to two stops improvement in noise performance versus the G10 is fantastic news.

The unpredictable nature of news photojournalism requires our photographers to get shots in all kinds of situations, and the size of the G10 allows them to do that without drawing too much attention to themselves. The low-light capabilities of the new G11 will be of even greater help in that respect, as it will allow our photographers to shoot high quality images without flash in even more situations. - Stephen Munday, Getty Images

The new PowerShot G11 even allows you to capture 2.5mp images at ISO 12,800. The images won’t be optimal quality, but compared to missing an opportunity in pitch-black conditions it’s preferable!

You could be forgiven for blinking at our PowerShot G10 vs G11 comparison table and deciding nothing major has changed – just the megapixel count and LCD screen. The PowerShot G10 is a great camera, so a lack of seismic changes could be labelled no bad thing, but that doesn’t add incentive to buy or upgrade to a G11. Digging into the detail there are several upgrade-worthy improvements:

Further G11 improvements over the G10 include a higher 1/2000th flash synchronisation speed and an HDMI port for reviewing images on TV. The flash sync is impressive, especially when you consider the PowerShot G11 is fully compatible with the 270EX, 430EX II and 580EX II Speedlites plus ST-E2 Speedlite transmitter. Even the MT-24EX macro twin-lite and MR-14EX macro ring-lite can be used in complete harmony with the PowerShot G11!

All in all the PowerShot G11 looks set to be a real winner; the high ISO performance, vari-angle screen and flash prowess are attractive refinements. Add these refinements to the exisiting G-series formula with excellent manual controls and you’re away!