DJI takes on GoPro by announcing its first ever action camera, the Osmo Action 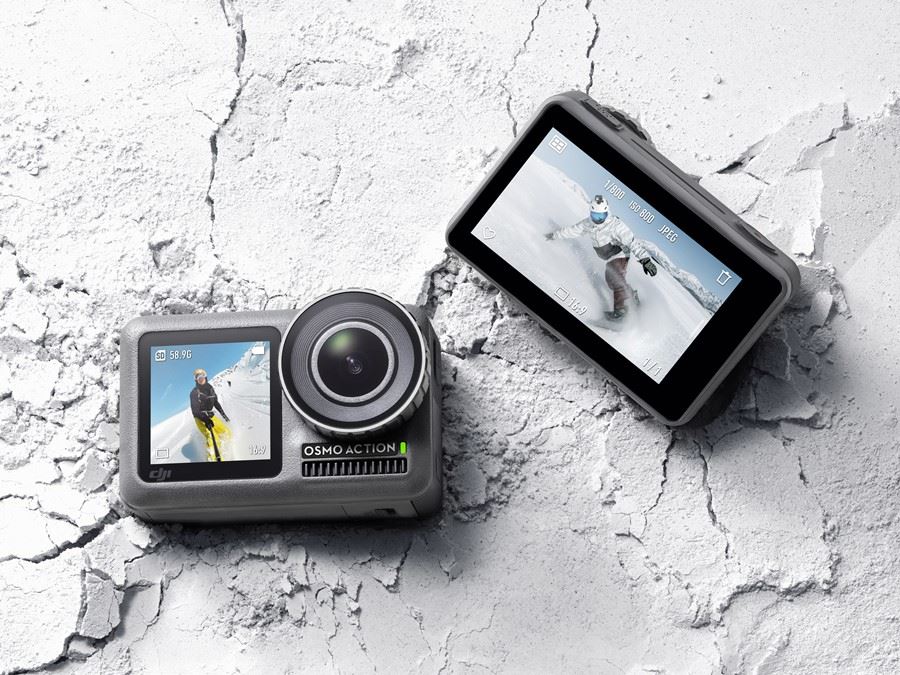 TL;DR: Don’t have time to read the article in full? Click here for a quick summary.

Core specs at a glance…

DJI looks set to build on the success of 2018’s Osmo Pocket, with the announcement of its first ever action camera: the Osmo Action. The price point and size of the Osmo Pocket meant many reviewers compared the tiny all-in-one camera/gimbal system with GoPro’s HERO7 action camera. But really, they’re two very different systems – you’d likely use one over the other depending on the project.

However, it now seems DJI has upped the ante by directly challenging GoPro in its own playing field. Here’s everything you need to know about the DJI Osmo Action… 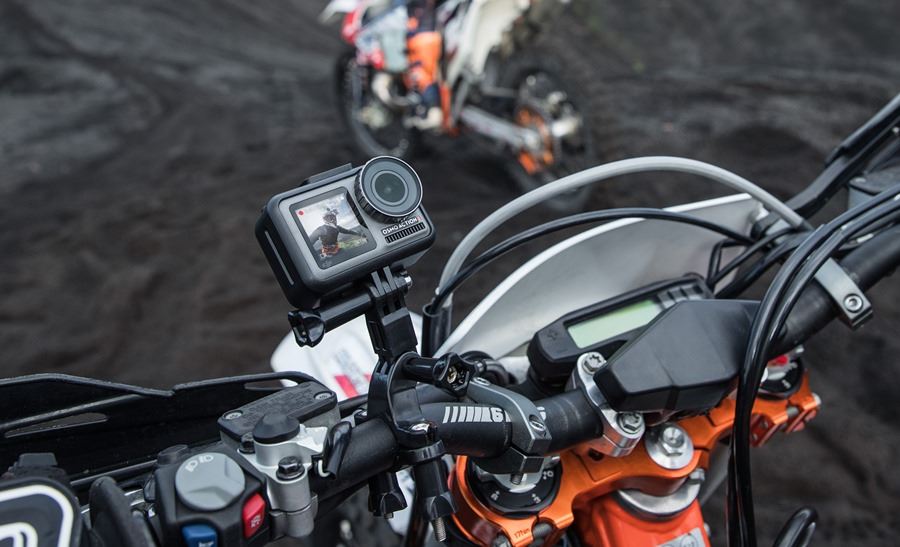 At first glance, the DJI Osmo Action looks incredibly similar to the GoPro HERO7 Black. But that shouldn’t come as too much of a surprise, since most action cameras tend to have a similar form factor. One of the most notable differences is that the Osmo Action has a fully functioning screen on its front, which can display the camera’s live view. This is a huge boon for vloggers as it’s going to make framing yourself while vlogging a doddle. In comparison, the GoPro HERO7 Black has a basic front-facing screen, which only shows some of the camera’s settings.

The Osmo Action has a fixed f/2.8 lens, with a 145-degree field of view. The lens is made up of three spherical optics that, when combined, are claimed to provide “crystal-clear” images in direct sunlight, with reduced glare and distortion. The front of the lens also has a protective coating that’s designed to repel unwanted substances such as dirt, water and oil (all things you’re particularly likely to experience when filming action sports).

As you’d expect, the body is waterproof down to 11m without any additional housing – just beating the HERO7 Black’s 10m – and is claimed to work in temperatures as cold as -10℃. The Action’s battery is removable and according to DJI: “A fully charged battery can support video recording at 1080P/30fps for up to 135 minutes (with RockSteady turned off), and 4K/60fps for up to 63 minutes (with RockSteady turned on).” As for storage, the Osmo Action takes microSD cards.

Something that will appeal to existing GoPro users is that the Osmo Action’s mount is compatible with the same mounting system that GoPro has long adopted – it looks pretty much identical – so a plethora of accessories are already available! 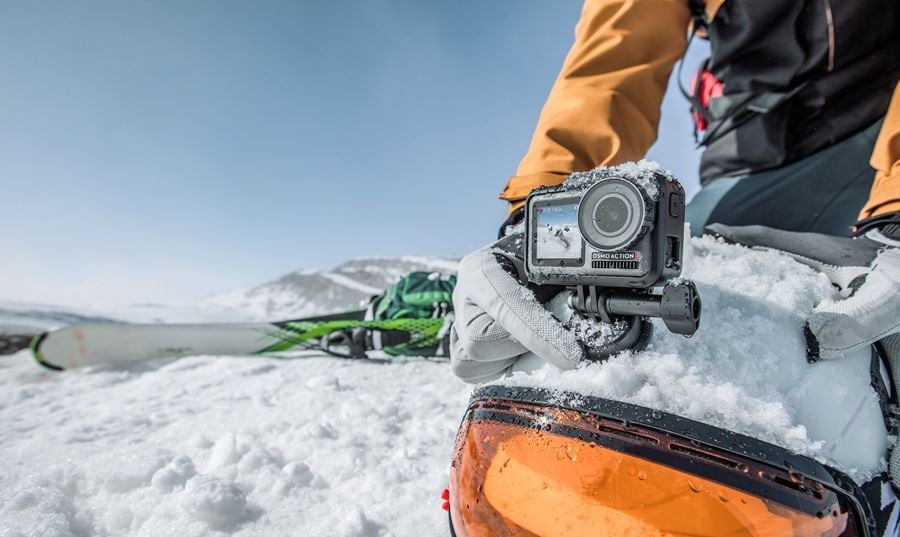 The Osmo Action’s packs the same sensor as the Osmo Pocket, a Sony 1/2.3-inch 12MP chip that’s similar in spec to the sensor found in HERO7 Black. Just like GoPro’s flagship offering, the OSMO Action can record 4K video at up to 60fps and if you drop the resolution down to 1080p, you can achieve an 8x slow-motion effect while shooting at 240fps.

Where the Osmo Action really excels – and where most action cameras tend to struggle – is the available bitrate to record said resolutions and framerates. The Action boasts up to 100Mbps to encode those images, which is nearly a 30% increase on what the HERO7 Black can do. It should lead to some very noticeable improvements to the perceived image quality.

The Osmo Action’s shutter also features some impressive specs. It’s able to operate as quickly as 1/8000sec to capture those high-speed moments of action, or can be left open for up to 120 seconds, perfect for capturing long exposures of the night sky. The device can shoot RAW images and features 4:3 and 16:9 photo modes. Other stills features include the ability to use 1, 3 and 10-second time delays, custom white balance and burst shooting. 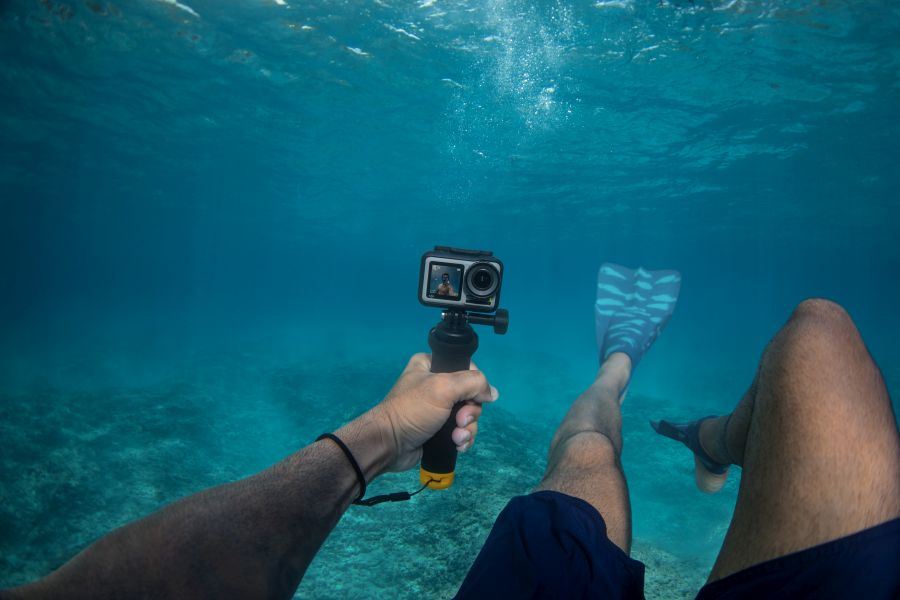 DJI has always provided solutions for creating smooth dynamic shots, whether it’s the compact all-in-one camera gimbal systems found on its drones or the likes of the heavy-duty Ronin 2 gimbal. With that in mind, it’s not surprising the Osmo Action has some form of built-in camera stabilisation – and it needed to considering how well the HERO7’s stabilisation has been received. DJI calls its stabilisation technology RockSteady. Similar to what GoPro has done, it uses electronic image stabilisation and is not mechanical. We’ll tell you just how effective it is in our upcoming review.

The large rear screen is touch sensitive and the Osmo Action is also able to respond to five voice commands, allowing you to film, capture photos, power down and more. The device is compatible with DJI’s Mimo app, so you’ll be able to edit and share your content on social media, while on the fly.

Speaking of shooting on the fly, the action camera has two built-in microphones and although it doesn’t contain a 3.5mm mic input, DJI tells us: “You can connect Osmo Action with a third-party microphone through the USB-C port by the 3.5mm adapter.”

Who’s it for? Anyone looking for a waterproof 4K action camera, which boasts image stabilisation and a host of stills features. Vloggers will certainly make use of its front-facing screen.

What does it compare to? The HERO7 Black, GoPro’s flagship action camera.

Why should you care? The DJI Osmo Pocket was a resounding success and the Osmo Action looks set to deliver another affordable device with broad appeal. The specification looks impressive, but it’s the RockSteady stabilisation we’re eager to see in action, and with DJI’s pedigree for silky smooth footage, we’re expecting good things!