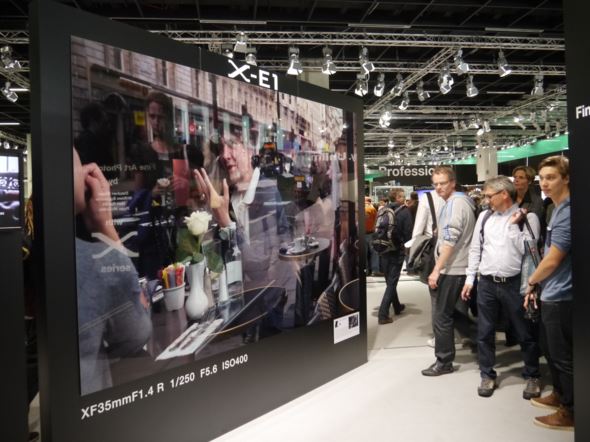 Visiting the Fuji stand at Photokina was a real treat, with lots of visually interesting displays of their cameras against smart black backgrounds. I loved the way Fuji really showed off what their X-series of cameras are capable of, by displaying the work of several photographers in a range of formats (the largest shown above). What I was really looking forward to though, was the chance to learn more about and take some photos with their two new cameras: the X-E1 compact system camera and XF1 compact...and they didn't disappoint! 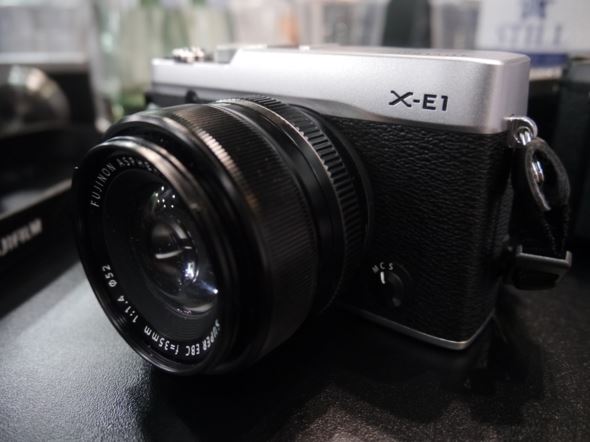 Fuji's latest interchangeable lens model has been pegged as a mini X-Pro1, which makes the X-E1 really interesting product with a body only launch RRP of £749, making it nearly £500 cheaper than it's older sibling, especially considering how similar they really are. Let's compare the two in terms of specs:

The Fuji X-E1 is equipped with the same powerful 16MP X-Trans CMOS sensor and EXR Pro image processor as the X-Pro1 and also boasts the ability to shoot up to 6 fps and 1080p full HD videos - all in a body that's approximately 30% smaller in size than the X-Pro1 (it's a similar size to the X100).

The Fuji X-E1 capturing the XF1 in its frame

The XE-1 is built with a magnesium alloy frame, giving it a nice sturdy feel in your hand. The key difference between this model and the X-Pro1 is that the X-E1 is equipped with an OLED electronic viewfinder (EVF), whereas the X-Pro1 has both electronic and optical viewfinders. If you haven't tested out a camera with an EVF yet, you may be surprised by how good they really are - and the viewfinder on the X-E1 is right up there with the best of them. It has a near-instant reaction when you move your eye on to the viewfinder, and once you're there you get a clear, crisp and bright view of the scene before you. EVF seems to be the way of the future in this quickly maturing CSC market and I, for one, am pretty excited about cameras like the X-E1, which offer photographers so much. I could definitely see this camera in my kit bag. 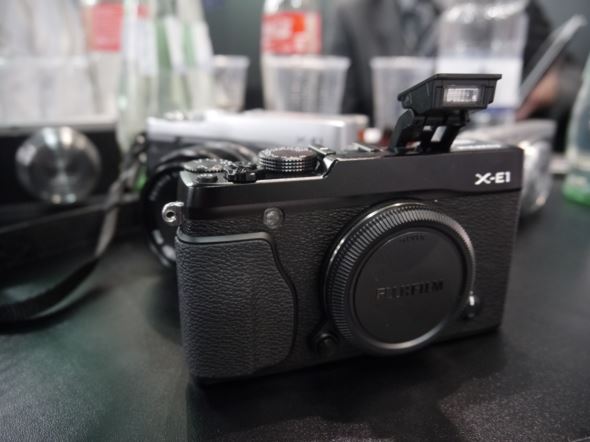 The X-E1 sports a nifty pop-up flash too

I know some of you will be wondering about the autofocus on this camera, and I think Fuji have learned a lot after their hiccups with the pre-firmware update X100 AF issues. The X-E1 is fast and sharp - the official line is that it has a focus speed of 0.1 seconds. I didn't experience that level of speed, but I was testing it in a dim room and I doubt that would have been the shooting environment for the 0.1 second test. It was still undoubtedly quick though, no complaints here at all.

Lastly, the X-E1 comes with a built in pop-up flash for convenience. There's a Macro mode button on the rear of the camera which worked well when I tested it, it managed to focus easily on the XF1 compact at closer range. This camera also has a range of creative shooting opportunities, including the popular film simulation modes you find in the rest of the X-series range of cameras. 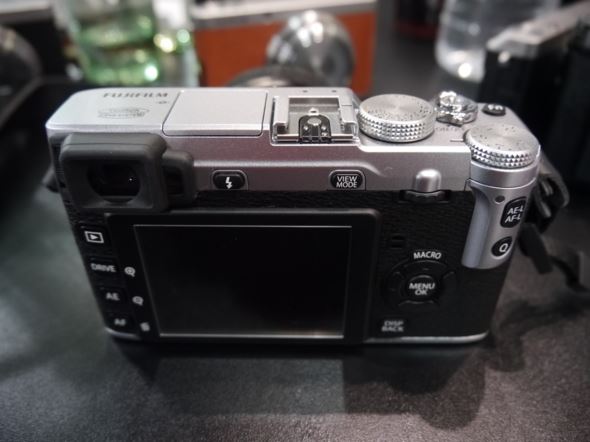 The back of the Fuji X-E1

Fuji have also added a new compact camera to the X-series range, which boasts image quality on par with their X10 model. It has a bold retro style, with an aluminium top and bottom frame complemented by a leather finish available in both black and tan. Fuji had a really neat display at their stand showing the XF1 in 17 different colour leather finishes, these aren't available at present and I understand it was more a display to show what could be possible with it. They were tallying up the votes of anyone willing to share which colour was their favourite, so who knows? Maybe we'll see some limited edition colours of the XF1 in the future if there were some outstandingly popular choices there. You can see a photo of their display over on our Facebook page - pop over and let me know which is your favourite colour, I'd be curious to know what you think! 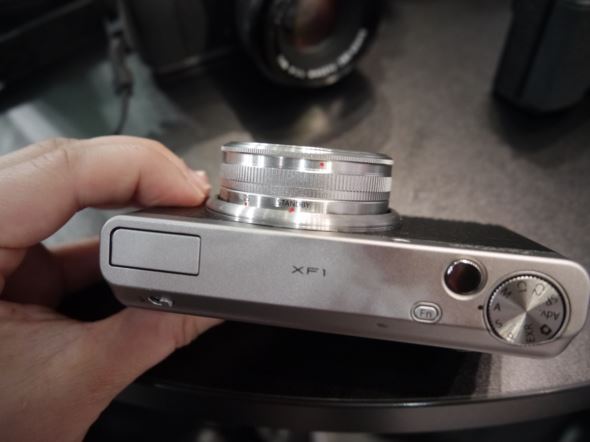 Figuring out the XF1's on/off mechanism built into the lens

A really interesting design feature of the XF1 is the mechanism on the lens, which has a great medium range focal length of 25-100mm and a nice bright f/1.8-4.9 maximum aperture. Once I'd figured out the push and twist action to turn the lens on, it was quite quick to do and just a matter of getting used to it. By the time I'd handed the camera back to Fuji it was a breeze to switch between the closed "off" position, into standby mode and then manually controlling the focal length. It's a really nice feature, even if manually zoom-ing is hardly a new idea in the world of photography. I really appreciate how they've incorporated this hands-on mechanism into a compact, fixed lens camera though, where more often that not on/off and zoom functions are entirely automated by depressing a button. It's a great example of what I think this resurgence of "retro" design is really all about, when done well - recapturing a time where we were more engaged with the operation and feel of a camera and becoming more engaged with the process of making photos, which is definitely a good thing in my view. 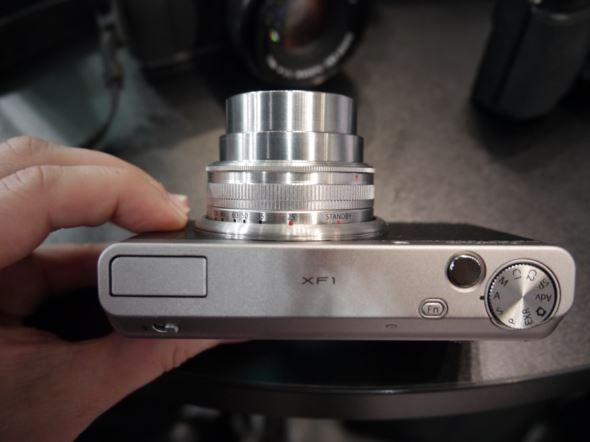 These two new cameras from Fuji were another highlight of Photokina 2012 for me and they'll both be on my list of new releases to spend more time shooting with as soon as possible.