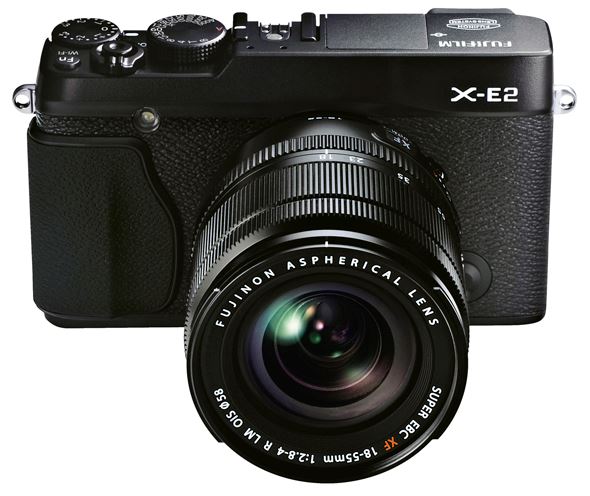 Fujifilm has added a new CSC to its acclaimed X range of cameras in the shape of the Fuji X-E2.

The Fuji X-E2 follows the Fuji X-M1 announced in June and the Fuji X-A1 launched earlier in the month. The X-E2 is, however, positioned above these, just underneath the flagship Fuji X-Pro1.

Although the Fuji X-E2 closely resembles the existing X-E1, Fujifilm is said to have made a number of significant improvements on the inside. The camera now uses, for example, the same 16.3MP X-Trans II CMOS sensor which features in the Fuji X100s compact camera. APS-C in size, this employs a random colour filter arrangement in order to minimise moiré, thus eliminating the need for an anti-aliasing filter. 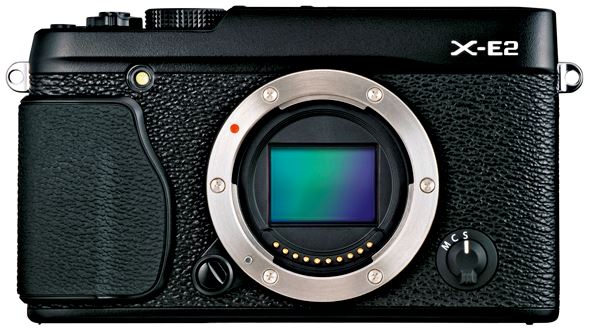 This sensor boasts over 100,000 pixels which are employed for phase-detect AF, and this is joined by a contrast-detect AF system to create a Hybrid AF system. Fujifilm claims this helps it to achieve better accuracy in low light and against low-contrast subjects. With the XF 14mm f/2.8 R lens in place and its High Performance mode enabled, Fujifilm even goes so far as to claim that the X-E2 has the world's fastest autofocus speeds when compared with other cameras with Four Thirds sensors or larger.

The EXR Processor II is said to have doubled processing speeds over the EXR Processor found in the X-E1, with 'virtually' no shutter lag and a 7fps burst rate sustained in the JPEG format for up to 28 images. It also includes Fujifilm's Lens Modulation Optimiser, designed to minimise the effects of diffraction and other optical issues. 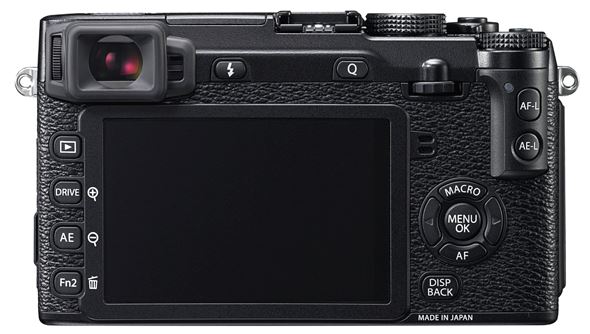 Around the back, Fujifilm has equipped the X-E2 with a 3in LCD screen, which resolves details with 1.04million dots; this is a significant upgrade over the X-E1's screen, which measures 2.8 inches and has a 460k-dot resolution. The 2.36million OLED electronic viewfinder has also been upgraded, with its 50fps refresh rate said to improve visibility over the X-E1's. 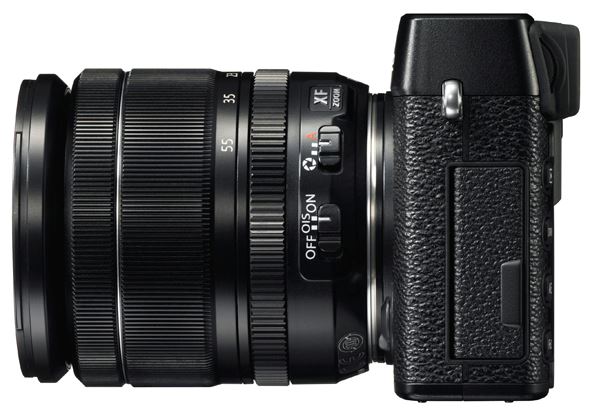 The Fuji X-E2 also shoots full HD video at 60fps and boasts Wi-Fi for instant image sharing. Fujifilm also claims to have improved focusing performance during video recording to enable the camera to track a moving subject as it moves towards and away from the camera.

Other features of note include a built-in flash, as well as a hotshoe beside it for external flash units. Fujifilm's Film Simulation modes, which include Astia, Provia and Velvia, also feature, as do eight filter effects for instant creative treatments. 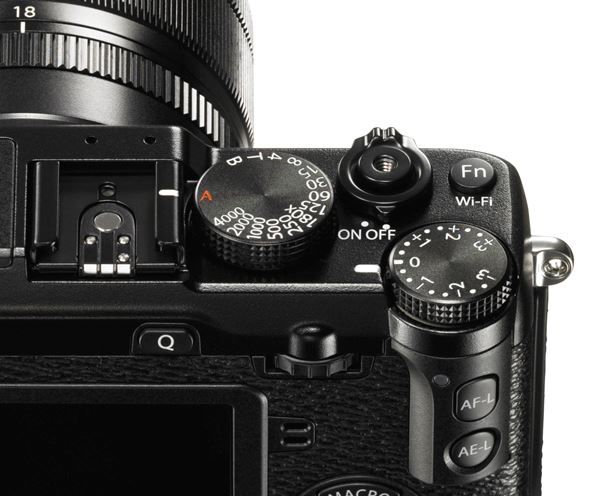 The Fuji X-E2 will be available to pre-order later today. 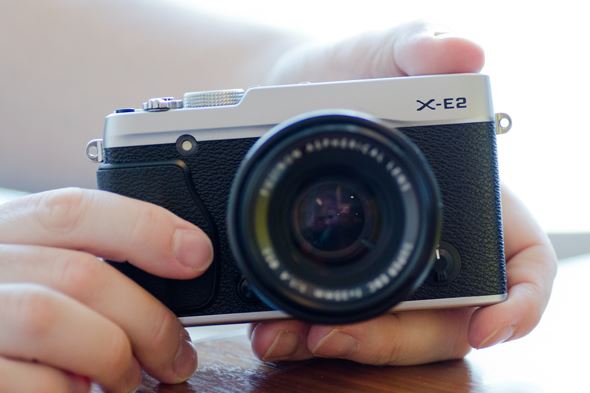 Looking at the Fuji X-E2, you'd be hard pushed to spot the differences between it and the X-E1. On the front plate, the only thing that appears to have changed is the inscription in the top right-hand corner, with the grip, AF-assist light and focus mode dial all staying as they were. 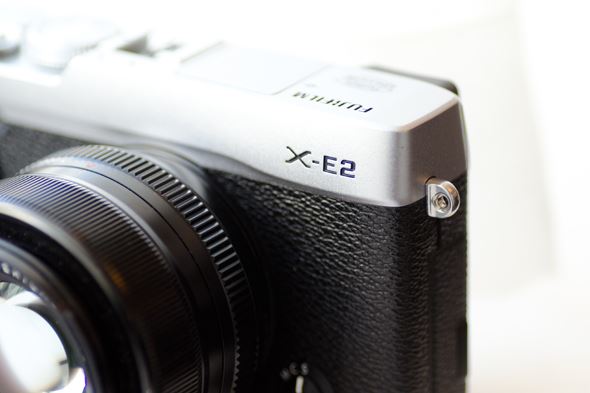 Things get a little different on the top plate, however, with the exposure compensation dial now gaining an extra EV stop in either direction (now travelling between +/-3EV). The shutter speed dial also now has an 'x' next to the 1/180sec marker to show the camera's maximum flash sync speed. 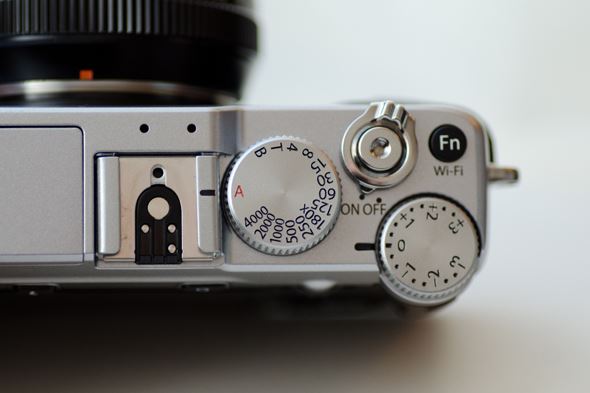 Fujifilm has also widened the space between the 1/4000sec and 'A' positions on this dial in response to feedback from X-E1 users, the complaint being that it's too easy to shoot past the former when turning the dial, and has also inscribed 'Wi-Fi' underneath the Fn button. A further change, which cannot be appreciated by the eye, is an adjustment to the exposure compensation dial's torque. This is also said to have been made in response to X-E1 users' feedback, from those who found it had a tendency of turning inadvertently when brushed or knocked (a common issue on models with such a dial here). The shutter release button next to this, meanwhile, is still threaded as before. 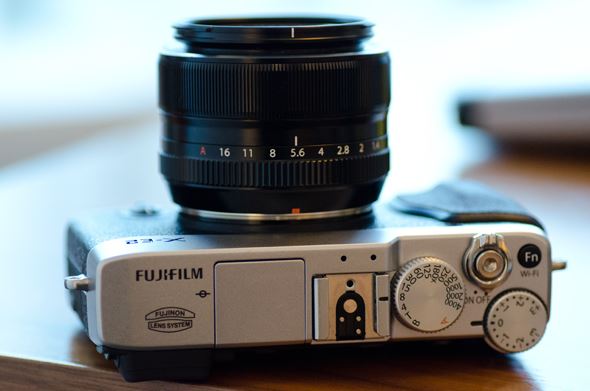 Things get a little more interesting around the rear, with a gentle reshuffling controls. The Q menu button now stands more prominently next to the rear command dial, with its former position (on the right hand side of the back plate) now taken up with the AF-L control; this had previously been twinned with the A-EL control above it. The AF control used to change the position of the focusing point has also now been reassigned to the menu pad dial, and in its place is a user-customisable Fn2 button, which is also used to delete images in playback.

Pressing the Q menu button once again brings up the familiar screen of 16 different icons, each representing a different shooting parameter or option. This is a more convenient way of changing commonly used controls than through the main menu system, although those that want to can make life even easier by assigning specific functions to the Function buttons. 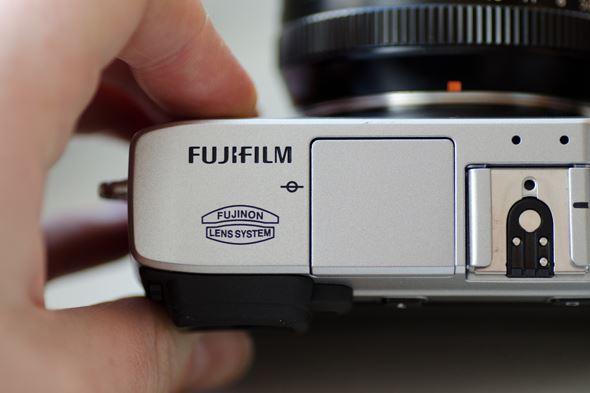 The size, clear labelling and positive feel of the camera's buttons all makes for a fine user experience (just as it is on the X-E1), and Fuji continues to use one of the clearest graphic user interfaces found on such a model. The viewfinder is, once again, bright and clear, and realistically it couldn't be any larger without it being too large; the entire scene can be seen easily, while all exposure information is displayed with excellent contrast

At just 300g (excluding the battery and lens) the camera also isn't terribly weighty, despite the fact that its build quality appears just as good as the X-E1's. This is great for those that want a premium model such as the X-E2 but don't want to be burdened by its weight.

We look forward to seeing how the camera performs in our forthcoming Fuji X-E2 review.