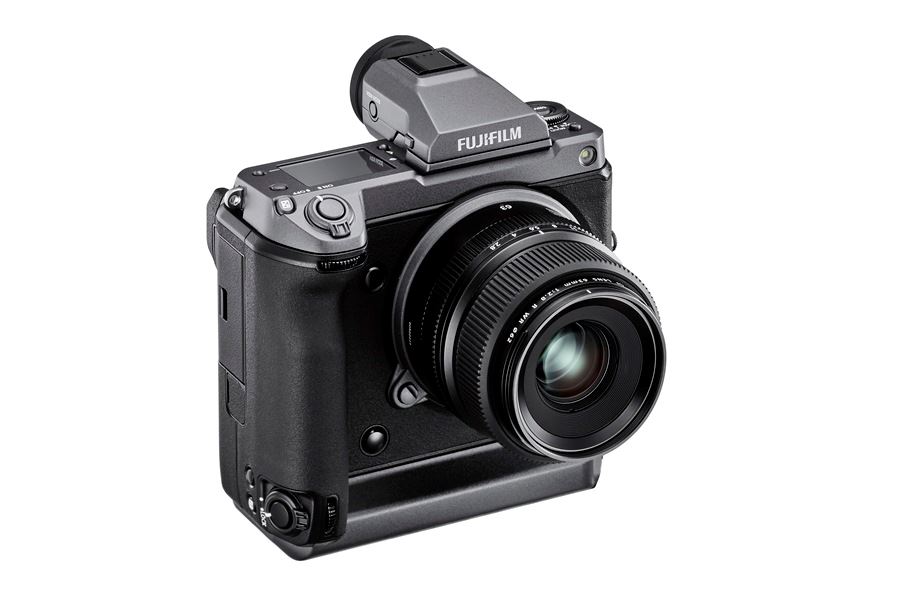 The new Fujifilm GFX 100 builds on the solid foundations of quality put in place by the GFX 50S and GFX 50R, and shoots skywards, boasting a whole new set of impressive features…

Its body is built around a large 102MP CMOS sensor, which makes the GFX 100 the highest resolution mirrorless digital camera ever produced! The sensor itself is a 43.8mm x 32.9mm Bayer array with no optical low-pass filter to ensure tack-sharp results. The camera’s native ISO is 100-12,800, while extended output is 50-102,400.

Fujifilm has stated that the GFX 100 – paired with the company’s GF lenses – will provide the industry’s highest level of image quality, with exceptionally high resolution and colour reproduction. The GFX 100’s ridiculously high resolution requires a powerful processor to manage all of that information. The camera uses Fujifilm’s latest image processing engine, the X-Processor 4, to ensure high-speed results, even with the mountains of data involved.

Its body is built around a large 102MP CMOS sensor, which makes the GFX 100 the highest resolution mirrorless digital camera ever produced!

As you’d expect, the camera sports Fujifilm’s unique colour science and you can even apply Film Simulation modes including the coveted ACROS, and for filmmakers, the ETERNA cinema mode (the latter being a GFX system first).

The X-Processor 4 helps the GFX 100 to achieve some impressive specs, like a start-up time of just 0.4sec and a maximum continuous framerate of 5fps – up to 41 JPEGs or 13 uncompressed RAWs – so you never miss a moment. The combination of that big sensor and cutting-edge processor means the GFX 100 has been afforded a 16-bit RAW mode, which was repeatedly asked for by professional users. That really is the great thing about Fujifilm – the manufacturer listens! 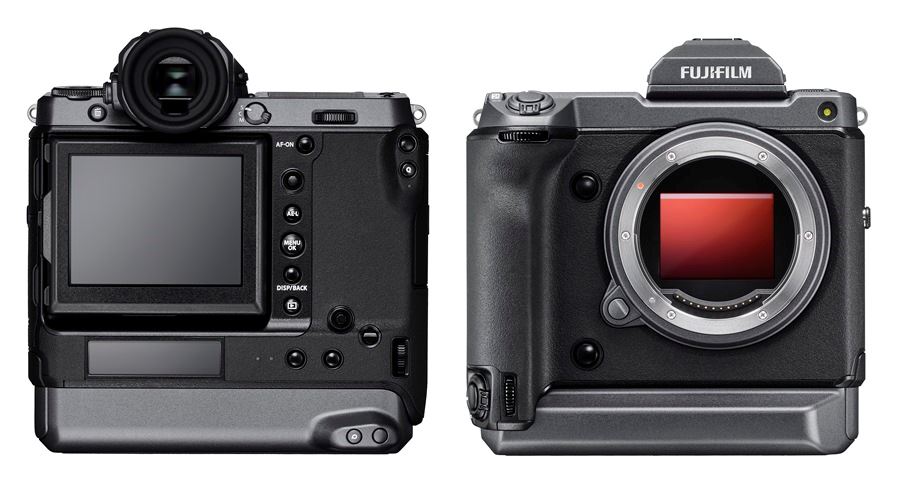 Something the GFX 100 had to overcome was that using the camera handheld would make it exceedingly difficult to take crisp shots (what with all those megapixels). However, it looks like Fujifilm has managed to solve this potential problem by fitting the GFX 100 with 5-axis in-body image stabilisation [IBIS]. To make matters even more impressive, it’s the first camera with a sensor larger than 35mm to do so. The IBIS provides a whopping 5.5 stops of stabilisation, so the GFX 100 really can be a go-anywhere, high-end commercial camera.

Fujifilm’s immensely popular Fuji XT3 has been commended for its fantastic autofocus system, and this has been adopted by the GFX 100 to provide a fast and accurate phase detection AF system, something we aren’t used to seeing in cameras with a sensor larger than 35mm. The camera hosts 3.76-million phase detection pixels, spread evenly over its sensor for a high standard of AF in single point, wide tracking and zone AF shooting.

The GFX 100 boasts new advances in Face and Eye Detection AF too, with significant improvements in tracking erratic movements and side profiles, and catching focus at further distances. This jump in ability looks set to make the GFX 100 the ideal camera for those red carpet or runway moments. 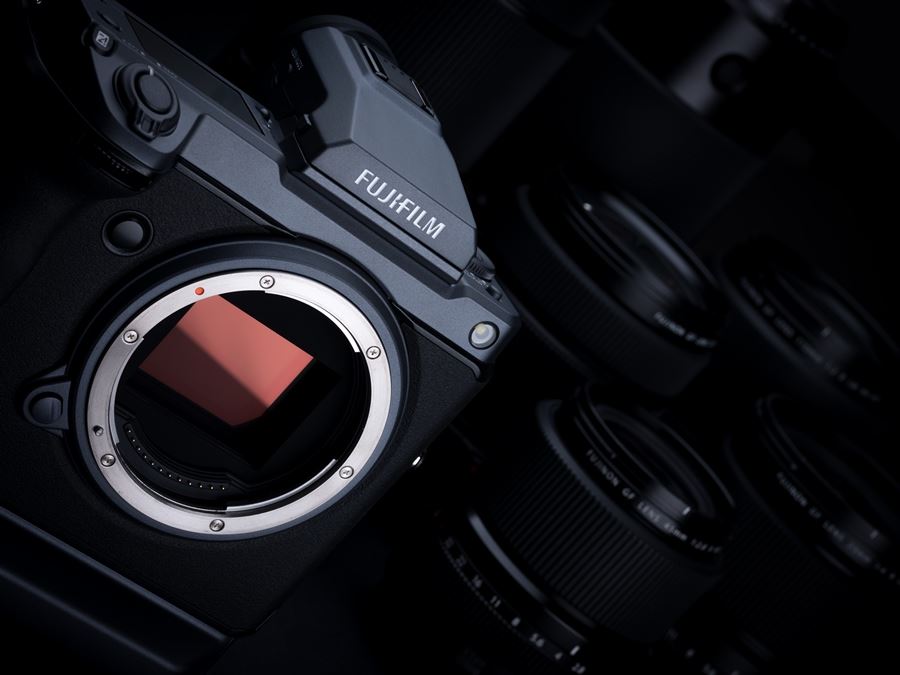 With the likelihood that this camera will often be used for commercial photography, it’s important that the body is built for ease of use in a professional environment. The GFX 100 is capable of taking two NP-T125 batteries (lasting for approximately 800 shots when using the rear LCD), and can also be powered and charged through the USB-C connection. Best of all, Fujifilm tells us that two batteries will be included in the box.

For jobs when speedy transfer is necessary, the GFX 100 has you covered because it’s the first GFX model to support IEEE802.11ac 5GHZ for fast wireless image transfer. Like the other models in the GFX range, this model is compatible with Tether Shooting Plug-in Pro for Adobe Photoshop and Lightroom, as well as Capture One Pro Fujifilm.

If all of the above wasn’t enough to tempt the professional user, the GFX 100 also sports an impressive video specification to boot, so you can capture those moments you really don’t want to miss on a shoot. Thanks to the X-Processor 4, the GFX 100 is able to shoot 4K 30fps in 10-bit 4:2:2 externally and 4:2:0 internally. It features a full-sized HDMI out and offers video users the benefits of medium format, so we’re expecting impressive ISO performances, gorgeous colour rendering and incredible depths of field. 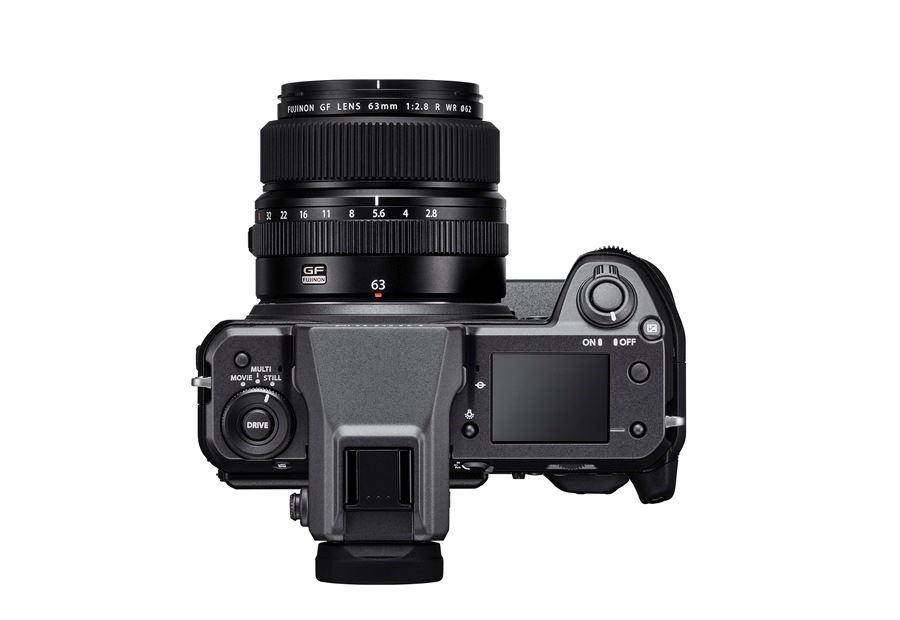 The GFX 100’s body is designed to be robust and lightweight. It’s made of magnesium alloy and weighs just 1,320g, including a battery and two memory cards. The inner frame has also been designed to directly couple the sensor and IBIS unit with the lens mount, so the camera can maintain ultimate durability against external force. If that wasn’t enough, the body is sealed at 95 points (including the EVF) making it both weather and dust resistant.

The device can shoot in extreme temperatures (down to -10°C and up to 40°C) and in humidity’s of 10% to 80%, without the formation of condensation. This makes the GFX 100 more than capable of dealing with situations that are a little more rugged than your average studio.

Anyone planning to spend most of their time with the GFX 100 outside might want to consider the optional EVF Tilting Adapter EVF-TL1. Fujifilm tells us: “The world’s highest resolution 5.76 million dot OLED panel has been used to develop the … high definition EVF unit”. As you’d expect, the EVF features 100% coverage and works alongside the 3.2-inch, 2.36-million-dot rear LCD touchscreen – helpful with extremely precise focusing.

Who’s it for? The Fujifilm GFX 100’s medium format sensor, monster resolution and top-notch tethering abilities will certainly appeal to studio professionals. However, that impressive in-body image stabilisation will surely pique the interest of a much broader professional demographic.

Why should you care? The GFX 100’s jaw-dropping specification lives up to the GFX system’s reputation for ground-breaking image quality and high-end professional appeal, and then some. We’re currently awaiting a review sample with bated breath, so watch this space…

We’re expecting stock of the Fujifilm GFX 100 at the end of June. Until then, stay up to date via our YouTube channel, Facebook, Twitter and of course, the Wex Blog.

Finance available
Up to £900 Cashback