I was intrigued when I received a press release from the National Portrait Gallery in London, announcing an important photographic exhibition entitled, ‘Gay Icons’ starting this month. It’s an exhibition of 60 portraits that celebrate the contribution of gay people and gay icons to history and culture.

Within the exhibition there are also portraits of the ten selectors, photographed by Mary McCartney and each of the ten selectors has worked with the Gallery to select six images of their own personal ‘icons’. Their choices make an intriguing mix that include some well known icons who may or may not be gay themselves. The images also reveal some surprises and the hope is that the audience will be encouraged to think about familiar faces in a new way.

The themes that run throughout the exhibition include inspiration and how the ‘icons’ have inspired each of the selectors in some way. Human rights are another theme that is explored, featuring images that relate in some way to the struggles of other minority groups.

Leaving gender to one side for a moment, for me this a great opportunity to see some superb portraits by photographers that include Andy Worhol, Lewis Morley, Snowdon, Terry O’Neill and the wonderful Cecil Beaton.

I visited the Gallery and I must say that it’s an exhibition that you should put on your ‘must see’ list for this summer. It runs until 18th October 2009 and it really is a diverse group of portraits. 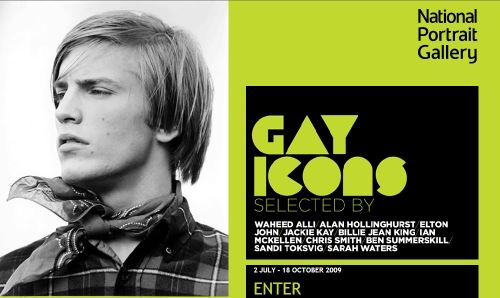 Looking at any exhibition often throws up more questions than answers and this show is no exception. I wondered how, for instance, the selectors had made their final choices. There must be hundreds of different portraits of some of the ‘icons’ to choose from, so why did they pick for example that particular image of Lady Di, or say that Bessie Smith portrait? What was it about that particular image that captured the spirit of that icon? Alas we will never really know and will have to look at the 60 images the selectors have chosen and make up our own minds.

I’ve chosen a few of my favourite portraits from the show that I hope will give you a flavour of the exhibition.

Amongst Elton John’s choices, which also included work by Snowdon and Warhol, he chose this portrait of his friend Bernie Taupin shot in 1975 by Terry O’Neill. O’Neill is well known for shooting fashion and celebrities in the swinging 60’s. He photographed the great and the good in a very natural way, unusual for the time. The image of Bernie Taupin shows this relaxed style. 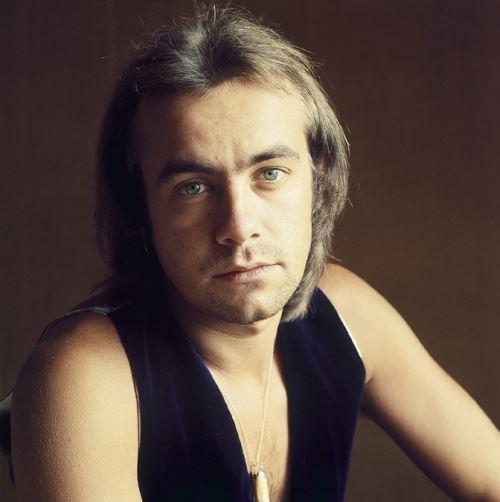 Chris Smith selected two superb portraits by Cecil Beaton and this fine portrait of Virginia Woolf by Gisele Freund. Freund was born into a wealthy Jewish family in Berlin. Her father gave her a Leica when she graduated from school. She escaped to Paris in 1933 to avoid Nazi persecution and also worked in England for Life Magazine. I love this expressive portrait, it’s so full of life. 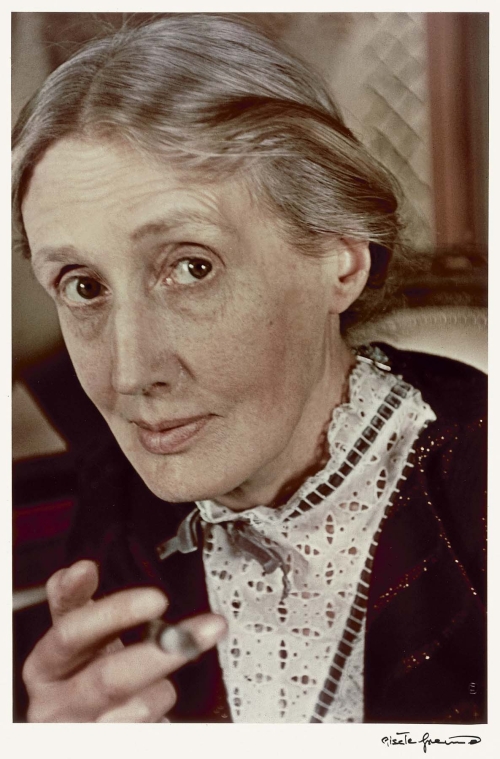 Another of Smith’s choices was this black and white portrait of Alan Turing. It was taken in 1951 by the Elliot & Fry photographic studio in Baker Street London, originally founded in 1863 who specialised in society portraits. Unfortunately the studio was bombed during the Second World War and much of its early output was lost. This portrait of Alan Turing, the famous mathematician and cryptanalyst of Bletchley Park was very typical of its time. 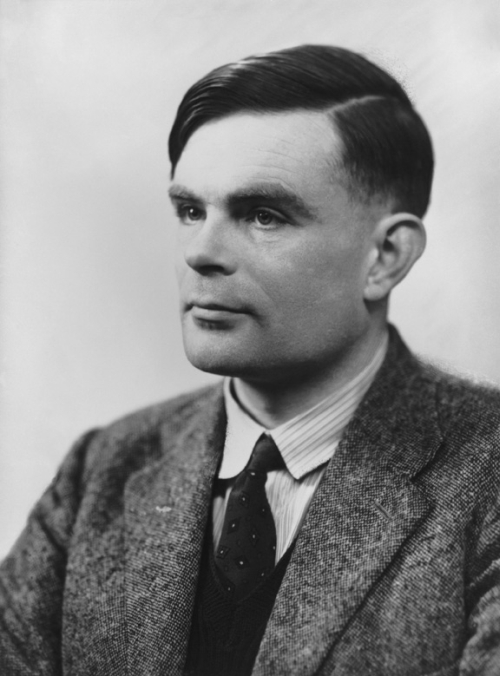 Alan Turing by Elliott and Fry 1951

Sandi Toksvig chose a beautiful little portrait, a card de visite of Rosa Bonheur dated 1858 and this portrait of K.D.Lang by Jill Furmanovsky. Furmanovsky was born in 1963 and came to London with her parents in 1965. She studied textile and graphic design at the Central St.Martins College of Art & Design from 1972-74. With virtually no training, she became the official photographer at the Rainbow Theatre, one of London’s rock venues at the time. She has since photographed every rock star you can think of, often very thoughtful portraits in black and white, the K.D.Lang portrait is a classic. 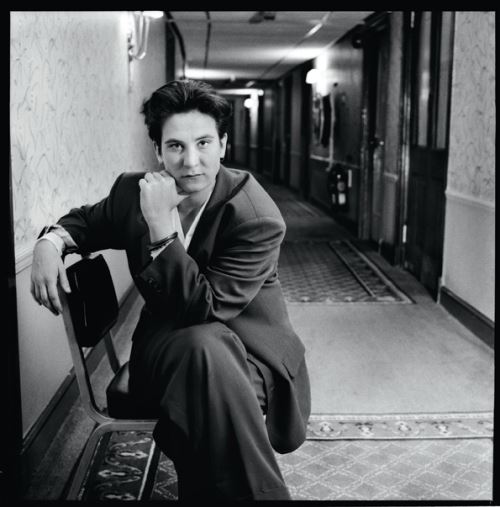 Ben Summerskill chose this striking Lewis Morley portrait of Joe Orton. Morley himself was born in Hong Kong in 1925, and his family moved to England after the Second World War where he studied at Twickenham Art School for three years. As this portrait shows, he became a successful theatre photographer and also worked for Tatler magazine. Perhaps his name isn’t familiar to you, but it was Morley who shot the iconic image of Christine Keeler in that famous chair. He eventually immigrated to Australia where his career flourished. 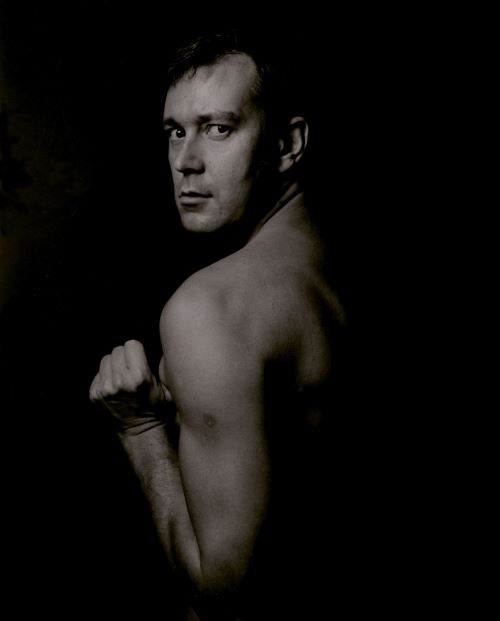 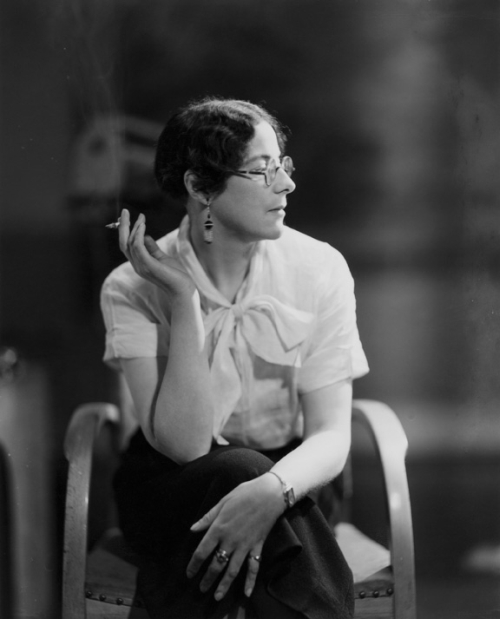 Jackie Kay chose a beautiful portrait of the jazz singer Bessie Smith by an unknown photographer and this unusual portrait of Quentin Crisp, shot outdoors by Fergus Greer. Greer also studied St.Martins in London and became photographic assistant to Richard Avedon no less and Terence Donovan’s studio manager. He is well known for this type of portrait capturing solitary figures against neutral backgrounds. 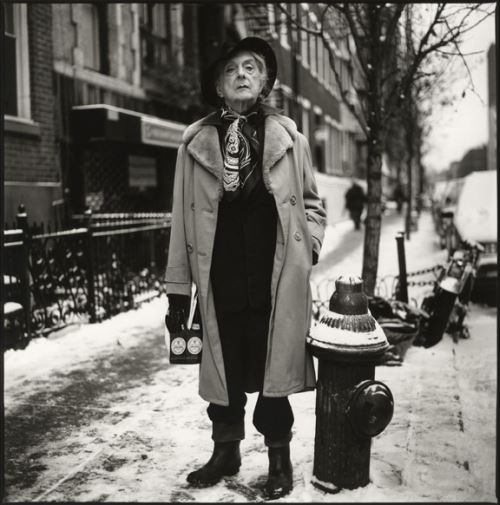 I do hope that you have enjoyed looking at these portraits as much as I did writing about them. I also hope that you get an opportunity to drop in to the National Portrait Gallery this summer to see the exhibition for yourselves. Believe me, you won’t be disappointed.

The Gay Icons exhibition is at the National Portrait Gallery, St Martins Place WC2H 0HE until 18th October 2009.

As a footnote to this article, I would also like to draw your attention to another important event. Just outside the National Portrait Gallery, in Trafalgar Square, Anthony Gormley’s ‘One & Other’ show has also started this month. It will feature members of the public who will occupy the empty fourth plinth in the square and are bound to offer some great photo opportunities. Don’t miss it.