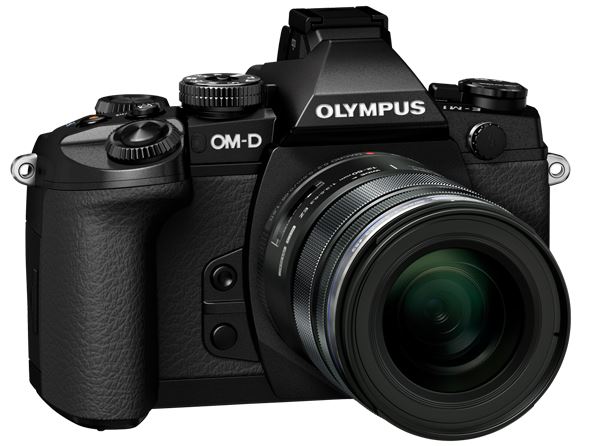 The camera follows the OM-D E-M5 announced last year and, being positioned above that model, stands as Olympus's flagship CSC.

The OM-D E-M1 incorporates a 16.3MP Live MOS sensor which outputs images in the 4:3 aspect ratio in a choice of Raw and JPEG formats. Although its effective resolution is similar to Olympus's previous CSCs, the sensor itself is new.

Also new is the TruePic VII processing engine driving the camera. Together with the sensor, it’s said to ‘take the performance of Zuiko lenses to new heights’, and uses a new Fine Detail Technology II feature to adjust processing according to the lens and aperture used. 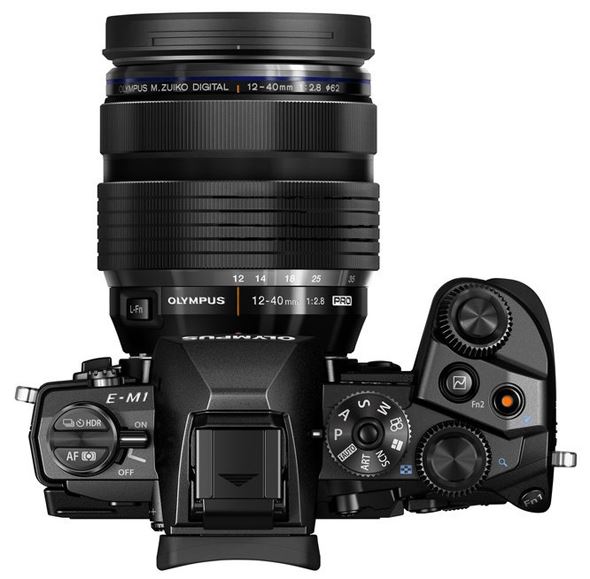 While the OM-D E-M5 and E-P5 sported a FAST AF system, the new OM-D E-M1 boasts a Dual FAST AF system in its place, based around the same ‘hybrid’ fusion of phase- and contrast-detect AF systems. It uses 37 points as standard, with a total of 81 available for selection, and is said to be 'among the world's fastest', according to Olympus.

It comes as little surprise to find the 5-axis image stabilisation, first seen on the OM-D E-M5 and later in the E-P5, has been included in the OM-D E-M1. This corrects for movements over roll, pitch and yaw, as well as vertical and horizontal shifting, and means that image stabilisation is not required in any mounted lenses. And, as with the OM-D EM-5, the camera is said to be splash-, dust- and freezeproof down to -10°C, according to Olympus’s in-house testing. 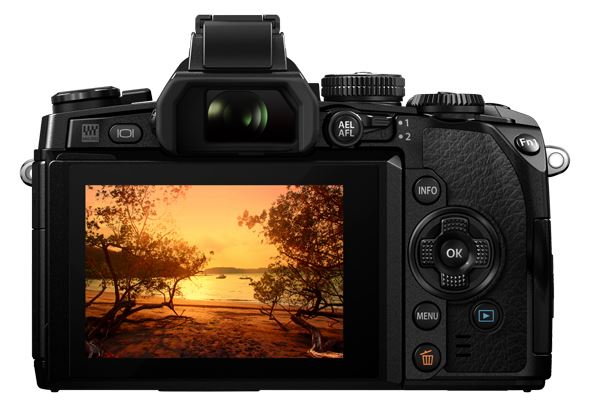 As with the OM-D E-M5, the new camera has an electronic viewfinder paired with its rear display, although both have been upgraded. The viewfinder now boasts the same 2.36million dot resolution as the VF-4 electronic viewfinder announced alongside the E-P5, with a magnification of 1.48x and the capability of automatic backlight adjustment. The LCD screen, meanwhile, is a 1.03m-dot touchscreen LCD, which can be pulled away from the camera's body and tilted upwards.

The OM-D E-M1 becomes only the second Olympus CSC to offer Wi-fi, after the E-P5. Not only does this allow images to be shared wirelessly but also for the camera to be controlled remotely via a smartphone or tablet. To use this, users will need to download the Olympus Image Share app which is currently available for iOS and Android devices.

Other features of note include an HDR preview mode which allows you to preview the effects of an HDR image before capture, as well as a 10fps burst rate which represents a 1fps increase over the OM-D E-M5. The maximum shutter speed has also been extended to 1/8000sec, while a new Diorama II Art Filter has joined the ones previously included to make a total of 12 different effects. Full HD video recording at 30p with stereo sound also features.

Olympus's clever Live Bulb mode, which allows users to monitor the progress of a long exposure as it's being captured, is also on hand. This feature can also be used in conjunction with the wireless functionality, which gives the user the potential to view the image on a larger smartphone or tablet display.

We spent some time with a sample of the OM-D E-M1 prior to its launch to see what effects the changes from the E-M5 have had. The sample itself was said to be as near to full production as possible, which makes it reasonable to assume that these comments will ring true for retail samples once they become available. 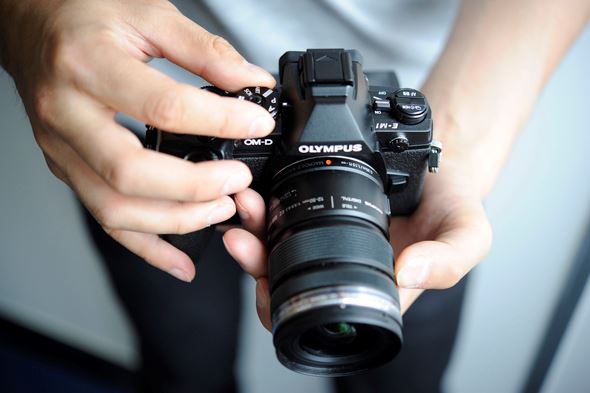 Although the new model is quite visibly related to the OM-D E-M5, there have been some significant design changes. The most obvious of these is the camera’s grip, which is far more pronounced than the one on the OM-D E-M5. This gives it a form closer to that of a DSLR, which is decidedly less compact than before. Nevertheless, this improves handling, particularly with longer and heavier optics. 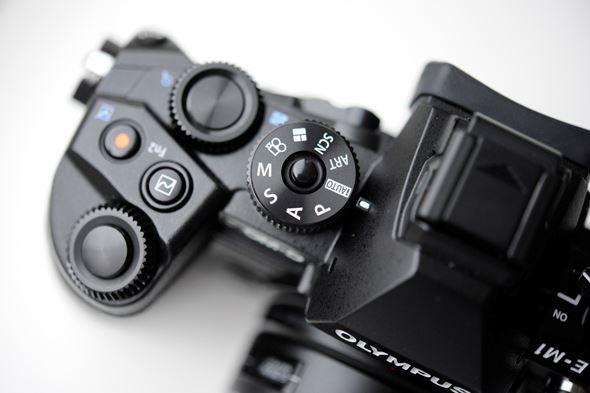 This grip has its command dial and shutter release button at its peak, while behind it sits a further command dial. In between these there are buttons for movie recording and to activate the Highlight/Shadow function, the latter also serving as a customisable FN2 button, while to the side of these there’s a new a mode dial with a central locking button. 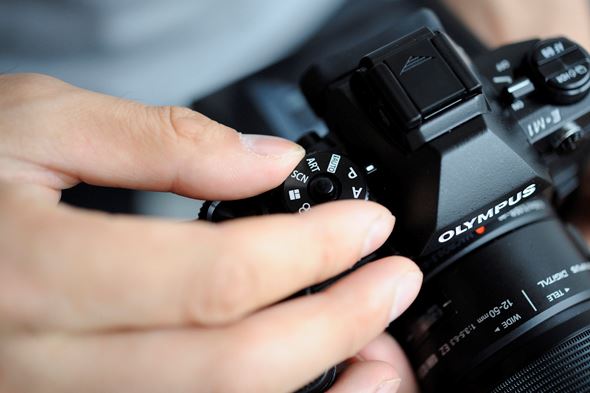 Unlike on other cameras such as Nikon's D800, this locking button is not always locked at default. Pressing this button once locks the dial in position, while pressing it again unlocks it. In effect this means the locking option itself become optional, although, perhaps ironically, this also increases the chance of it being unlocked and locked unintentionally when carried around. 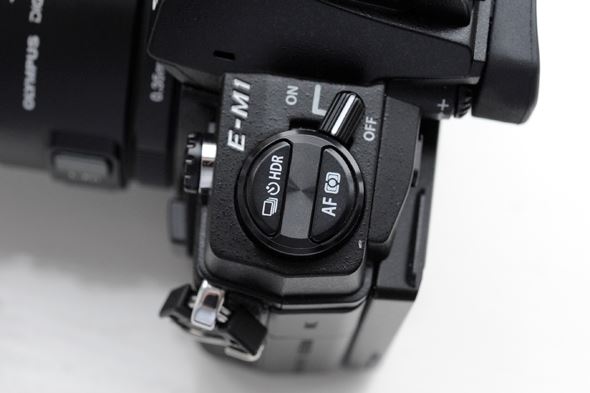 On the other side of the camera, the Power switch which was previously positioned on the OM-D EM-5's rear plate has joined a handful of other controls for regulating focus and metering, as well as the camera's drive mode and HDR functionality. Something which we found a little strange is that opening any of the doors to the ports on the side requires you to first lift the screen up and out of the way to gain access (below). Given the frequency with which this is likely to happen it's not a significant issue, but it might bother over time. 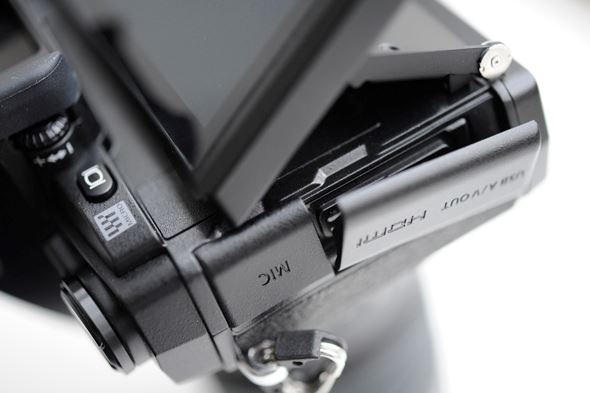 One thing that has improved from the original OM-D E-M5, however, is button access. On the OM-D E-M5, the Play and Fn1 buttons were somewhat fiddly to access, on account of them lying just past the protruding display, although these have now been repositioned and restyled. In fact, the majority of the buttons around the OM-D E-M1's body have a pleasingly positive spring to them when pressed - it's only really the display button (below) which suffers from the aforementioned issue. 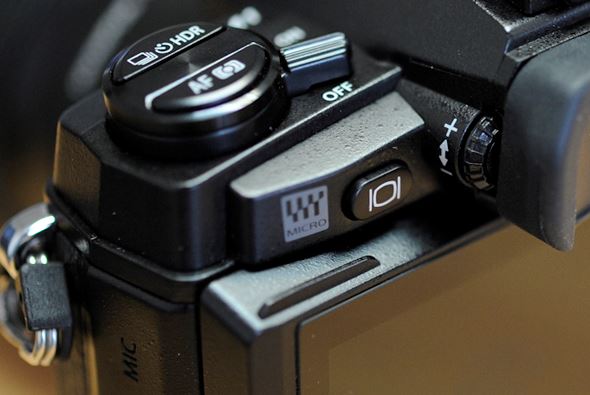 The camera focuses very quickly, and even against low-contrast subjects it did well to find focus swiftly. Naturally it came unstuck now and again, but then the same would be true for most cameras when tasked with focusing against a plain, featureless subject. The focusing system can also be activated by touching the screen, and the screen's responsiveness ensures there's very little delay. Potentially in darker conditions the camera would slow down a little, although this isn't something we managed to test in our brief time with the model. 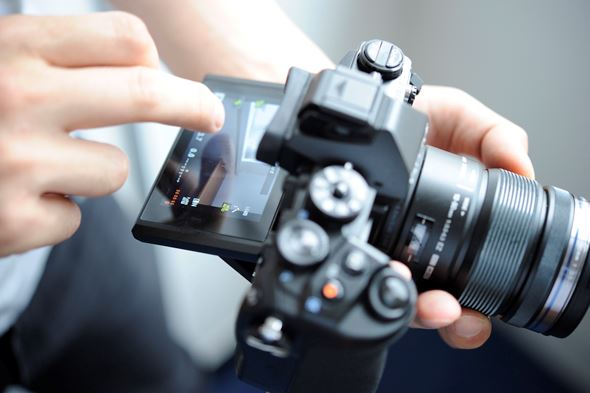 The rear OLED display on the previous OM-D E-M5 was a fine performer in itself, and the LCD used in its place here appears just as good if not better. As the images below show, its viewing angle in balanced conditions (below, left) is excellent, with contrast maintained as the screen is viewed from increasingly obtuse angles. In harsher light (below, right) there is a slight drop, but not as much as may be expected. 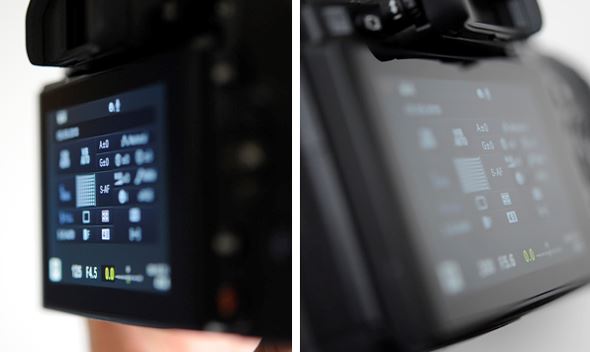 The viewfinder is one of the most significant upgrades over the OM-D E-M5, and it's difficult to feel underwhelmed by what it offers. Its two standout features are its 2.36m-dot resolution - significantly higher than the previous 1.44m-dot resolution - and its 1.48x magnification. The combination of the two means you get as large a view as is required without it being so expansive that you need to look around it to view the whole scene. The display responds very swiftly to changes in scene brightness too and, in the conditions in which it was used, maintained an exposure that allowed shadows and midtones to be seen clearly. This cannot be said for all such viewfinders, and is one reason people are deterred by them, so it's great to see Olympus putting in the effort to make this so usable. 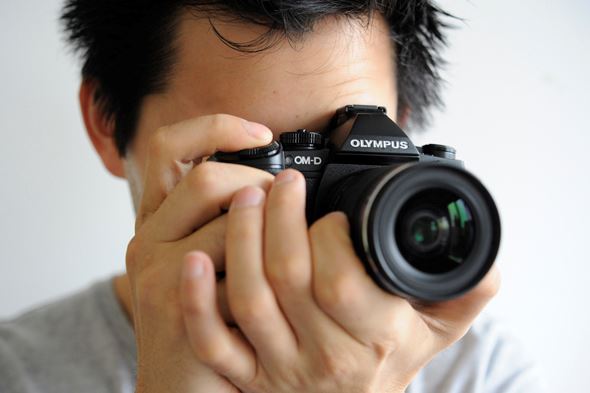 Finally, although it's not something we were able to fully put to the test, it's worth mentioning that the OM-D E-M1’s weather-sealing gives it a significant advantage over its peers. Of course, given that the OM-D E-M5 was also weather-sealed it comes as no surprise to find it here, but it's still great to see Olympus concentrating on such genuinely useful features. No doubt this will broaden its appeal to photographers frequently shooting in sub-optimum conditions. 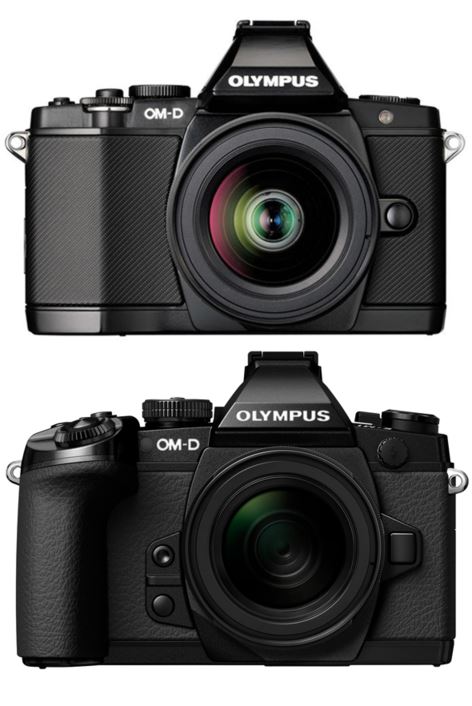 The front plate sees a handful of changes, most significant of which is the different rubber finish. There's also a flash sync port and a restyled lens release button, as well as two additional buttons next to the lens mount which can be used to bring up specific functions. 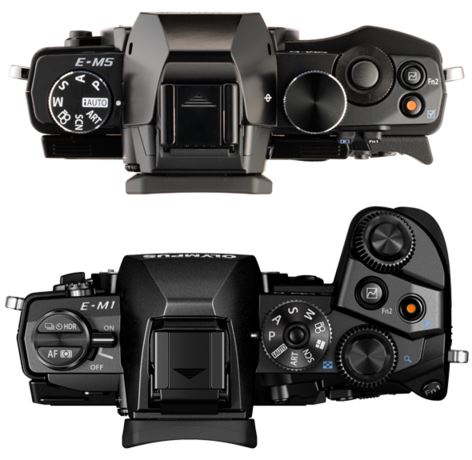 Although the OM-D E-M1 maintains a mode dial, this has been restyled and equipped with a locking mechanism. The new grip has also allowed the command dials to be spaced further apart from each other, although the movie record and Highlight+Shadow/Fn2 buttons have remained. 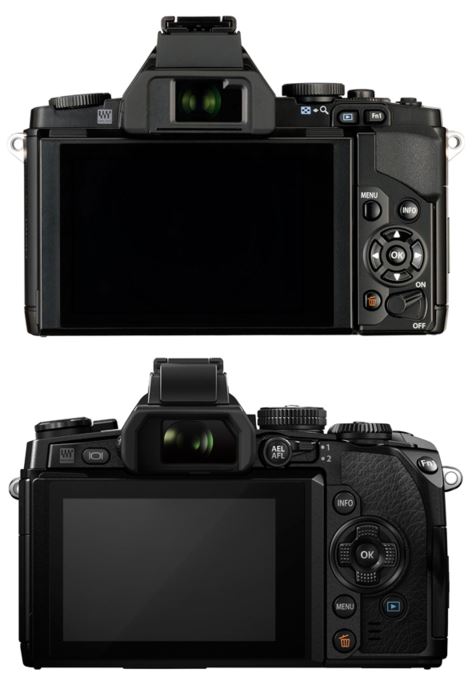 The rear welcomes a different display to the OM-D E-M5, now a 1.03m-dot touchscreen LCD (though with the same tilt facility). This unit is almost certainly the same as that found on the E-P5. The rear also shows the camera to have adopted a less angular form, with better spaced buttons and more liberal use of rubber for comfort. 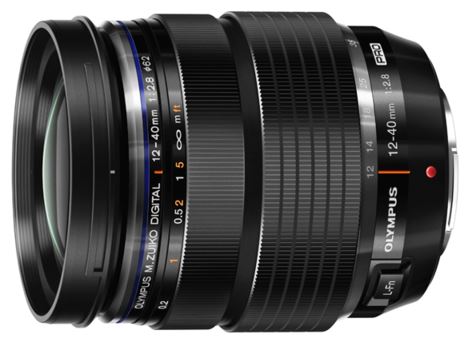 Olympus is also launching a new lens and battery grip alongside the OM-D E-M1. The M.Zuiko Digital ED 12-40mm F2.8 Pro, which will be available as a kit option with the new camera, boasts a constant f/2.8 aperture and extra-low dispersion elements to better control chromatic aberrations. A new grip, the HLD-7, will also be launching alongside the camera.

The Olympus OM-D E-M1 will be available as a body-only option and in a choice of two lens kits. One kit will include the existing 12-50mm f3.5-6.3 ZUIKO Digital ED optic while the other will have the new 12-40mm lens. These are available for pre-order via the links below.