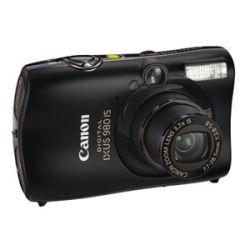 The two latest cameras in the Canon IXUS range look exactly as you expect them to. Cool, sophisticated... and actually quite exciting. The classic silver model is ever-present, but Canon have upped the stakes in the style-ometer, offering a sexy, glossy black and a glittering gold in the Canon IXUS 980 IS and Canon IXUS 870 IS respectively.

So what do these cameras have to offer? Well, both feature Canon's new DiG!C 4 Processor, both feature an optical Image Stabiliser and both feature flawless, 30fps VGA video shooting. The compression technology has been improved on both the IXUS 980 and the IXUS 870 to enable 40% more footage to be stored to memory cards than possible with any of the previous IXUS models - with no reduction in quality.

Individually, the Canon IXUS 980 IS is the new flagship of the IXUS range and offers a high 14.7 megapixel count, a 3.7x optical zoom and most excitingly, a Manual Mode that allows control of shutter speed and aperture - although the choice of aperture settings is limited. The creative opportunities afforded by the new Manual Mode are particularly pleasing developments for those that want to take their lighting abilities to the next level and try out some more unusual shooting environments. On the other hand, the Canon IXUS 870 IS offers 10 megapixels and a 4x wide-angle (28mm) optical zoom. A high resolution 3" PureColour LCD II allows you to review your shots of your friends and family with ease. With Face Detection Technology that offers Face Select & Track as well as FaceSelf-Timer, improved Motion Detection Technology and i-Contrast which brings out the detail in shadowy images, the DiG!C 4 Processor has brought some great improvements to Canon's range. Perhaps the most impressive of these at the launch earlier this week, was the FaceSelf-Timer. No more do you have to choose between a delay of 1, 3 or 10 seconds before your camera takes its shot. Now, the Canon IXUS 980 IS and Canon IXUS 870 IS will count the number of faces in the frame and wait until another has joined them before taking the shot! Isn't technology amazing?