New look Tate Modern extension has photography in its DNA

A sneak preview of the Tate Modern’s major new extension, which opens its doors on Friday 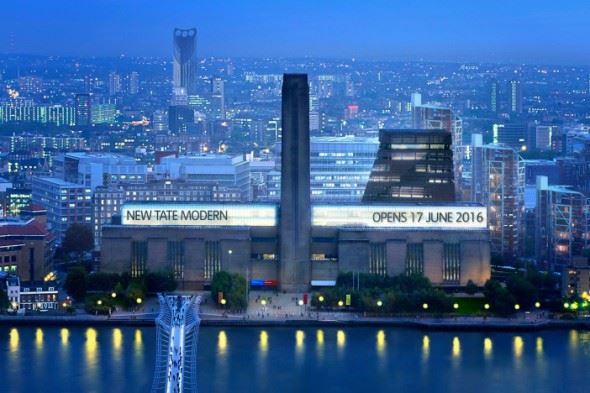 The newly extended Tate Modern is opening to the public on Friday June 17, and we were there today for the press opening. The new gallery extension has been designed by architects Herzog & de Meuron, and increases the Tate Modern’s size by 60%, enabling hundreds more artworks to be displayed, including photographs.

In a remarkable feat of engineering, the extension sits on a collection of underground oil tanks that have been repurposed to be dedicated performance spaces beneath the main gallery. The Tate Modern’s collection has been completely rehung to incorporate the extension and includes 800 works by more than 300 artists from 50 countries; 70% of the collection has been bought since the gallery opened in 2000.

In terms of photography, the policy of the new Tate Modern is to integrate photography into all the galleries, rather than keeping it in a segregated section. “Because there is 60% more space there is much more room for photography,” explains senior curator Simon Baker. “We’re showing some great new work for the opening, including displays by Boris Mikhailov, Sirrka Lisa Kontinnen, and Hilda and Bernd Becher.”

So there’s no specific floor or area for photography in the new Tate Modern, instead you’ll find it everywhere. Images by US photographer Suzanne Lacy, for example, can be seen alongside soundtrack recordings in The Crystal Quilt, a performance celebrating older women’s voices and visions. “Photo books have also been integrated into the displays,” explains Simon Baker. “All my colleagues are incorporating photography into the stuff they plan, so it’s part of the Tate Modern’s DNA.”

Simon and his colleagues work closely with photographers to decide how their images are going to be displayed, and there is a conscious effort to include more female artists – a key part of the overall strategy of the New Tate Modern. “We’ll also be featuring photography from all over the world, from classic documentary work to very conceptual installations,” he explains. “We’re very committed to showing photography in a way you don’t see anywhere else – as part of the history of art, not separated off from it. Photography has always been equal to other artworks, and will we always treat it that way. The newly extended Tate Modern is one of the best venues in Europe to enjoy photography.”

The newly extended Tate Modern opens to the general public on June 17. For full details, seehttp://www.tate.org.uk/visit/tate-modern