Nikon announce the J1 and V1! 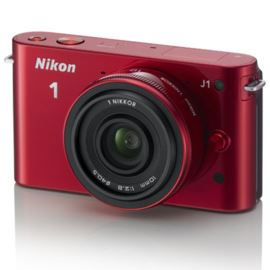 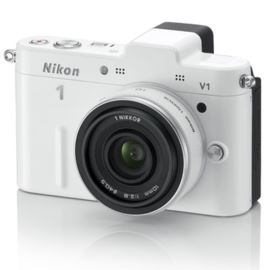 Nikon have gone back to the drawing board to re-create an authentic camera design and the result is this innovative breed - The Nikon 1. The 1 series has been promoted as intelligently hand crafted  to bring new levels of speed, simplicity, compactness and enjoyment to the way we shoot.

"Our engineers have managed to house an incredibly powerful processor and sensor in a sleek, minimalist Nikon 1 body design: people will be able to take shots they didn't believe were possible. These are not only the world's fastest cameras - they have features that have never been seen before: shooting modes like Motion Snapshot and Smart Photo Selector are going to let people capture images in ways they could never have imagined, and the 1 NIKKOR lenses are unique in the way they've been designed with portability and movie making in mind."

Nikon feels the need for speed...

For those wanting to capture moving objects, you need a camera equipped with a fast processor and shutter speed.

Based on the success of EXPEED 2, Nikon also introduced their new image-processing engine called ‘EXPEED 3’. With the combination of the EXPEED 3 processor, CMOS image sensor, and optics; both the V1 and J1 enable you to capture high-resolution stills and movies. The newly developed CMOS sensor (CX-Format) brings balance between the resolution, speed, and light sensitivity. In short this means that in low light conditions it will automatically switch to Contrast Detect AF and if the subject then moves it will switch to Phase-Detection AF. This allows you to capture superior quality images from shot-to-shot with no worry of inconsistent light spoiling the frame. This function of the Nikon 1’s make them perfect for capturing a series of images or event photography.

The Nikon 1 cameras also boast the world’s fastest auto focus* that offer an astonishing 73 auto focus points (when used in single point AF mode). Compare this for a second to the next fastest ILC – at 35 AF points. Both models also capture continuous shots at a blisteringly high-speed rate of 60 frames per second**. These two selling points alone should make it clear that Nikon are fast putting themselves at the head of the ILC pack (no pun intended – honest!). 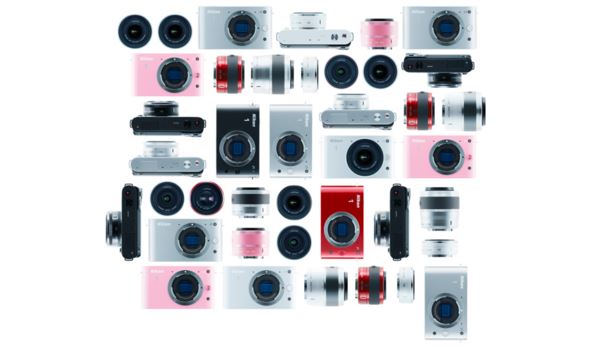 Want the perfect shot? – Smart Photo Selector gives you 5 to choose from

One of the other innovative features of these new Nikon 1s is the Smart Photo Selector. ‘Smart’ as it does the thinking for you and ‘Photo selector’ as you have 5 to choose from! With the simple press of a button, the camera will record up to 20 high-resolution images at an incredible speed and automatically select the best five. The auto-selection is intelligently based on facial expressions, composition and focus. Out of these five auto-selected images, the best shot is instantly displayed on the clear 3.0 inch LCD screen. The rest of the four are saved for you to choose from should you disagree with the technology. This feature ensures that you don’t miss any important shots, capture a single blurry image or end up with the subject just out of the frame.

Nikon also debuted a new technology called Motion Snapshot. Accessing the function is easy via the mode dial and when the shutter button is pressed, the camera simultaneously records a one-second slow-motion movie and a still image. After the shot is taken these two are cleverly combined to create a ‘living image’. This unique function encapsulates emotions that a still image alone might miss, keeping fleeting moments alive forever, like baby’s first smile or the look of surprise on the Birthday girl. 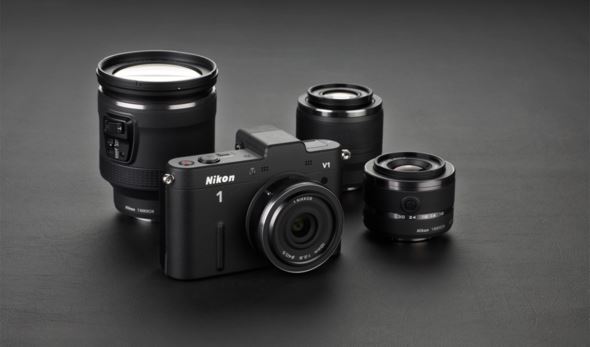 From Photographer to Film Director in the turn of a dial††

If you are keen cinematographer or just like the odd family event captured for facebook, the Nikon 1 V1 and J1 feature Full HD video. But the function doesn’t stop there. Whilst filming a video, you can simultaneously capture still images without interrupting the recording. The other special effect that Nikon has infused in video mode is slow motion – imagine adding drama, humour or a mix of both to your movies with this function. Action scenes also benefit from the Phase-Detection AF, allowing quick focusing on moving subjects even in low light.

The V1 is slightly more advanced than the J1, aimed mainly for enthusiasts who want to take their photography to the next level and make the most of the new technology that is available in this series. The body is built with a tougher overall construction with the addition of magnesium alloy re-enforced parts which provides a much heavier feel in the hands. Another impressive feature of the V1 is its bright high-resolution electronic viewfinder which fits seemingly into the cameras compact body. The electronic viewfinder helps to frame your shots in bright sunlight delivering a clear, stable view and 100% frame coverage. The V1 is also equipped with a Dust-reduction system to help ensure stills and movies are speck free. With the V1 a Stereo mini-pin jack (3.5mm) is incorporated allowing you to add the Nikon ME-1 Stereo Microphone. A perfect accessory for those looking to be the next Spielberg or Aronofsky.

The J1 is very similar to the V1 in technical specs, however, it is aimed more at the novice photographer who wants to explore the world of interchangeable lenses for the first time. The key differences here are that the J1 doesn’t include the Stereo Jack, the electronic viewfinder nor the ability to add an external flashgun. The screen resolution is slightly lower too at 460K dots per inch versus 921K in the V1 model. That said this shouldn’t deter you from buying the J1 as it includes the same amount of megapixels, fast auto focus and frames per second of the V1 model.

**When used in fixed focus mode. 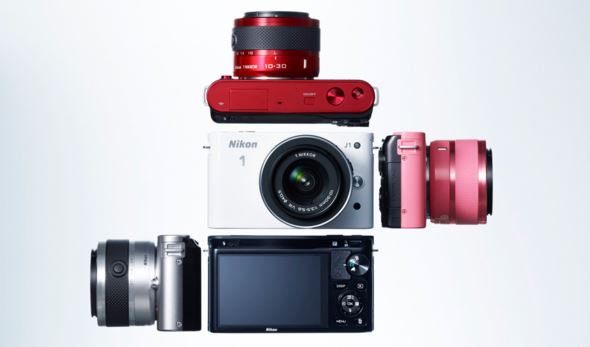 The Nikon 1 V1 is available to Pre-Order in an iconic-looking black or white body.

The Nikon 1 J1 is available for Pre-Order and comes in four different colours (in the UK, other colours available internationally):

Along with the V1 and J1, Nikon also launched their first ever 1 NIKKOR lenses which are compatible with the Nikon 1 cameras.

SB-N5 Speedlight flashgun – External speedlight for the V1 only

GP-N100 GPS Unit – allows you to geographically tag your shots and movies.