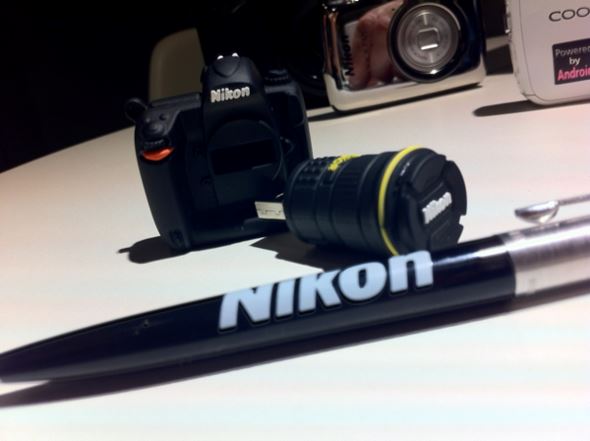 This caused a buzz today! A USB stick posing as a teeny tiny Nikon DSLR (pen is for scale)

Although I had some hands-on time with the D600 last week, I headed back to the Nikon stand at Photokina today to chat to the team about a few of their new compact cameras and for another quick look at their latest DSLR.

Is it a spy camera? Well it almost could be, it's that tiny! Smaller than a credit card and weighing in less than 100g, this isn't going to replace the DSLR in your kit bag but it might just find a place in your pocket. 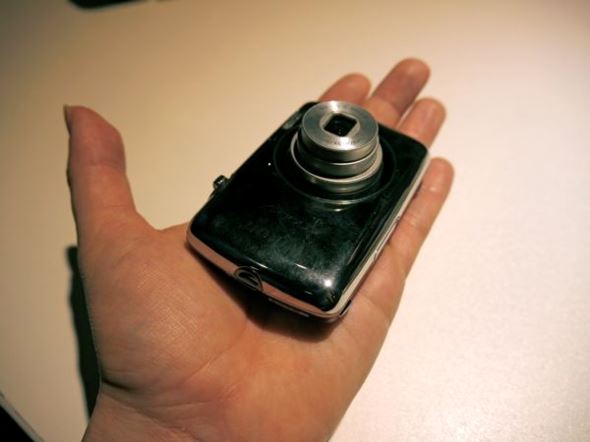 The Nikon S01 in the palm of my hand (and I have pretty small hands!)

Small and simple is they key with this one - no memory cards, no removable battery, no buttons on the rear of the camera and just 3 buttons on the top: On/Off, Shutter and Playback. It has 7.3GB of internal memory, which will provide up to 3 hours of video recording in VGA format. The one USB port allows you to transfer your images as well as charge the camera via your computer. 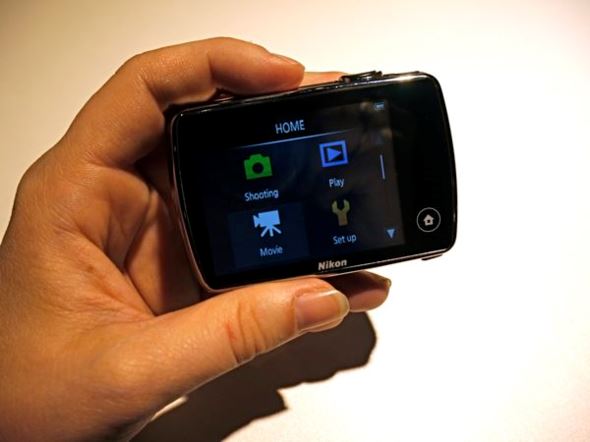 The touchscreen menu on the S01

It has a 10.1 megapixel 1/2.9"-sized sensor and a f/3.3-5.9 3x optical zoom lens that provides a focal range equivalent to 29-87mm. Seeing as there's no buttons on the rear of the S01, you can make your way through the camera's menus via the 2.5" touchscreen. As well as both stills and video shooting up to 720p, there's also a variety of creative shooting options available.

The Coolpix P7700 has a newer shape when compared to the P7100 (which it replaces) and I definitely prefer this updated, straighter-across-the-top look, as the P-series cameras before it had a shape that dipped down on one side. Aesthetics aside, the P7700 is a camera for serious photographers who want something small but with advanced features and manual control when their DSLR is just not practical to carry. It has a rugged, hard-wearing build that will suit those who spend a lot of time shooting in the outdoors as well.

In terms of spec, the P7700 has gained a few more megapixels on the model it replaces, pushing the total up to 12.2 megapixels. Nikon have also upgraded the lens on this compact, which now shoots to a maximum aperture of f/2-4 at the same 28-300mm equivalent focal length - the P7100 had a maximum aperture range of f/2.8-5.6. The other key development to this model is that the P7700 now shoots full HD 1080p video, whereas the P7100 before it was limited to 720p. 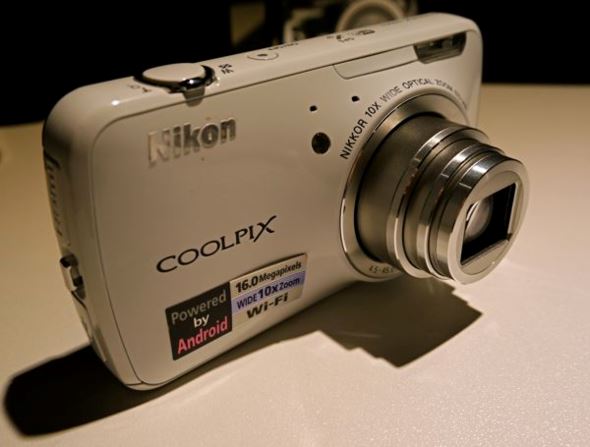 I also had a chance to test out Nikon's Android-powered Coolpix S800c at Photokina, which was really fun and easy to use. Some of the touchscreen technology out there is not as reactive as what we're used to on our smart phones but the speed and sensitivity of the S800c touchscreen was impressive.

I wasn't connected to a Wi-Fi network while playing with the camera, but clicking through into the Instagram and Twitter apps, the layout and functionality is exactly as you'd expect and already familiar with. As you can see from the photo below, you have access to shooting and playback menus as well as web browsing, Gmail, sharing sites like Facebook and YouTube as well apps like Skype (and many more are downloadable via Google Play) 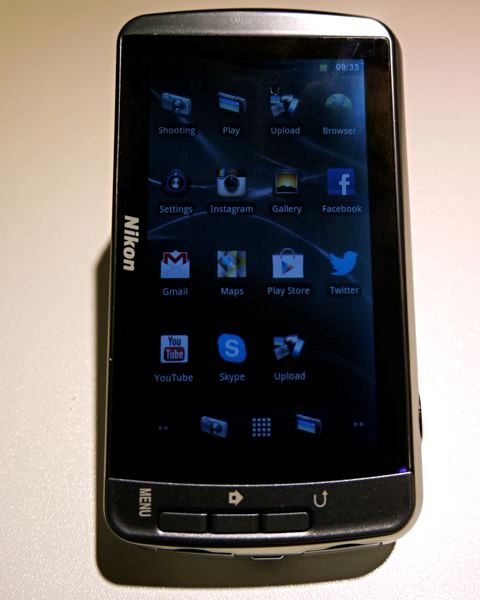 Android phone users will be familiar with the S800c menu 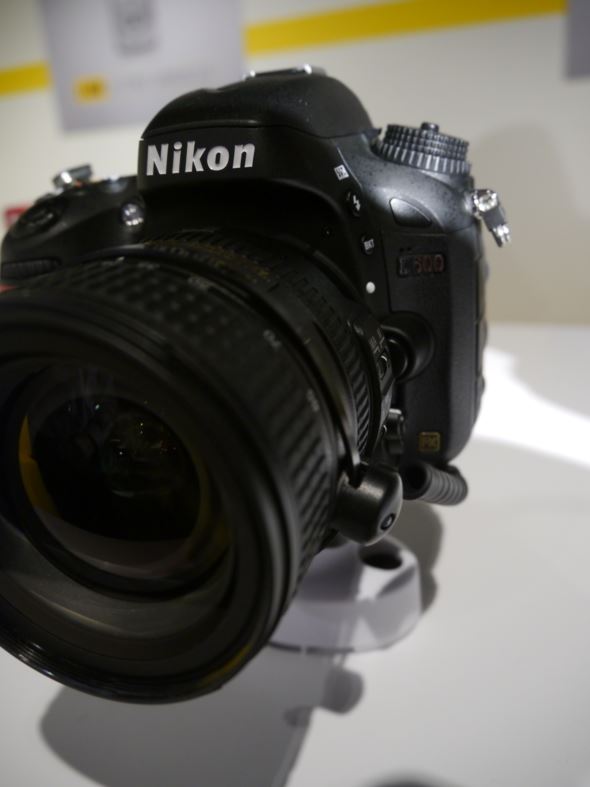 I wrote about my hands-on time with the Nikon D600 last week, so my goal at Photokina was to get another quick look at the camera and some more photos to share here.

One of our followers on Twitter asked about how video shooting on the D600 compares to the D800 and I'm told the two cameras have virtually the same functionality - both cameras will record FX and DX format 1080p movies in 30p, 25p and 24p, allow uncompressed output via HDMI to external devices and offer high-fidelity audio control. Both the D600 and D800 also offer index marking and time-lapse functions. 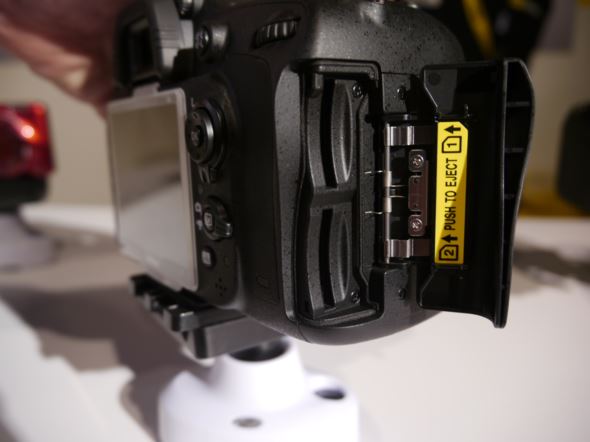 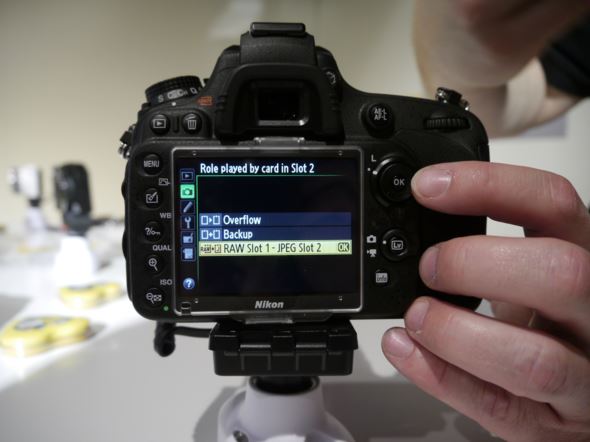 Select how you want your dual SD cards to operate - overflow, one as a backup or one in RAW/one in JPEG

It was great to get a second look at the D600 and I still really like the lightweight but solid feel to it when I picked it up again. If you have any specific questions about the D600, leave them in the comments below and I'll do my best to answer them for you!

The Nikon stand was really buzzing, with a lot of photographers there to see their newest full-frame DSLR. Their space at Photokina also featured a huge stage, with a range of scheduled talks and demonstrations throughout the show - if you're interested in watching them or seeing more of what was happening at the Nikon stand, check out the Nikon Photokina page on Facebook.