Panasonic has bolstered its Lumix G series of Compact System Cameras with a long-awaited successor to the Lumix GX1.

The Panasonic Lumix GX7 introduces a significant number of changes over the GX1, with the most interesting of these being an integrated, tiltable electronic viewfinder – a first on a Compact System Camera. This can be adjusted over a 90 degree angle so that in its fully extended position it lies parallel to the image plane, and with an LCD panel containing 2.76million dots it promises to perform to particularly high standard. 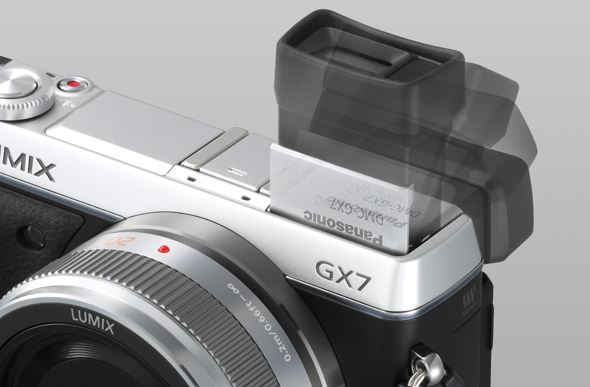 The Panasonic GX7 complements this with a tiltable rear LCD, which offers a resolution of 1.04million dots over a 3in panel. As with the recent Lumix GF6, this is equipped with touch-functionality for greater control over selecting the focusing point and general operation. 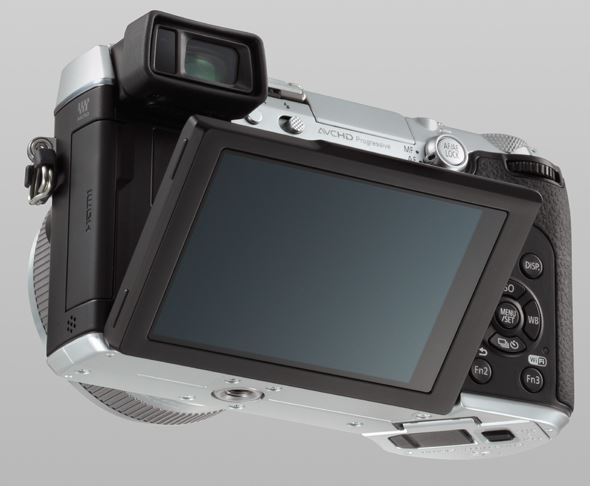 As Panasonic explained in its interview with Wex, the GX7 has also been furnished with a new Panasonic-manufactured sensor, albeit one with the same 16MP resolution as the sensors used inside previous Lumix G-series models. Combined with a new Venus Engine VIII, the camera is said to produce images with 25% less noise than the GX1 and more accurate colour reproduction too.

Interestingly, the GX7 is the first Lumix G-series model to sport sensor-based image stabilisation, which is said to offer the same benefit as the lens-based OIS technology incorporated into Panasonic’s lenses. Should an OIS lens be used with the GX7, the camera will default to lens-based OIS. 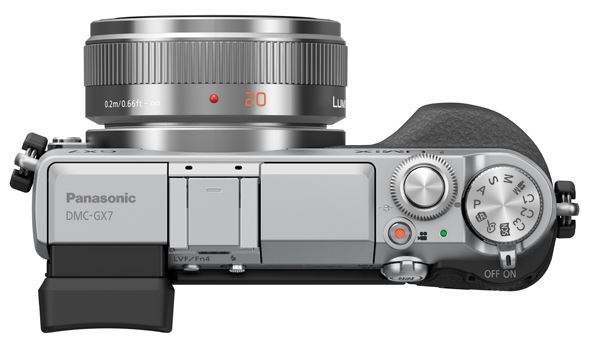 The magnesium-bodied Lumix GX7 also sports a top shutter speed of 1/8000sec, in order to increase its flexibility with wide-aperture lenses and in when used in brighter conditions. This is said to be achieved with a mechanical rather than electronic shutter, although an electronic shutter has also been included to allow for “silent” capture. 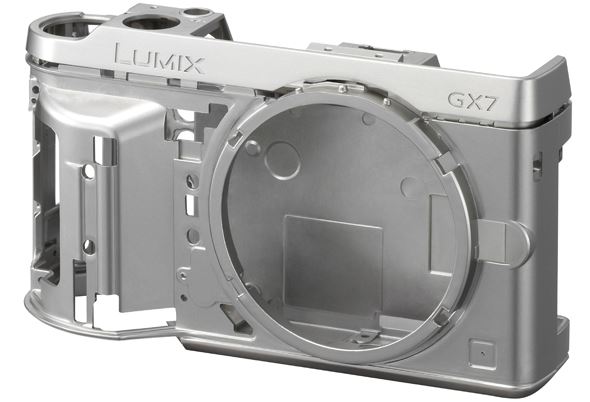 Predictably, the camera features Wi-fi and NFC functionality for the wireless transmission of images to other devices and the internet, with remote control over the camera possible through Panasonic’s Image App (available for Android and iOS devices).

The Panasonic GX7's burst mode is set to 5fps at its standard setting, which drops to 4.2fps when AF tracking is enabled. And, when such speeds are deemed to be too slow, this can be boosted up to 40fps at a reduced resolution. The camera also includes a useful focus peaking function, which can be customised with different colours to better highlight specific subjects. 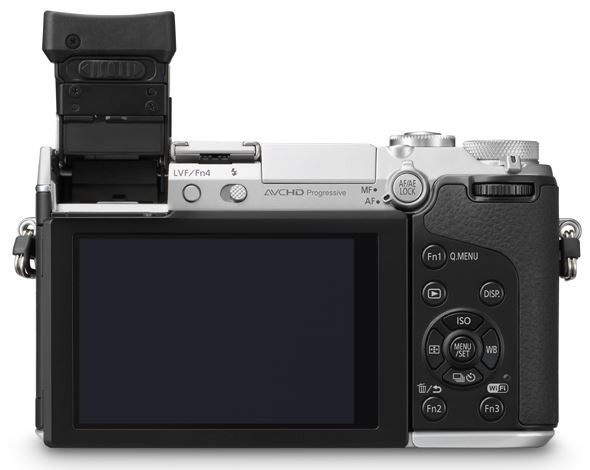 The Panasonic GX7 will be available in silver and black finishes, as a body-only option and as part of two lens kits. One of these lens kits will include the Lumix G Vario 14-42mm f/3.5-5.6 ASPH lens, while the other will include the recently announced Lumix G 20mm f/1.7 II ASPH optic.

The Panasonic GX7 is set to be available from September. You can pre-order the camera through the links beneath the hands-on preview below.

For the most part it’s fair to say the Panasonic GX7 is a somewhat predictable affair, given the G-series models released since the Lumix Gx1. Any successor to the GX1 was bound to offer a magnesium body, as well as a display with touch-functionality and Wi-fi. Yet, with a brand new sensor promising even better image quality than before, as well as the headline feature of the tiltable viewfinder and a strong focus and handling and physical operation, there's plenty to interest and intrigue those who may be otherwise tempted by some of the GX7's peers.

Right now the GX7 is Panasonic's strongest competitor to a glut of warmly-received, high-end enthusiast cameras, such as Olympus’s OM-D E-M5 and Fujifilm’s X-E1. While it’s certainly true that much of the appeal of these models lies in their retro styling, the GX7 has many charms of its own that may sway the photographer. 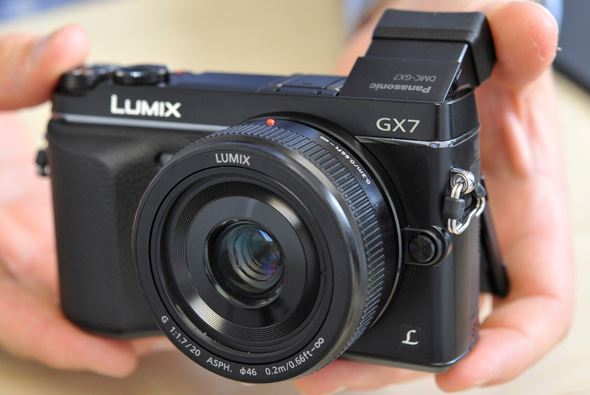 The redesigned grip and abundance of physical controls mean that the GX7 handles in a very different way to previous G-series models, such as the GX1 the camera replaces. This isn’t a camera for smaller-handed users; the grip is deep and large, and really fills the hand. Panasonic has increased the stiffness of the mode dial above it so there’s less chance of it turning accidentally, and on the pre-production sample we handled it was indeed somewhat stiffer than expected. Whether this is a good thing or not, however, will depend on how frequently you’re likely to alternate between its various settings. 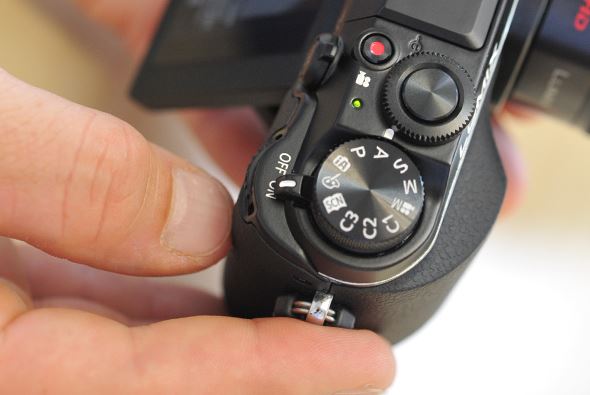 This stiffness is contrasted by a freely-moving dial around the shutter release, which stands to reason given that it’s likely to be operated with just the index finger. When used in conjunction with the rear command dial (which also turns easily) it’s easy to navigate the menus and change different options. While the camera lacks a third, menu-pad dial - as on the Sony NEX-7 - the combination of two dials, many buttons and touchscreen control is very much a balanced one, one that should satisfy a wide range of photographers. 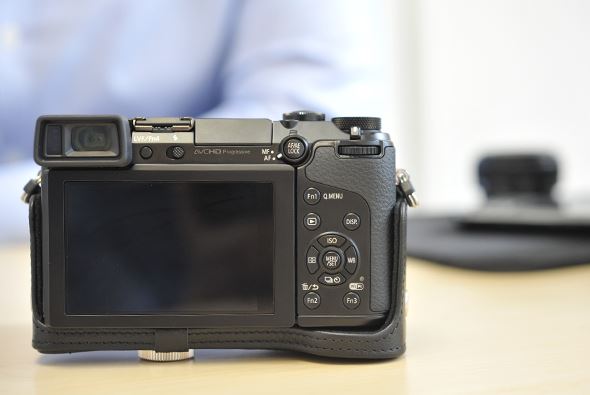 Touchscreen control is something Panasonic has pushed with great enthusiasm in the last few years, having incorporated it on its GX1, G6 and GH3 models among others. With the same specs as the display on the recent GF6, it’s not surprising to discover that it performs to the same standard: colours are pleasing, details are well rendered and the display responds well to even gentle presses. If you’re used to the responsiveness of a smartphone or tablet, it’s unlikely you’ll be dissatisfied with its performance. Focus was confirmed quickly once the display was keyed and the camera exposed the frame immediately afterwards. 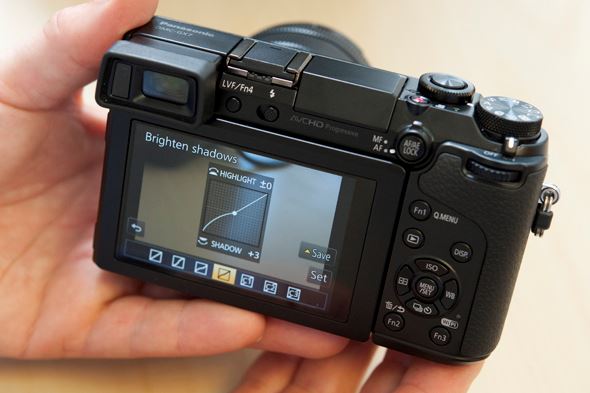 The fact the display is articulated broadens its flexibility when shooting from awkard angles, and it’s pleasing to find that it pulls away from the camera easily. That the electronic viewfinder can be lifted up and out of the way also means that its eyecup will not present an obstruction when shooting down low with the screen extended. True, some will have no doubt preferred a screen with a side hinge as on the GH3, although Panasonic stated that this would have made the body bulkier. 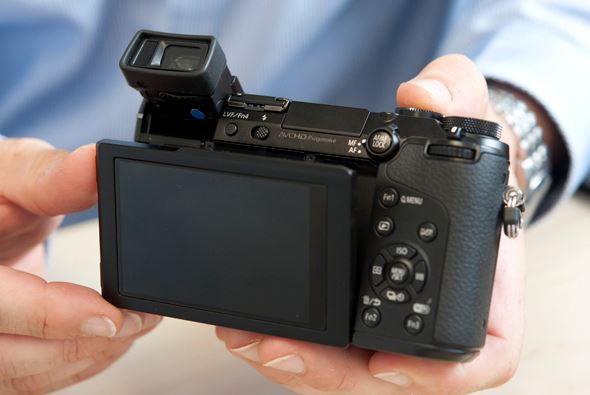 So how about that viewfinder? Well, with 2.76 million dots it’s the highest-resolution viewfinder we’ve seen on such a model to date, and although it pulls away from the top plate without any stiffness it stays firmly in the position to which it's adjusted. With a sensor at its side, the camera automatically switches the feed to the viewfinder from the rear LCD when it senses a face is approaching; on the pre-production model we handled there was a slight delay as this happened, although this may well be shorter on full production models. In terms of of it's appearance it scores many points: it showed high contrast and very good detail, and all menu and exposure information was clearly displayed. 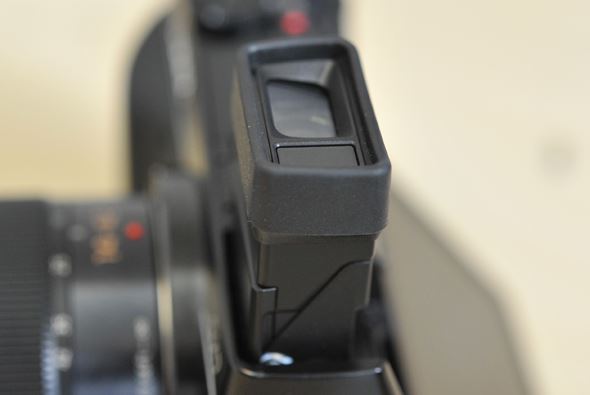 Manual focus peaking has become something of a desirable feature for such CSCs, no doubt in large part due to the plethora of legacy lenses that lack AF capabilities - so its inclusion here is most welcome. It’s nice to see that Panasonic hasn’t thrown this in as a mere afterthought; the user can set the system to detect either high or low levels of contrast, and can customise the colour of the outline to show more clearly against a particular subject. The magnification stretches up to 10x with a picture-in-picture view and thanks to the display’s high resolution it’s easy to see when subjects are coming into focus for utmost precision. While the Panasonic GX7 isn't the first camera to sport this level of control over this feature, it’s nice to see this kind of attention being paid here. 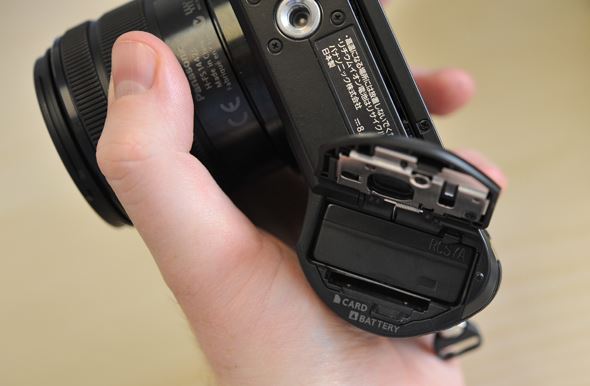 The camera accepts SD, SDHC and SDXC memory cards, and includes support for the UHS-1 speed class. These are inserted into the base of the camera next to the battery, which may bother some who intend to use the camera on a tripod, although Panasonic hinted this may be down to the position of the NFC chip inside the grip.

Overall, we reckon the Panasonic GX7 is a fine contribution to an expanding market, and without question something that will interest both seasoned photographers and the less experienced looking to upgrade from an existing CSC or compact camera. With the benefit of sensor-based image stabilisation and two tiltable displays, Panasonic clearly intends this to be flexible enough to suit every photographic task, and with Wi-fi and NFC connectivity as convenient as possible with regards to the sharing of images. Until we test a full production sample we won't be able to know exactly how well the camera performs in all its areas, but first signs are certainly encouraging.