The Pentax K-3 sits above the K5-II and K5-IIs models announced last year, and arrives with the highest resolution sensor we've seen yet from a Pentax DSLR.

The 24MP (23.35MP effective) APS-C CMOS sensor eschews an anti-aliasing filter, much like the Pentax K5-IIs, although something which differentiates the two models is an AA Filter Simulator on the K-3. This uses the camera's Shake Reduction feature to apply microscopic vibrations during exposure, which is said to have the same effect as a physical anti-aliasing filter.

Cleverly, this option can be deactivated by the user when they feel the scene does not require it, and its strength can also be adjusted over two levels. The Shake Reduction feature also promises to compensate for up to four EV stops of shutter speed, while also providing the previously-seen auto-level compensation feature and image-composition fine adjustment.

This sensor works in conjunction with a new PRIME III processing engine, which promises high-quality image processing and noise reduction, while also allowing a respectable maximum sensitivity of ISO 51,200. 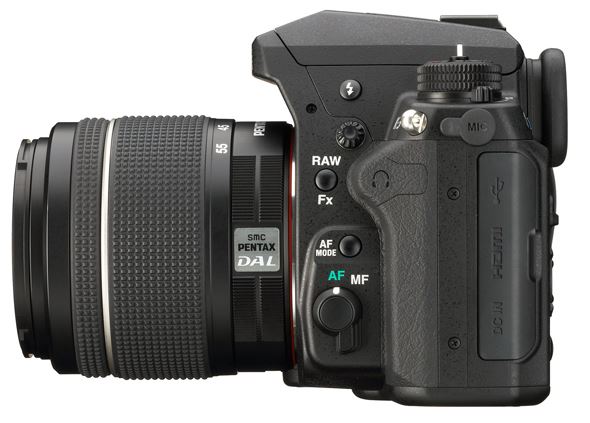 The Pentax K-3 also debuts a SAFOX 11 focusing module, which comprises 27 AF points. 25 of these points are of the "cross" type which makes them sensitive to both horizontal and vertical details, while the working range of -3EV to +18EV makes it just as flexible on paper as the SAFOX X system employed by the K5-IIs. The camera's metering system, meanwhile, has also changed from previous models, with a new 86,000-pixel RGB metering sensor at its heart.

The K-3 sees a magnesium alloy body around a stainless steel chassis, and while it's not the first DSLR from the company to be sealed against water and dust incursion, it does appear to offer the best protection yet with 92 individual seals. And, to ensure no water can get in while shooting, the K-3 will be bundled with the company's Water Resistant (WR) lenses as default kit options.

Around the back, the Pentax K-3 boasts a newly-developed 3.2in LCD screen with 1.037 million dots, as well as anti-scratch and anti-reflection coatings. The optics of the viewfinder are also said to have been redesigned for the new camera, while its glass prism sees new coatings improving reflections in order to produce a brighter viewfinder image. As with Pentax's other current DSLRs, the viewfinder is also noteworthy for offering a field of view of approximately 100% along with a 0.95x magnification.

In its continuous shooting mode, the Pentax K-3 can capture a burst of images at 8.3fps for up to 60 JPEG images or, alternatively, 23 Raw files. Full HD video is available at a choice of frame rates up to 60fps, with a port on the camera's side for stereo microphones and also both USB 3.0 and HDMI ports for image and video output. USB 3.0 ports are only slowly making their way onto DSLRs (the first was on Nikon's D800 and D800e announced last year) so it's welcome to see another model add this to its feature set.

Other notable features include a top shutter speed of 1/8000sec and a flash sync port, as well as a dual SD card slot which supports UHS-1 cards. The camera is also set to be compatible with FluCards which will allow it to be controlled wirelessly with smartphones and tablets via an app (the camera itself lacks Wi-fi). 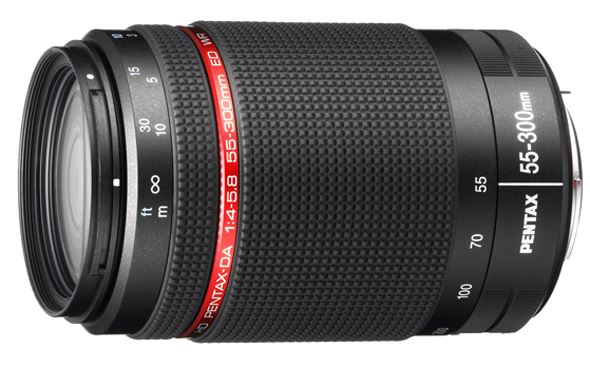 Pentax has also announced a new lens alongside the K-3, the HD Pentax-DA 55-300mm f/4-5.8ED WR. This boasts Pentax's multi-layered HD coating for better light transmission as well as a weather-resistant construction to match the new camera. It also sees a Super Protect coating on its front element to keep marks and moisture at bay. 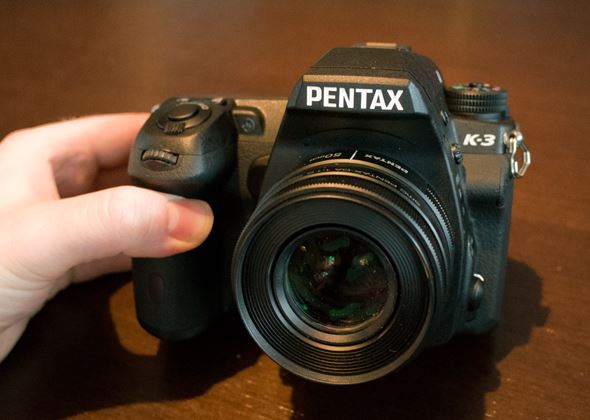 One of the first things which strikes you is the camera's display. While its 3.2in dimensions don't sound particularly exciting next to the more common 3in standard, on such a small body this difference is easily noticed. The display bears a 3:2 aspect ratio and tilting the camera around shows it to have a fine viewing angle, although our brief hands-on didn't allows us to test this in more extreme conditions.

The graphic user interface appears to be largely similar to previous models too, with the exception of new features such as the AA Filter Simulator, which has 'Type 1' and 'Type 2' options in addition to an 'Off' setting underneath these. 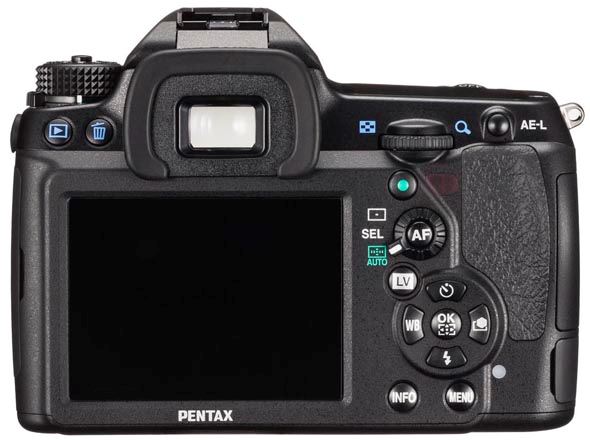 Aside from this, at first glance not much appears to have changed at the back of the camera from previous models, although a side-by-side comparison with the K5-II shows Pentax to have made a number of revisions. The Delete button in the top left hand corner is now a metering control which has been twinned with a delete function, while the lever to select the focusing pattern has now been replaced by one for changing between image and video modes. Further changes include a new button for AF point selection and a shifting of the AEL button, as well as a permanent reminder on the rear of there being two card slots around the side.

Something users will no doubt appreciate is the camera's general responsiveness. The camera springs to life in excellent time once the power collar around the front is flicked, while captured images can have their details checked quickly with the speedy zoom function. Each click of the command dials at the front and rear of the camera also adjusts settings promptly, even when turned quickly where many other cameras lose sensitivity. The camera's focusing system also appeared to lock on to subjects well too, even in dimly lit conditions.

We look forward to getting our hands on a full production sample!