Designed for those new to the DSLR market who want the opportunity to take high quality images without having to spend hours studying the instruction manual, the Pentax K-m digital SLR offers a 10 megapixel sensor in a compact and lightweight body, and building on the Pentax-original Auto Picture Mode, the Pentax K-m uses further upgraded technology to set the optimal settings for a particular scene by automatically detecting its type or subject. Additionally the Pentax K-m features an in-built Shake-Reduction mechanism to deliver blur-free shots in every situation, including when shooting in the dark or when using extended exposures. 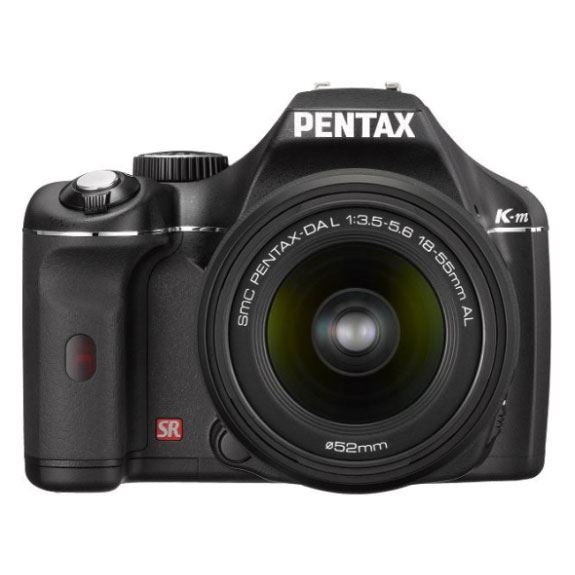 The Pentax K-m digital SLR has a freshly designed user-control system which positions the majority of controls on the camera's grip side, so that it feels more natural to first-time DSLR users and a comprehensive 'Help' function explains each function on the 2.7" LCD screen to those unfamiliar with digital SLR technology.

Although in fact extremely sturdy, the Pentax K-m digital SLR is a lightweight and compact camera that contains top-level technology. A large CCD sensor of 23.5mm x 15.7mm and the smart PRIME (Pentax Real Image Engine) add up to outstanding results that can be enlarged and edited comfortably. Whilst shooting, the Pentax K-m supports up to 3.5 frames per second in JPEG recording format, great for capturing images of fast-moving subjects, and the 5-point AF system delivers high-precision autofocusing. Not only this, the Pentax Km has a clear and bright viewfinder with approximately 96% field-of-view and 0.85x magnification.

Pentax have also released two new lenses designed to deliver the same quality as users have come to expect from Pentax, whilst being lighter and more compact. The lenses are the Pentax-DA L 18-55mm f3.5-5.6AL Lens and the Pentax-DA L 50-200mm f4-5.6ED Lens.

The suggested RRP from Pentax for the Pentax K-m DSLR is £399 including the 18-55mm DA-L lens or £499 for a two lens kit which includes both new lenses, the 18-55mm and 50-200mm DA-L lenses. Coinciding with the launch of the Pentax K-m, Pentax UK has announced a £30 cashback offer (starting immediately), which brings the prices of these kits down to £369 and £469 respectively.