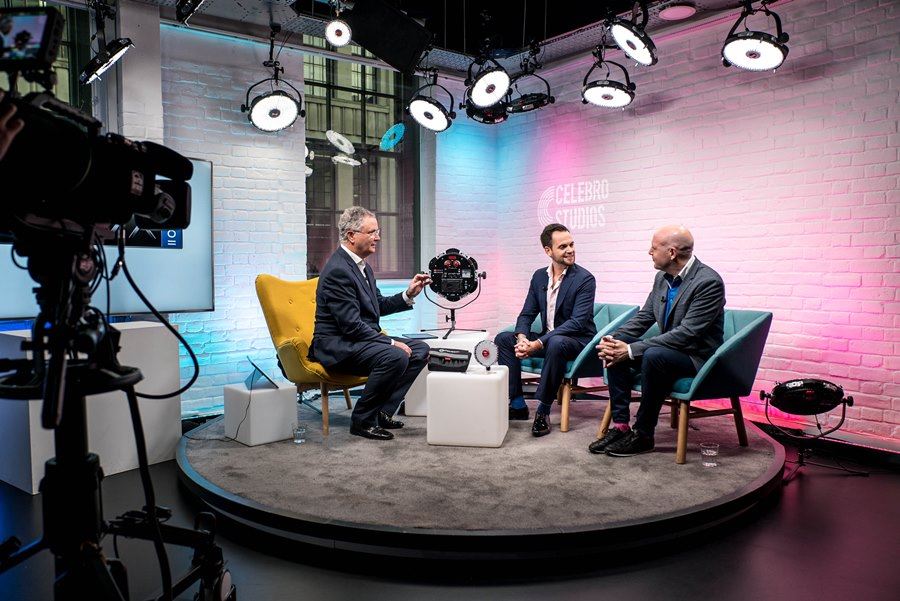 Rotolight launched the Anova PRO 2 LED light at Celebro Studios — London’s first fully 4K, IP-based television studio. This cutting-edge facility is already home to a formidable Anova PRO set-up, and I have a feeling its successor is going to prove just as popular.

From what I’ve seen so far, this could well be the LED light of choice for those photographers who create films and for those filmmakers who take photographs. And, as we witness an ever-increasing convergence between the two disciplines, the Anova PRO 2 is certainly relevant in the current imaging climate. 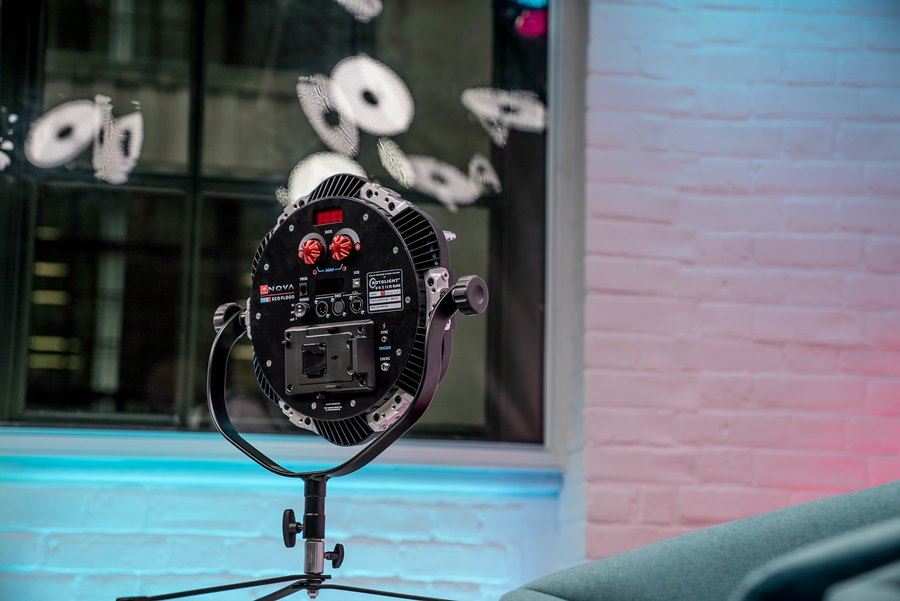 The Anova PRO 2’s key feature is its ability to offer both HSS flash and continuous lighting. Whether you’re filmmaking and suddenly need to shoot some stills or vice versa, the Anova PRO 2 has you covered. Not only is managing just one type of light going to make life a lot easier, it’s both more cost effective and kinder on your back, when lugging kit around.

In addition, the Anova PRO 2 is one of the brightest LED lights in its class; pushing out 10,700 lux at 3ft. Compare that to the output of its predecessor (6280 lux) and that’s a considerable, 70% increase in power output. The updated HSS flash (1/8000th) comes with a 250% performance boost and hails zero recycle time.

Cameras are getting quicker and quicker, and this light is one of the few that’ll actually be able to keep up. Couple this with its bi-colour LED fixture, that delivers accurate colour reproduction (CRI>96, TLCI 91), and you’ve got a flexible tool that can be moulded to work in various shooting environments — regardless of whether you’re working in continuous or HSS flash modes. 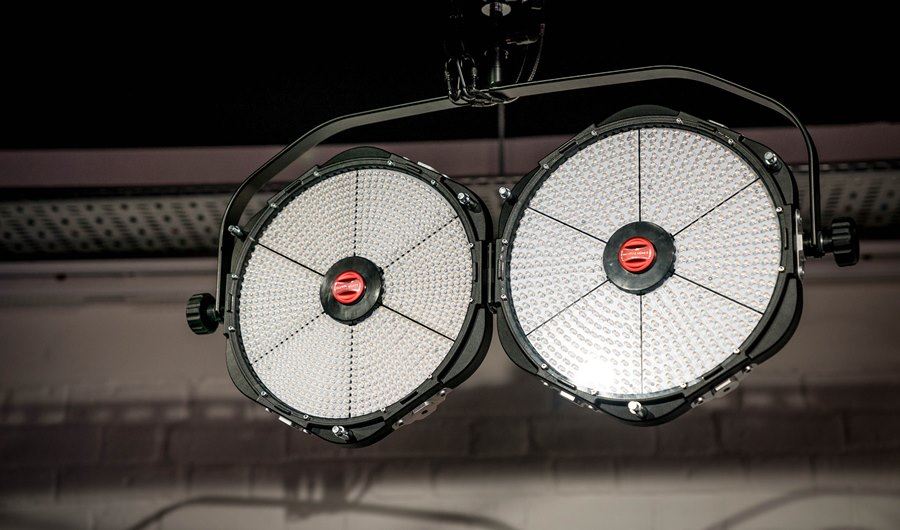 The Anova PRO 2 (left), looks identical to its predecessor (right).

Look at the front of the Anova PRO 2, alongside its predecessor, and you’ll be hard-pressed to tell them apart. The former is almost identical in size to its predecessor and is of a similarly light weight. So, if you already own additional accessories for the Anova PRO — such as the double yolk or barn doors — they’re compatible with the PRO 2.

With no corners, you might think that a rounded 1x1 light would have fewer LEDs than a square one… And yet, as you’ll find below, the Anova PRO 2’s output quashes any such reservations. 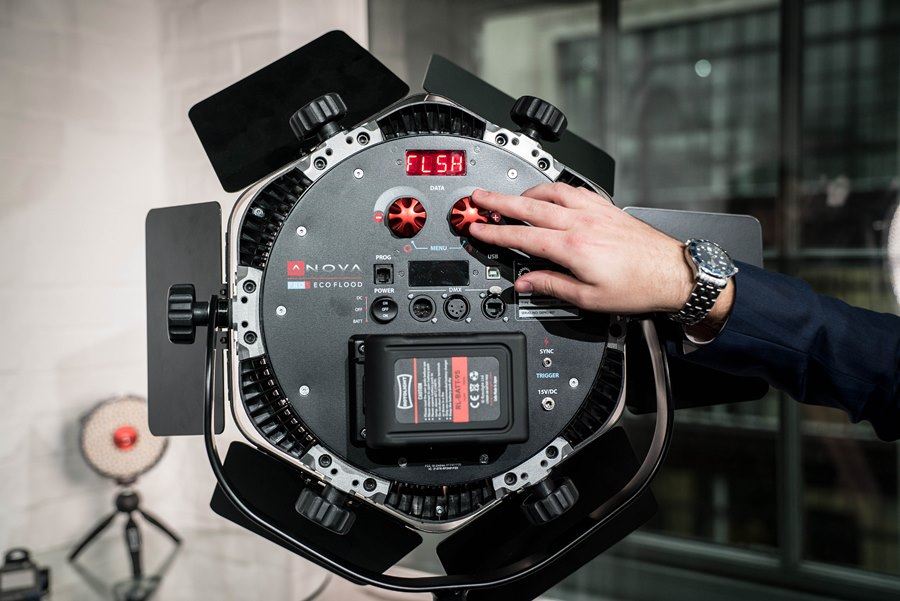 But, surely this increased power output must come at the cost of increased power consumption? It would appear not… Rotolight claims that the Anova PRO 2 provides the best power to consumption ratio in the industry — something that’s hard to argue with, since it only draws a mere 72W of power.

As such, running costs are going to be significantly reduced, if you’re decking out a whole television studio with these lights. But, this doesn’t just benefit big studios… The Anova PRO 2 can run via the widely adopted V-Lock battery, and fewer batteries mean more bang for your buck!

For television and film production, it’s uncommon for an LED light, at this sort of price point, to come with built-in pre-canned lighting effects. And, what Rotolight is referring to as CineSFX is no gimmick; the pre-sets have been designed in conjunction with visual effects veteran, Stefan Lange, whose résumé includes Batman (1989), Mission: Impossible and Skyfall. In addition, effects (including lightening, police lights and paparazzi camera flashes) have fully customisable parameters, so you can tweak as desired. 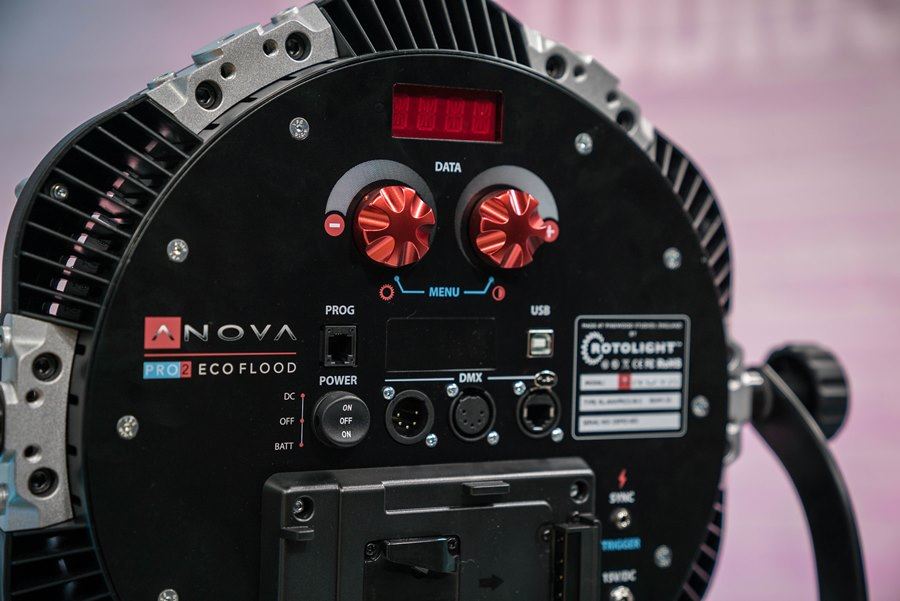 As well as the classic 5-pin DMX connections on the back of the light, the Anova PRO 2 features an RJ45 DMX connection. So — when it comes to studio set-ups — fewer cables are needed. This means there’s no need to wire a lighting grid in sequence (DMX cable into one light, DMX cable out to the next light). Instead, lights can be networked via switchers, which means if one light breaks, others will still function.

Wireless control of HHS flash, brightness, temperature and CineSFX pre-sets are all possible with an Elinchrom Skyport Transmitter.

Rotolight has teamed up with Elinchrom to integrate a Skyport receiver within the Anova Pro 2, letting you wirelessly trigger HSS flash from up to 200m. But, what’s more interesting, is that you can wirelessly control the colour temperature and brightness of the Anova PRO 2, via the Skyport Transmitter (sold separately) in both continuous and flash modes.

The Skyport Transmitter can also control the CineSFX parameters, changing the rate of strobe, fire and lighting — you can even trigger a gun flash at the touch of a button! I always considered HSS triggers as a tool for photographers only, but this is a fantastic feature to have at your fingertips and something I (as a videographer) could really do with in my life.

The Anova PRO 2 comes with the integrated DMX and V-lock battery plate, built-in wireless Elinchrom receiver, and four-piece filter kit as standard. It is expected to start shipping mid-January 2018.