Samsung has unveiled its latest addition to its growing Compact System Camera family, the Galaxy NX. 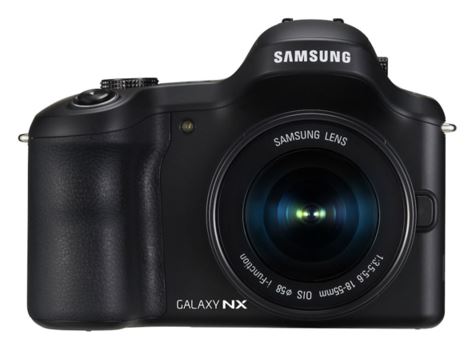 The Galaxy NX, whose arrival finally confirms the many internet rumours which surfaced earlier in the month, carries the honour of being the first Compact System Camera to offer 3G/4G connectivity in addition to Wi-fi. It also offers NFC connectivity for compatibility with other NFC-enabled devices.

As its name suggests, the camera blends the company’s Galaxy and NX lines to deliver an interchangeable-lens model running the latest Android 4.2 Jelly Bean operating system. It becomes only the second Compact System Camera to incorporate an Android OS following the Polaroid iM1836 announced back in January. 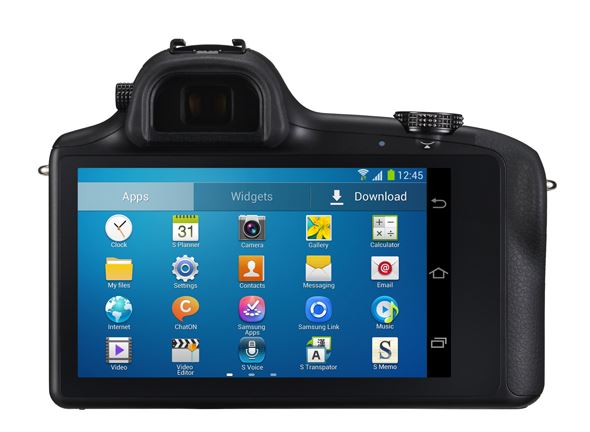 Driving the camera is a 1.6GHz Quad-Core processor, with images dealt with by the DRIMe IV imaging processor. With the same NX mount as Samsung’s existing NX300 and NX2000 CSCs, the camera can accept the 13 lenses released so far, including the new NX 10mm f/3.5 fisheye lens announced last week. 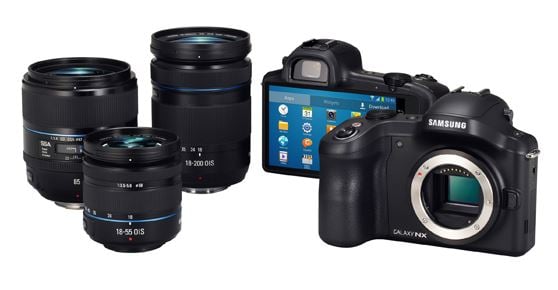 The Samsung Galaxy NX incorporates a 20.3MP APS-C CMOS sensor which offers a broad ISO range of ISO 100-25,600. It's capable of full HD video recording at 30fps and all the enthusiast-level control we'd expect from such a model, such as full PASM exposure controls and Raw shooting.

One of the more impressive aspects of the camera’s spec sheet is its capacitive touchscreen display on the rear. It presents its details with 921k dots and at 4.8 inches it's by far the largest we’ve seen on a Compact System Camera to date. 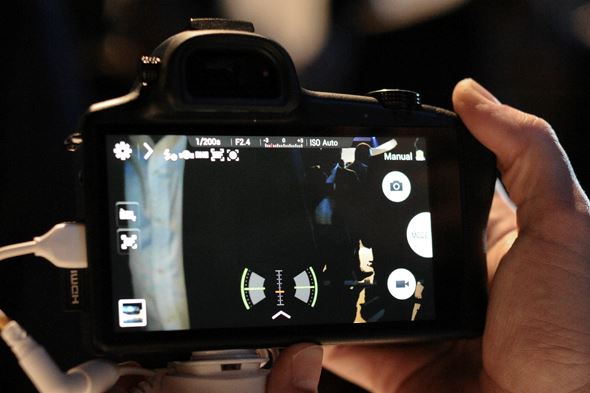 The camera also includes an SVGA electronic viewfinder with diopter control, as well as the same kind of electronic leveling function (above) which has featured on many other recent compacts, DSLRs and Compact System Cameras.

On the top-plate, meanwhile, Samsung has found space for a small pop-up flash which springs up when a button to its side is pressed, although those requiring more power will also welcome the futher inclusion of a hotshoe, as this can be used to mount external flashguns. 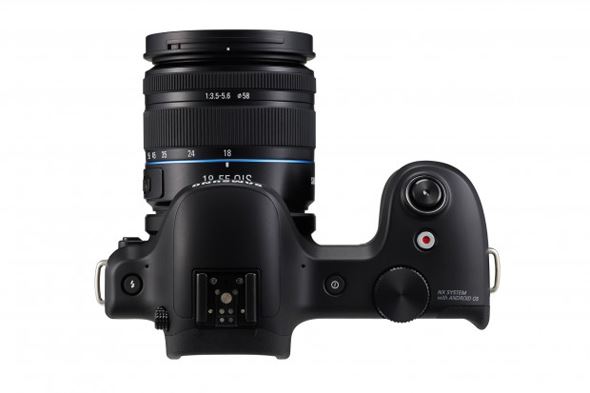 With regards to focusing, the camera boasts an Advanced Hybrid Autofocus system which combines 105 phase-detect points built into the sensor with 247 further points which operate on the contrast-detect principle common to all compact cameras.

The Samsung Galaxy NX can be programmed to fire a continuous burst of images at 8.6fps, while other features of note include built-in GPS, a multiple exposure option and even an intervalometer (below) for time-lapse shooting. 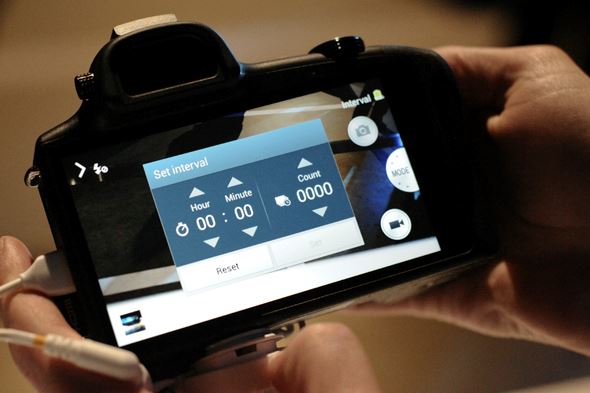 We had a hands-on with a pre-production sample of the new camera at the official launch event to get a better idea of its handling and operation.

The camera started up a little slowly, although as it wasn’t running final firmware it’s entirely possible this will be improved on full-production samples. It was nice to discover the electronic viewfinder presenting a pleasingly colourful and detailed view of the scene, and it was surprising how free of noise it was given the darkened conditions in which it was used. 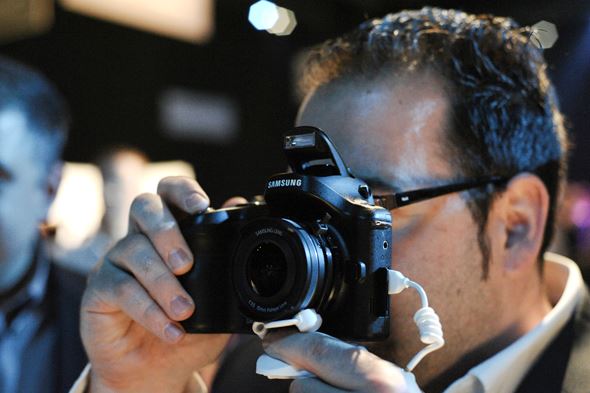 Thanks to its substantial grip the camera handles excellently, which makes it an ideal partner for heavier lenses. It differentiates itself from the majority of similar models by having very few physical controls around its body, with the majority of operation taking place through the touchscreen which dominates the rear.  Given that it shares the same specifications as the display on the Samsung Galaxy Camera, it comes as little surprise that it's just as responsive.

With the new command dial on the top plate options can be cycled through very quickly; indeed, some may find this dial to be a little too responsive, given that it only requires a short turn for options to whizz past on screen. This dial also has a neat feature whereby pushing it forward until it clicks selects an option on screen, something we've seen previously on other models. 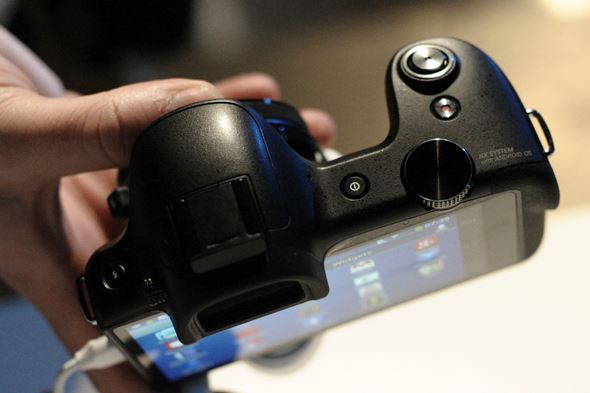 Focus was acquired quickly and the camera appeared to show no lagging once the shutter release button on the top plate had been pressed. This, together with its 8.6fps burst option, makes it seem as though the camera may be suited well for more demanding action photography. 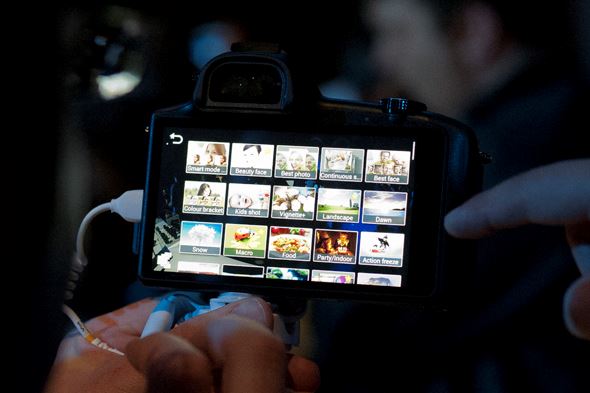