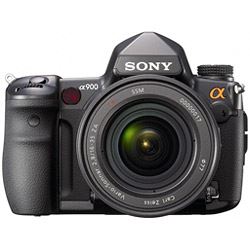 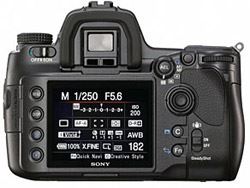 Sony has joined the elite group of manufacturer’s to launch a digital SLR before Photokina with the arrival of the Sony Alpha a900. The latest in Sony’s DSLR line-up boasts an impressive list of specifications and is being marketed as the “world’s first full-frame 24.6 megapixel DSLR”. So what’s good about this product?

The Sony Alpha a900 digital SLR gives Konica Minolta users a full frame option for the very first time and incorporates many of the features, menus and controls of the successful Alpha a700. Of particular note on the feature list are a fantastic 100% coverage (approx.) viewfinder, sensor-shift image stabilisation and a 3” high-resolution LCD screen.

Being the latest major player to hit the DSLR scene, Sony first previewed the prototype of this camera almost 18 months ago, heightening the excitement over what is Sony’s first high-end DSLR and silencing the critics who questioned Sony’s ability when they took over Konica Minolta’s assets not so long ago. With the announcement of a 35mm full-frame sensor in January of this year, it has since been a bated-breath wait for the release of the finished product.

In contrast to both Canon and Nikon’s tendency to alter and improve upon their user interface, custom functions and feature set with each new DSLR, Sony have stuck to the adage “if it ain’t broke, don’t fix it” and the layout of the Sony a900 is barely distinguishable from that of the Sony Alpha a700. However, the Sony Alpha a900 digital SLR camera differs from the Sony Alpha a700 in several other noticeable ways. The Sony a900’s Dual Bionz processors double the processing power of the a700, which offers only one. The camera’s 100% viewfinder coverage is an increase on the 95% of the previous model and the Sony Alpha a900 features a new 9 point AF with 10 assist points for Wide AF mode. In addition, the Sony Alpha a900 offers improved noise reduction, improved D-Range Optimiser, an intelligent Preview Mode and a top LCD information panel. The Sony Alpha a900 digital SLR also features three custom modes on the mode dial (replacing the a700’s scene modes) and an increased pixel pitch as a result of improvements in sensor design.

The Sony Alpha a900 is aimed at serious photographers wishing to expand on their creative capability. The full-frame 24.6 megapixel Exmor CMOS sensor enables you to produce fantastically detailed, low-noise images with a wide dynamic range, whilst the Bionz processor delivers a sharp and fast response. Enhanced SteadyShot Inside offers up to 4.0 steps anti-shake performance with all compatible Alpha lenses, furthering the potential of handheld shooting – the Sony Alpha a900 is the first full-frame camera to feature SteadyShot Inside.

As Sony’s first professional DSLR, interest in this camera is building by the day. You can find a full feature list and further details on the Wex Photographic Sony Alpha a900 page.