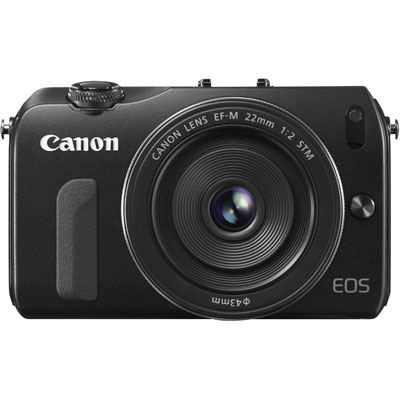 This morning Canon have finally jumped into the Compact System Camera (CSC) game with the launch of a brand new interchangeable lens camera: the small and simple EOS M.

I’ll be at Canon HQ later this morning spending some time talking to Canon and having a play with the EOS M, so keep checking back here throughout the day for updates. I’d like to encourage you to add any questions you have about the new camera in the comments below or shoot them across to me via Twitter, Facebook or Google+ andI’ll do my best to get them answered for you!

In the meantime, here's some more detail about Canon's first mirrorless camera...

7am: an overview & recap on last week's hands-on preview

One of the first key things to note about the M is in the name and the inclusion of EOS indicates that this camera system is going to be an extension of the much-loved EOS brand. This is most obviously demonstrated by the EOS M’s compatibility with the full range of over 70 EF and EF-S lenses via the EF-M Mount Adapter, which opens up a huge range of creative opportunities.

I was lucky enough to get a hands-on preview of the camera last week and was able to have a quick play in advance of the camera’s launch in the top-secret confines of the Canon offices. The first thing many people will comment on is the ‘compact camera’ style appearance, despite some Canon shooters hoping and praying they’d go down the retro route. Canon have developed the style and function of the EOS M on the IXUS line, making it a comfortable next step for compact users wanting to get more out of their photography. Although it is a compact and lightweight little camera (weighing in at 265g), it did feel surprisingly solid in my hand and not as much like a compact camera as I would have expected. 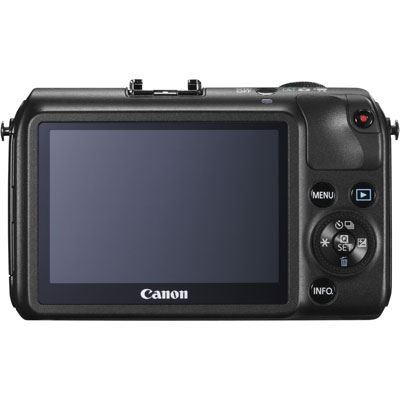 Although it boasts the image quality of the 650D, its style is more IXUS than DSLR

The look of a camera is important (and in any case, a matter of personal opinion) but retro-styling is useless if what’s under the hood isn’t up to scratch. I was really very impressed with the image quality I saw when I had some hands-on time with the EOS M. The 22mm Pancake Lens combo was particularly nice and I think it will prove to be a popular choice. At f/2 the images I was seeing were sharp with crisp colour and very nice depth of field with smooth bokeh.

Unfortunately, the model I was using last week and the one I’ll be playing with later today are pre-production samples, which as per usual means I can’t share any of the results with you here just yet. All in good time folks! You’ll have to trust me when I say that after an indication that this camera was catered more towards the entry-level end of the spectrum, I did find the quality and dynamic range of the images pretty impressive indeed. I'm looking forward to having a bit more time with the EOS M, getting outside the confines of an office with it and attaching a few EF lenses to get a feel for what shooting with larger, heavier glass will be like with this small camera.

I'll be heading to Canon HQ shortly, so keep checking back for more photos & updates... 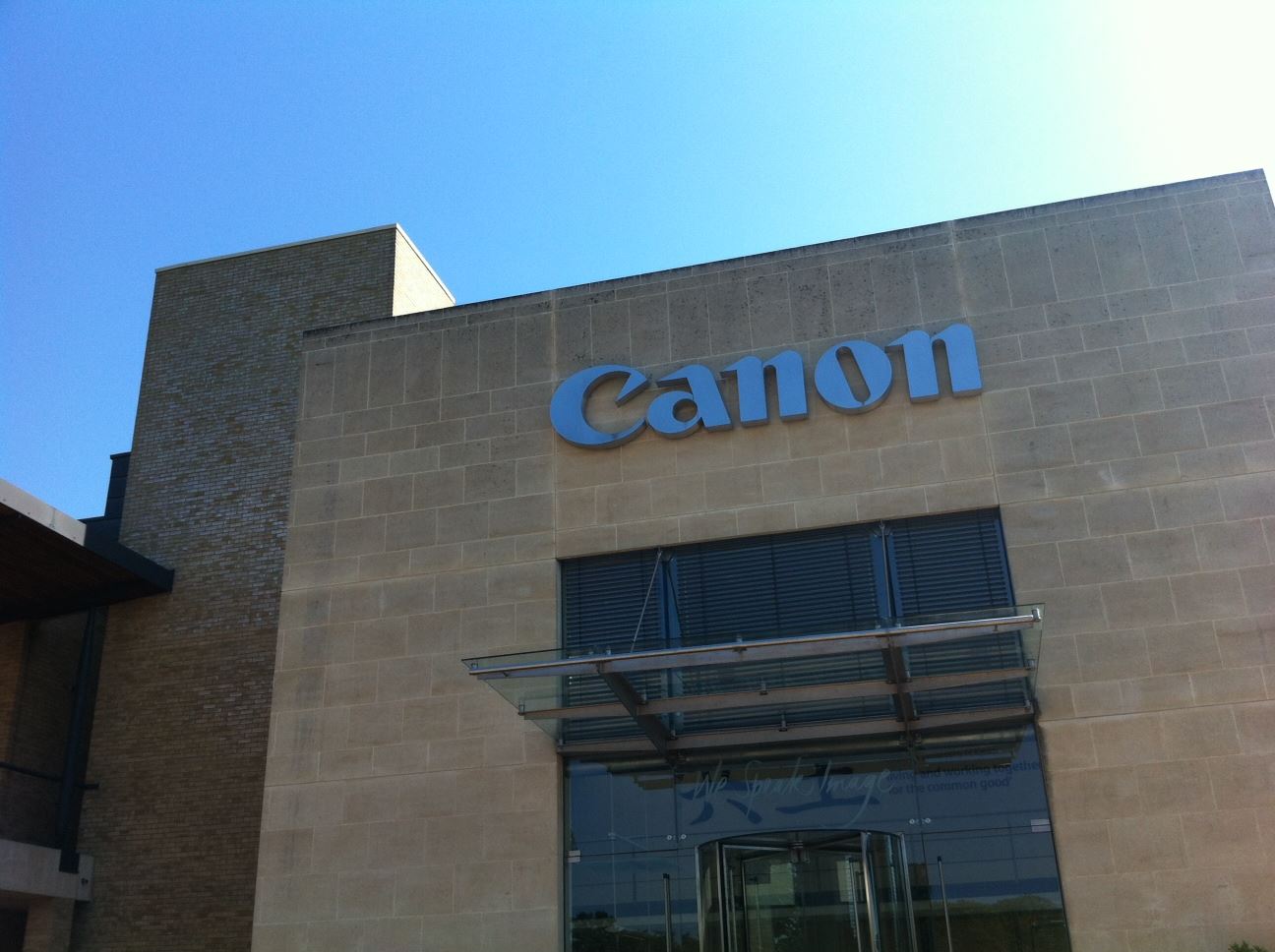 Thanks for all your questions and comments so far, I'll work my way through as many of them as I can today now that I've arrived here at Canon. I'm going to start off by addressing one point that's been brought up quite a few times already...

This was something I was hoping to see in Canon’s debut CSC offering and I think more experienced photographers will also be a little disappointed with this omission. What we need to remember is that the EOS M is a camera designed primarily for the interchangeable lens entry-level crowd and I expect one of the common paths to buying it will be current compact users wanting to develop their photography without the bulk of a DSLR. So it would seem Canon has kept these users in mind who are more familiar with using a rear screen while also balancing out the bulk that an in-built EVF would add - the EOS M is supposed to be a small, simple solution after all.

So if you’re looking at the lack of EVF on the EOS M and thinking it’s not for you, then perhaps it isn’t. I’ve got my fingers crossed that in the not-too-distant future we’ll see an enthusiast’s version of the EOS M camera, equipped with viewfinder and more manual control at our fingertips OR an external EVF for the hotshoe at some point even sooner.

Really couldn't resist getting the M-Mount adapter and 800mm straight on to the EOS M. To answer a question from @paul13walnut5 about whether there is a crop factor with the adapter or not - no, there isn't. Auto Focus also works absolutely fine with the adapter and EF/EF-S lenses attached, the only effect is that Servo AF will slow down slightly but this will only really be a concern if you need it for high speed shooting. 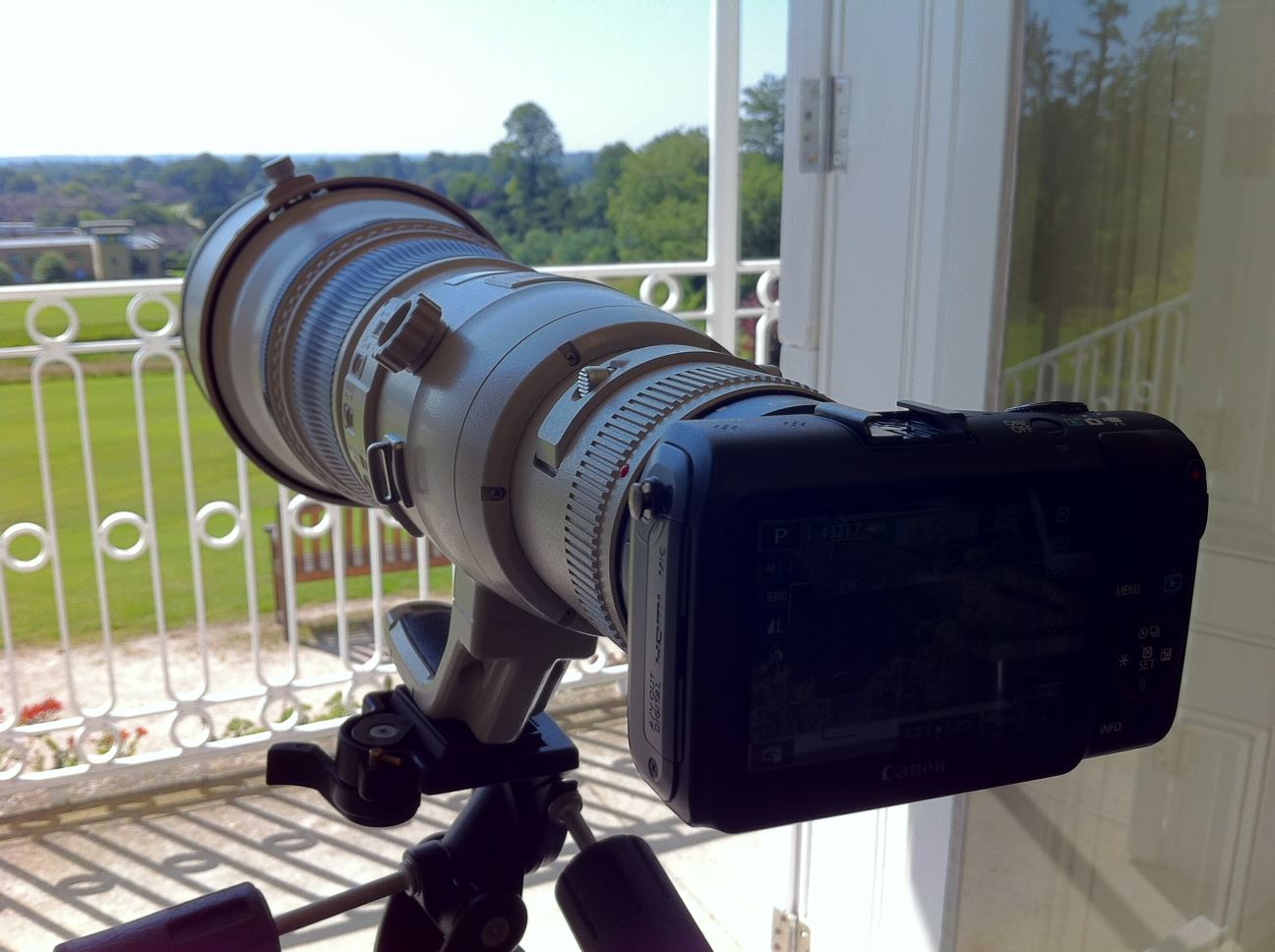 Canon EOS M with M-Mount Adapter and the Canon 800mm

There's some great questions coming in so I'll keep updating as many as I can here:

@Steve_Reeves_ asked us about the shutter response and how the screen compares to the 60D. I'm told the shutter lag is 0.048 seconds, and it can be triggered either by the shutter button (no surprises there) or by tapping the rear screen, which will also auto focus and expose for the point you selected. In comparison to the 60D, the screen on the EOS M has the same resolution but now with touch sensitive technology.

One of our Facebook followers asked whether the EOS M has "a Bulb mode for night-time use and is there any means of using a tethered remote release?". The answer to that is yes, it does have a bulb mode and it is compatible with the Canon RC-6 remote. 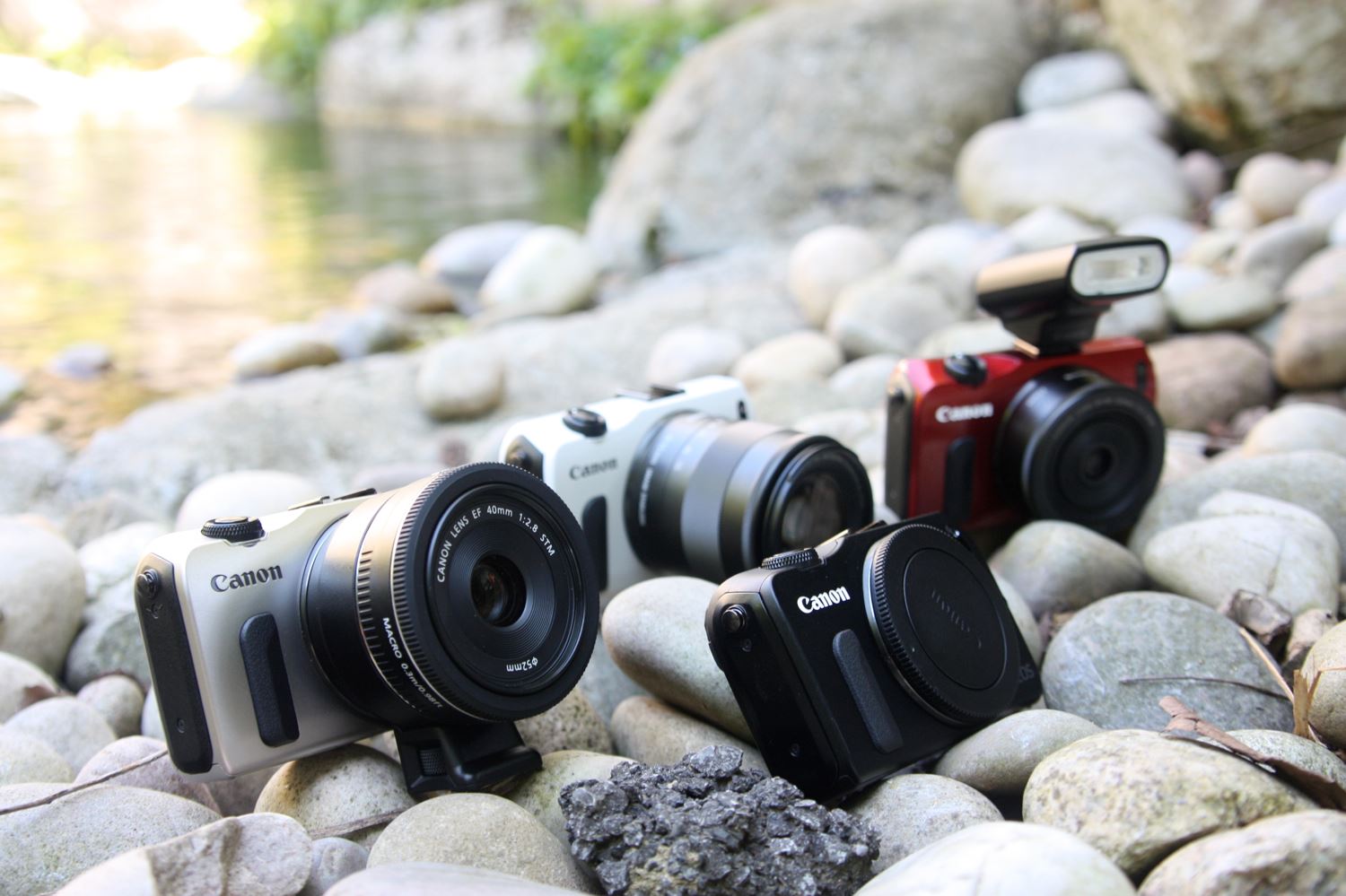 The EOS M in a variety of colours, lens combinations, with adapter & with flash

@AndrewStuart asked us via Twitter: "Is it intuitive enough for street photography? Can you change settings without going through loads of menus and staring at it?". Shooting with the EOS M is more like handling a compact than an SLR so if you're used to shooting with a compact camera then you'll find it intuitive to use. However, if you're wanting to use full manual control an SLR will probably still be better suited to your needs. In saying that, accessing the manual control menu is pretty straightforward and is just a matter of pressing the INFO button on the rear of the camera. For example, if you have the camera set up in Av mode and you want to adjust the aperture, it's as simple as pressing info and then scrolling the click wheel to change it - so it's definitely not a matter of needing to sort through a load of menus.

The jewel in the EOS M’s crown is its 18 megapixel APS-C sized CMOS sensor. Combined with the latest DIGIC 5 processor, it’s set to achieve the same image quality as found in the 650D.  As I mentioned above, the cameras I’ve been shooting with today are early pre-production samples so I can’t share the images I've taken with them in this post, but I can say that they do show excellent detail and sharpness on par with its DSLR counterpart. 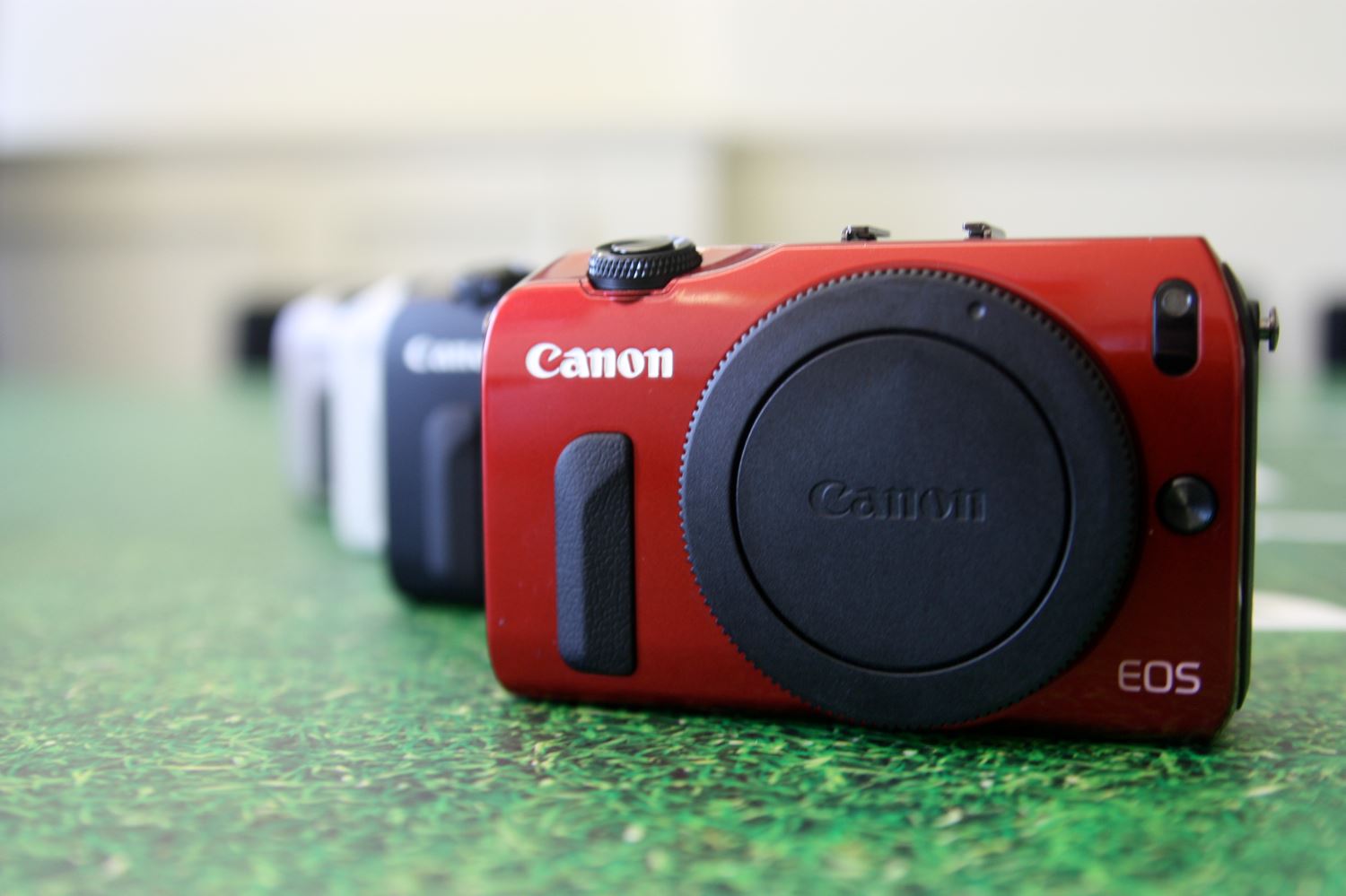 The EOS M is available in Red, Black, Silver & White

On the top of the camera you’ll find three shooting modes: Intelligent Auto, Camera & Movie. Once you’ve selected movie mode, there’s a dedicated stop/start movie button in the rear top right corner of the camera to make things as easy as possible.

Scene Intelligent Auto mode is ideal for people new to photography and will make the tough choices for you by analysing the subject and scene, evaluate colour, brightness, movement and will even detect whether people are in the frame. The EOS M will then pick the most appropriate camera settings to give the best possible results.

As expected, there’s also a range of creative filters to be found, including the ever-popular  Miniature and Toy Camera effects. A neat feature is that you can scroll through the filters with the touchscreen function and see the what the results will look like before taking a photo. 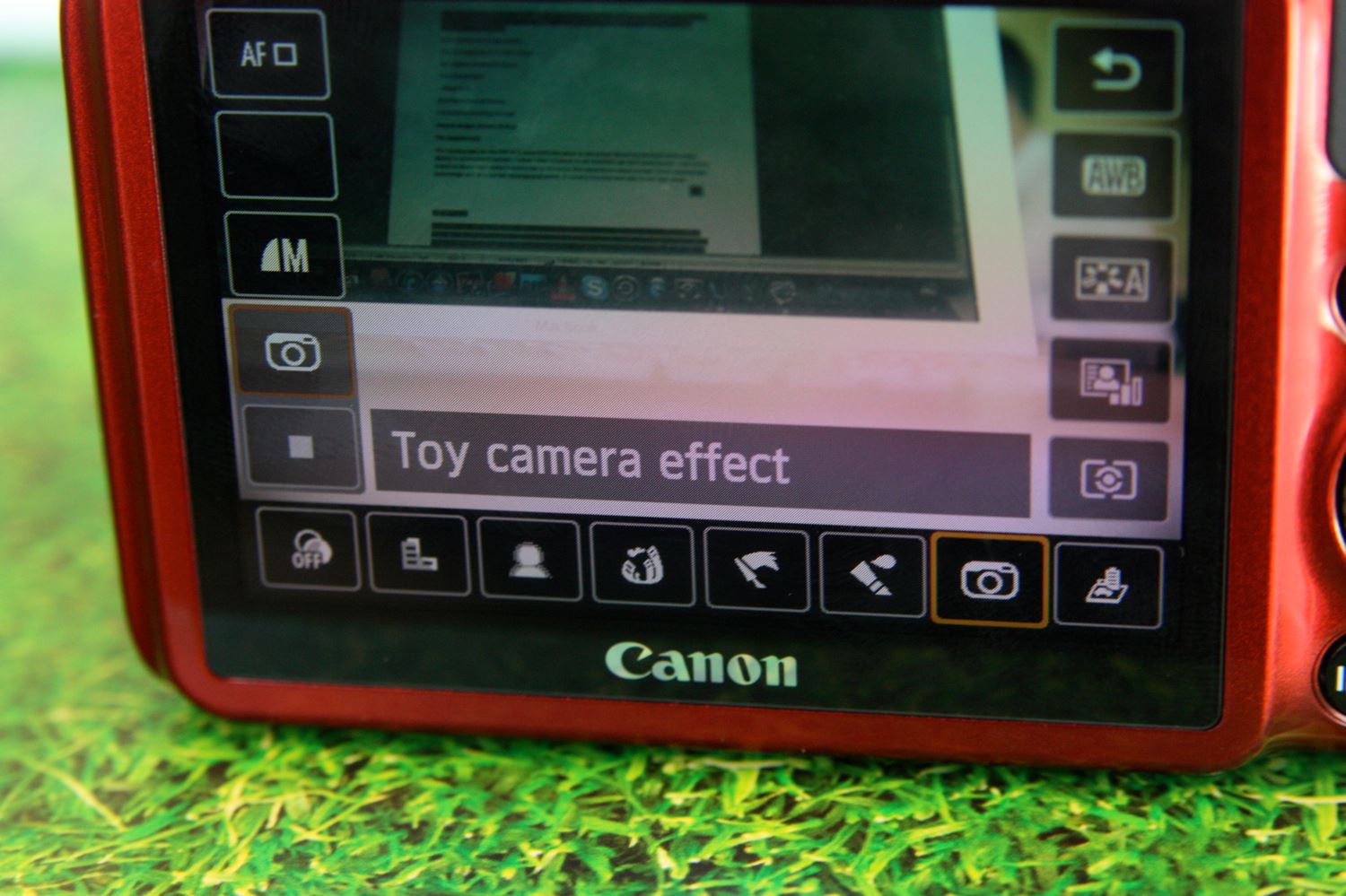 The touch screen on the EOS M is essentially the same as the one found on the Canon 650D, minus the ability to articulate and swivel – this was most likely left off in order to keep it as small and lightweight as possible, which leaves the door open as another potential feature for a more advanced M camera in the future (if there will be one). I haven’t had a chance to use the touch screen 650D before today so this is my first experience using the new Canon touch screen technology too. As a current smartphone owner, it’s pretty intuitive and easy to use right away. The touch sensitive technology is surprisingly fast and reactive. Reviewing images is great. Browsing though the images with the sliding motion and pinching to zoom both work really well. This screen will look familiar to DSLR users, it's where you can adjust all manual controls with the touch of a finger 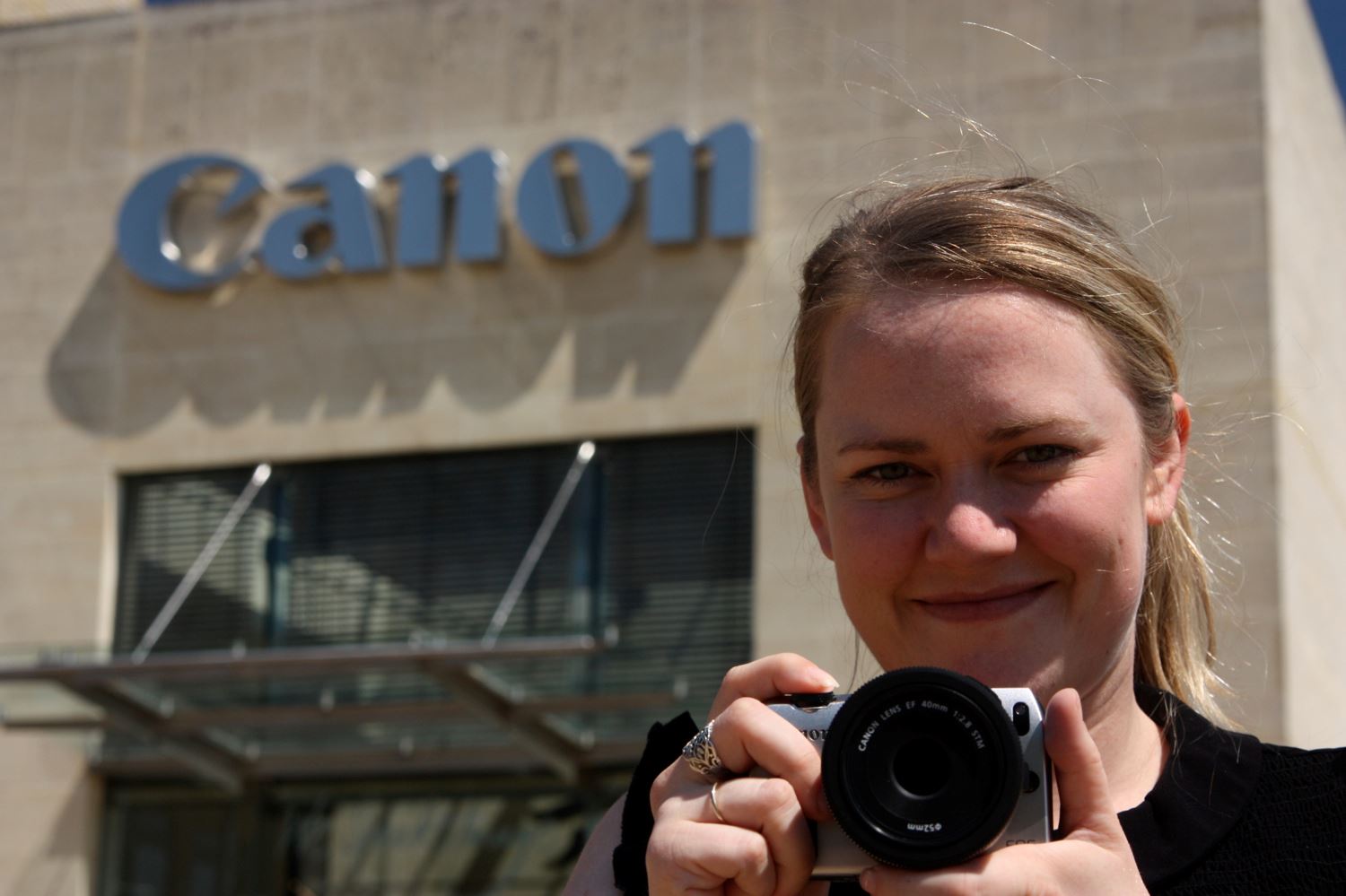 I think the big catch here for existing Canon DSLR users is the APS-C sensor coupled with the ability to use the entire range of EF & EF-S lenses with the EOS M via the adapter. For photographers who need a smaller second camera for everyday use, street shooting or travelling, then having the image quality of a 650D in a body that’s smaller and lighter by approximately 50% AND the flexibility of using all your current lenses and speedlites, means the EOS M is still worth considering in my opinion.

I think the EOS M really straddles a fine line between two groups of photographers: it's an excellent step-up for people with an interest in photography who are craving better image quality and flexibility (in terms of lenses) than what can be achieved with the average compact camera. With it's DSLR-standard image quality and the availability of the M-Mount adapter, it's also calling out to more experienced Canon lens-owning photographers who are craving something smaller and lighter too. The lack of EVF is a big sticking point for many in the latter group of photography enthusiasts though, so hopefully we'll see an external unit or more advanced version of the EOS M announced at some point in the future.

Before I sign off for the day, check out the walk-through videos from Canon below to find out more about the EOS M...