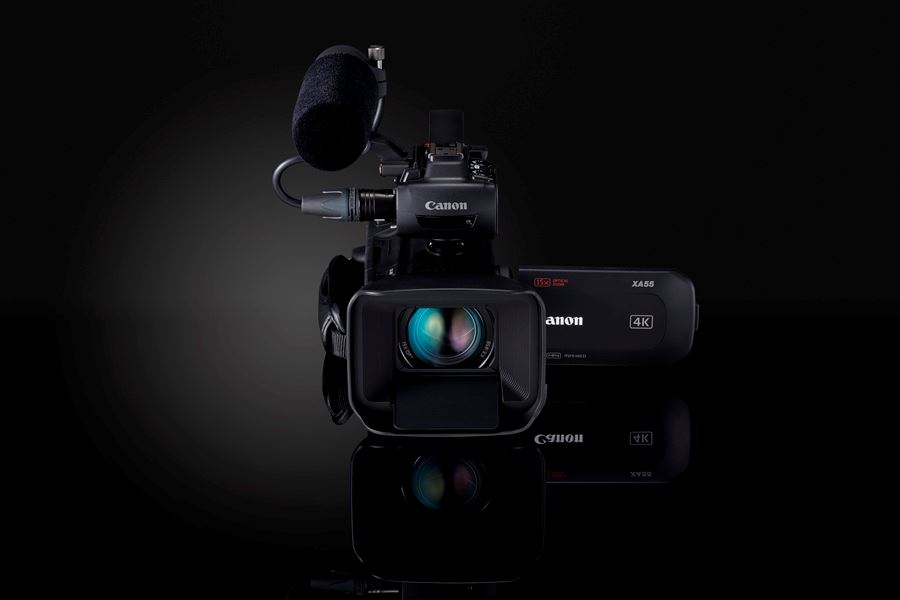 Over the past couple of years, Canon has slowly refreshed its fixed-lens camera offering to include models that are now capable of acquiring 4K footage. Today's announcement ties that newly updated product line together, with the XA40, XA50 and XA55 occupying the entry-to-mid-level market.

This now brings the total number of cameras in Canon’s XF and XA range to 12. It’s worth bearing in mind, however, that this rather large line-up does include the XF305, XF200/205 and XA11/15 – all limited to recording in full HD. I’d expect to see these models left behind as Canon concentrates on pushing these new 4K models. This would make for a much more streamlined offering, consisting of just the XF705, XF400/405, XA50/55 and XA40. This effectively reduces the XF/XA range from 12 to just six.

Specs at a glance…

Those familiar with Canon’s naming conventions (in this category) won’t be surprised to learn that the only difference between the XA50 and the XA55 is the latter’s addition of a 3G-SDI connection. At the heart of both cameras is the same 1-inch CMOS sensor that’s found in their more expensive siblings, and combined with the DIGIC DV6 image processor, they're capable of recording up to UHD 4K at 25fps, 8-bit 4:2:0 at a maximum bitrate of 160Mbps.

When recording in full HD, the XA50/55 oversamples the full 4K sensor to deliver a superior HD image. It can record up to 50fps (there is even an option for 50i), with a maximum bitrate of 45Mbps. Again, it’s limited to recording in compressed 8-bit 4:2:0, but you can output 10-bit 4:2:2 in HD via the SDI output on the XA55 should you want to. You also have options for recording in both XF-AVC and MP4 to the dual SD card slots, where you have the ability to dual record (instant backup) or relay record. 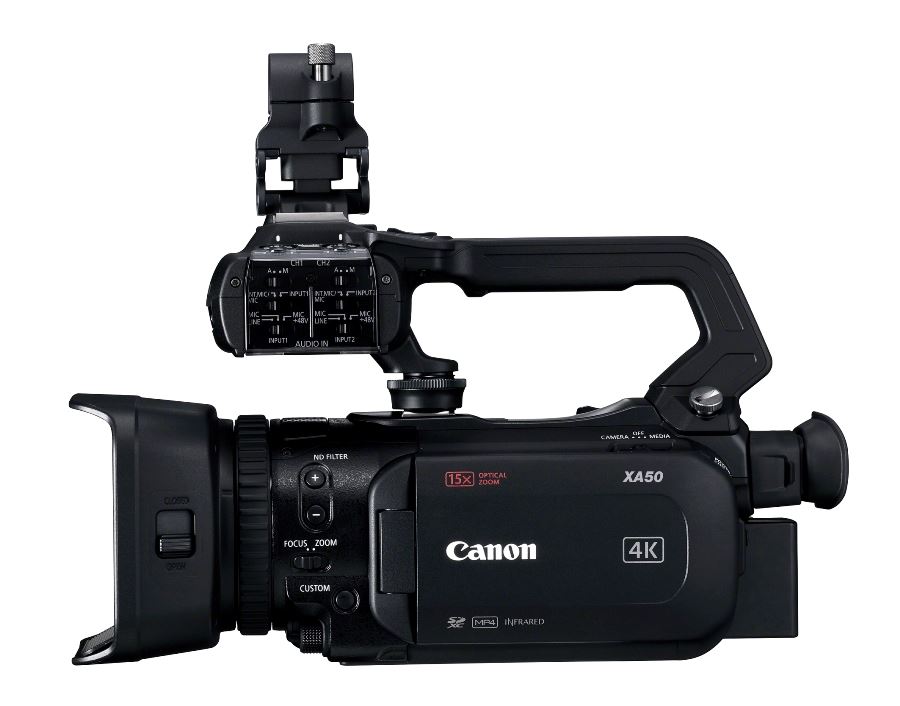 This camera looks to be very similar to that of Canon’s XF400/405 (one step up from this camera). The main differences are that the XA50/55 doesn’t have the ability to record 4K at 50fps, nor does it have the network capabilities for FTP transfer. Everything else, however, looks very similar (if not the same).

The front of the camera houses a 15x f/2.8-f/11 optical zoom lens (equivalent to 25.5mm-382.5mm) and getting smooth handheld shots, even at the longer end, should be relatively easy as it does have in-body stabilisation. There is a single control ring on the lens, for operating both focus and zoom. You can easily cycle between the two functions via a switch next to the ring, which makes operating the switch one-handed very easy. The camera also features Canon’s much praised Dual Pixel AF system, including face detection and tracking.

The body houses everything you’d expect to find on a camera of this kind, such as built-in mechanical ND filters (ND 1/4, 1/16 and 1/64), a pull-out EVF, a zoom rocker, manual aperture control (that can also control shutter speed and gain), and of course the removable handle that contains the two physical XLR connections and audio controls. There’s also an infrared mode, which can be engaged at the flick of a switch, ideal for when filming in environments with little to no ambient light. The battery life rating is also pretty impressive; the XA50/55 is able to continuously record 4K footage for around 2.5 hours on a single BP-828 battery. 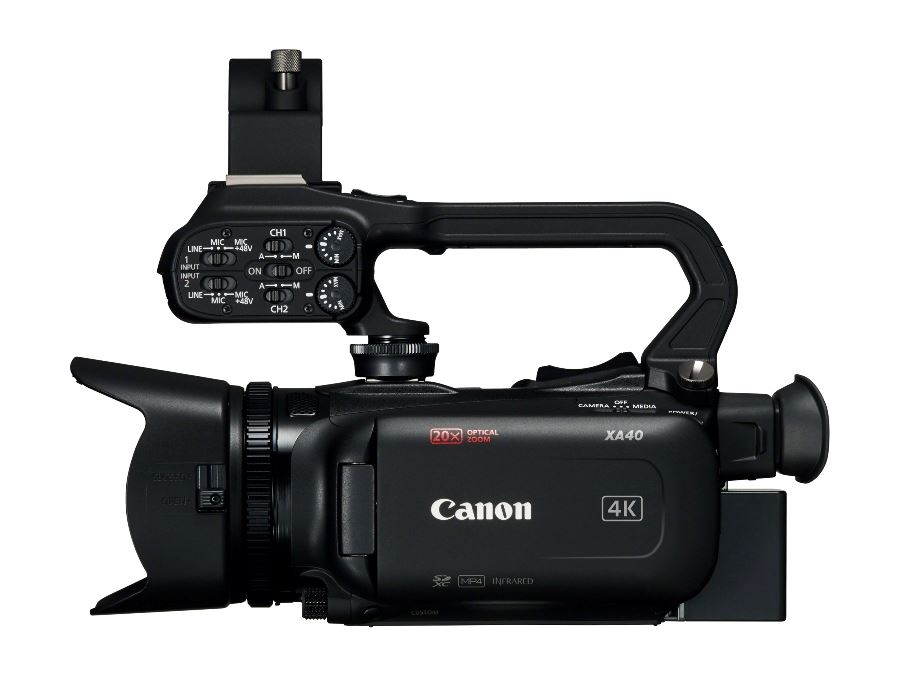 Specs at a glance…

The XA40 is the only camera in Canon’s refreshed 4K line-up not to feature a 1-inch sensor. Instead, it has a 1/2.3-inch CMOS sensor, which combined with the same DV6 image processor found in the XA50/55, allows the XA40 to record UHD 4K footage at up to 25fps in 8-bit 4:2:0 at 150Mbps. However, this is MP4 only – there’s no option to record to XF-AVC in this model. Again, if shooting in HD the full 4K sensor is oversampled to provide a superior HD image. The XA40 can record full HD at up to 50fps (no interlaced options) at a max bitrate of 35Mbps.

The smaller sensor does mean that the optical zoom range is much bigger on the XA40 than any of the other newer cameras in the line-up. It houses a 20x optical zoom range (equivalent to 29.3-601mm), which is optically stabilised. It has a single control ring on the lens, but unlike the XA50/55, the switch for changing the function between zoom and focus is located at the back of the camera. However, you still have the smaller manual aperture control wheel underneath the lens (that can also control shutter speed and gain).

The body is fairly similar to that of the XA50/55 and has a lot of the same features, despite its smaller size. One thing to note, however, is that this model does not have built-in ND filters. Instead, it just has a gradation filter that is either set to auto or off. Battery life on the XA40 looks to be the real headline winner, with a rated continuous 4K recording time of around 4.5 hours via a single BP-828 battery.