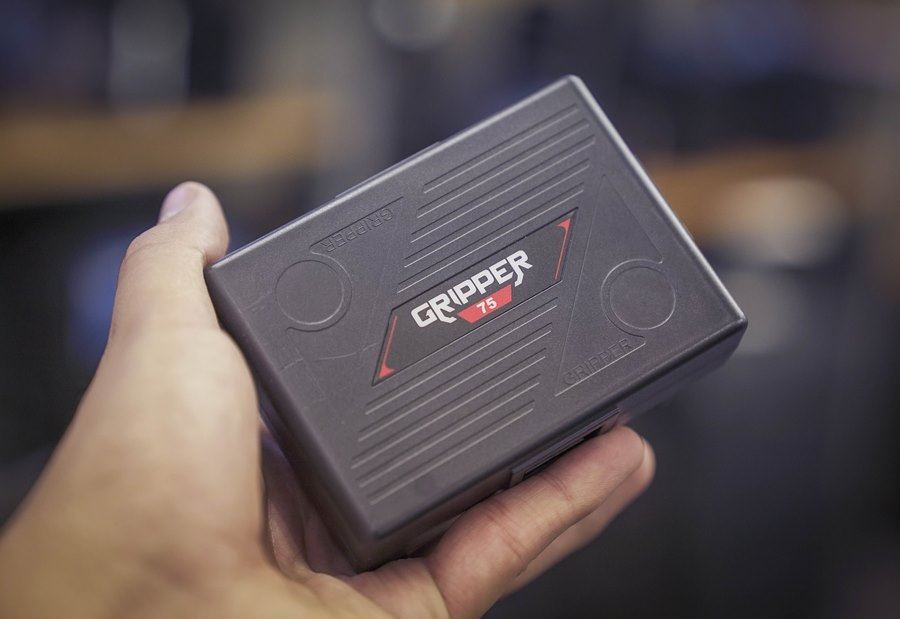 The Gripper battery is hailed as the world’s first clip-on battery system for 15mm bar rigs. To mount it, you need nothing more than the battery itself – a welcome feature when you compare it to larger batteries that require (mostly expensive) mounts to get them secured.

At first I was rather sceptical as to how secure the battery would be, since there are no clamps to tighten, no screws to turn – in fact, no adjustments whatsoever. However, I was pleasantly surprised by just how secure the battery feels once it’s in place. I’d happily put my faith in it to remain still and steady on the rails even during the most erratic camera movements, thanks to the rubber in-soles on the rail huggers. Relatively little pressure is needed to slot the battery onto the rails; just a firm press will get it locked into position. 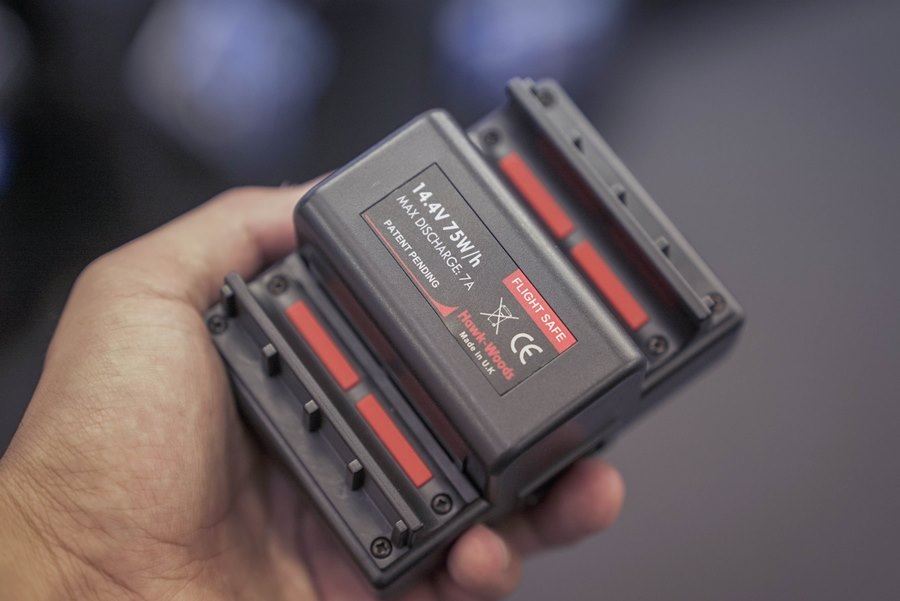 You’ll notice that the Gripper batteries have a relatively low profile, which should help with stability when operating a camera on the shoulder, aiding the user in achieving in a lower centre of gravity. For the larger cinema cameras, putting on a V-Lock battery shouldn’t greatly alter the camera’s balance, but when you’ve put one of those on cameras smaller than, say, a Sony FS7, you’re really going to feel the difference.

The battery comes in two flavours, 75W or 100W; both measure at 14.4V, support up to a 7amp draw and are flight safe. As a rough guide, the 75W battery will power a 10W camera for around 7 hours. Alternatively, it could power the Zacuto Gratical Eye EVF for around 14 hours. On the side is a four-LED power indicator, so you can easily judge how much juice you have left.

The Gripper battery utilises the widely adopted D-Tap ports for both of its connection points located at either end of the battery. To use the Gripper battery to power a camera, you first need to purchase a D-tap adapter to the battery type or DC input that your specific camera/device accepts. Since D-Tap is nothing new, there is are already a large amount of cables and adapters available on the market, powering anything from cameras to audio recorders.

If you need more D-Tap connections for powering larger rigs, then there is the option of purchasing the 4-way extension, which rather cleverly attaches to the 15mm rods in the same manner as the battery. For further flexibility, a D-Tap to USB adapter is also available for juicing up less power-hungry devices such GoPros or external audio recorders.

At first glance you do wonder why the connections are at either end of the battery, since if you want two connections at one time, the battery won’t be able to sit completely flush to the camera on the rig as the cables will be protruding.

However, it quickly makes sense once you have it rigged, as the two connections allow for the fast charger to be attached to one end, while the battery still powers the camera via the other – ideal if you want to top up your battery power without ever needing to power down the camera.

Alternatively, if the connections were at either side then the cables would most probably affect camera operation when on the shoulder, and no one wants a cable digging into their neck… 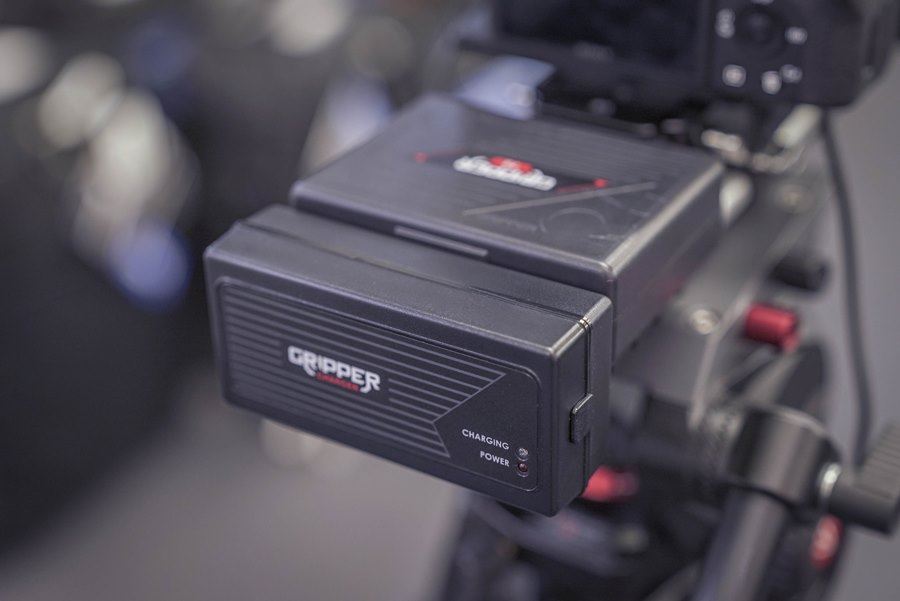 The Gripper battery with the single charger attached at one end, and the other end powering the Sony A7r camera

Is it worth it?

To get up and running with the Gripper system, as a basic starting point you’d need a battery, a charger, and a single D-Tap adapter for your camera. Using the example rig in the video above powering a Sony Alpha series camera, this would cost roughly around £380.

For the same price you could buy Sony’s multi-battery adapter kit that bunches 4 Sony NP-FZ100 batteries together, which combined equates to around 66W, slightly short of the 75W in the Gripper. You would also still need to purchase each of the 4 Sony batteries (£75 each), which brings the monetary difference at £380 for the Gripper and £680 with Sony’s adapter. 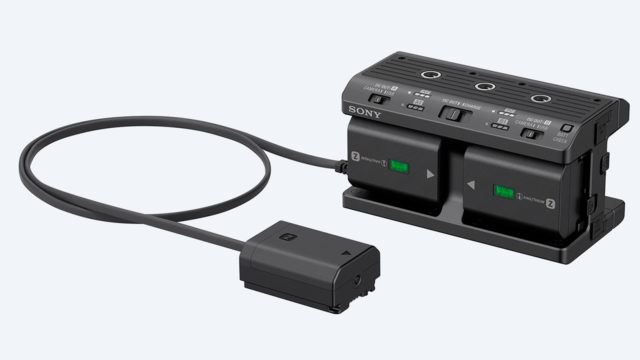 What about powering a larger camera like the Sony FS5? Well, if you were to go with the popular BP-U60 battery, which is roughly £280, 56W is what it gets you. So in terms of price per watt, it’s actually pretty similar to the Gripper system, coming in at around £375 once extrapolated. But, you don’t get the luxury of being able to power additional devices with this solution. This comparison favours the Gripper system much more should you go for the 100W battery.

Another big plus point for the Gripper system is that it isn’t just for powering the one brand of camera equipment, much like you would get with camera manufacturer’s equivalent own-brand battery. It will work with any device that you can convert to D-Tap, as long as it doesn’t exceed a 7amp draw.

Of course this all relies on the fact that you already have and shoot with a 15mm rail system. If not, then that’s another thing you’re going to need to invest in. If you do, then the Gripper system should be an ideal universal solution for powering your various filmmaking devices, from a manufacturer that’s extremely reputable in the world of broadcast power solutions. Plus it won’t hurt your wallet too much.