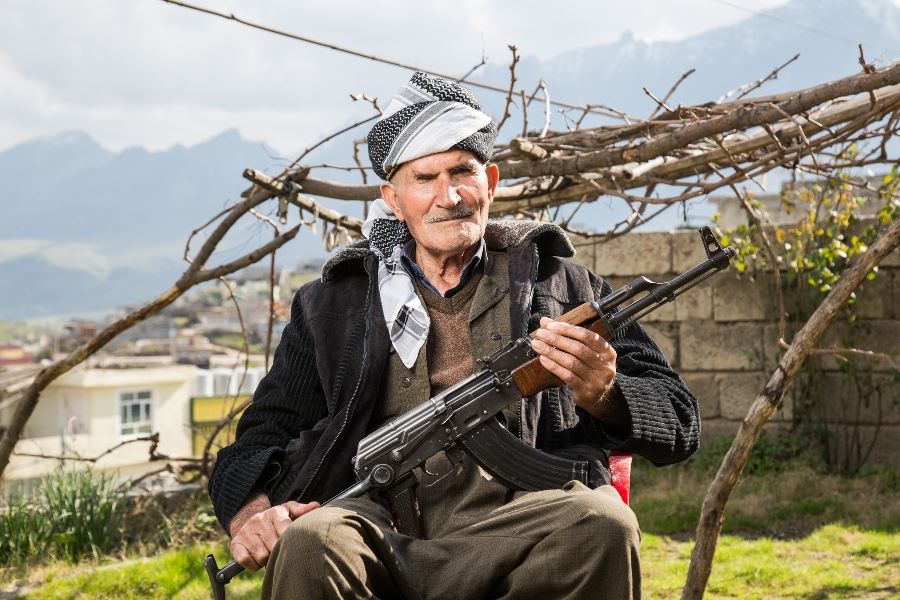 Not long after ISIS invaded Mosul, we were presented with the opportunity to film a documentary about the Iraqi Kurds. It was an exciting project and one that we did not want to miss. The area was getting a lot of media coverage at the time, and we got the sense that there was much more to the story than was being told. It seemed that the only thing standing between ISIS and the Western world were the Kurdish Peshmerga, but we weren’t hearing much about the citizens of Iraqi Kurdistan.

The documentary was to be an honest look at a people who had risen to prosperity from the horror of genocide, only to find themselves facing a new threat. It would be seen through the eyes of two young and adventurous British aid workers, Tom Badham-Thornhill and Jasper Hadman. The pair had been documenting the stories of the people they had met, while walking the 180km-long Hamilton Road, which stretches from Erbil to the Iranian border. Both Craig and I went out to Kurdistan, to continue what Jasper and Tom had started. 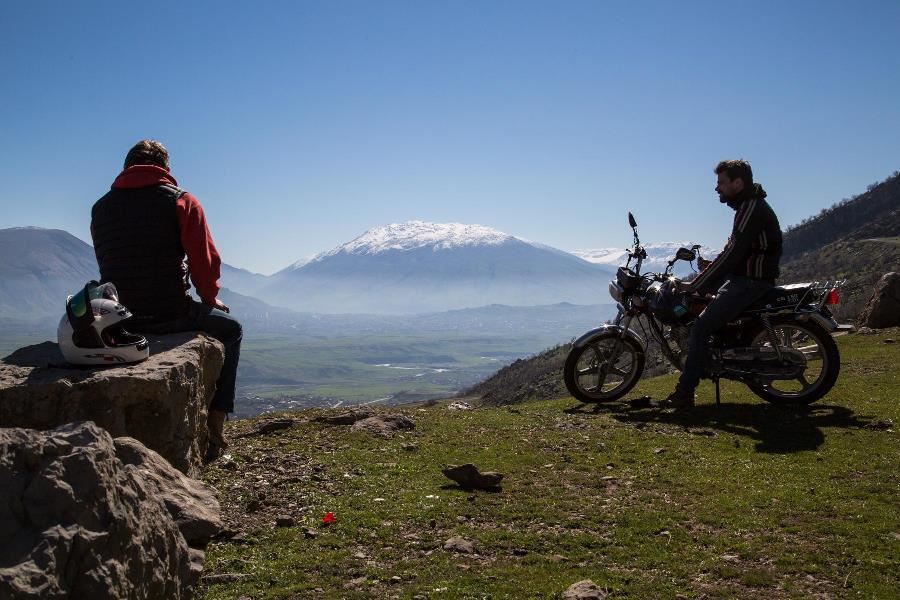 We needed to travel light and remain inconspicuous, while also ensuring we had the right tools for specific jobs. As is often the way when filming documentaries, we didn’t want to draw too much attention to ourselves, so we tried to blend in as much as possible. With a two-crew setup, it was generally a case of Craig as a single main camera (A) operator and me as the sound guy, with both of us sharing the role of a second camera (B) operator. 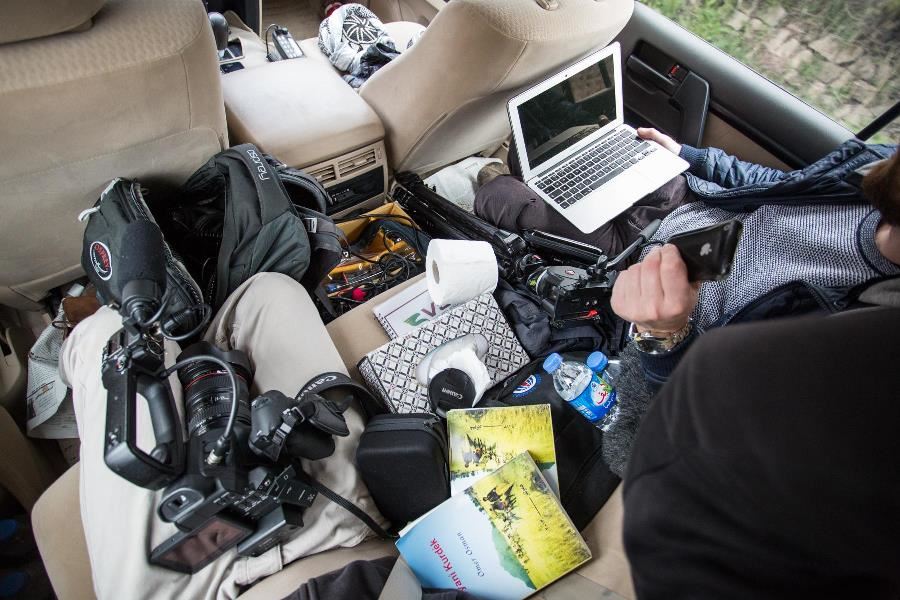 We settled on the Canon C100 as our main camera. It was the best of both worlds, near run and gun usability, while providing more of a cinematic image — long battery life, XLR audio inputs and in-camera ND filters were key for us too. For the B setup, we were after something capable of stills and timelapses, and good slow-motion. With that in mind, we decided to take a Canon 5D Mark III — a solid workhorse for stills, video and stills timelapses — with the addition of a remote timer/trigger. It also matches pretty well to footage from the C100. For the slow-motion option, we chose the Panasonic GH4, which gave us the benefit of 4K and proved great for some landscape shots and interviews. Lastly, we took a GoPro with us; we knew we wanted to capture some video/timelapse footage from travelling on the road, in particular from the motorbike that Jasper would ride for much of the journey. 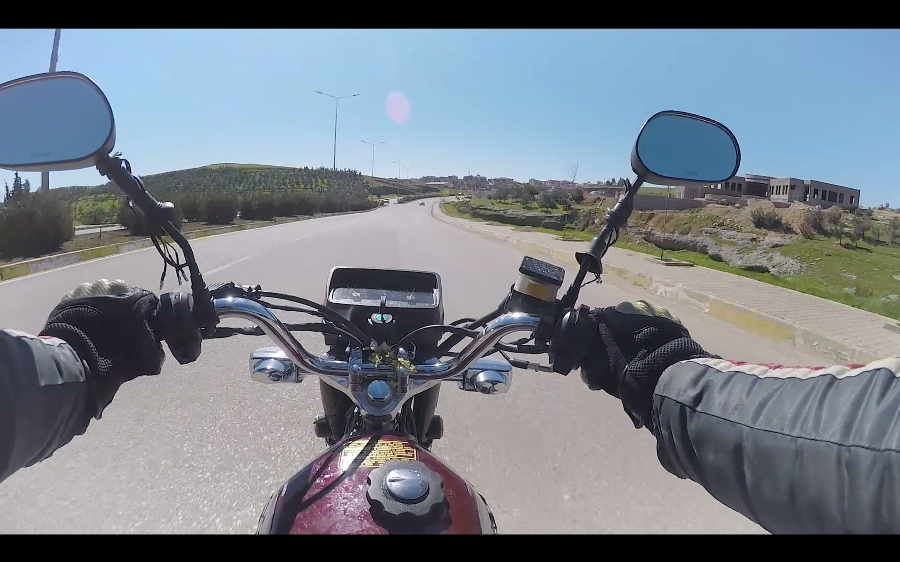 The GoPro obviously proved rather inconspicuous, as the high security meant that we were, at times, very restricted when filming. It turned out that this wasn’t a totally foolproof plan though, as the image (below) from a checkpoint shows! 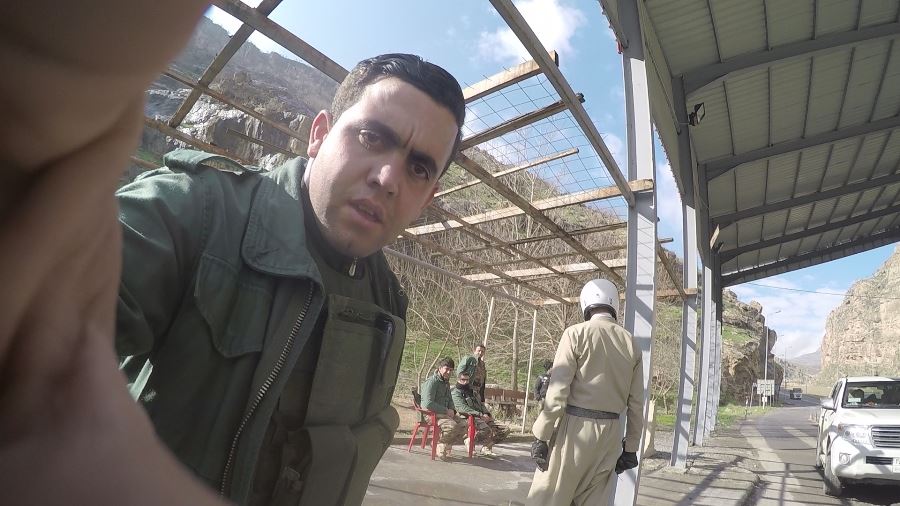 When it came to carrying gear, we needed to be able to throw things on our backs and move relatively quickly on the road. Craig used an F-Stop Loka UL, with one of its internal camera units. I had an Osprey Farpoint backpack, with an internal camera unit inside too. These were able to hold most of our essential camera gear; we only needed a separate bag for the audio kit. Our main tripod was Manfrotto’s carbon fibre MT055CXPRO3, with a MVH500AH fluid head. It was solid and sturdy enough for what we needed, while still being practical and lightweight.

When it came to the right audio equipment, we needed more options than the two balanced XLR inputs on the Canon C100. That said, we still wanted to utilise these as much as possible, to help streamline our workflow when it came to post-production. The appeal of the C100 was being able to use it as a run and gun camera. With that in mind, we chose to take the Tascam DR-70D four-track recorder with us, this enabled us to have four balanced inputs, record to an internal SD card, as well as take a stereo line out into the C100 for in-camera audio. Having extra inputs was helpful as it meant we could have lapels on two or three people (usually the two presenters, Tom and Jasper, as well as an interviewee) and then the boom mic too. In most cases, the lineout to the camera proved to be perfectly usable, mixing the audio live on the Tascam, but still having the back up audio with individual files on the SD card, if need be, in post.

This setup also meant that if it wasn’t always practical to run audio into the C100, we could just record the audio separately and have a reference mic on the C100. In some cases, when we didn’t require so many mics and wanted an even simpler setup, we could just run a lapel and boom straight into the C100. 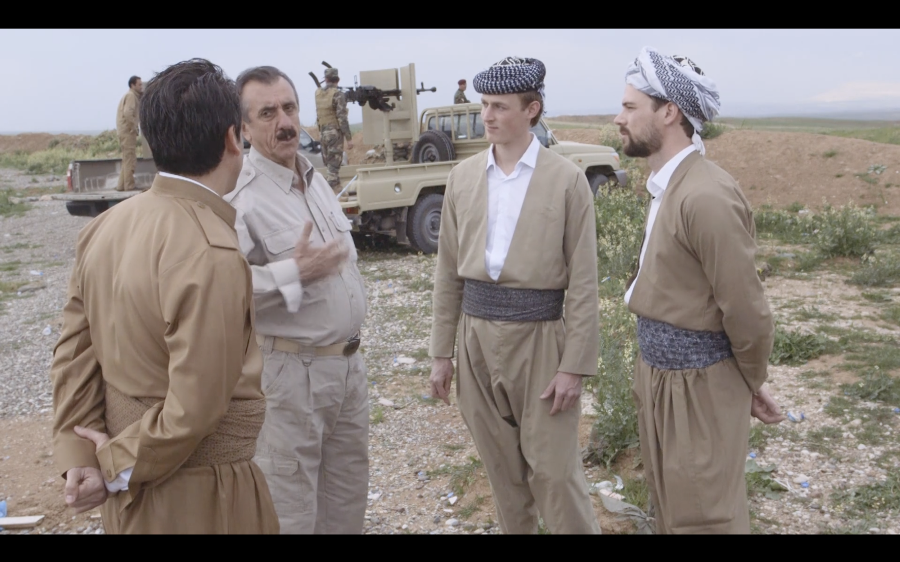 Filming in a conflict zone

Tom and Jasper had spent considerable time living and working in Kurdistan. This meant that they already had a comprehensive knowledge of the region. We were fortunate enough to be working alongside Rise Foundation, the local non-governmental organisation that Tom and Jasper work for. This provided us with a base, accommodation (during our time in Erbil), local knowledge and a small security detail. 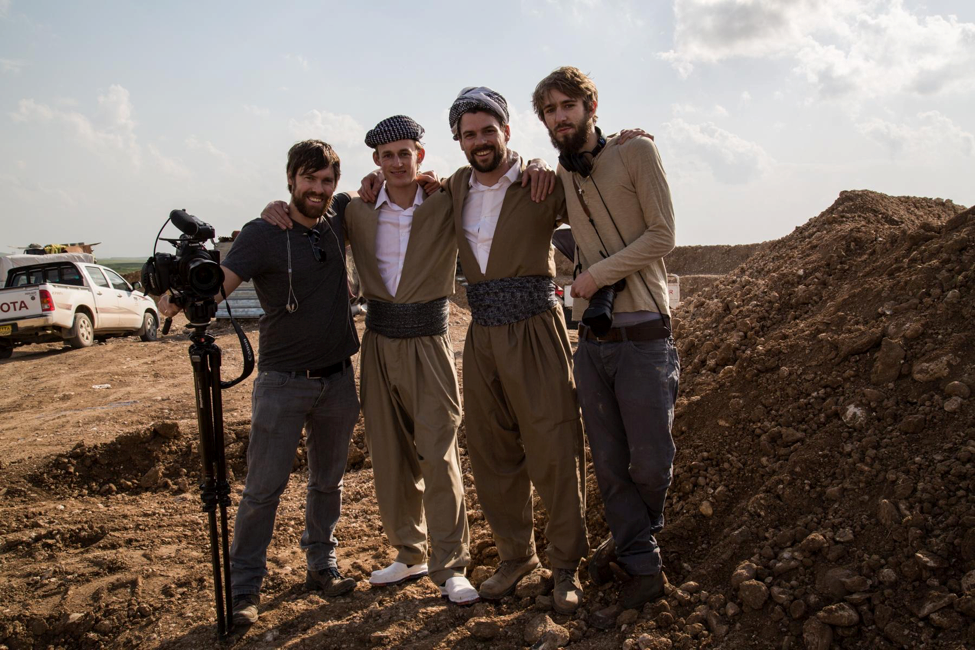 We would receive daily security alerts and updates, as the frontline between ISIS and Peshmerga forces changed regularly. Permission to film was also key, and through our fixers we secured filming permits via official channels. There has never been a more dangerous time for journalists, and the last thing we wanted to do was upset anyone.

Much of our access to the people we spoke with, be it military personnel, politicians or refugees, was a result of the relationships Tom and Jasper had already made during their travels in the region. This meant we weren’t forced to move from place to place seeking out stories; we knew we had a wealth of people to meet and stories to tell. In hindsight, perhaps we should have narrowed this down slightly and focused on the quality of what we were capturing, rather than the quantity. In this regard, it was quite relentless; we were always on the move. 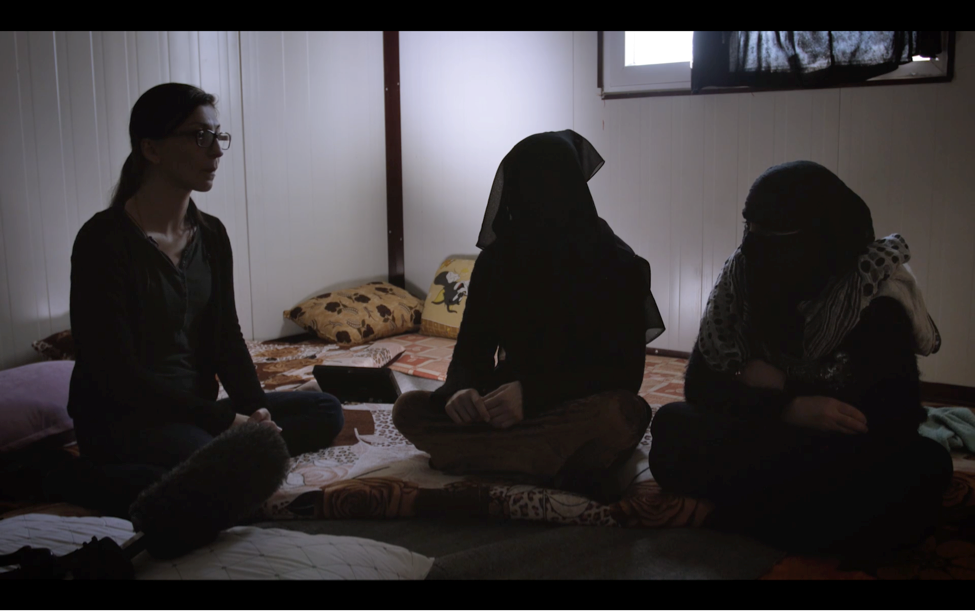 The level of trust established from Tom and Jasper’s ongoing relationships gave us access to places and people that wouldn’t have otherwise been possible. The interview we had with a couple of Yezidi women is a prime example of this. Tom and Jasper had a Kurdish friend who worked closely with Yezidi refugees, particularly girls and women who had escaped ISIS. This allowed us to interview two women who had been enslaved by ISIS; there were, of course, a number of sensitivities surrounding this.

For starters, we had to enter the refugee camp as inconspicuously as possible. We didn’t want to draw attention to ourselves or the women we were interviewing. When it came to the interview, only Craig and I were allowed in the room with the interviewees, along with two other Kurdish women who were helping them. We backlit the interview to help hide their faces, balanced a shotgun microphone on a pillow and had one of their friends mic them up. We shot in 4K, so we didn’t have to worry about changing up shots throughout. Basically, Craig and I tried to be as unobtrusive as we could, allowing their friends to conduct the interview to make it as much of a natural, stress-free environment as possible.

Hospitality is the Kurdish way, and that is exactly what we experienced everywhere we went. From refugees putting us up overnight, in their tents, to being served the most amazing platters of food and even having Peshmerga generals host us for tea! We experienced a people who had been continually oppressed, refugees who had lost everything and a region in economic crisis, yet each person treated us like a long lost member of the family. 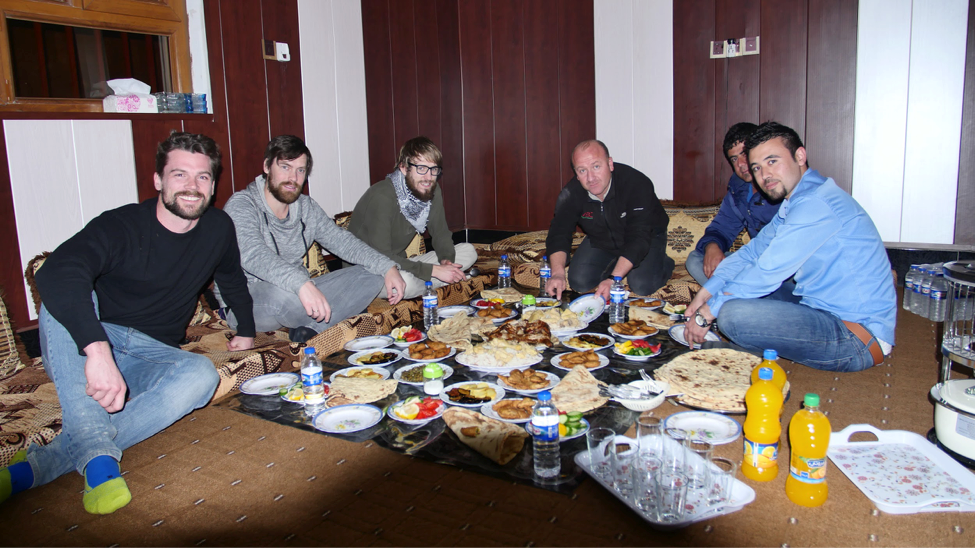 This was one area that could prove a bit stressful at times. Ideally, we wanted to keep everything stored on SD cards and backed up on two external drives, so we had to ensure we had enough cards. Constantly backing up footage and charging batteries meant plenty of late nights and early starts. But hey, this is the nature of the job. We had portable power packs to charge some batteries, but planning was still crucial, as sometimes we would be away from power for a couple of days at a time. Looking back, we could have done with a few more SD cards or battery/power options, but this was an independent documentary and we didn’t have an infinite budget. When I think of projects from back in the day — filming to DVCAM and HDV tapes and capturing through portable tape decks — these days, it's relatively straightforward to capture and manage raw footage.

We edited the whole documentary using Adobe Premiere and used After Effects for various titles. Regarding the grade, with the tight budget and the cutting between shots from four different cameras all the time, Lumetri was a really great tool for quickly and effectively matching shots as we went. We produce a lot of the music in-house at our studio facility.

The voiceover with the guys was also recorded at our south coast studio facility using a Shure SM7B microphone, Avalon 737 Channel strip into Avid Pro Tools software. We also used Pro Tools to do an audio clean-up, using an OMF we exported out of Adobe Premiere, as well as adding any additional foley, wild tracks and sound design. One of the most time consuming elements in post was finding native speakers to assist in making sure translations where accurate and the voiceovers matched up as well as possible.

This project ended up being a true adventure and one we certainly won’t forget. We set out to learn about a region that has faced unimaginable challenges in its history, but met a people who, despite their suffering, were incredibly hospitable and whose enduring spirit was truly inspiring. In capturing their stories, we made a real connection with those we had met, and left with a love and admiration for a people who we had heard of, but prior to our trip, knew very little about. We hope that the warmth and resilience of the Kurdish people has translated into the final film and that it is something they too would agree is a fair representation of Iraqi Kurdistan.

The documentary has received great feedback online, particularly among the Kurdish community, who have complimented us on how we have portrayed their rich history and culture.

That’s the biggest compliment we could have received.

Josh Eaves is a Shooter/Editor/Soundsman at Global Fire Creative. Contributions to this blog were made by Craig Johnson and Ross Gill, the Co-Founder and Managing Director of Global Fire.

Behind The Shoot: Filming Big Wave Surfers with the LUMIX GH5