Insta360 has revealed more details about its new Pro 2, at the 360-degree camera’s UK launch event 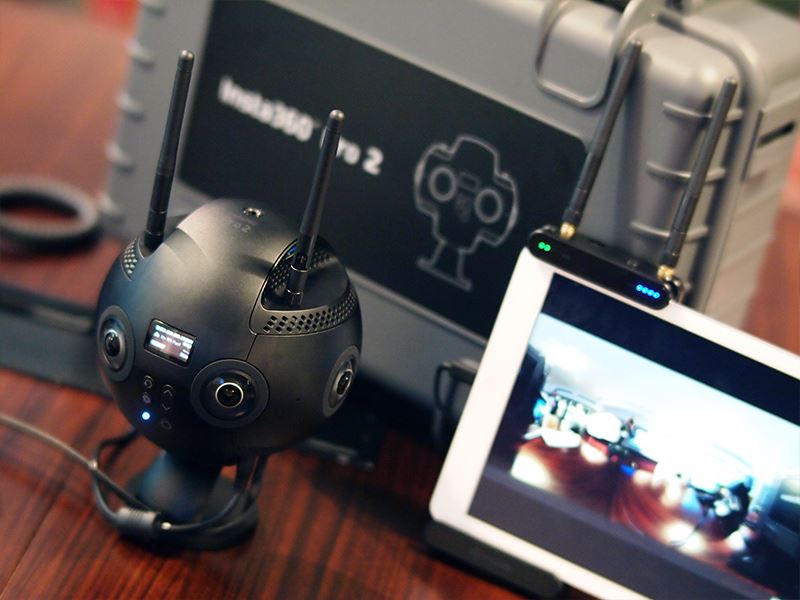 Yesterday, Insta360 hosted a UK launch event to really show off its new flagship 360-degree camera, the Insta360 Pro 2. This camera succeeds the already popular Insta360 Pro and features a six-camera array, which together, can produce 8K-per-eye 3D 360 video (a mouthful, I know…). If that wasn’t enough, Insta360 has somehow included built-in 9-axis stabilisation. In this article, we’ll provide a rundown of the Insta360 Pro 2’s key specs and what it means for us content creators.

The Insta360 Pro 2 has six sensors – all with fixed f/2.4 fisheye lenses – which is pretty much the same setup as the first model. However, while the Insta360 Pro was capable of capturing 3D 360 video at a maximum resolution of 6400x6400 pixels (30fp), the Pro 2 can now record 8K 3D 360 video at a resolution of 7680x7680 pixels (30fp). That’s a whopping 44% increase! The Pro 2 also builds upon its predecessor’s slow-motion capabilities and can now shoot 60fps in up to 8K Mono 360. If you drop that resolution down to 4K 360 (2D or 3D) then you can now record 120fps, as opposed to the 100fps on the previous model. All the video recording modes are still in 8-bit, it seems that we are still a while off from widespread 10-bit 360 videos capture (can you imagine the joy of editing that?), however, what is good to see is that Insta360 have upped the bit-rate of each of the six cameras recording capabilities to a much healthier 120mbps.

For the stills side of things, the Pro 2 now has an upgraded 12K (12000x12000) super-high-resolution shooting mode that equates to capturing a massive 144MP image. Both the stills and video shooting modes have a High Dynamic Range function too, with the stills side using the typical bracketing technique to achieve this, and oddly same goes for the video. At the event the rep explained that whilst shooting in HDR video at 30fps, what will actually be happening is that the Pro 2 will shoot at double the frame rate so that it can allow for half of the frames to be exposed slightly different to the other set, in turn capturing two sets of exposed frames to create that HDR video. There is also now the inclusion of I-log too, which is the Insta360 offering when it comes to flat Log profiles for grading in post.

Probably the most exciting upgrade the Pro 2 has to offer is its built-in stabilisation. Before you ask, no, its not all software based. This is a mechanical gyroscope that measures movement on nine axes. Combine this precise measuring of movement with the Pro 2’s ability to capture footage from every direction and you’ve got a camera package that can intelligently reframe footage to stabilise shots, without losing any detail.

One of the biggest problems that 360-degree shooters face is trying to create dynamic movement in their shots, but from the test footage we’ve seen from the Pro 2, this looks to be a problem of the past. You could easily have this rigged on a monopod while walking (as we’ve seen in the test footage) and still get silky smooth shots.

Like its predecessor, the physical build of the Pro 2 resembles a smiley face (you can’t unsee it!). However, we’ve now got two large Wi-Fi and GPS antennae mounted on the top too. Now, I don’t want to dwell on the common issues we face when shooting 360-degree video, but a rather annoying predicament is how do you hide the crew or director when you’re shooting 360-degree content? And, even more importantly, how do you monitor your shot?

We could get silly and talk about the development of advanced live 360-degree crew-masking techniques, but a much simpler solution is to move the crew far enough away, so they’re now completely out of shot or indistinguishable. The large WiFi antenna substantially increases the standard wireless monitoring capabilities of the Pro 2, however ideally you’d want to be using the new (and included) wireless transmission system hardware that uses a technology Intsa360 are calling FarSight. This system comes with an additional transceiver that mounts underneath the Pro 2 (on whatever stand you’re using) and allows wireless low-latency 1080p transmission at 5.18GHz (a fairly vacant transmission band) transmitting up to 300 meters ground-to-ground and up to 1000 meters ground-to-air to your phone, tablet or computer for full control and real-time monitoring.

Of course, it can’t just be one way. There’s also a dedicated receiver with a battery that lasts three hours per charge, which attaches to your preferred device to make this possible. Of course with most new digital transmission system, FarSight will be constantly looking for the clearest and strongest frequencies to operate on within its band (much like what Sennheiser’s AVX microphone system does), and will automatically adapt and switch over when it's needed.

The Pro 2 can live stream 4K 360 content (both 3D and 2D) directly from the unit itself (RTMP, STSP, HLS), all you’ll need to do is get it connected to a network via the Ethernet port, configure your stream information and thanks to its built-in server away you go. The real thing to note here is that with the Pro 2 you can stimulatingly record 8K 360 content whilst live streaming at 4K – so you’ll never need to sacrifice on quality when it comes to editing streams/shows post-live.

Another new innovation from Insta360 is a clever piece of software they are calling CrystalView. In general, it’s much easier to figure out ways in which we can capture and record bigger and bigger resolutions (hence why we’re talking about 8K video), but what’s not so easy is displaying it. Most VR headsets and mobile devices capable of playing VR content will be able to display at best 4K content, and this is the problem that Insta360 are solving with CrystalView. CrystalView is in essence a video player that’s integrated into the free Insta360 playback apps, it detects what the viewer isn’t looking at in a 360 environment and performs real-time downsampling of that portion of the content. This makes handling those huge 8K files possible on standard consumer devices, so anybody can enjoy that beautiful, high-res VR project you’ve been painstakingly working on.

But wait, it's only a 4K screen on my consumer device so how can I enjoy my 8K 360 content on it you say? Well, when we talk about the resolution of 360-degree video we’re describing the resolution dedicated to capturing the full 360-degree sphere that will ultimately be wrapped around the viewer using a VR headset. At any given time that viewer will only be looking at roughly a 16:9 window, depending on the viewing angle of your VR headset this would typically equate to on average one-quarter of the full 360 image. So, that 8K content pretty much becomes 2K at any given point on your smartphone or dedicated VR headset, which of course you're 4K screen will have no problem displaying in full res.

There’s not much point in capturing 360 content to immerse your audience if you’re not capturing the audio to go with it. Which is why we’ve seen the same four-microphone array in the Pro 2 than in its predecessor, together these microphones create the Ambisonic audio file, so when you view your content in VR and turn your head the audio will automatically follow to represent where sound sources are within the 360-degree environment. If you’re a video professional, however, it’s drilled into you to never use the internal microphones on your camera, and although Ambisonic field capture is a completely different game, Insta360 have provided an easy mounting point on the top of the body so you can attach third-party dedicated audio solutions.

Adobe Premiere editors rejoice – you’ll be able to natively edit your Pro 2 360 footage without having to do any stitching beforehand. Big file sizes can be a bit of a pain when it comes to 360 content (there are six cameras after all), but it seems that Insta360 and Adobe have adopted the same approach to what we faced when our computers couldn’t handle that exciting new 4K footage – and that’s the use of proxies.

While you’re capturing 8K footage, the Pro 2 will automatically create a lower-resolution proxy file in real-time. So, when it comes to the editing suite, the Insta360 plugin for Premiere will automatically detect and use the lower-res file for editing. However, when you come to export your video, Premiere knows to use the master 8K files.

The Pro 2 records the high-resolution rushes from each of the six cameras to their retrospective micro-SD cards, whilst the master low-resolution proxy file is recorded to a dedicated SD card. Thankfully when it comes to transferring these files you don’t need to do this card-by-card, you can simply plug the whole unit in and transfer the lot in one go. If you’re not an Adobe Premiere user, then unfortunately we currently don’t have an official date as to when you can expect integration with other NLEs, but I’m sure it won’t be in the too far distant future as this seamless post-production workflow is something that Insta360 really want to push with the Pro 2.

It’s clear to see why the Insta360 Pro was such a hit with content creators, it was straightforward to use and it produced fantastic quality video, especially for its price compared to its competition. The Pro 2 really builds on that success allowing for bigger and better 360 footage, the ability to move the camera smoothly, and a seamless way to work with that content directly in Adobe Premiere. Don’t get me wrong, the Pro 2 is likely to never be a spontaneous on the spot buy, this tool has been made for professional content creators at front of mind , really those who are looking to step-up their 360 game without the hassle of rigging up multi-camera rigs and fiddling endlessly in post to get it to look right. The Pro 2 offers a simplified solution to capturing, streaming, and delivering 360 3D content all in one sleek droid looking ball. The Intsa360 Pro 2 is due to start shipping mid-September 2018.