Is the Blackmagic Video Assist 4K Now the Best-Value Monitor/Recorder?

With strong competition from Atomos and SmallHD, does the Video Assist 4K have a seat at the table? 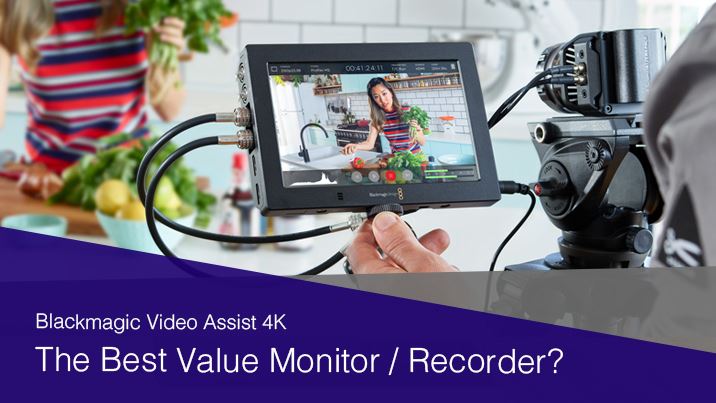 The Blackmagic Video Assist 4K isn’t a product that’s new to the market – in fact it was released in 2015, which makes it old news considering the rate at which technology moves in this space.

As an external monitoring/recording tool, the Video Assist has been largely operating under the shadows of the more established competition from the likes of Atomos and SmallHD.

However, in the background Blackmagic Design has been constantly working to bring new features to its recorder, with various updates being released over the past three years.

In late June 2017, we received firmware version 2.5 (available for Windows and Mac), which I believe now brings this recorder to a level that makes it hugely competitive to its rivals. Version 2.5 brings the most useful tools one would want when it comes to external monitoring, and that’s the staple of waveform, RGB parade, vectorscope, and histogram.

This blog isn’t a review, since the Video Assist 4K isn’t anything new, but more of a comparison piece in reflection of its latest firmware update. You can see a run-through of the features on the Blackmagic Video Assist 4K in the video below.

At its price of (for the sake of argument) around £650, I see its main competition to be the slightly cheaper SmallHD Focus, or the somewhat more expensive Atomos Ninja Flame.

The Focus is proving extremely popular with CSC/DSLR filmmakers, and it’s not surprising given its low price point, bringing much improved screen-size and brightness compared to the small and somewhat dim built-in screens associated with these types of cameras.

However, the Focus is just an external monitor – it has no recording capability –and this begs the question: is it worth spending slightly more for the Video Assist 4K?

For the extra £150 (let’s say) it would cost you to buy the Video Assist 4K over the SmallHD Focus, you would get the added benefits of a monitor that’s capable of recording up to 4K (UHD) 30fps at 10-Bit 422 in tried-and-tested ProRes and DNxHD codecs – a considerable improvement to the typical internal limitations of cameras of this size. In fact, at this moment in time, it’s only the Panasonic GH5 that can record 10-Bit 422 internally.

When it comes to professional audio on a CSC/DSLR camera, either you use an external audio recorder and then sync in post, or you’re lucky enough to shoot with a camera that has a propriety audio adapter, such as Sony’s K2M unit. Either way, each solution requires further investment.

On the Video Assist 4K you get the two mini XLR inputs, which can provide 48v phantom power and have an equivalent input noise floor of -128dBV for high quality audio recordings.

So what about the Atomos Ninja Flame? What extra features does it get you for roughly £200 more than the Video Assist 4K? That super bright 1500nit screen. There is no denying the quality of the screens of the Atomos recorders, allowing HDR monitoring even in the bright outdoors.

However, if you are willing to compromise on the brightness, the Video Assist will save you some cash, whilst retaining most of the features that the Ninja Flame can offer. The Ninja also uses the more expensive SSDs for storage, instead of the cheaper UHS-II SD cards that you’ll find on the Video Assist. You either have a HDMI version, or an SDI version of the Ninja flame, whereas you get both in the Video Assist. 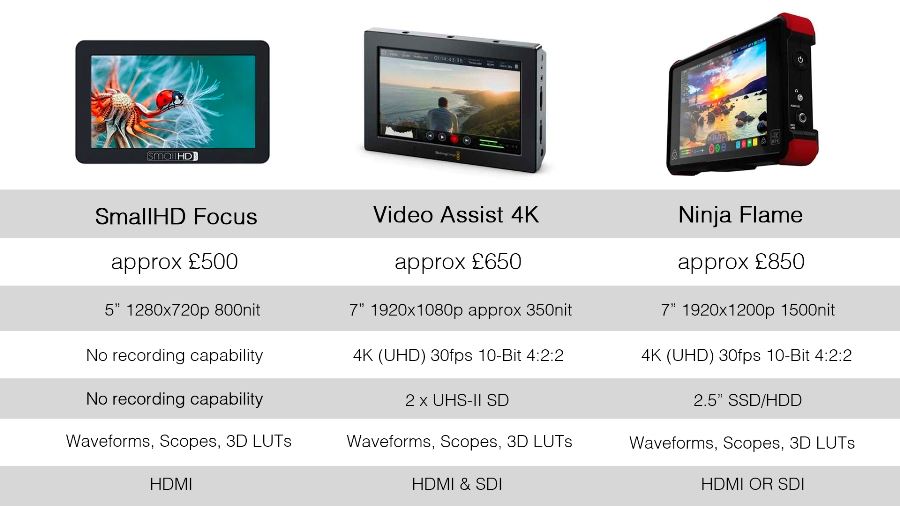 So from my point of view, the Blackmagic Video Assist 4K gives filmmakers the most functionality at the cheapest cost. If you’re in the market for an external monitor for your CSC/DSLR then upping your budget from the SmallHD Focus to stretch to a fully-fledged recorder that is the Video Assist 4K, is really going to open up your shooting possibilities with minimum spend – you’ve probably even already got all the SD card media to get you going.

Let us know what you think on Facebook – is the Blackmagic Video Assist 4K the best-value monitor/recorder?